Bright sunshine, temperatures around 40 degrees, and a bad case of cabin fever got me out of the house around noon for a walk.  No point in walking if I didn't have a large yellow litter bag and my grab stick, so duly accessorized, I walked down to the pullout at Tern Lake.

There are still huge snowbanks on either side of the highway, but the maintenance guys pushed the snow away from the shoulders a month ago, so the sides are clear.   The pullout is always good for a bunch of trash and I left two bags almost full there before I started the return walk.

Some chirping caught my attention half way home and at first I thought the yellow legged sandpipers were back.  Boy, I thought, they're going to be surprised.  The lake is still a block of ice.

Instead, as the noise came closer, I looked up from the ditch and saw two bald eagles land in trees about a hundred feet from me.   Then I looked higher.

Two huge golden eagles were circling a hundred feet off the ground.  I pulled the camera out of the safety vest pocket and tried my best to get a shot of those two birds rising hundreds of feet on air currents, never flapping their wings.  The bald eagles sat in their trees and watched, too.  I have a hunch the bald eagles might have approached too near the golden eagles' nesting area and been chased away.

I tried several shots of the golden eagles, but between the bright sunshine that made seeing the LCD screen impossible and constant movement, I never did capture an image.  I aimed the camera right at them and never got one.  Maybe they were ghost eagles.

The bald eagle closest to the road sat and watched.  It didn't even care that I was standing right across the road from it, and obliged me with a few poses. 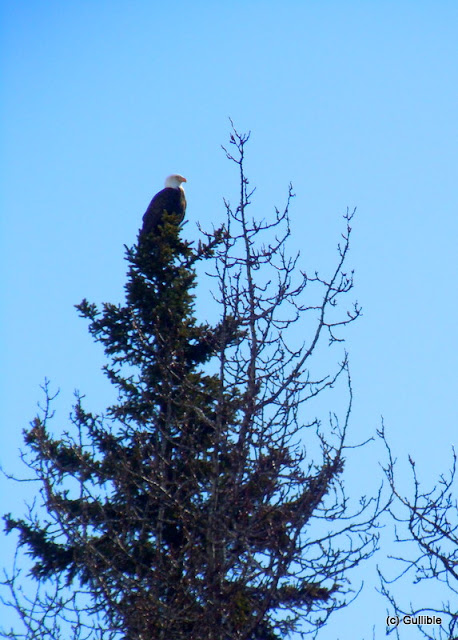 Now it's a quarter to ten at night and I'm heading to bed to continue reading a book that kept me up until 3 AM.

A quarter to ten at night, and it's still light outside.  Alaska.  Ya gotta love it.
Posted by Gullible at 11:11 PM