Your Federal Tax Dollars (NOT) at Work

Last summer a crew traveled the major highways of Alaska, financed with Federal tax dollars.  Their mission was to plant fluorescent orange "safety" poles on some of the more challenging curves along those highways.

Because I thought the poles ugly, I carefully avoided them while taking photos along the highway last summer.  I tried to find something nice to think about those poles and finally came up with, "Well, they'll help in the winter when it's dark so much of the time."

The crews that maintain the roads began using front end loaders to push the snow away from the asphalt a couple months ago.  This serves many purposes, such as making room for new snow to go when the sand trucks with their belly blades plow.

There's another reason, too.  Now that the snow is slowly melting, the melt water doesn't run across the asphalt and cause all kinds of dangers and problems during these continual freeze/thaw cycles.

Pushing that snow away from the road also reveals those orange poles for the first time since last November. 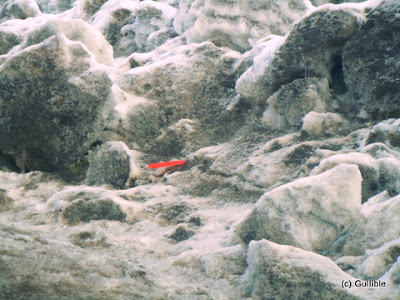 Lots of good they did.  I didn't like them when they went in, and I certainly don't like them all bent and pushed over. 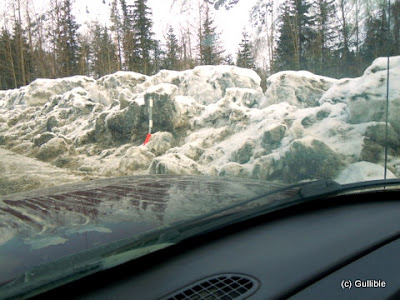 One reason I didn't like them to begin with:  on a recent trip to Anchorage, a distance of approximately 90 miles to the outskirts of that city, I counted more than 250 signs that drivers had to be aware of.  I'm sure I missed some that were buried by the high banks of snow.


That didn't include the culvert and guardrail flags, business signs, etc.  Just the signs that drivers needed to note.  And by the way, Alaska doesn't allow billboards.


It's no wonder drivers miss the important signs, like dangerous curves and speed limits.  We're suffering from sign overload.

We're also suffering from something else:  Just because it works somewhere else, doesn't mean it will work in Alaska.

There's an old Alaskan saying, "We don't care how they do it Outside."  (The "Outside" refers to anywhere outside of Alaska, but generally refers to the other states.)  It might sound flip and obstinate, but there's much wisdom behind that saying, wisdom gained from many years of living and surviving in a harsh and unforgiving land.

And without fluorescent orange poles.