The India Journals, Ch. 10, Later in the Kolkata Morning

Ch. 10, Later in the Kolkata Morning

You get educated by traveling. – Solange Knowles

One of the things I love about traveling is running smack dab into history, even if—as is the case with India—my knowledge of that history is woefully inadequate.

Whether is be Aryans (Indo/Iranian or Indo/European), Persians, Greeks, Chinese nomads, Arabs, Turks, Mongols (Mughals(, Portuguese, British, or other assorted raiders, India has been attacked, invaded, occupied, and/or conquered for most of its history.    Even the Dutch and French came to India to plunder its riches.

Shortly after the Missionaries of Charities Mother House, our bus drops us off at an Anglican church called St. Johns. 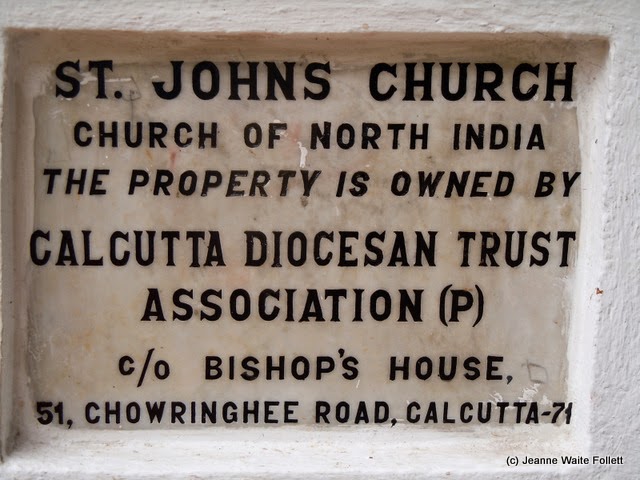 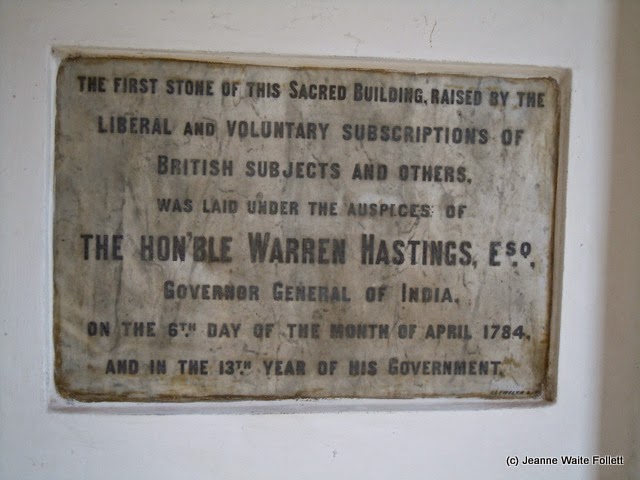 Ho, hum, I think as I pass the Doric columns of the stately portico and stop to read and photograph the informational plaques so I know where I am and where I took the photos.   Inside, a church is a church, even if this one is centuries old.   There are interior columns and I think these are Corinthian.   I'm showing off to myself, smug that I still remember from high school history classes the types of classical Greek columns, when it is actually a measure of how much trivia fills my brain.

On this particular day I can't remember the third type of column,  Ionic, so it's good the church doesn't have any. 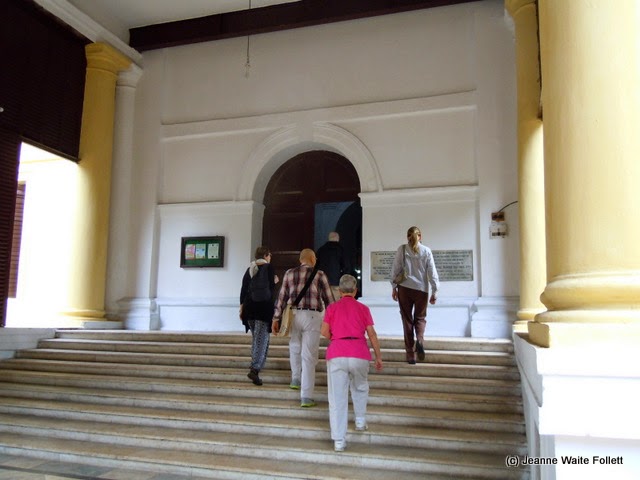 The seats in the nave, some with their original woven backs, get my attention, as does the sanctuary—briefly.  I tend to dislike ornate and expansive religious buildings, thinking the money expended could have been put to better use for the people.    Whatever deity the congregation prays to can hear just as well in a humble church. 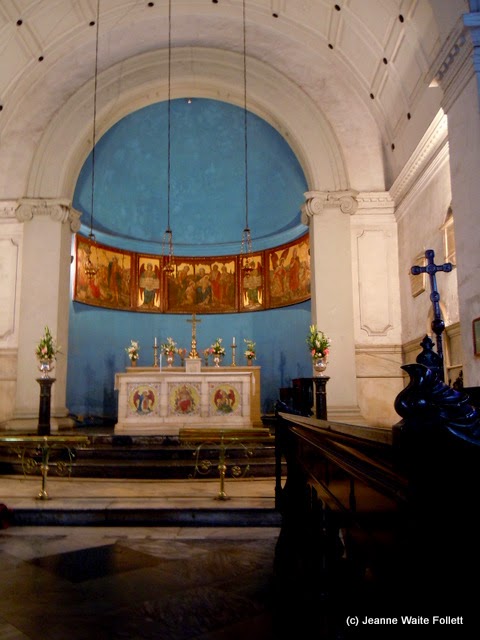 So, I cross the transept, looking for a painting that is the church’s pride.   Painted by Johann Zoffany, it is a representation of Leonardo da Vinci’s Last Supper, but with an India twist. 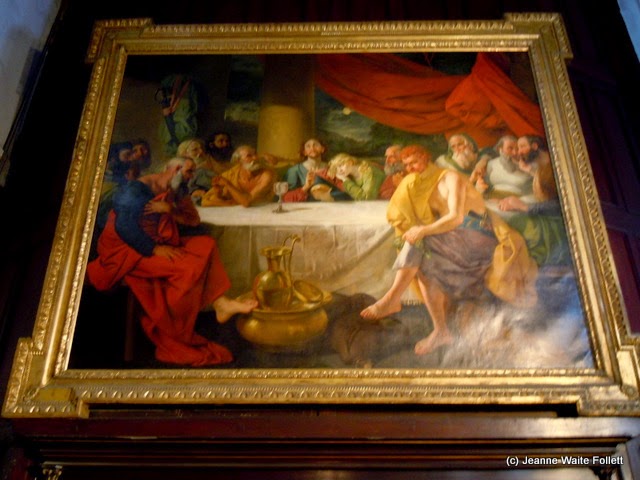 For information on this painting, see:   http://en.wikipedia.org/wiki/St._John%27s_Church,_Kolkata 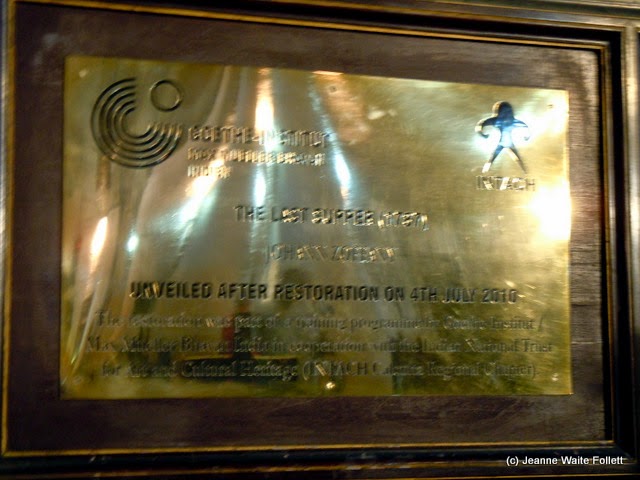 As long as I’m on that side of the nave, I wander down the aisle towards the exit, passing several plaques on the wall before I bother to read one. And that’s when I run into history and images flood my mind.  I read another plaque, and another, and more.   I imagine the native sepoy soldiers in red and blue and khaki with camels and horses and lances and curved swords, and British soldiers in white with pith helmets.

These are memorials to British soldiers and civil servants who died in service to the country during Britain’s long colonization of India.  ...killed by lightning…, ...died in 1857 during the Indian mutiny siege of Lucknow,   ...died in battle in the assault on the fortified heights of Malow and died leading the charge after killing the chief of the enemy.

I am moved by these plaques, thinking of the unknown people who mourned these fallen soldiers, and the men who fought them on the other side. These battles were monumental in British and Indian history and I walk away from the church with a new appreciation for India’s history and a need to learn more, especially about the siege of Lucknow.  (See the above link to read about a memorial to James Pattle.)

And, as long as we’re talking about the history of the British in India, our next stop is the Victoria Museum, originally built as a monument to Britain’s colony and to Queen Victoria.   This is from the Cultural India site: 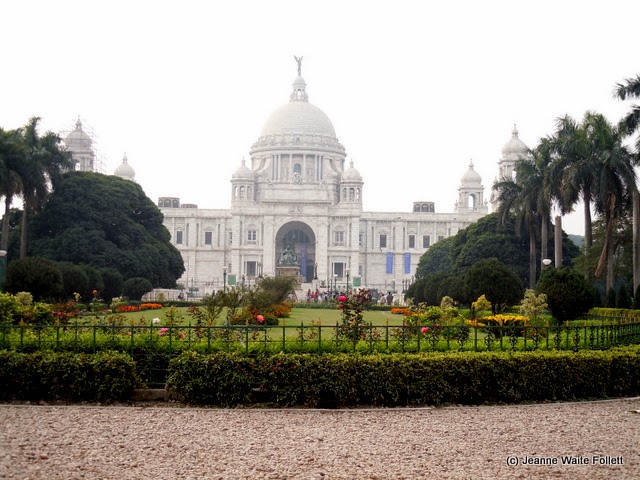 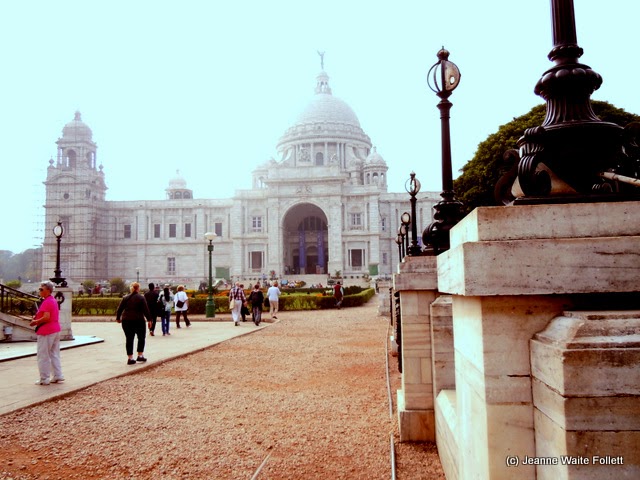 After World War II, a 16 foot tall bronze statue of victory was added to the top of the central dome. 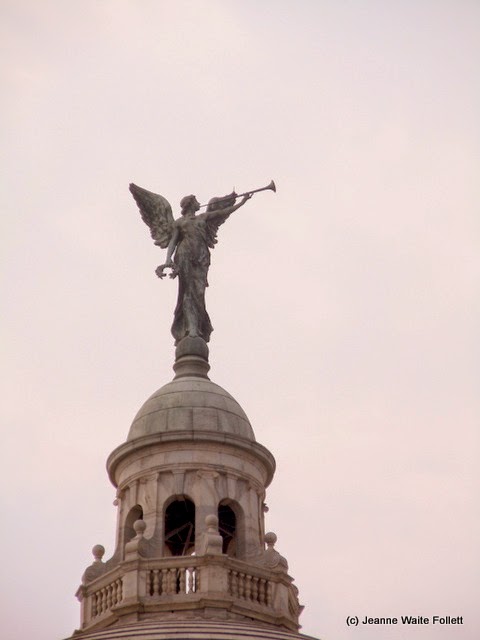 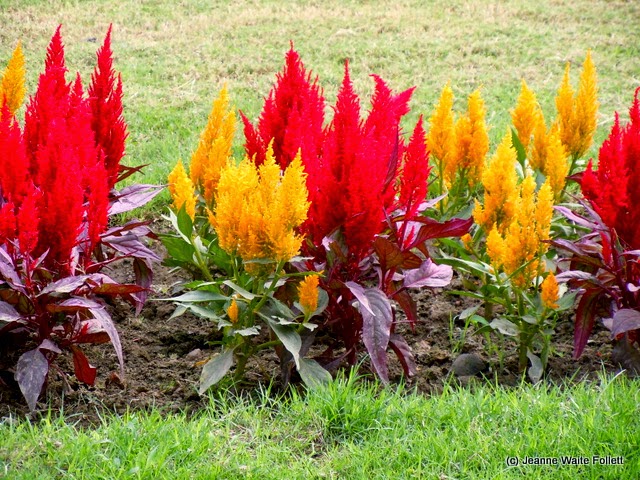 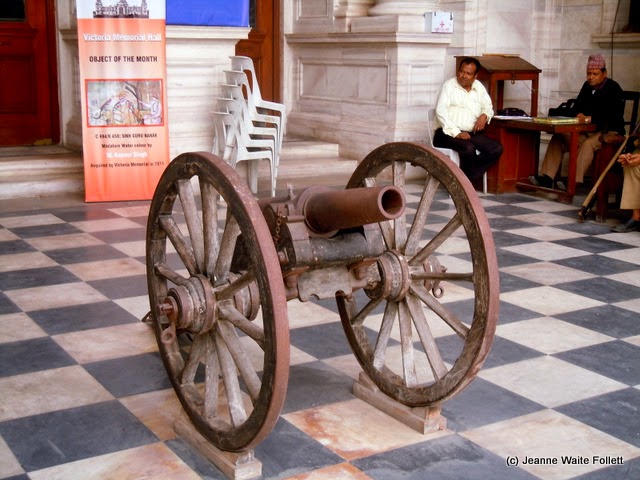 As I walk back through the immaculate grounds of the Victoria Museum,  I notice some restoration work occurring  on one side of the edifice.  A network of scaffolding is erected for the safety of the workers. 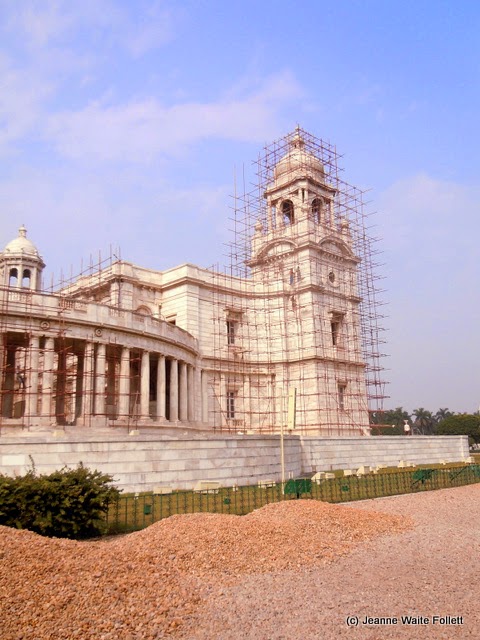 As I get closer, I notice that India has put its own stamp on worker safety.   Yes, the men are wearing safety belts attached to ropes, but.... 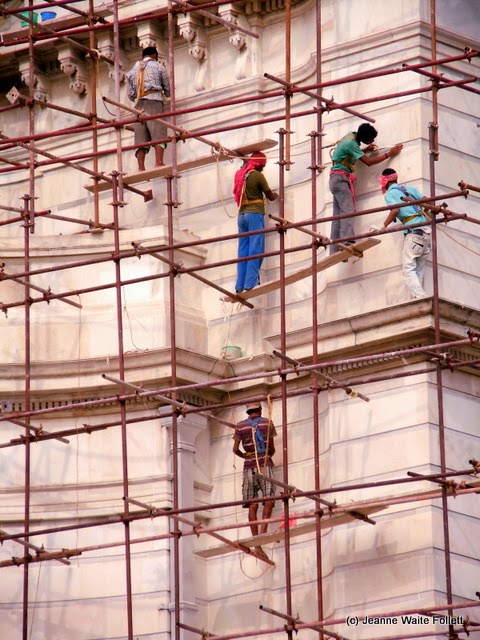 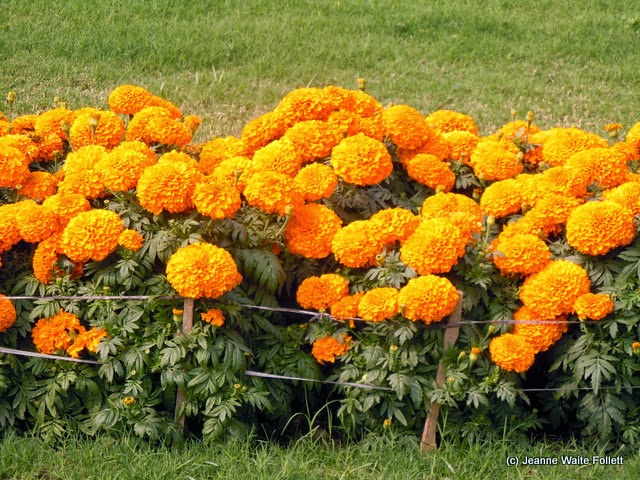 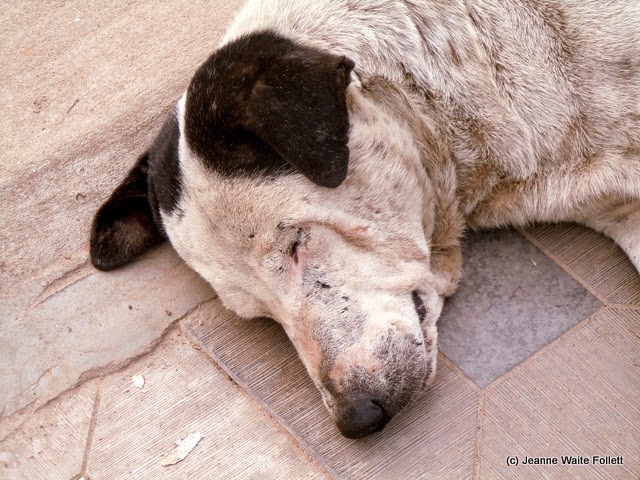 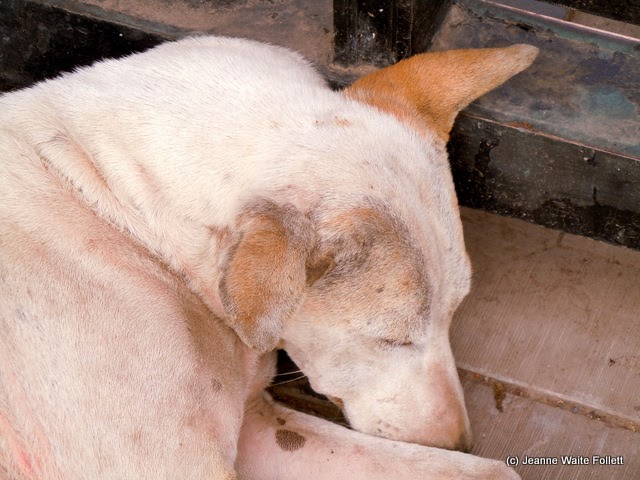 Then, the bus begins to beep and battle its way back to the Hooghli River through the mid-day traffic of Kolkata, back to the Ganges Voyager for lunch and the start of our cruise up the holy Ganga River.

And this is when the Hindu god of schedules and itineraries and timetables, assuming, of course, there is such a deity and it has a sense of humor, who heretofore had hidden its smile discreetly and smothered its giggles politely, has a great belly laugh at our expense. 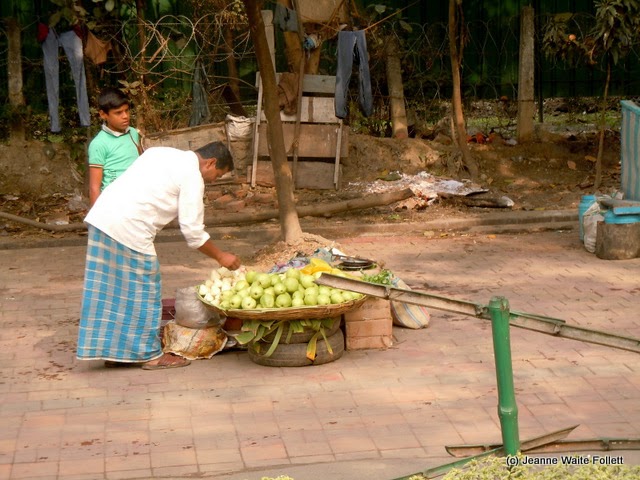 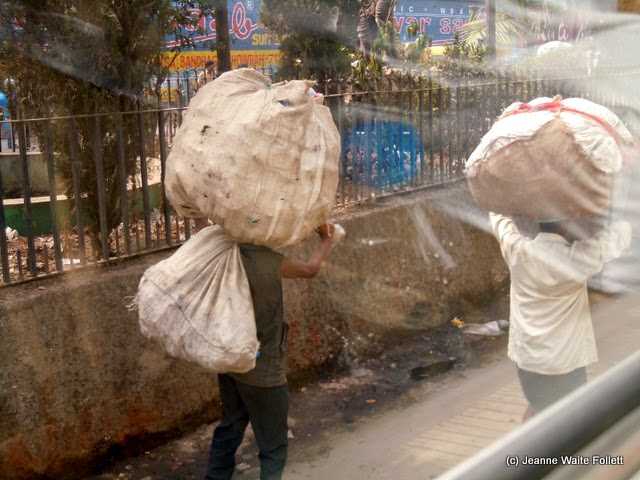 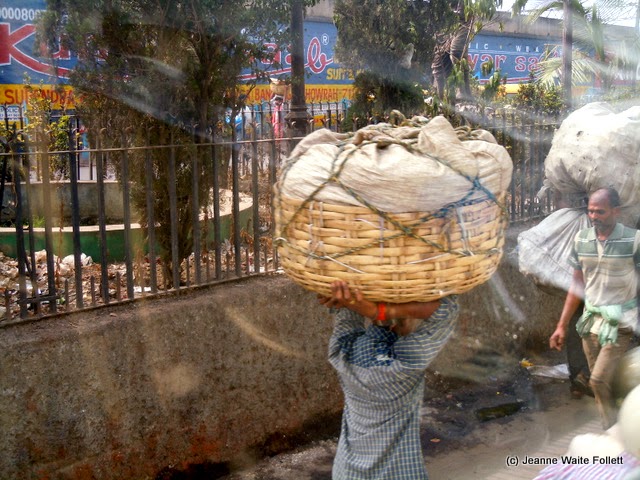 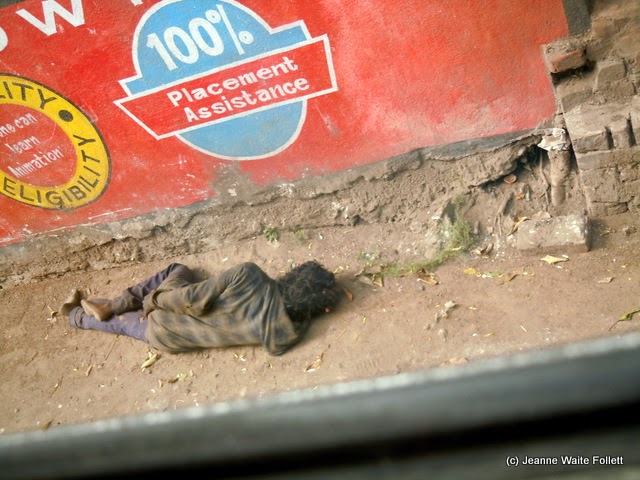 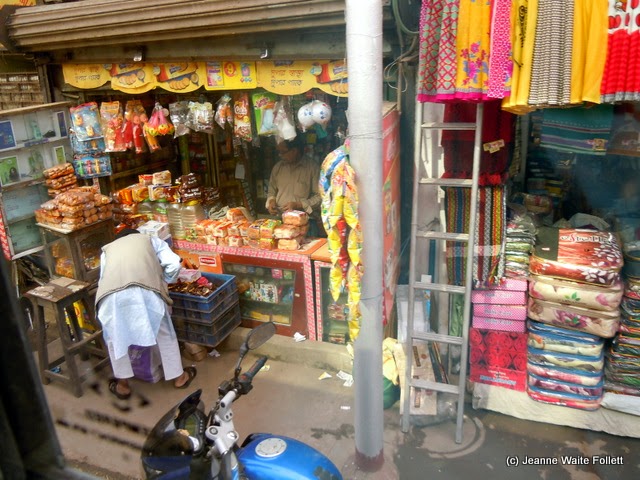 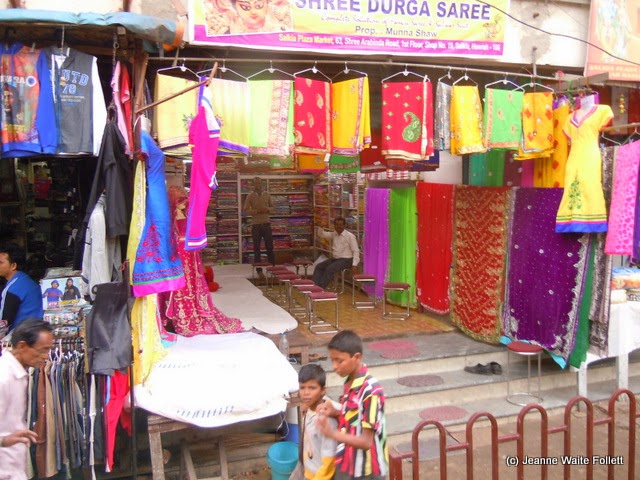 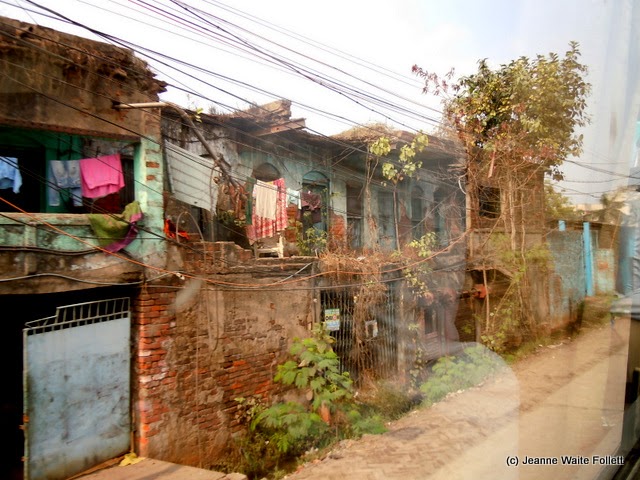 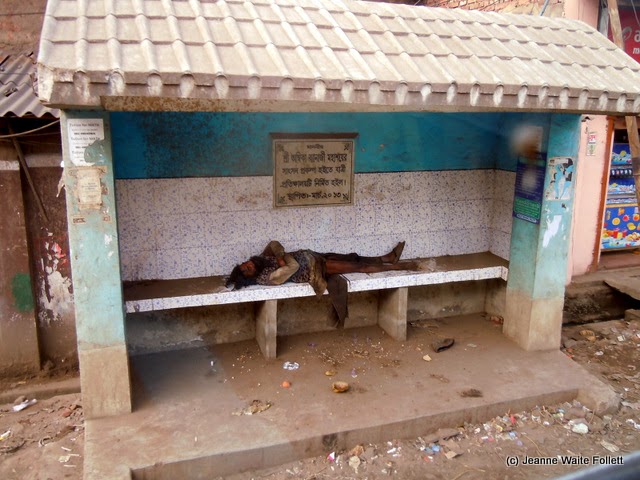 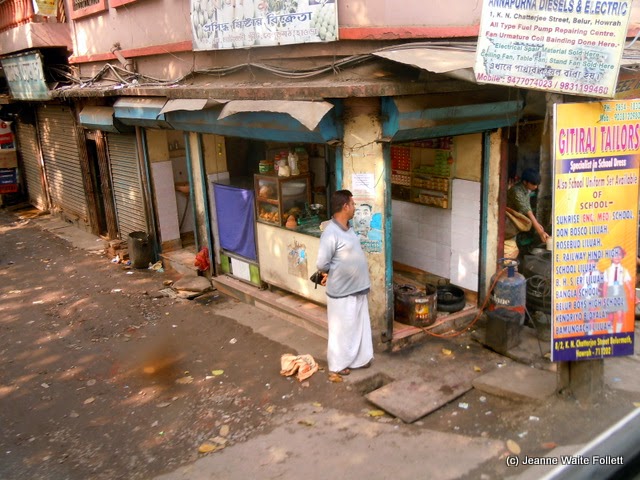 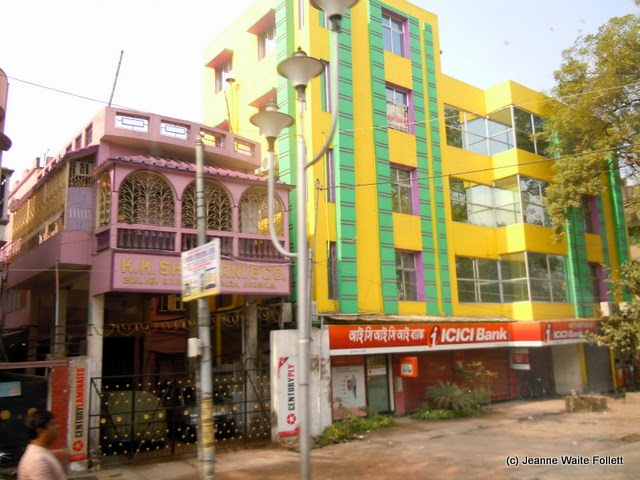 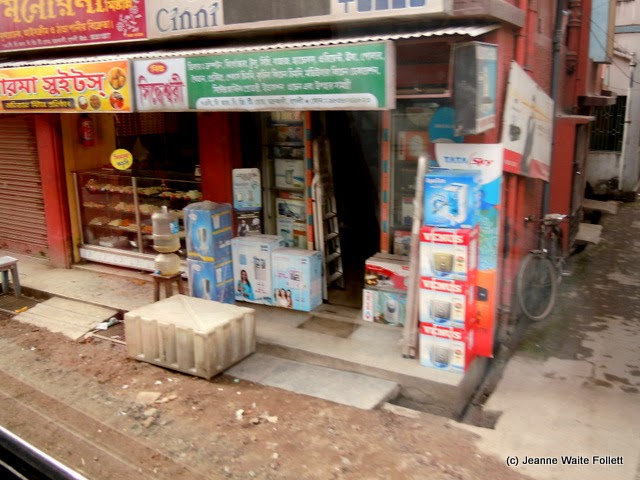