Indian road rules broadly operate within the domain of karma where you do your best and leave the results to your insurance company. —Coen Jukens


Oh, my, but this is going to be a long day.  Bags out in the passageway at 5:30, onto the country boat at 8 o’clock for a short ride to the pier where two passenger boats are tied up.   That forces the country boat to tie up on the outside of them.


Where I come from, the norm is for people to cross over the tied-up boats to the pier without trouble.   In India, with us, this involves a kerfuffle with the inside boat.   One of our guides gets into a long discussion with a man waving his toothbrush in the air.  The discussion heats up and the gestures get wilder.  As a result, we are slightly delayed in leaving the safety of the country boat.

Turns out, toothbrush man wanted money for permission to cross his boat.   He got none.

GUIDE SPEAK:  I was completely confused as to who our guides would be for the rest of the trip.  I turned to one of the guides, who shall remain nameless and asked.   Not seeing the man he wanted at the moment, he raised his hand to his neck as if holding a very full chin and said, “He is a little bit fatty.”

Ah, now I knew.   The Grumpy Guide, I called him.   I had yet to see the man smile, but admittedly have had little interaction with him.   He is always around, but I have no idea what he does.


On the river voyage, the 38 of us had been divided into three groups, the Siva, Dolphins, and Ganeshe.   In preparation for the land part of the trip, we are divided into Orange and Green groups, and tie a colored ribbon to our bags.   We board the coaches with the appropriately colored sign in the windshield and blast off through the early morning Kolkata traffic.


On arrival at the Kolkata airport, we have to show our passports to armed security personnel to get into the terminal.   After that, I lose track of how many security people check us before we finally get to our gate, where our flight is delayed from 10 A.M. to 11. 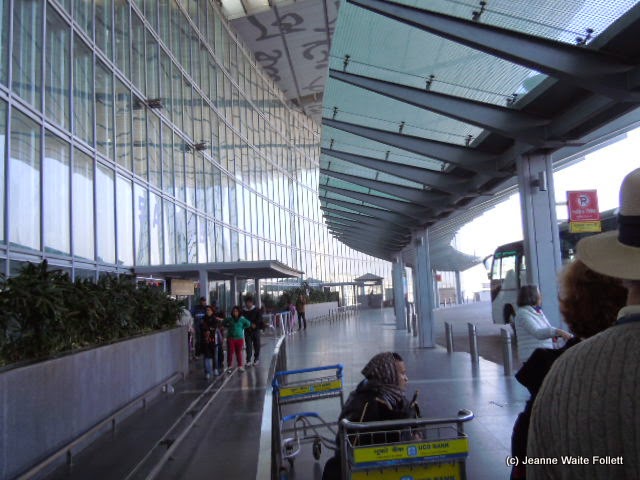 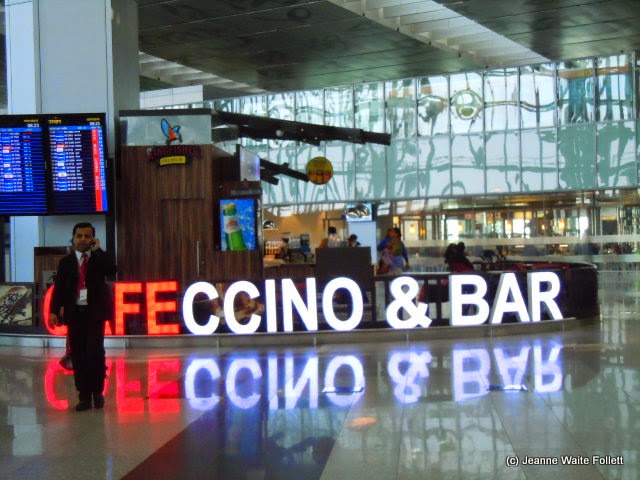 Once we arrive in New Delhi, we are supposed to go to lunch nearby.    Some want to bypass the lunch because Air India had fed us on the two-hour flight.  A vote is taken.  Lunch it is.  I’m glad, because, having run a restaurant, I know what it’s like to have a group cancel at the last minute. 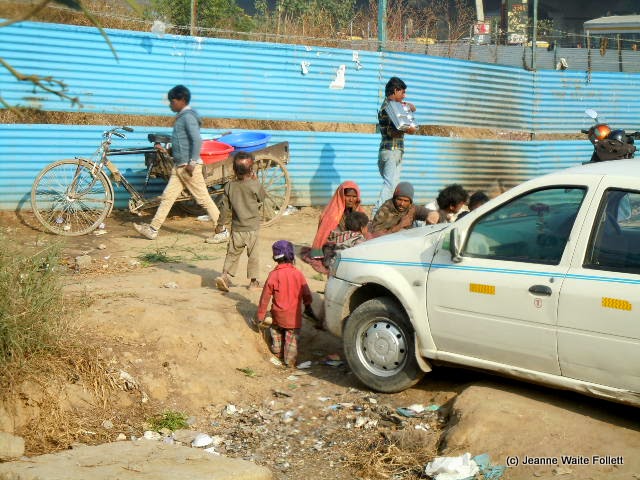 And so we walk into the splendiferous five star Radisson Blu Hotel for a phenomenal lunch buffet. 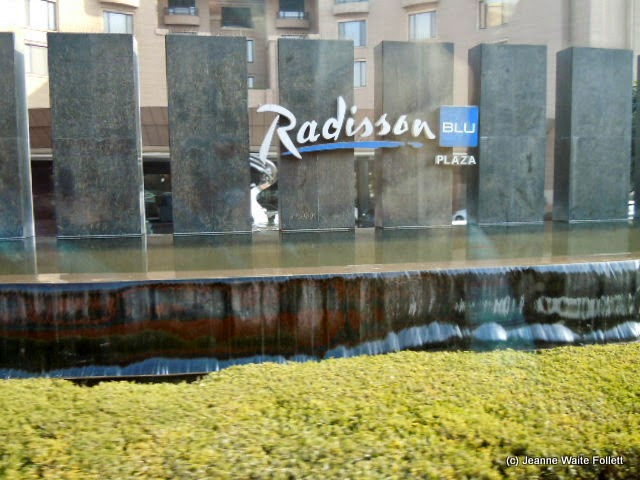 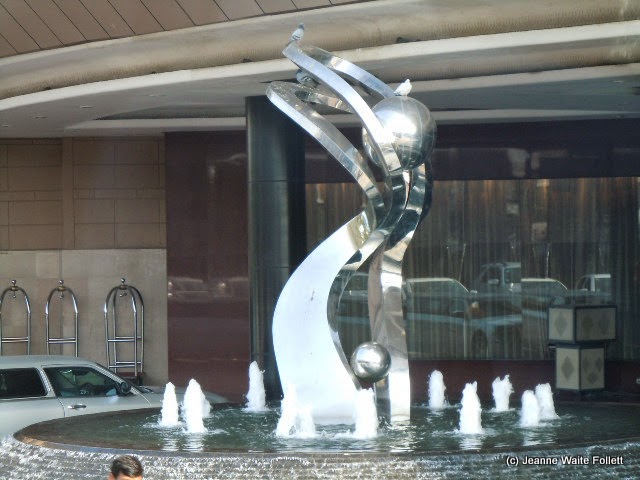 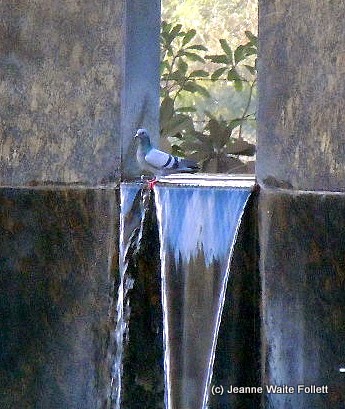 It’s 4 o’clock by the time lunch is over and we have a long five hour drive to Agra ahead of us.   But first, we inch our way through endless New Delhi traffic, watch buses duel to be the first bus to a designated stop, and listen to Grumpy Guide. 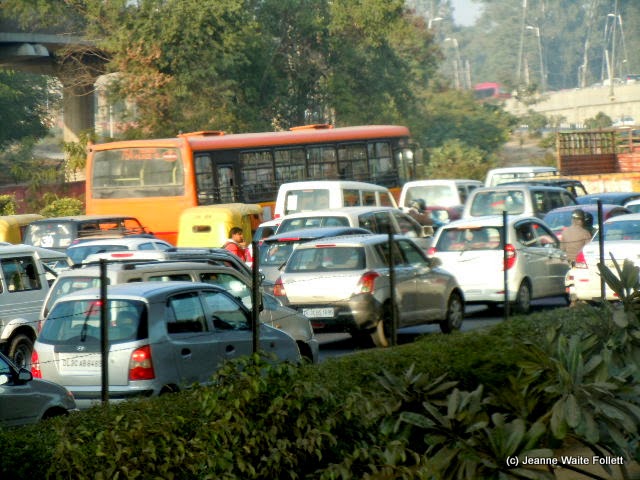 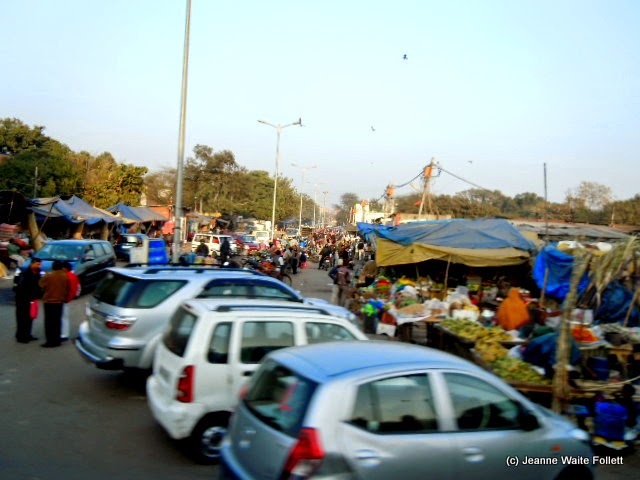 And, boy, am I ever wrong about him.   He rarely smiled, indeed, but he possessed a wry, sly wit and was filled with humorous anecdotes and substantial information about India.   He also spoke clear English and I rarely failed to understand him.   No wonder he’s been a tour guide for 25 years.

Many toys come from China made of durable plastic.   The toys don’t work long, but they last forever.
The cabs here run on natural gas.   If you get on one and the driver says the meter doesn’t work, get out.   You might see more of India than you wanted.

In India, there are 175 registered political parties.   You don’t cast your vote; you vote your caste.   People tend to stay with their own caste because they know they will be helped by them if they need it.

All Sikhs are Singhs, but not all Singhs are Sikhs.  (His name is Dinesh Kanyal Singh.  He is not a Sikh.)

After the USA, India is the largest democratic country in the world, and also the largest English-speaking country.

Almost all vehicles, including buses and coaches are standard transmission.   An automatic transmission in a car  costs $5000 more.   (This boggled my mind in this stop-and-go traffic.)


Finally, we leave the traffic behind.   It’s dark now and we’re rolling along on a two-lane highway in the country.  I see signs on the side of the road:  “No urinating.   Facility ahead.”   I also see what look like small tombstones partially buried in the sand just off the pavement.  They are markers for a buried gas line.   Hit one, and the tombstone is appropriate, I think.

We pull into a rest stop and I look around the convenience store for a snack.  I decide on a small can of Pringles.   Then we’re back into the black Indian night, rolling along, seeing few lights.

All of a sudden we are barreling through darkness at the speed of sound through ox carts, donkeys, cows, dogs, vendor stalls just a couple feet away, and all manner of conveyances (lighted and not), all beeping horns in numerous octaves.   The coach makes several U-turns, seemingly doubling back on the roads, before pulling into the hotel grounds.

So it is a wide-eyed bunch of tired tourists that gets off the coach, put our hand-carries on a scanner belt, go through separate lines for men and women to be wanded, and enter the fabulous lobby of the ITC Mughal, a five star hotel.

We are now in Agra  where I will get the two biggest surprises of the trip, one good and one bad.


Photos of the fabulous hotel in Agra: 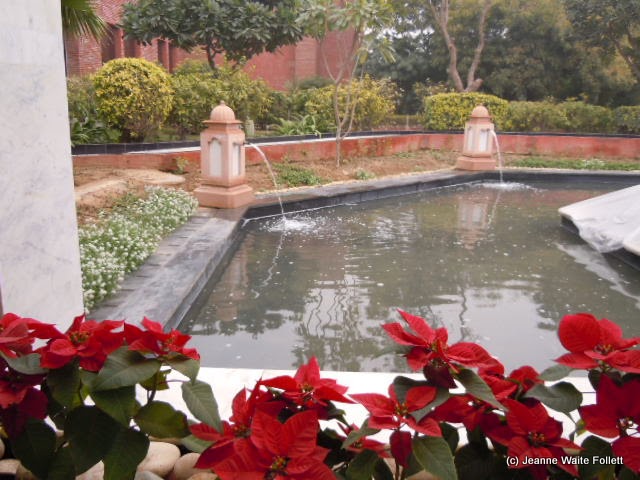 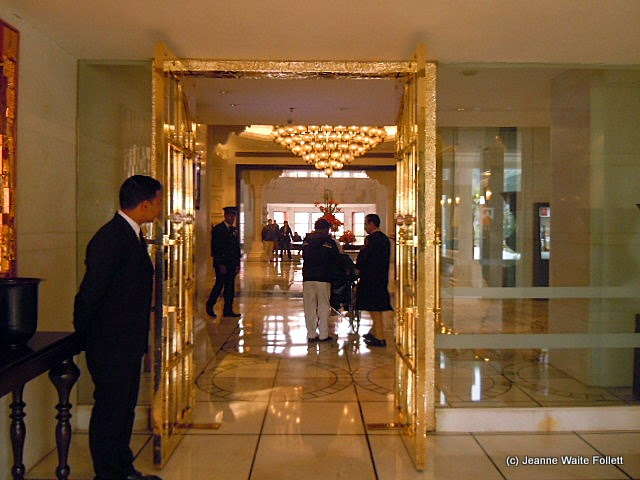 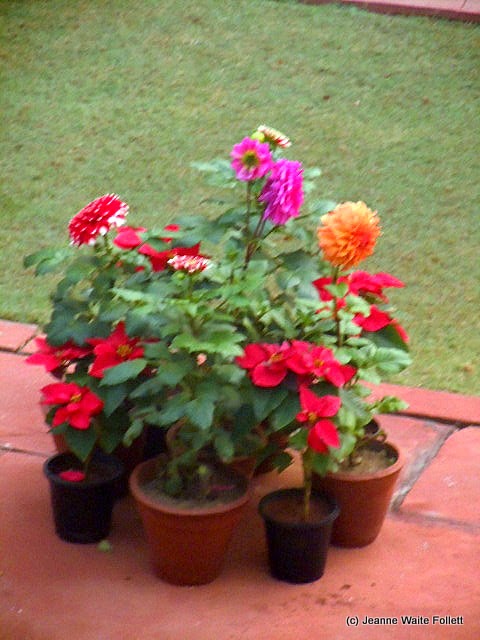 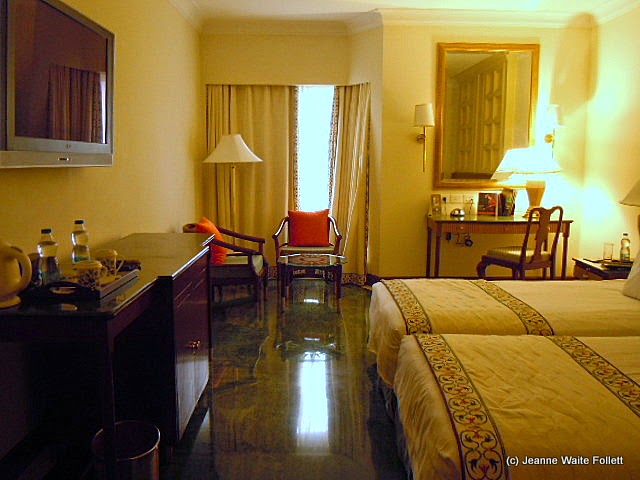 AND NOW FOR THE PART YOU'VE BEEN WAITING FOR: 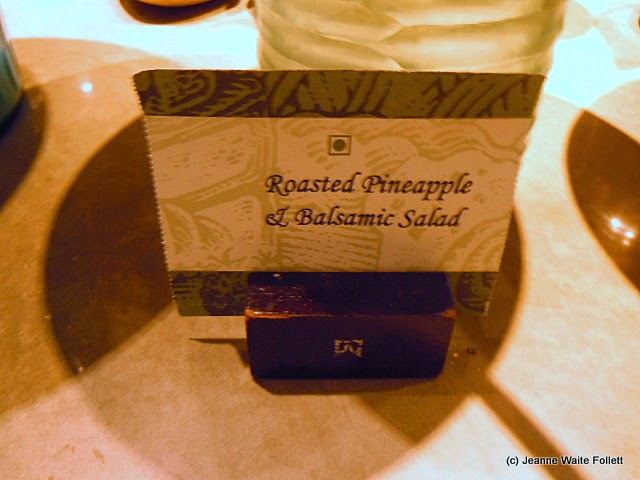 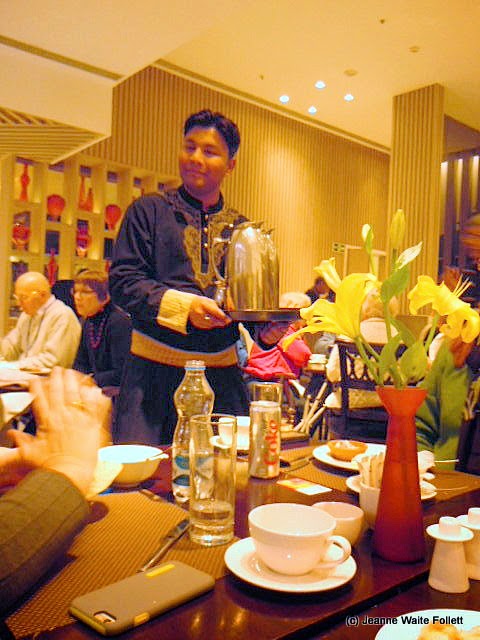 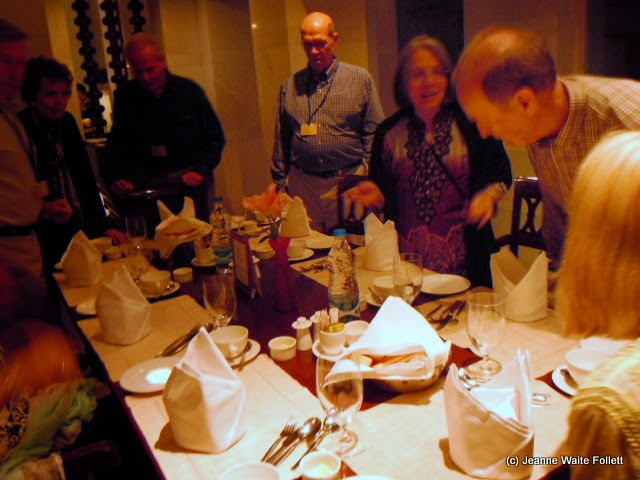 On our last night at this Agra hotel, we had our choice of items for a special dinner. 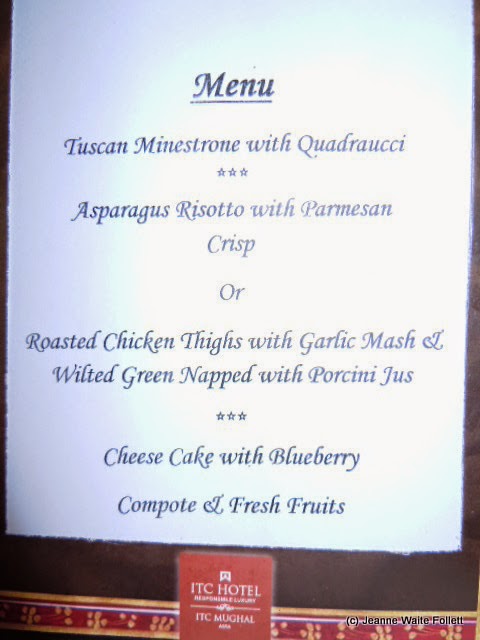 You think this was a long post?   I told you at the beginning it was going to be a long day.