The India Journals, Ch. 20, Delhi Belly and the Downstream Journey


Traveling can be pretty funny. You’ve got to deal with long flights, different cultures, and sometimes you even have to spend a little time on the toilet (believe me I know).—Anon.

I have discovered the ideal way to completely lose track of what day it is when you’re traveling.  I use a seven-day pill dispenser for my vitamins and meds.   I might not know the date, but at least I know the name of the day.

The trouble starts when the dispenser is empty and needs to be refilled.   From then on, I am lost.   Frankly, I don’t care.  My photo properties tell me the date, albeit the date in the U.S., and the time in Alaska Standard, not in India.  I hope somehow to keep track that way for the journals-to-be-written when I reach home.

On another matter, I confess to having a slight touch of Delhi-belly, perhaps the last of the tourists on board to host the malady, or so I’m told by fellow travelers who keep track of who is sick and who isn’t in an effort to determine what is causing the problem. 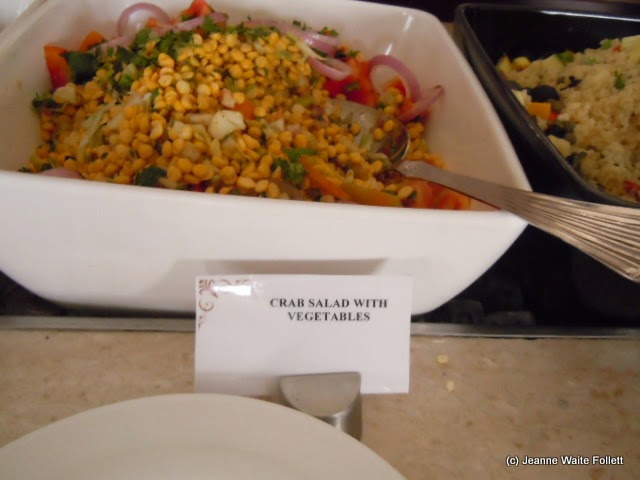 While annoying and slight, it is not incapacitating and does not keep me from the excursions, nor have I been afflicted with nausea and vomiting.   Some have been laid low for several days. 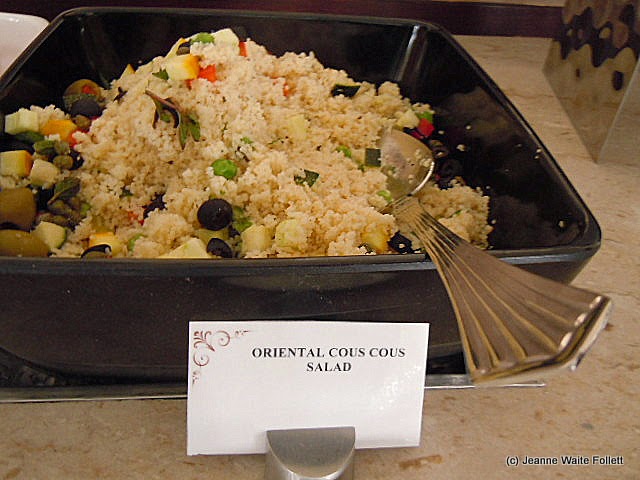 The “official” explanation, delivered with a straight face at the evening’s shore briefing for the next day, is that we are not used to the daily changing temperatures, along with different sensitivities to spices.  It’s hard to keep a straight face when temperature changes are mentioned, or the interaction with malarial drugs many of us are taking, but we do consider the spices thing for some.   We are told the spices have been halved in the recipes, then cut down again.

The crew is trying so hard to keep us safe and healthy that I hesitate to mention my very mild problem to anyone.   There are crewmen holding containers of hand sanitizer fluid everywhere and we make frequent use of the product.   I am carrying prescription medication, but it is an antibiotic for bacterial infections rather than an anti-diarrheal.


Nonetheless, after being relatively problem-free thus far, I was hit with a sharp and uncomfortable pain across my midriff shortly before dinner time last evening.  It would not go away.   I was in bed by 7 P.M. but there would be no sleep with this annoying pain.

I got a can of Sprite from the mini-bar fridge, took a few swallows, and within a couple minutes the pain was gone.  I also decided to take some of the prescription medication.   I get the package and read the directions which say to take two pills immediately, and then one daily for a few days.   I take the two.  (Note:  the problem cleared up the next day and I did not take any more pills, despite the directions.) 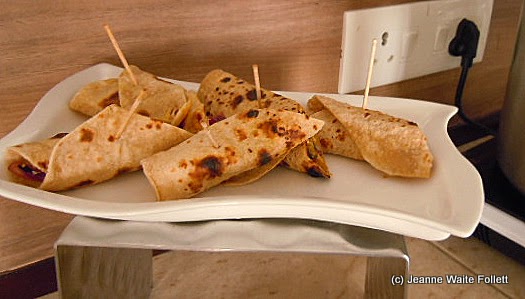 I have been eating fairly bland foods for a couple days and skipping dinner in the dining room, although that decision was based more on the length of time it takes to serve a four-course meal.  Instead, I get cheese, bread, and butter at breakfast or lunch, and have that for dinner in my room, along with a banana or tangerine. 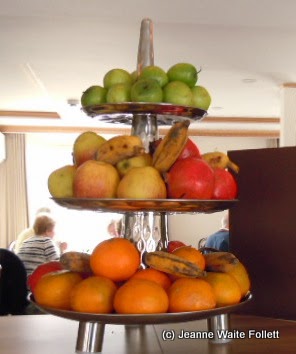 One of the cures recommended for Delhi-belly is yoghurt, which I plan to try this morning.   Alas, the yoghurt is colored green with an unknown flavor so I chose oatmeal instead.

We are now heading downstream, on the way back to Kolkata.   The movie “Gandhi” with Ben Kingsley will be shown in the lounge this morning and I go early to select a good seat.  I have seen the movie before, a long time ago, but I am sure it will mean so much more this time. 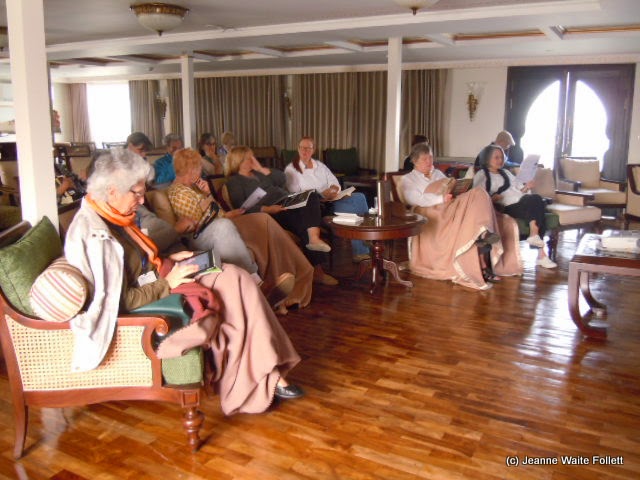 The crew has arranged the lounge chairs for the movie, and after trying a couple, I wind up on a sofa with a pillow on the arm for my head, and after everyone arrives and is seated, I stretch out.

Several crewmen are involved in setting up the equipment for the DVD.   There seems to be a problem.   Eventually, they get the DVD to play, but the sound is exceptionally quiet and cannot be raised. I turn to a man sitting near me and whisper, “They need to call tech support in India….”  He struggles to not laugh out loud.

Another man brings another piece of equipment and voila! we have sound.   The man behind me whispers, “Looks like they took your advice and called India tech support…”   Unfortunately, I laugh out loud once before I can stop myself, but no one seems to notice, or they pass it off as something else that crazy Alaskan did. 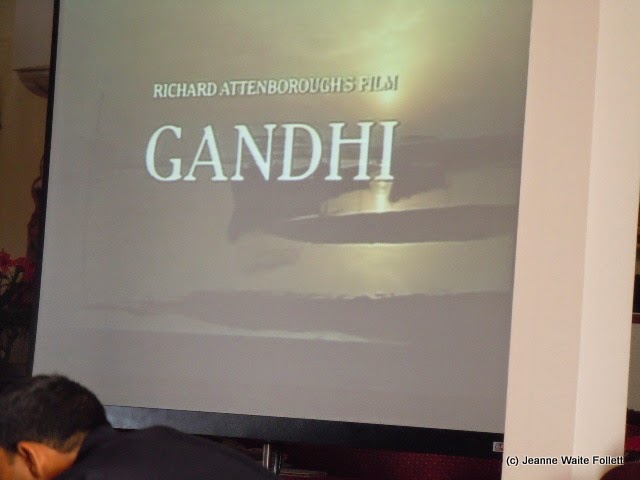 The movie begins and I think again that Ben Kingsley was born to play the role of Gandhi and his non-violent, ultimately-successful fight to gain India’s independence from Great Britain.  Now that I have had a wee taste of India, the movie means so much more, especially the results of the excision of Pakistan and the subsequent riots between Muslims and Hindus.

And we motor on down the river as we watch Gandi’s amazing story. 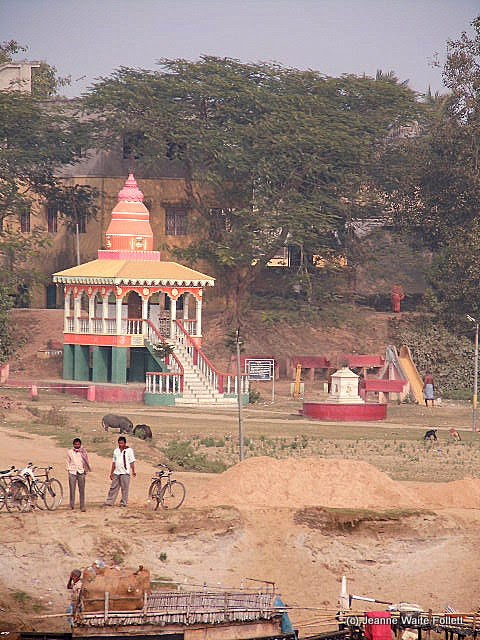 NOTE:  After I returned home, I learned one person is still being treated for a gastrointestinal parasitic infection.   Many had Delhi Belly and recovered after taking appropriate medicines.   One man had an eye infection.   Some think the water served at meals was not bottled water.
Posted by Gullible at 7:00 PM