The India Journals, Ch. 15, Tomb of the Last King of Bengal and the Dog That Lives There

Ch. 15, Tomb of the Last King of Bengal and the Dog that Lives There


India conquered and dominated China culturally for 20 centuries without ever having to send a single soldier across her border!~~~ Hu Shih ( former Ambassador of China to USA) 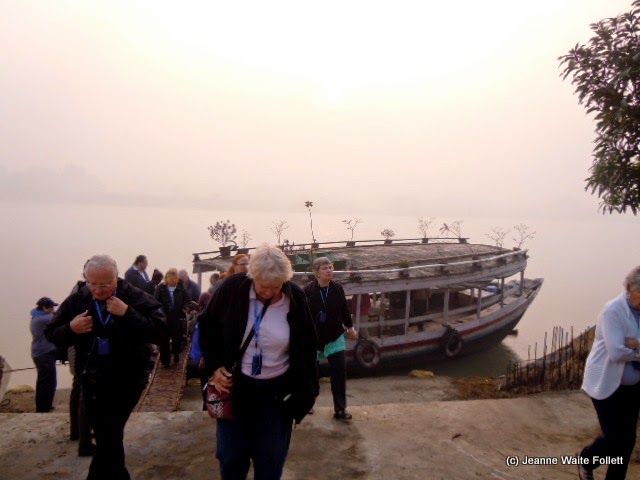 We are on way to visit the village of Khushbagh and the burial tomb of the last independent Mughal Nawab of Bengal.

The villagers are up and going about their morning chores, dressed warmly against the chill.   Once we pass the fields, I see jaggery being made from date palm.   Jaggery, a sweetener that looks a lot like brown sugar when boiled down to its essence, usually is made from sugar cane juice, but date palm is substituted where there is no sugar cane. Two shops are open at the junction of our path with a dirt road running through the village.  Men are sipping hot drinks from tiny plastic cup and eating boiled eggs and pastries.   There is no doubt in my mind that they have come to see us. 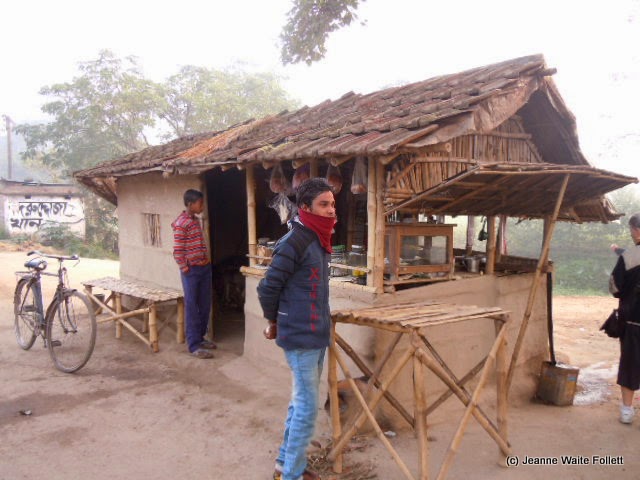 We reach the Ali Vardi Khan mosque complex and pass through its gate.  India’s history over the millennia is far too complex for this casual traveler to comprehend, but as China had its Silk Road that opened that kingdom to the Western world, India had its renowned spices that opened it to traders and invaders, conquerors and kings. 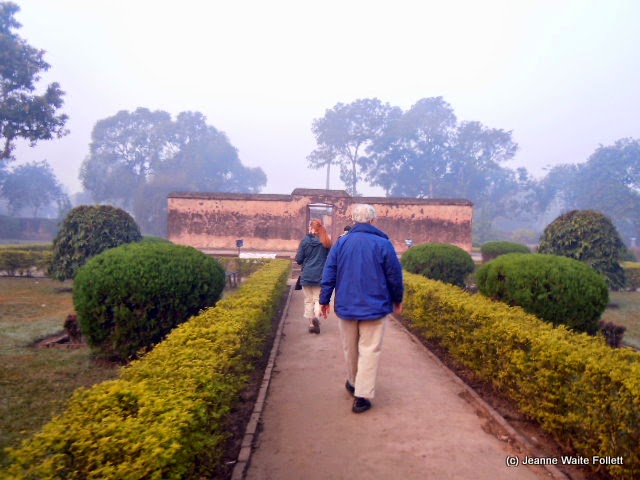 Ali Vardi Khan was one of those conquerors, and as events played out, he was the last independent Mughal king of Bengal. He was the Nawab (ruler) of the vast Bengal territory from 1740 to 1756.  He was buried in this quiet complex after his death from dropsy in 1756.  A few years later, the nawabs ruled on behalf of and at the pleasure of the British Empire. 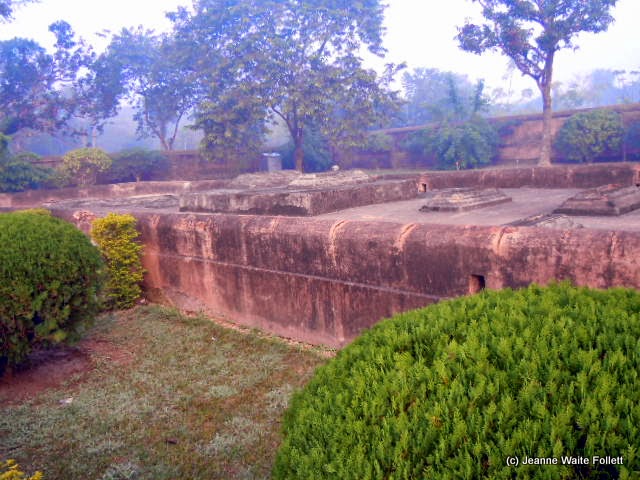 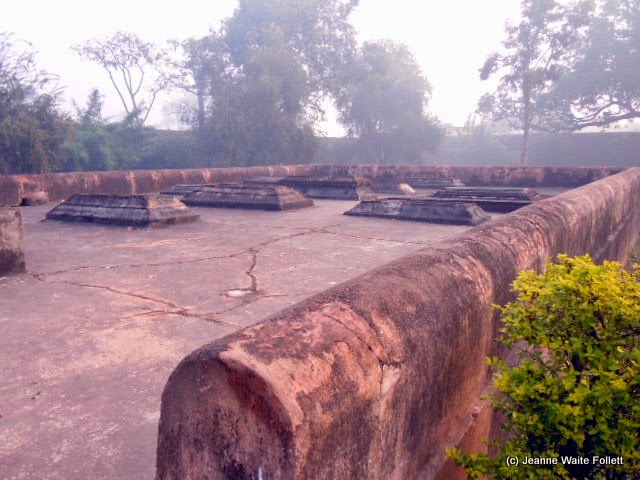 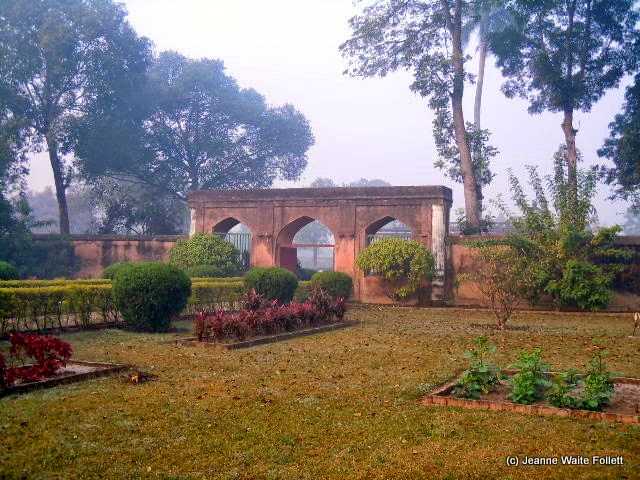 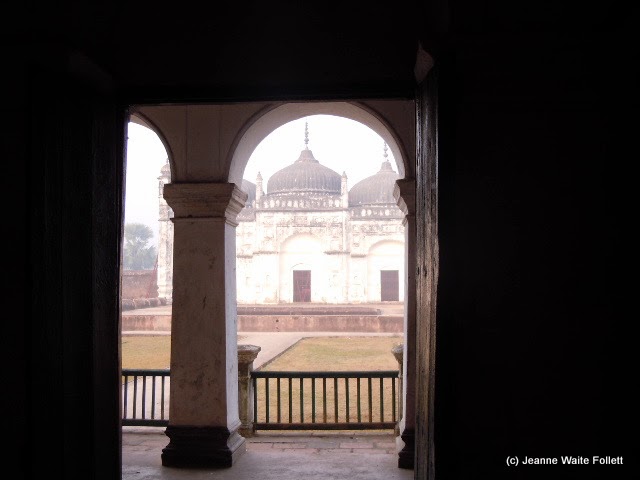 We wander around the complex, seeing the tombs of relatives and body guards, and I wonder if they all died at the same time, or were buried here after their natural deaths.  I don’t have an answer.

A whitish dog with tan spots on one side and tan ovals on its other, approaches one of our group and she pets it for a long time.  It relishes the contact.  The dog lives in this complex, we’re told.  It follows our group as we walk back to the river, passes with impunity a barking dog defending its territory, and chases off an interloping dog that appears to have acceded to its lowly lot in life. 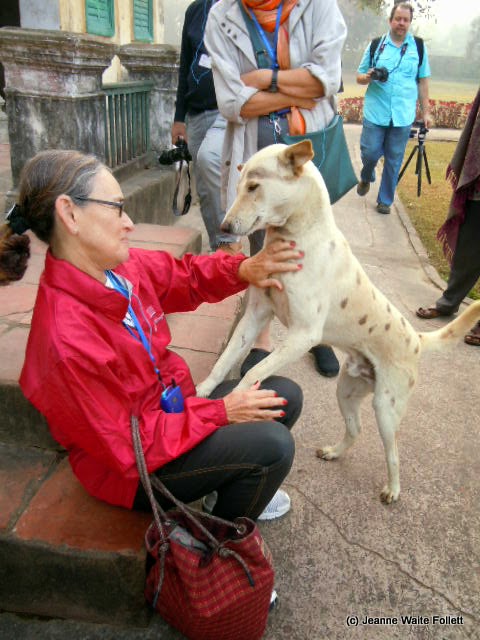 Sumit, the expert on the Ganges area who gives our nightly port briefings and answers questions galore, is delighted with this landing spot.   A month before when they were finalizing this itinerary, he explains, this was nothing but a dirt bank.   Now it boasts stairs-in-progress, a mark of how pleased the villagers are to host our visits, he says. 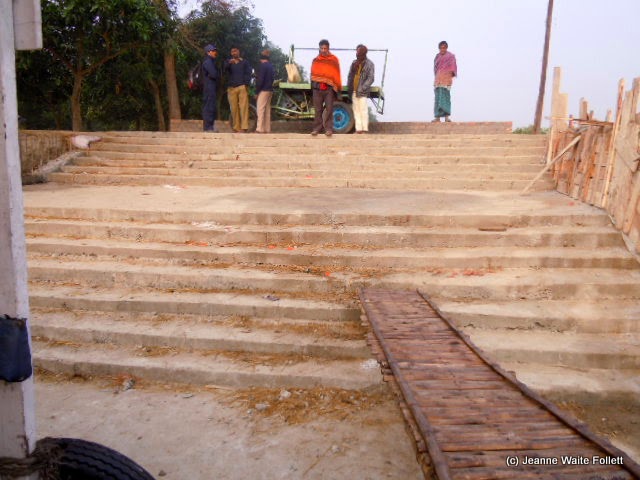 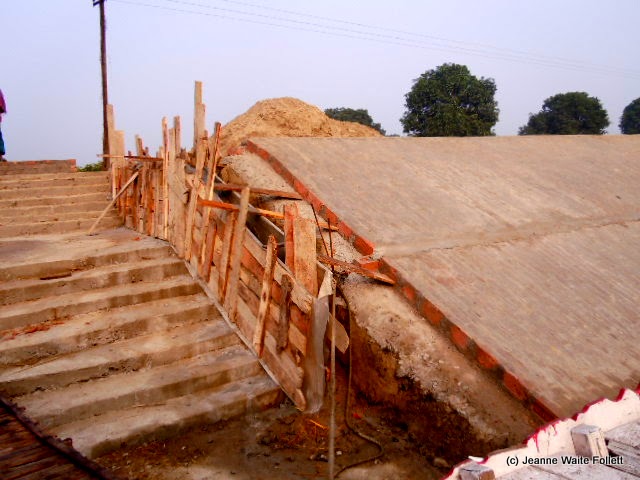 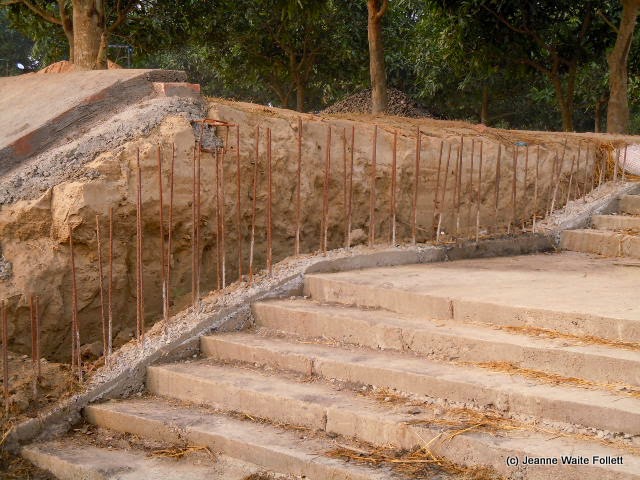 I am one of the first to board the country boat and move to the back where something catches my eye.  The tiller is made of two pieces of plumbing pipe, and I am more in thrall with this humble boat than ever.


The dog waits as the tourists board and watches are the country boat pulls away.   It's difficult to watch so I anthropomorphize and give the dog honorary guide dog duties, hoping the tourists to come will stop long enough to pet him. 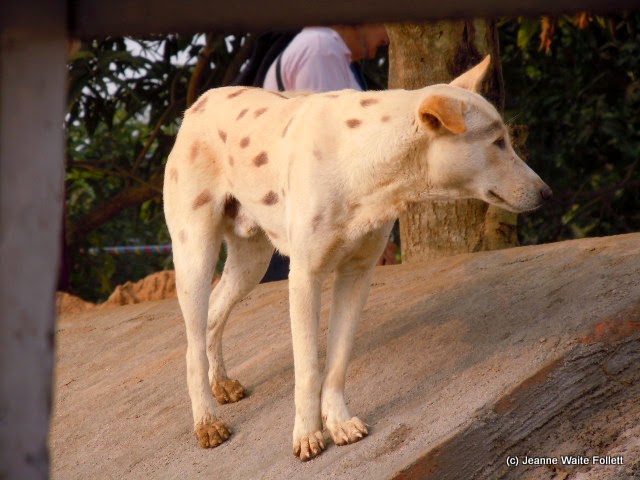 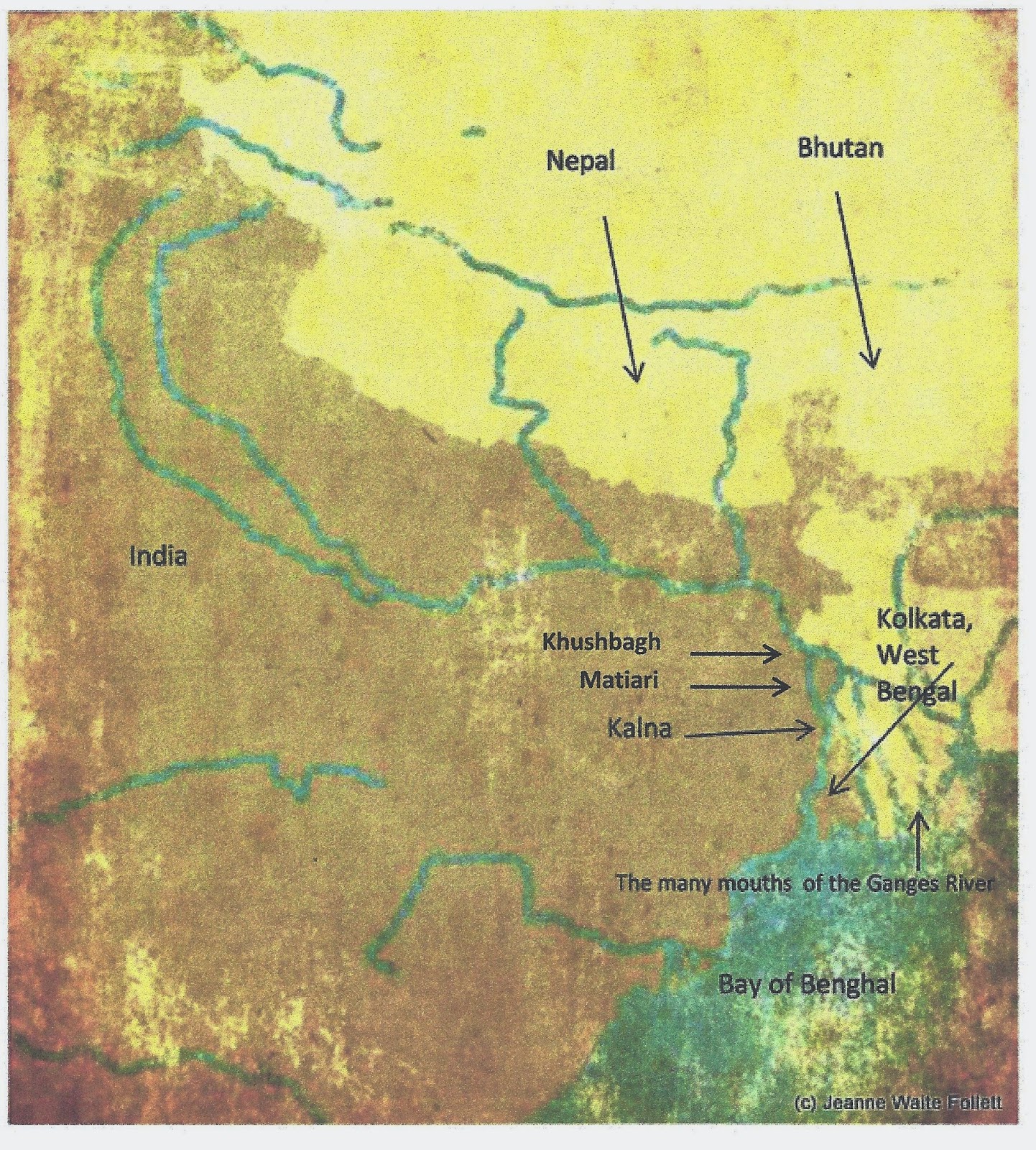 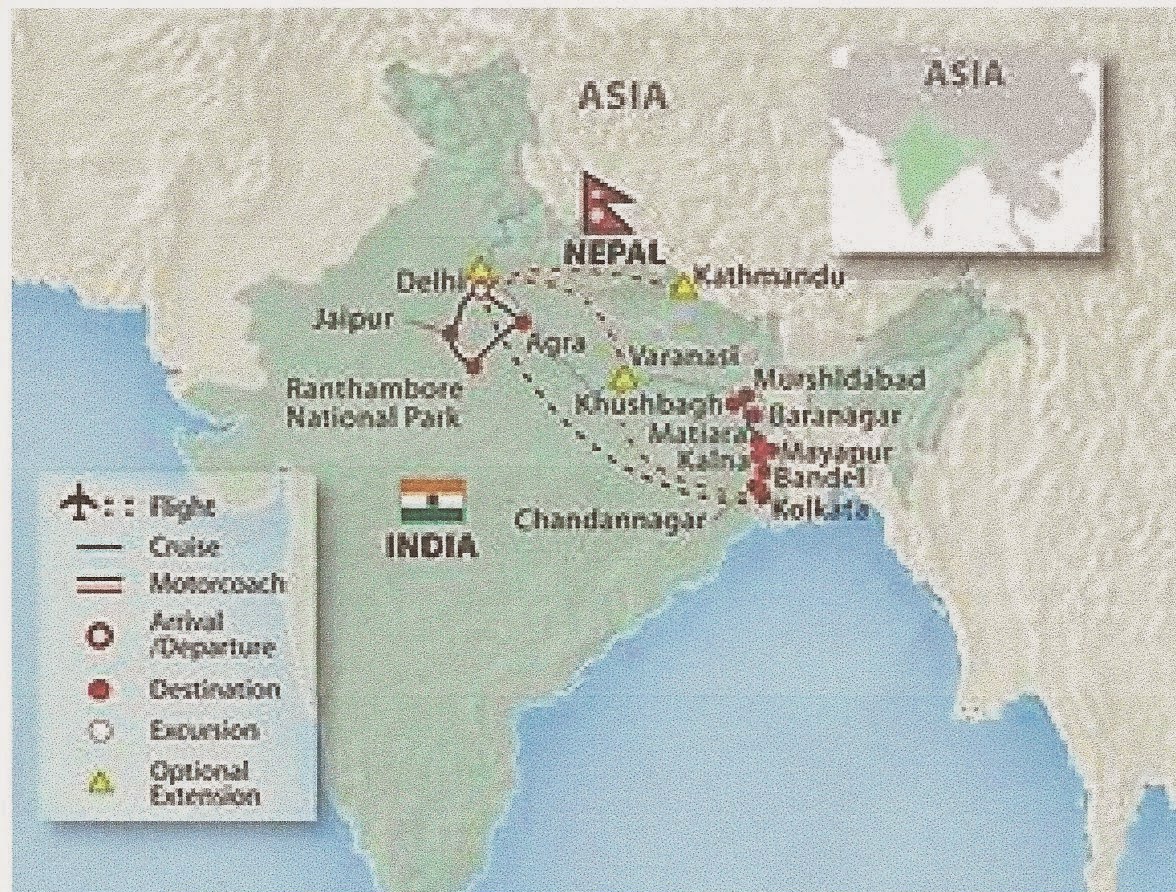