The India Journals, Ch. 13, Bathing in the Waters of the Sacred Ganga

Ch. 13, Bathing in the Waters of the Sacred Ganga

Perhaps travel cannot prevent bigotry, but by demonstrating that all peoples cry, laugh, eat, worry, and die, it can introduce the idea that if we try and understand each other, we may even become friends.—- Maya Angelou

I bathe in the waters of the sacred Ganges River. My food is prepared with those waters, my dishes cleaned in it, my linens washed in it.

Each morning Ganga water runs through my hair, onto my shoulders, and down the rest of my body.   It is cleansing and refreshing. 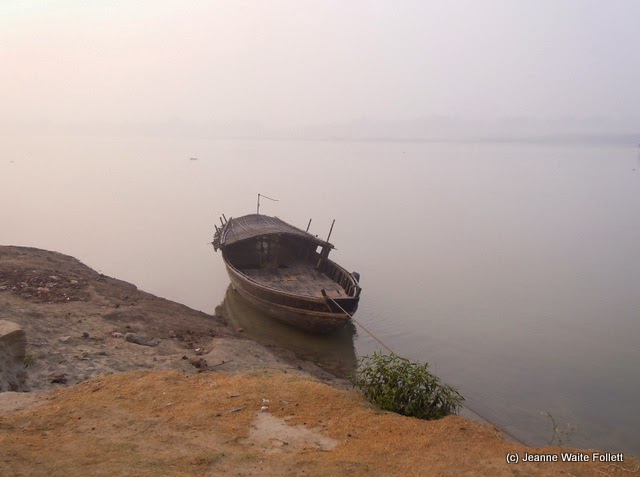 I don’t drink it, though, not on my life.  Unlike the third of India’s population that lives along the river and its tributaries, my Western body is not immune to the pollutants the Ganges gathers and carries along on its voyage to the sea.  Why then, you might ask, why would I bathe in it and eat food prepared with it?

Because there is a water treatment plant on this riverboat, that’s why.  The shipboard water comes from the Ganges and passes through that treatment plant before it reaches me.  Most likely the water from the plant is perfectly fine, but there are—at the moment of this writing―six bottles of spring water in my room, generously supplied by Viking, or by Haimark, the owner/operators of the RV Ganges Voyager, so why take the chance that my foreign and fickle constitution might find something in the water to which to object? 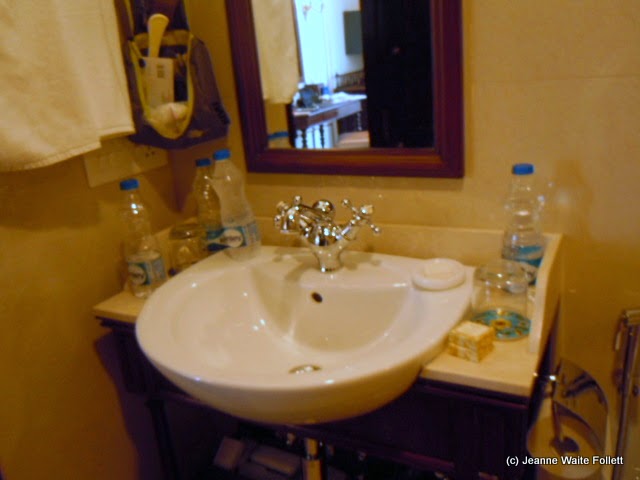 By the way, that bottled water is sold under the label Kinley, a Coca-Cola company.

If I use a bottle of water, it is replaced immediately.  More bottles are available in the dining room, the lounge, on the country boat, and in the buses and coaches that transport us on land.   So while I bathe in the sacred waters, I don’t drink them. 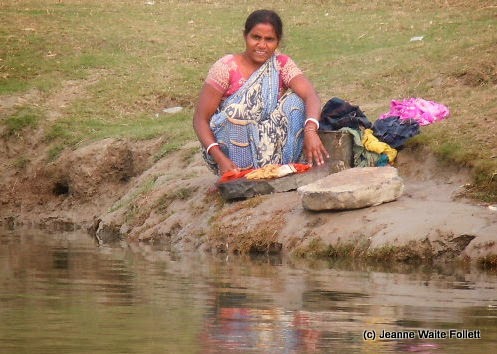 The Ganges, known as Mother Ganga to Indians, is birthed high in the northern Himalayan mountain glaciers and snow fields and flows south into India and east to the Bay of Bengal, a journey of 1500 miles.  It has many arms and tributaries, joining the Hooghli River near Kolkata, the portion of the river that we are now on.

For the locals, the Ganges is life-giving and life-sustaining.  Each day of this voyage, I see hundreds of people bathing in the river.   Men and women bathe separately in most cases, and their bathing places usually are separate.  Men bathe in shorts or loincloths; women are fully clad, though barefoot. 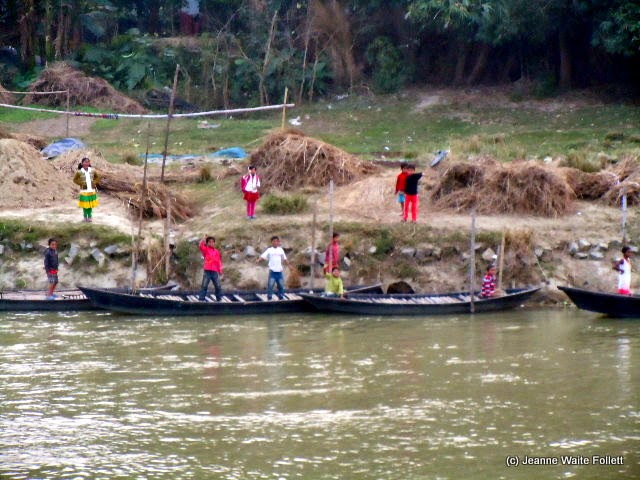 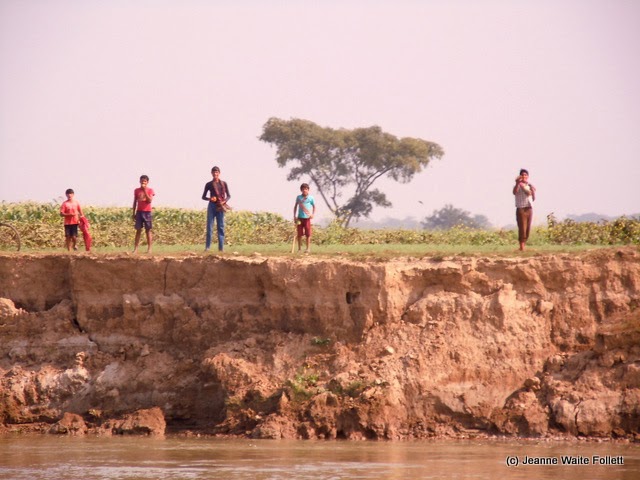 I see men herd cattle to the river to drink.   I see women beating clothing on rocks and swishing the clothing in the water to rinse them.  I see drying clothing hanging from bushes, fences, balconies, wherever. 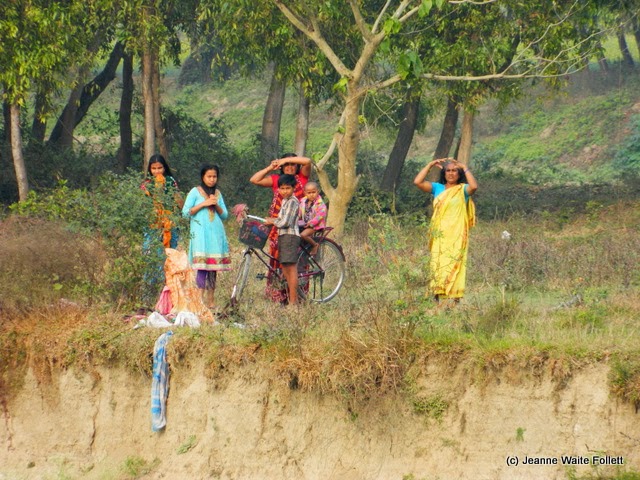 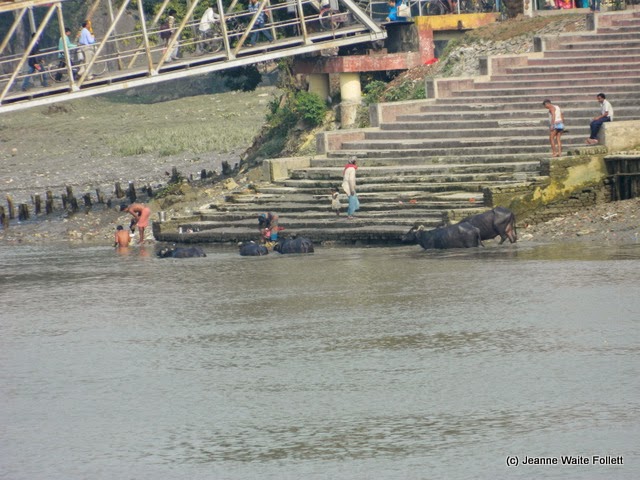 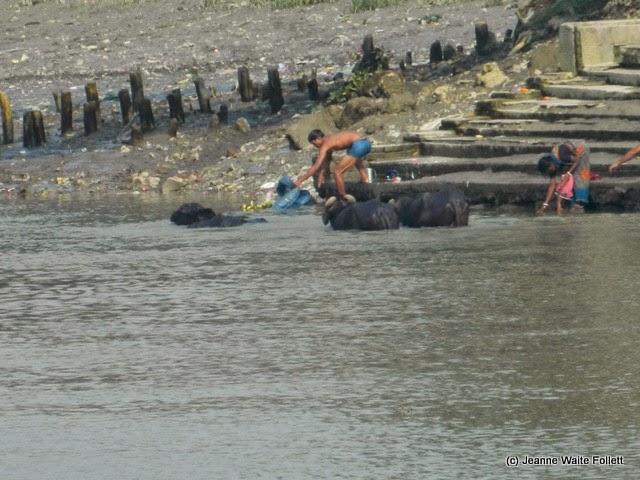 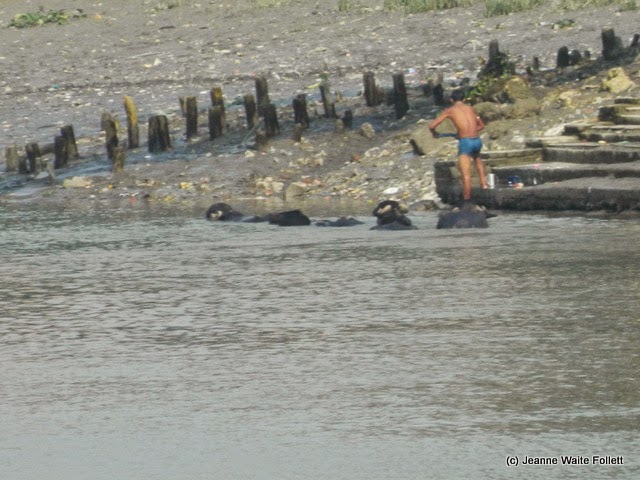 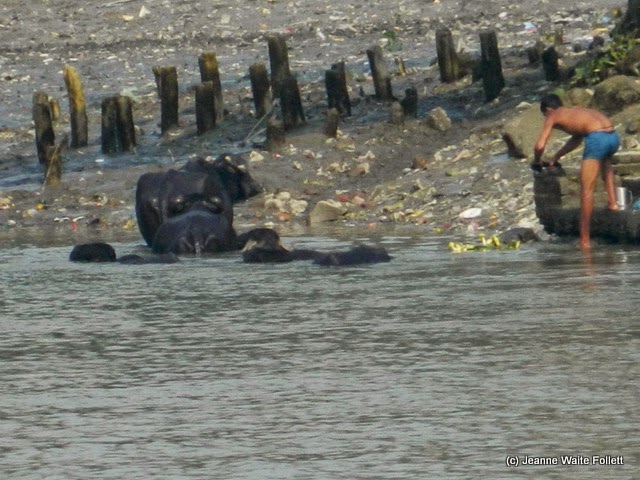 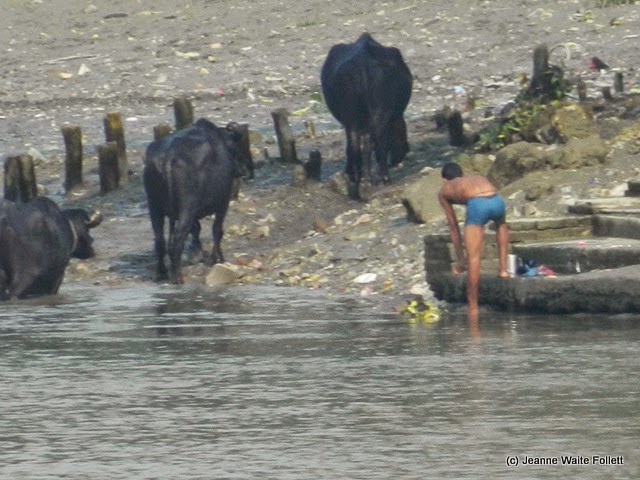 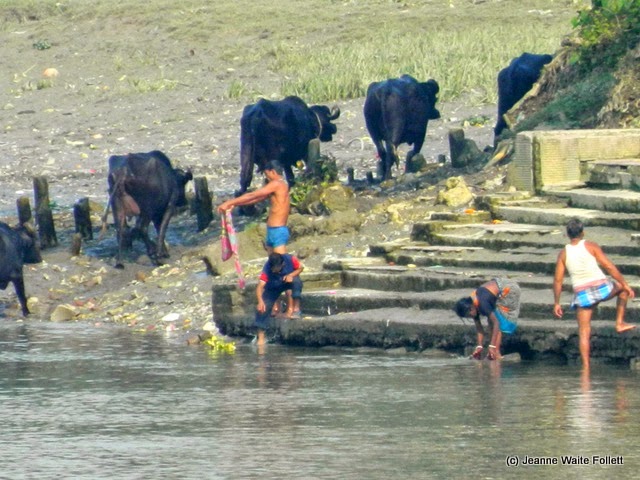 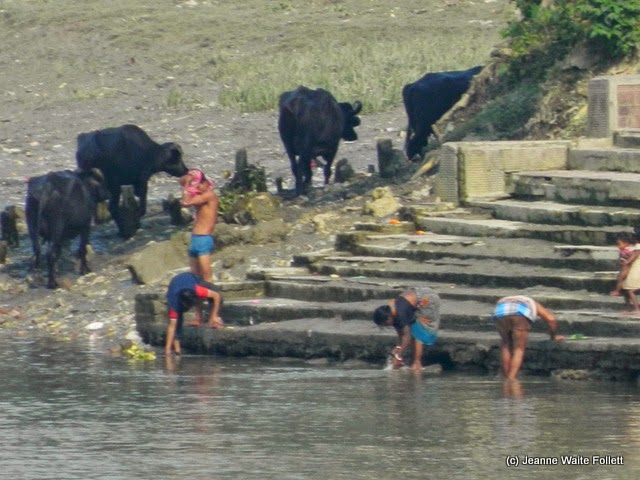 Raw sewage, corpses both human and animal, all matter of disease-causing bacteria impact the water, and it is considered one of the most-polluted rivers on earth.   Yet religion decrees the Ganga is holy and purifying to the soul, while every day dozens of children die of diarrhea. 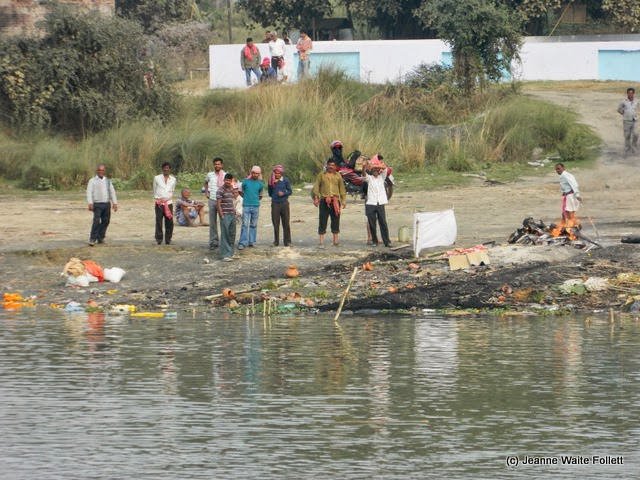 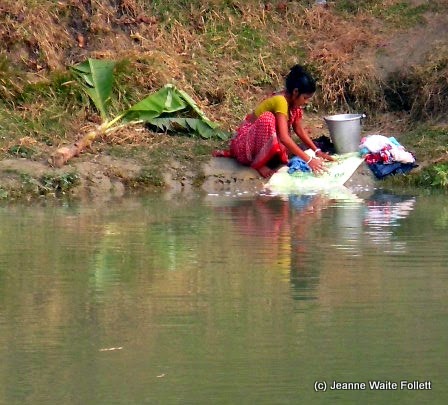 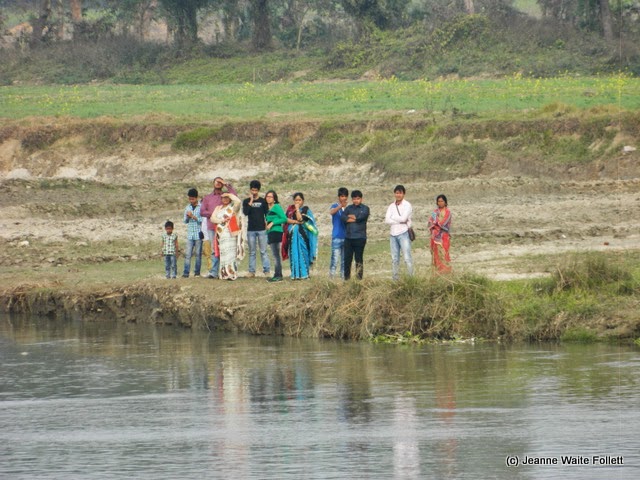 But the Ganges is important for another, critical reason:  it is the arterial system of northern India.  Goods are hauled to market on small, double-ended boats called naukas.  The little black boats range in size from about 12 to 30 feet and are flat-bottomed or have V hulls.  Some are passenger ferries with places for sitting; some have bamboo platforms and carry larger freight. 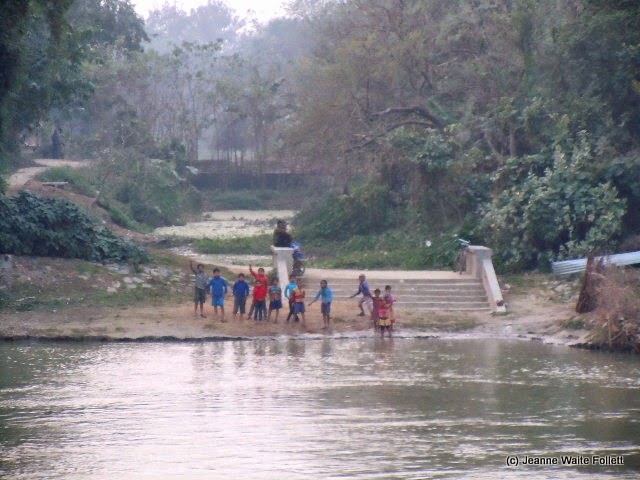 On the river at Mayapur, a large bamboo raft was tied up to shore, no doubt used to transport goods for the bazaar outside the Hare Krishna temple.

Attempts have been made to clean up the Ganges.   One failed for reasons of corruption.  Under the new and ambitious prime minister currently in office, another project is taking shape under a two-year planning phase which hopefully will lead to a 20-year implementation phase. 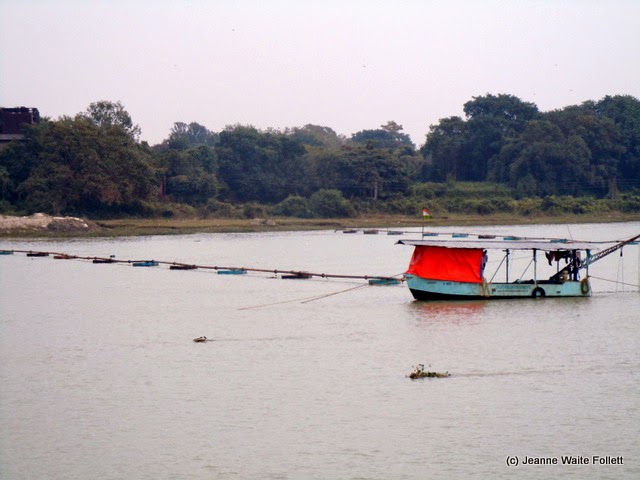 In the meantime, the ubiquitous foam plates float by, often captured by the hyacinth plants floating in the river.  Downstream around Kolkata, there are large rafts of floating hyacinth, with debris intermixed.

The hyacinth, said a woman on board who has traveled in India extensively, is invasive everywhere.   It has so taken over the Congo River in Africa that massive amounts of funds are expended in trying to keep that waterway open for navigation.   The Congo has the missionary nuns to thank for that infestation of a non-indigenous plant.   A little reminder of home in Florida now costs millions to keep the waterways clear.

However, she said, hyacinth purifies the water.   Nowhere near enough hyacinth for the Ganges, though.