The Fur and Feather Journals, Ch. 4, In Which I Confess How Out of Place I Am

In order to appreciate some of the things that happen on this trip, it's necessary to introduce and understand the people I am with.  They are all dedicated photographers.   For Ron, it’s his career, how he makes a living.

Until this trip, I had talked with Ron only two times.  The first time was at Tern Lake when he shot a photo of me kayaking in the lake and asked for a model release.   The second was when he hosted a photo tour of Antarctica at a venue in Seward, and I attended.   Unfortunately, I had trouble finding the room where he was speaking and showing his photographs, and arrived for only the last part.

I had a story to tell him:   I had boarded a flight somewhere in the world and overheard a couple talking about how seasick a number of passengers were on a Cheeseman tour of Antarctica.   I knew Ron was the photographer on that voyage and thought he'd enjoy the story.   He did, even mentioning it to me at Silver Salmon Creek.

Because of this trip, this is what I know about Ron:  He is like the Energizer Bunny after two shots of 5 Hour Energy, chased by a six-pack of Red Bull.   He never slows down.   He's always smiling--   witness the permanent smile lines radiating across his temples.

He's easy to be around, despite all that energy.  That constant smile pulls you in and you're comfortable, as if you're a long-time friend.   And, his enthusiasm is catchy.

He has a gift for photographic images that take your breath away.   He leads photography tours in Alaska, and Outside, and he always seems to be in the right place at the right time.

Others in our group, like Andy and Ken, also sell their photographic work.  Lynda’s business cards (Lynda Sanders Photography) are works of art in themselves.

Gary is a surgeon, but also a photographer.   Kate is a retired city official from Flagstaff, and she has the equipment and knowledge of a pro.

Rick, our bear guide, also is a professional photographer and leads photographic tours in Africa during the winter.   According to Ron, Rick has amazing stories to tell.

To these folks, cameras are a way of life.  In essence, they are pros; they produce works of art.

They swoon over the esoteric subtleties of f stops, use memory cards large enough to double as dessert plates and that can hold maybe a dozen photos.   Their equipment is top notch, professional, and, occasionally, lethal-looking.   Except for the white lenses.   White lenses are neutral.

RAW is a file format that-- and believe that I'm relying on Google to write this description--basically gives the photographer more to work with.  RAW captures everything the camera sensor sees, whereas in JPEG, the format most of us amateurs use, the sensor information is compressed and fine details are thus lost.

This is where those expensive, over-sized memory cards come into play, and because the files are so large, the card is quite limited in how many photos it can hold, whereas my 2GB cards will hold hundreds of snapshots.


There's much more to RAW than I can explain here  (or anywhere).   It's just infinitely better.   For me, I know it's out there and that's where it probably will stay.

We're at the dining table when Ron asks about how I use my DSLR camera.   I had told him previously that I really didn't know much about it.  "I just do everything on automatic," I answer.   He talks with the others at the table, suggesting a programmed mode would be best for me.

"Do you mean set the camera on P?" I ask, broadcasting my ignorance to all within earshot.  There is an extended, polite silence, much like the one that occurred EARLIER when I said, "I take snapshots."

He asks to see my camera.   "Maybe sports?" I suggest, somewhat redeeming myself because he agrees that sports is a good setting for wildlife.

Something is tickling my brain, begging for recognition.   Instinct tells me it's an epiphany of sorts, but my RAM, my internal Random Access Memory, becomes more random with age and I can't complete the thought.   It will continue to nag me throughout the trip.

Right now, though, we're off and running to find our first bear.   Well, not running.   Never run from a bear. 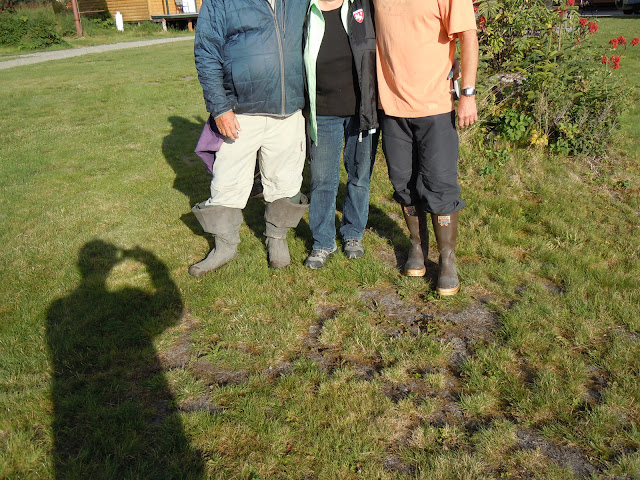