The Fur and Feathers Journals, Ch. 7, In Which It's Hard Out There for a Bear, Part One

NOTE:   I have temporarily modified the template for this blog to enable full screen photos.   It makes the text harder to read because you might have to scroll back and forth.   Hey, it's worth it though, right?   Hopefully the larger photos will put you right there with the bears.   Remember, stay together and don't make any sudden movements!   It will take longer for the photos to load, so go do some chores and then come back.


We’re inland a short distance, just upstream from the river crossing.  A dark sow is across the river, looking for salmon. 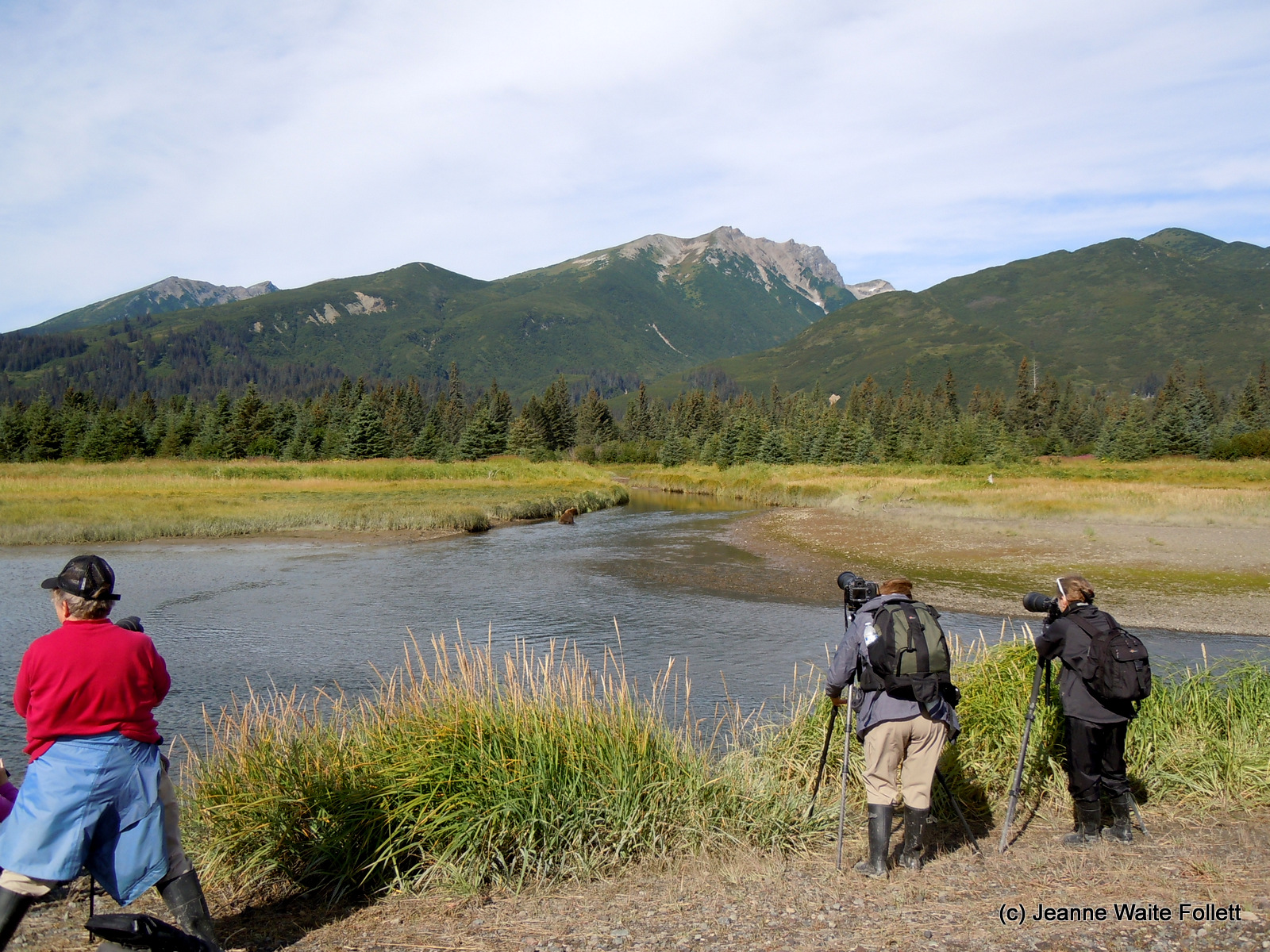 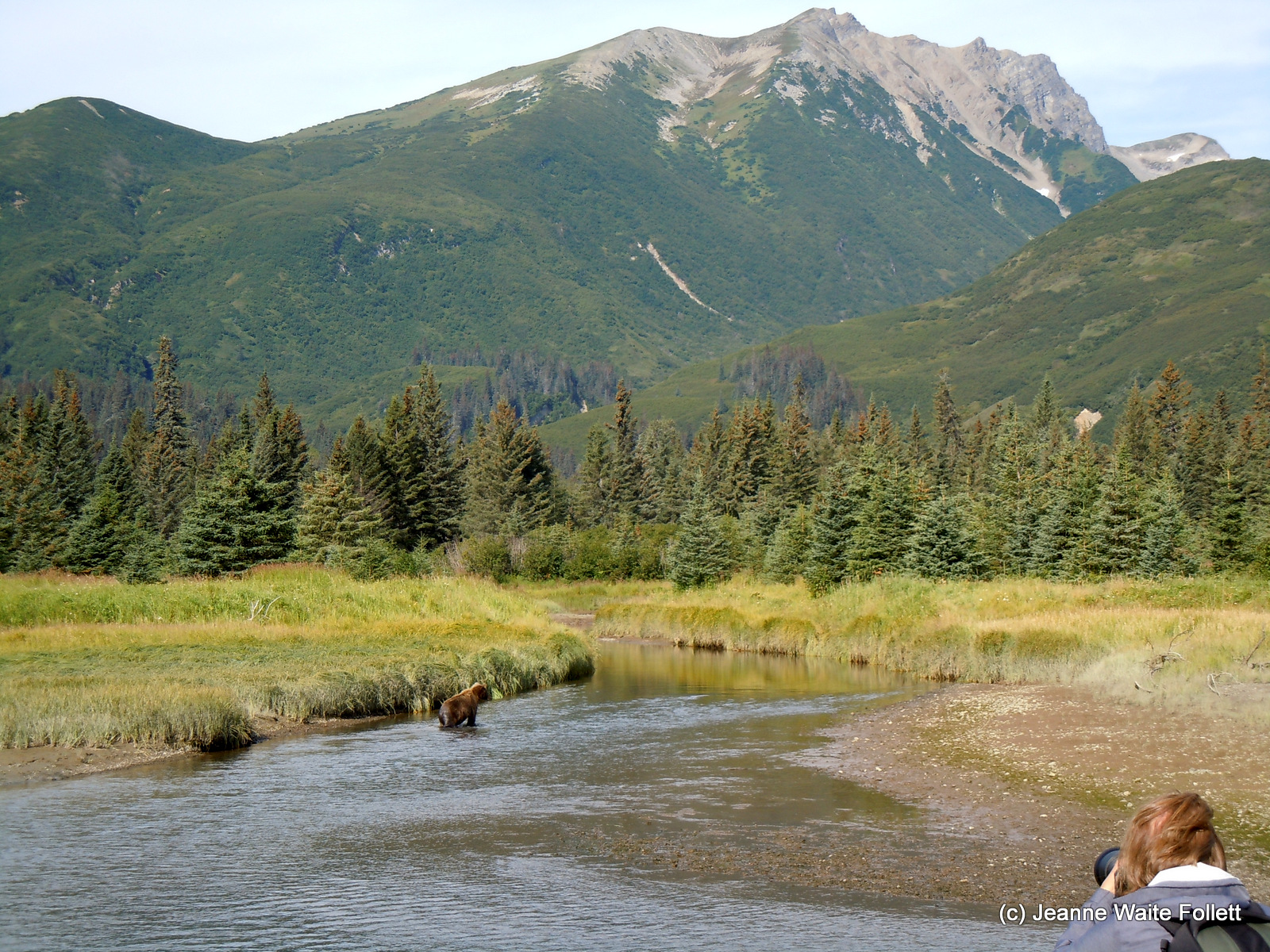 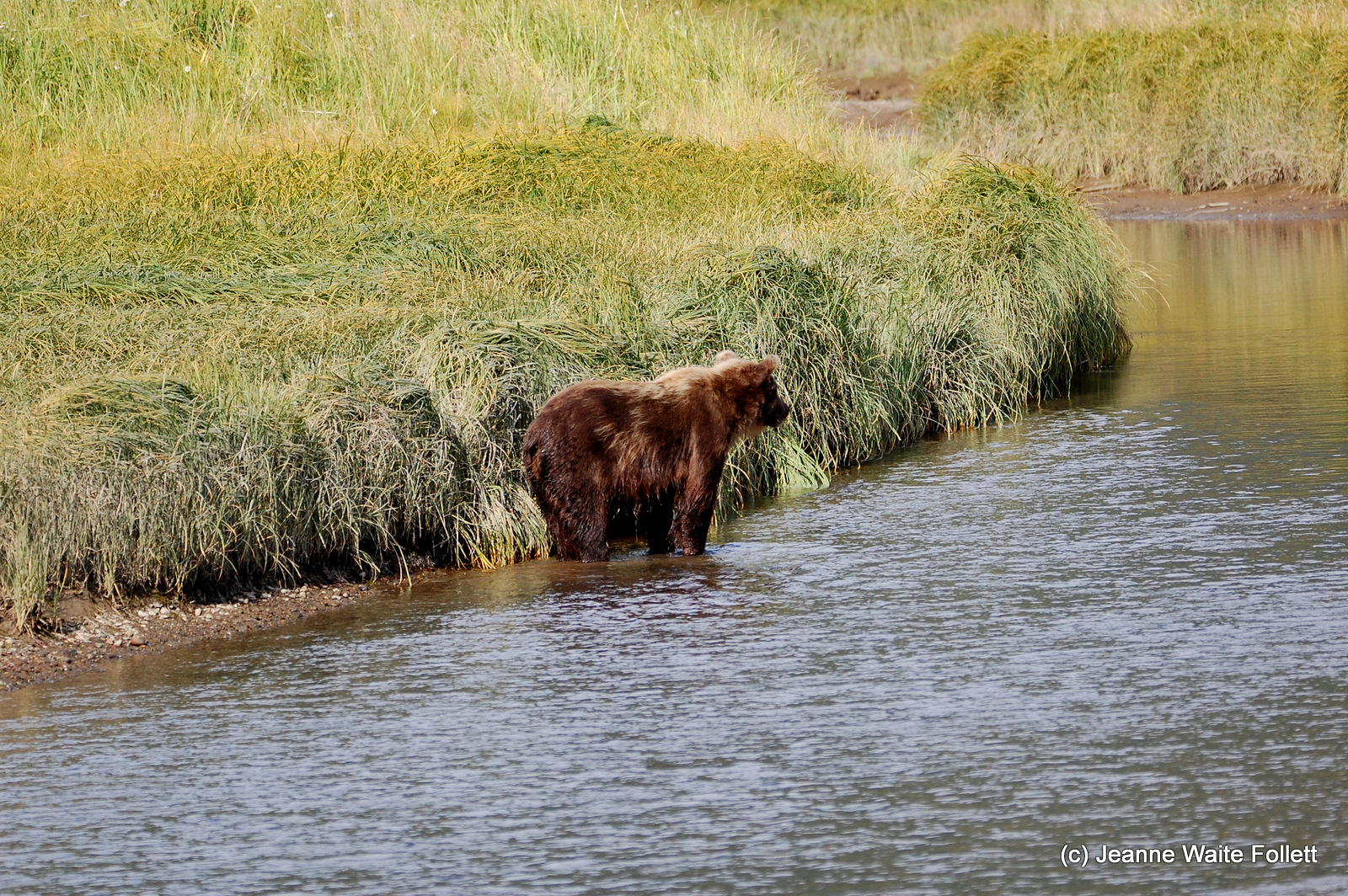 She listens for the slightest sound that indicates the location of a fish.   Perhaps it jumps or  disturbs the water with a swishing tail fin, and she’s on it with lightning-quick reflexes, though I can’t imagine any fish remaining in that vicinity when a full-grown bear splashes through the water after it. 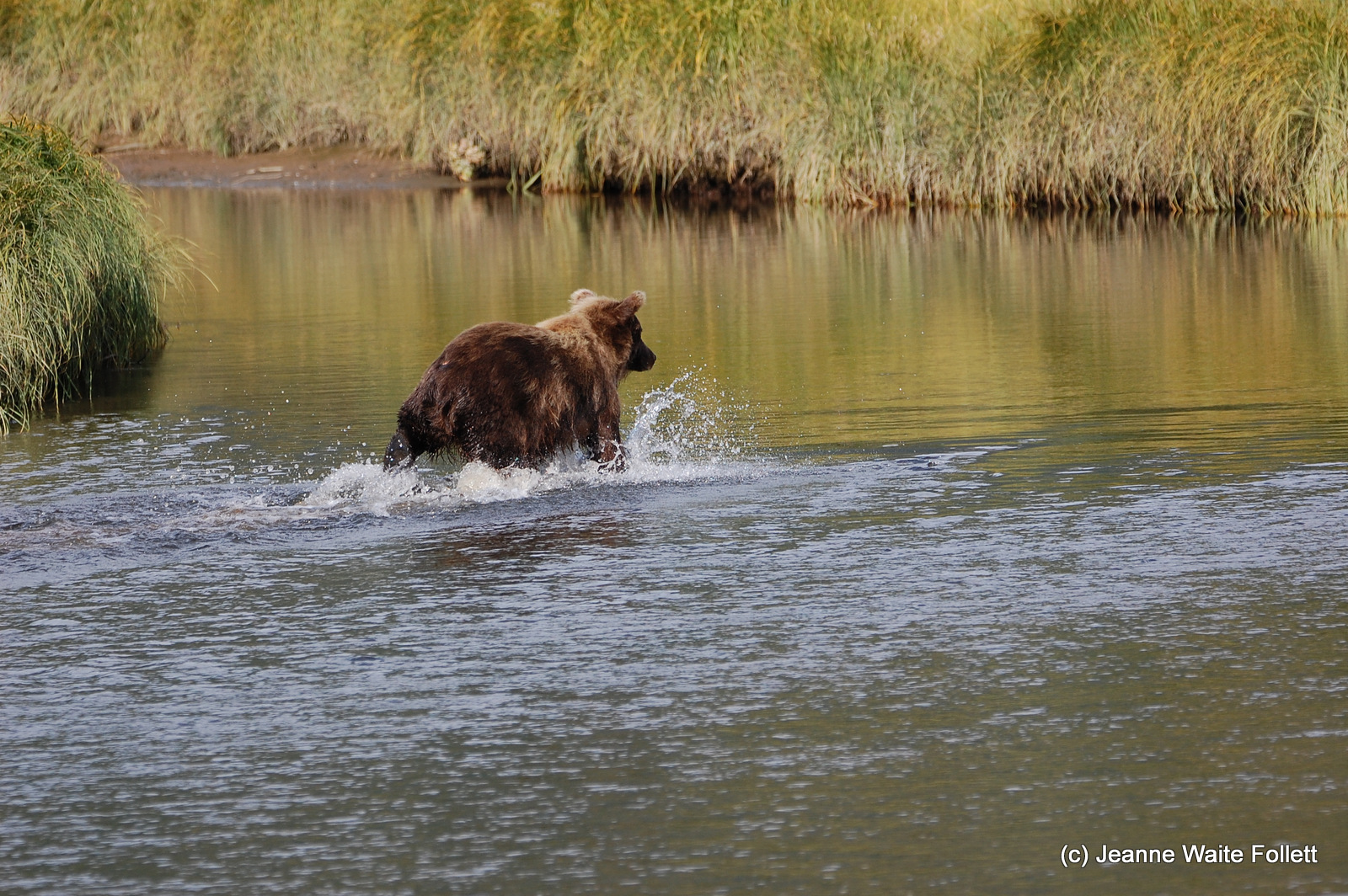 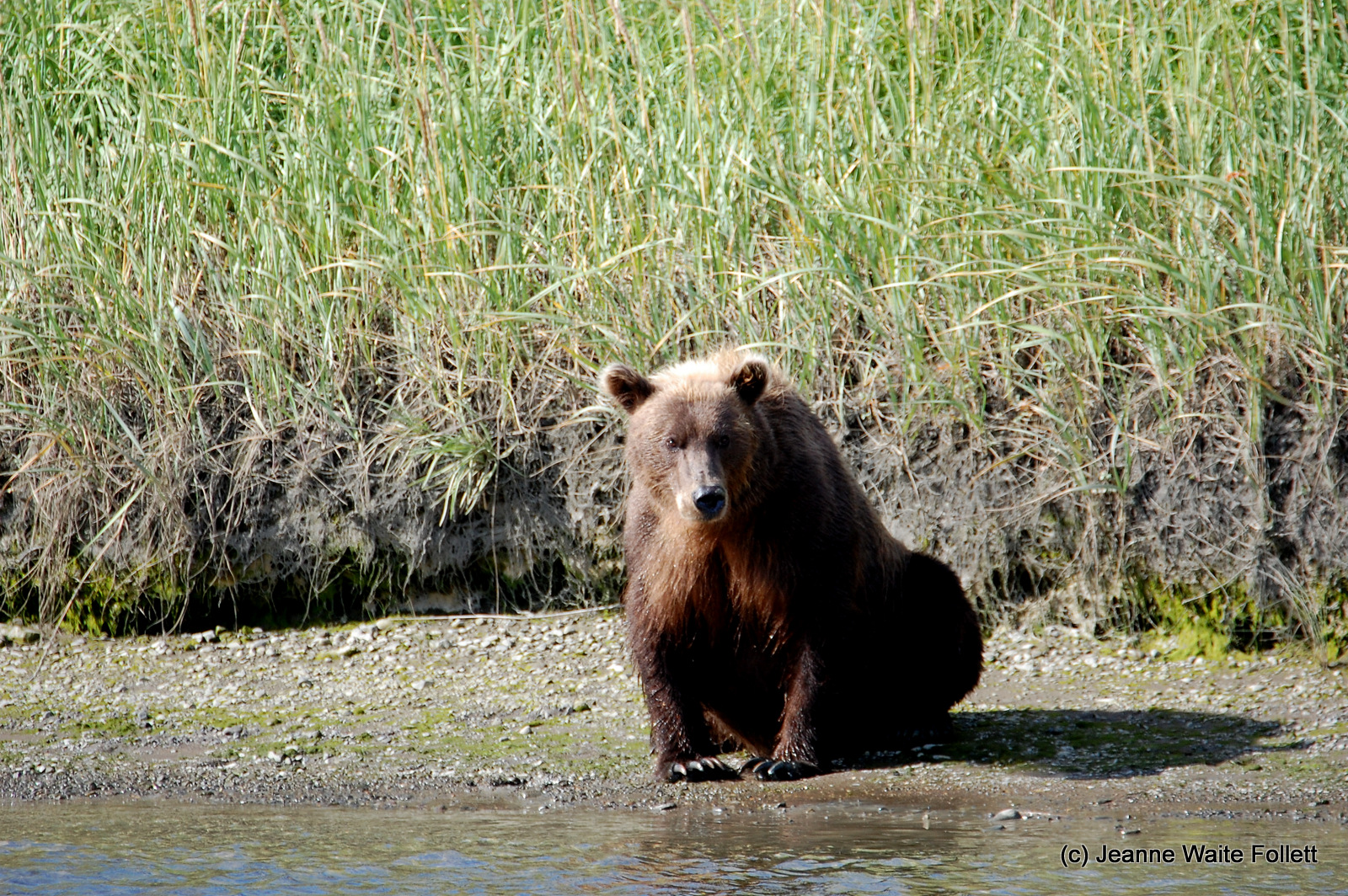 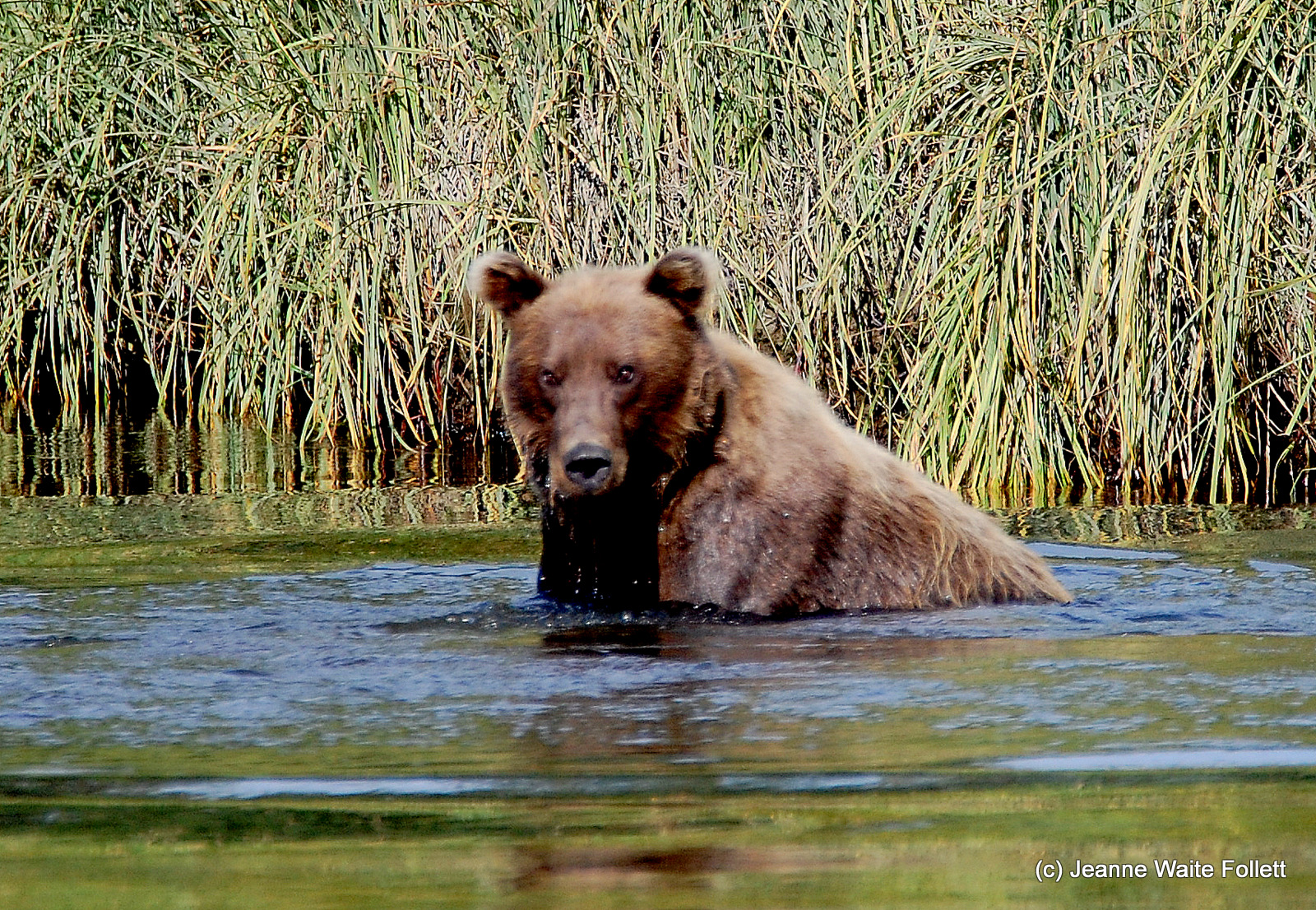 Occasionally she climbs out of the water and wanders through the sedge grasses, then returns to the creek. 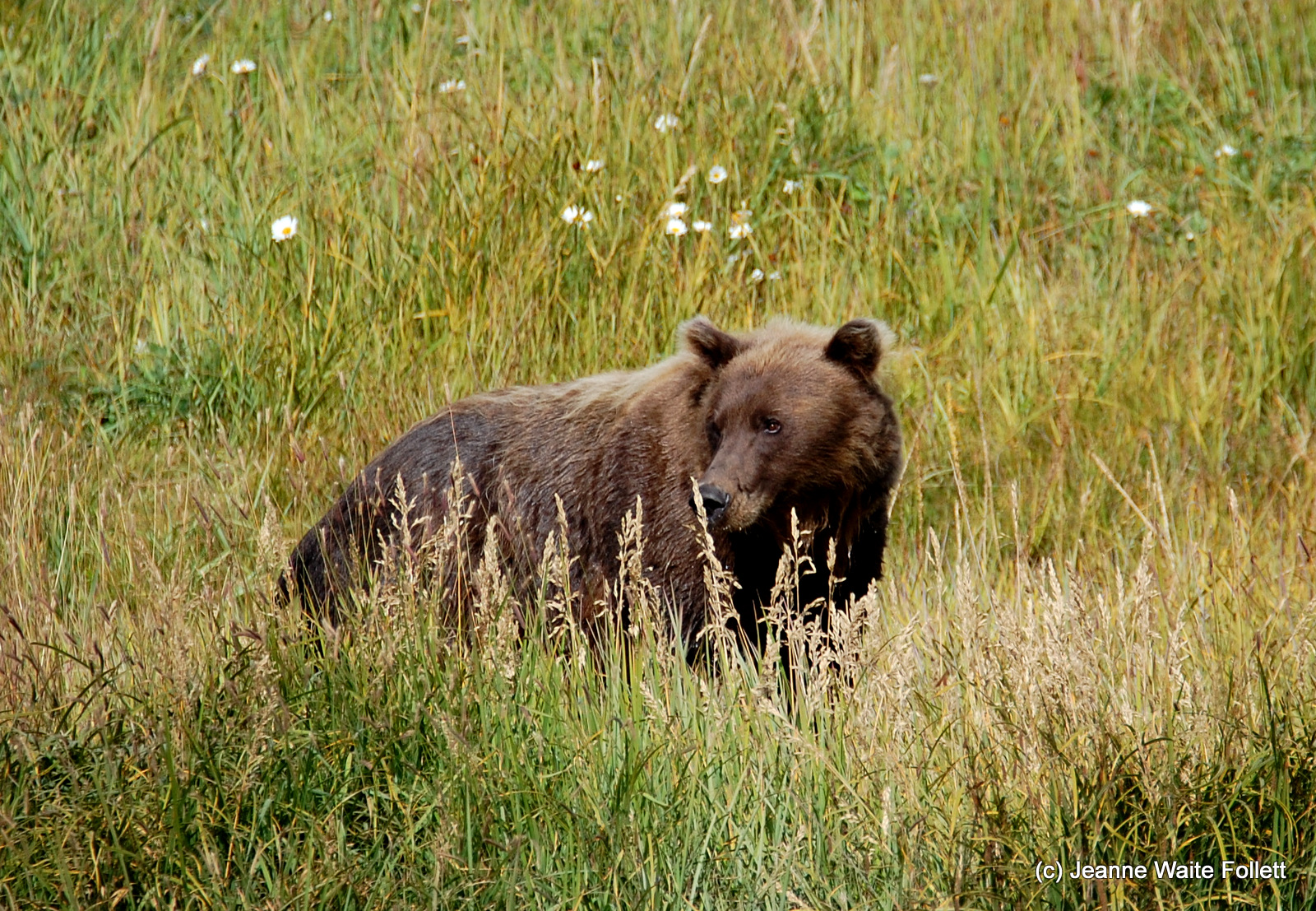 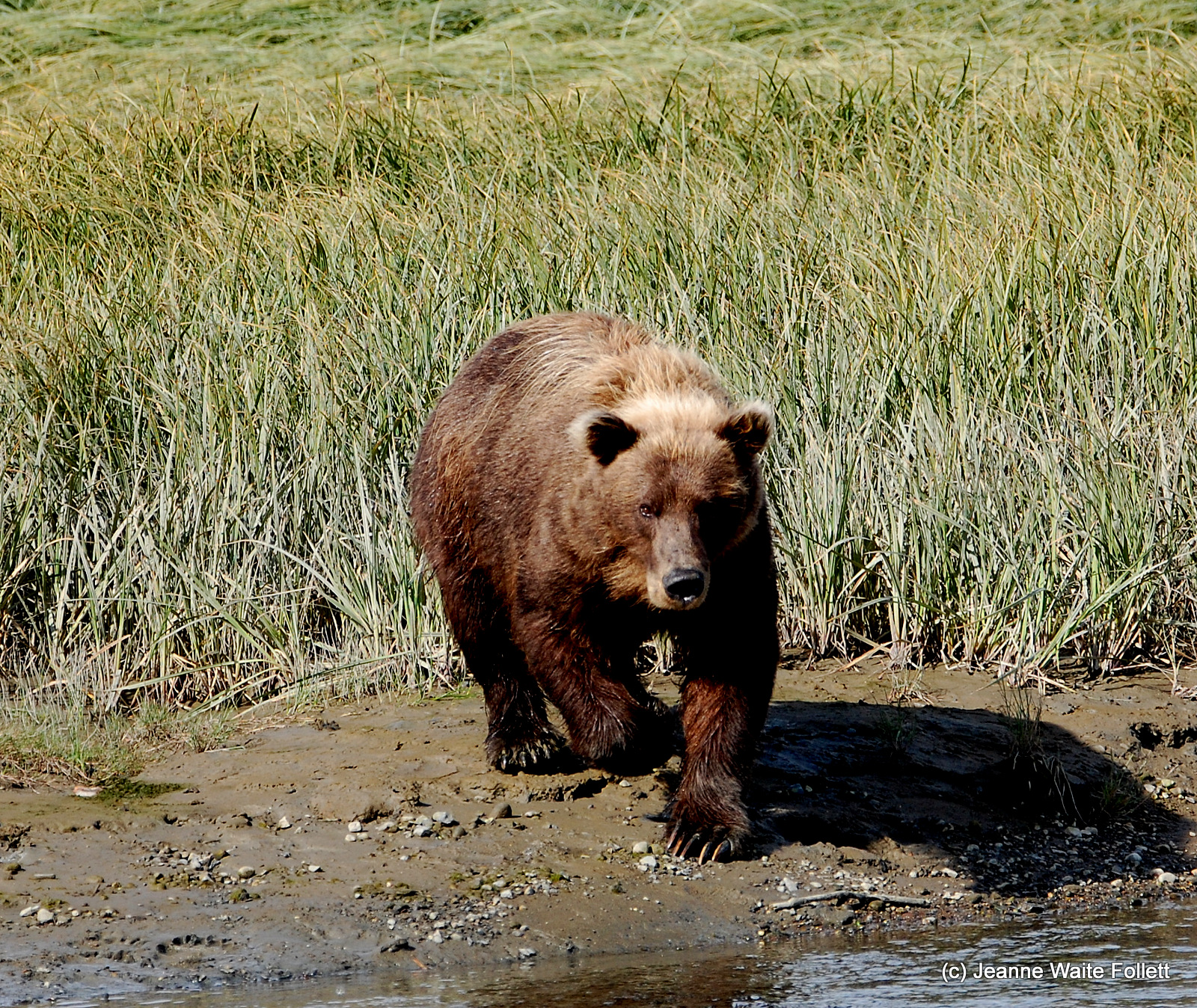 Then it's back to the creek and salmon fishing.   She stands, perhaps to see through the glare of sunlight on the water, or maybe, as Andy claims, to look "bad ass."   I think he's onto something there because Coastal males weigh about 900 lbs, females about 500 lbs, and stand 4 to 4-1/2 feet at the shoulder.   Standing they can sometimes be almost 10 feet high.   That's pretty bad ass! 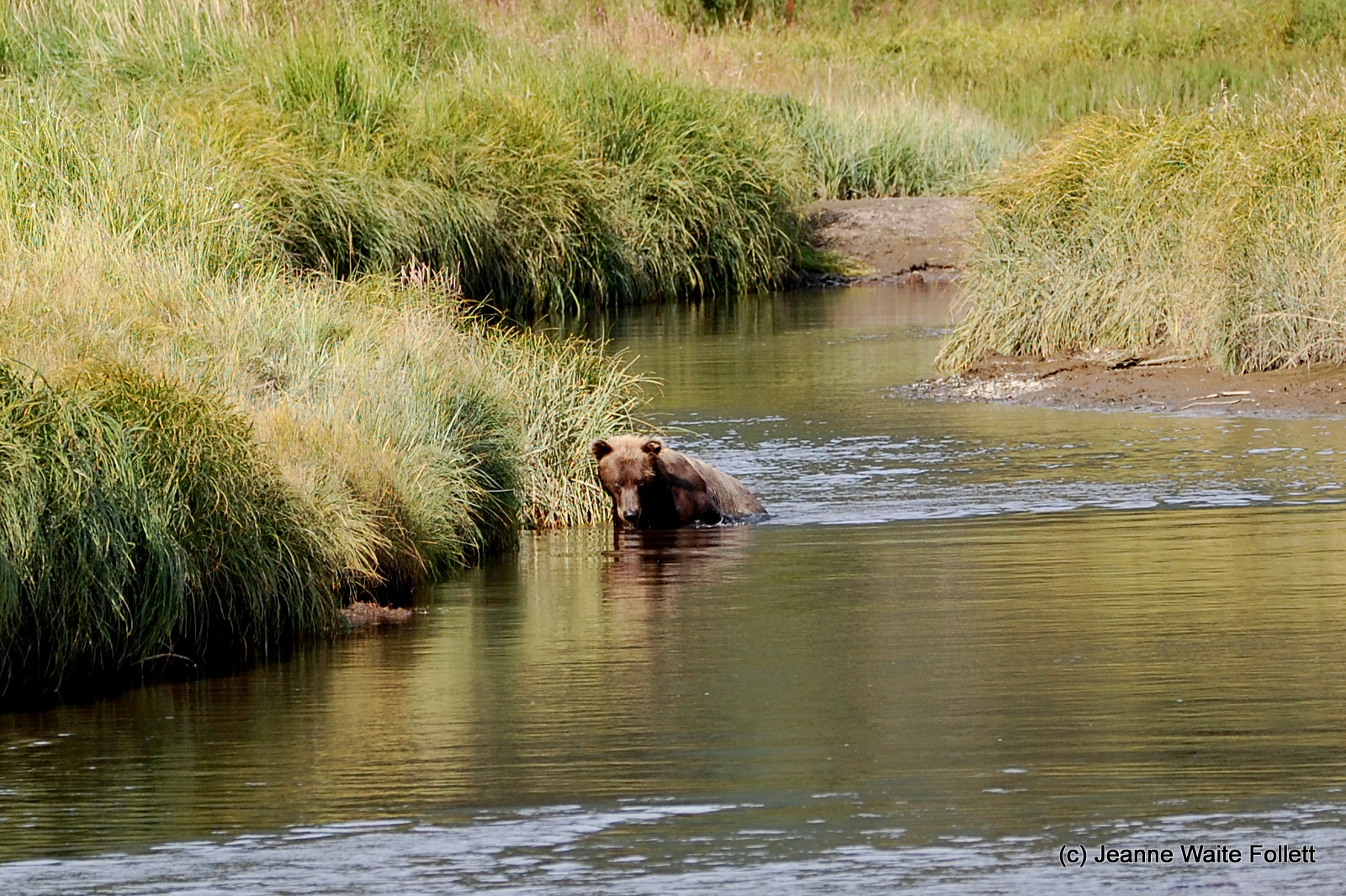 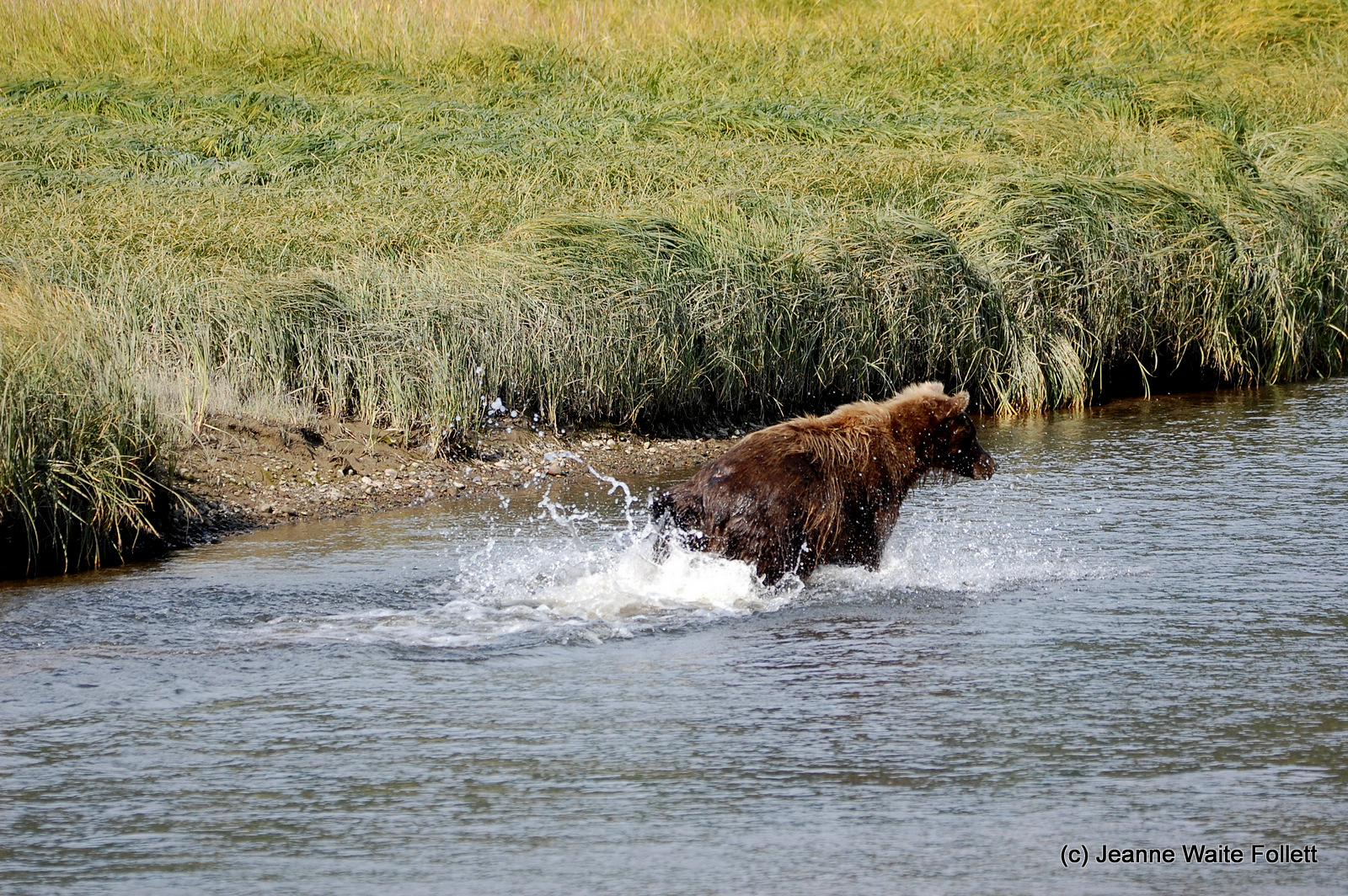 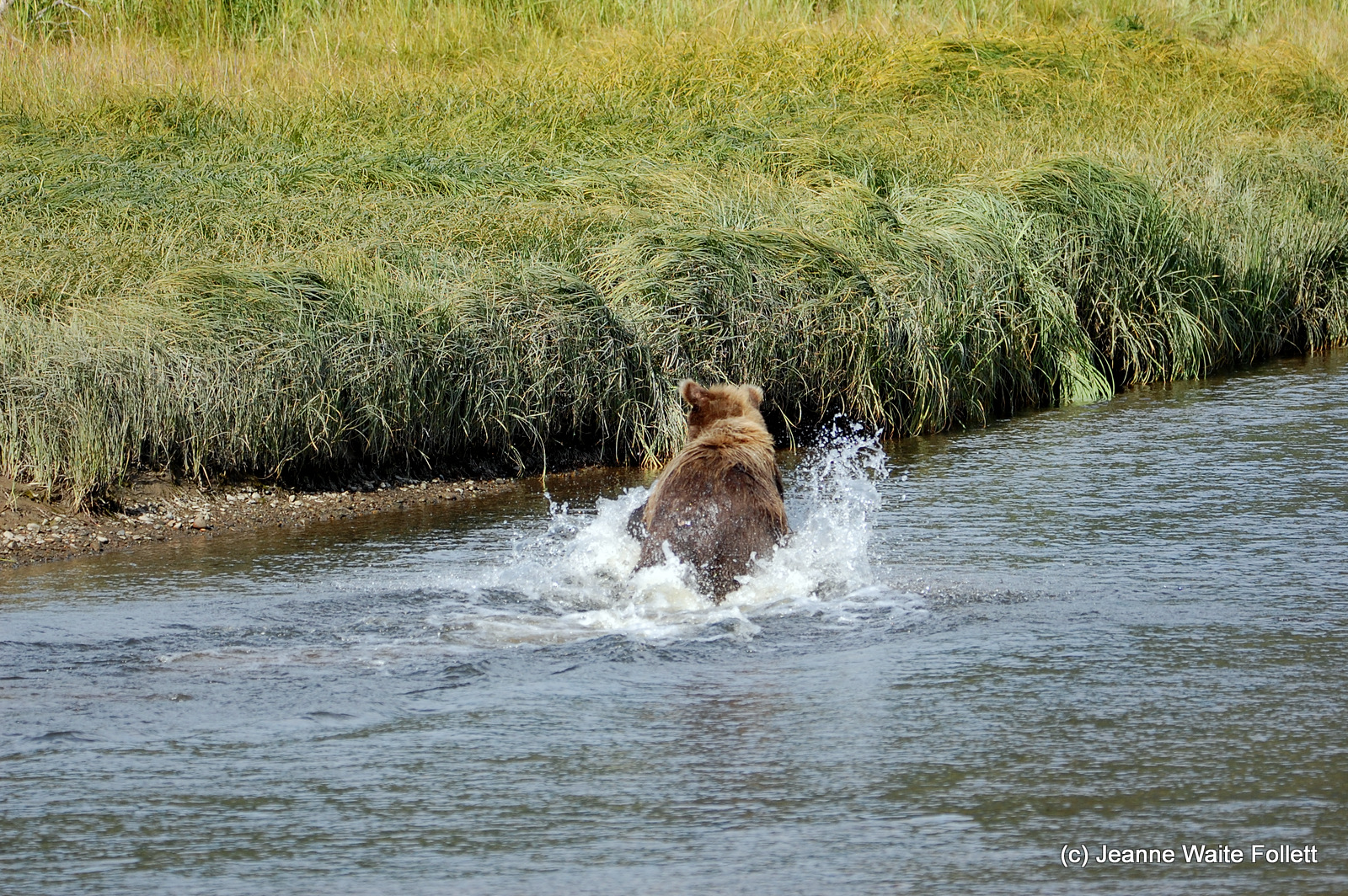 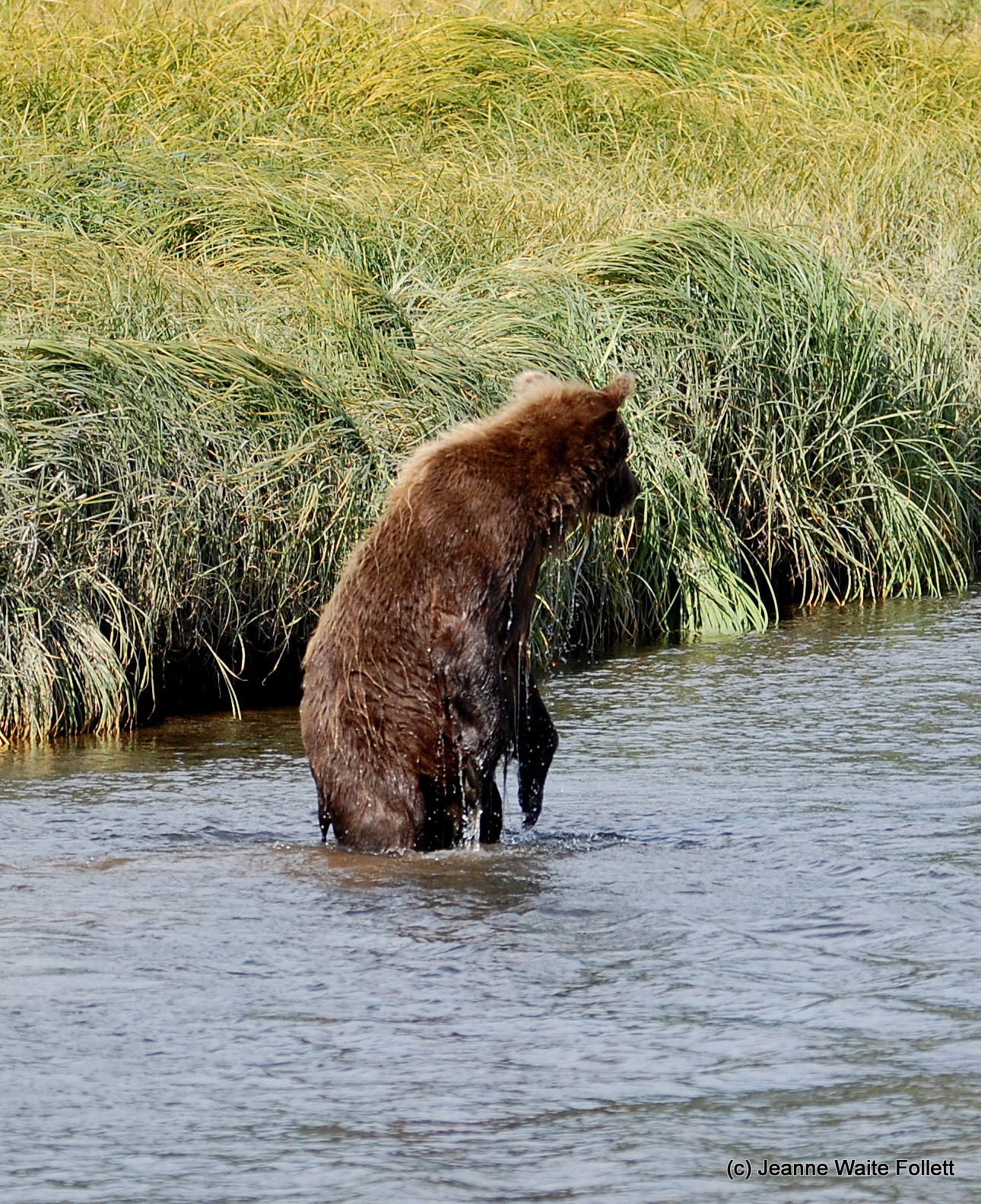 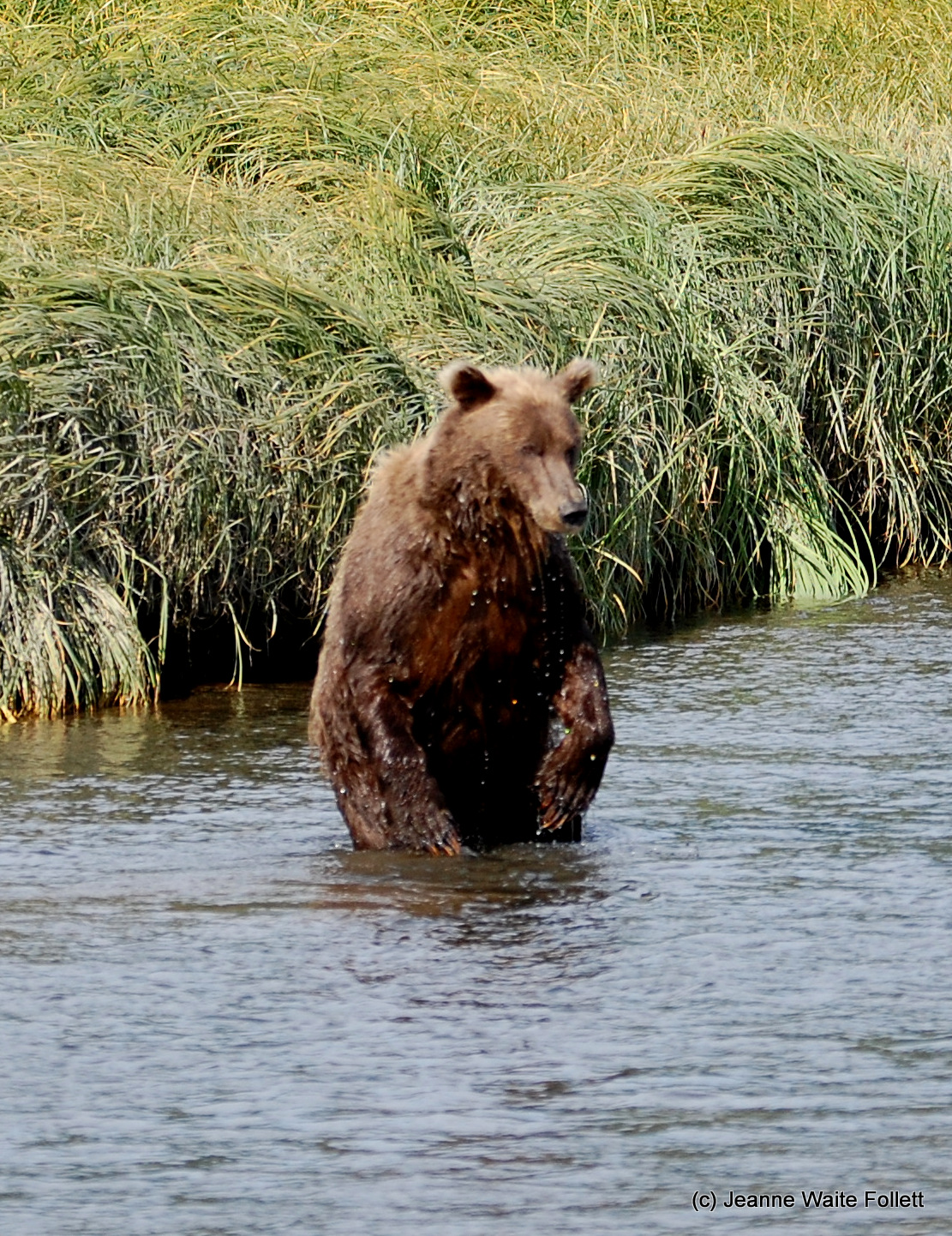 At one point, she crosses to the far bank and turns her back to it.   I watch her closely and see that she is rubbing her back on the bank. 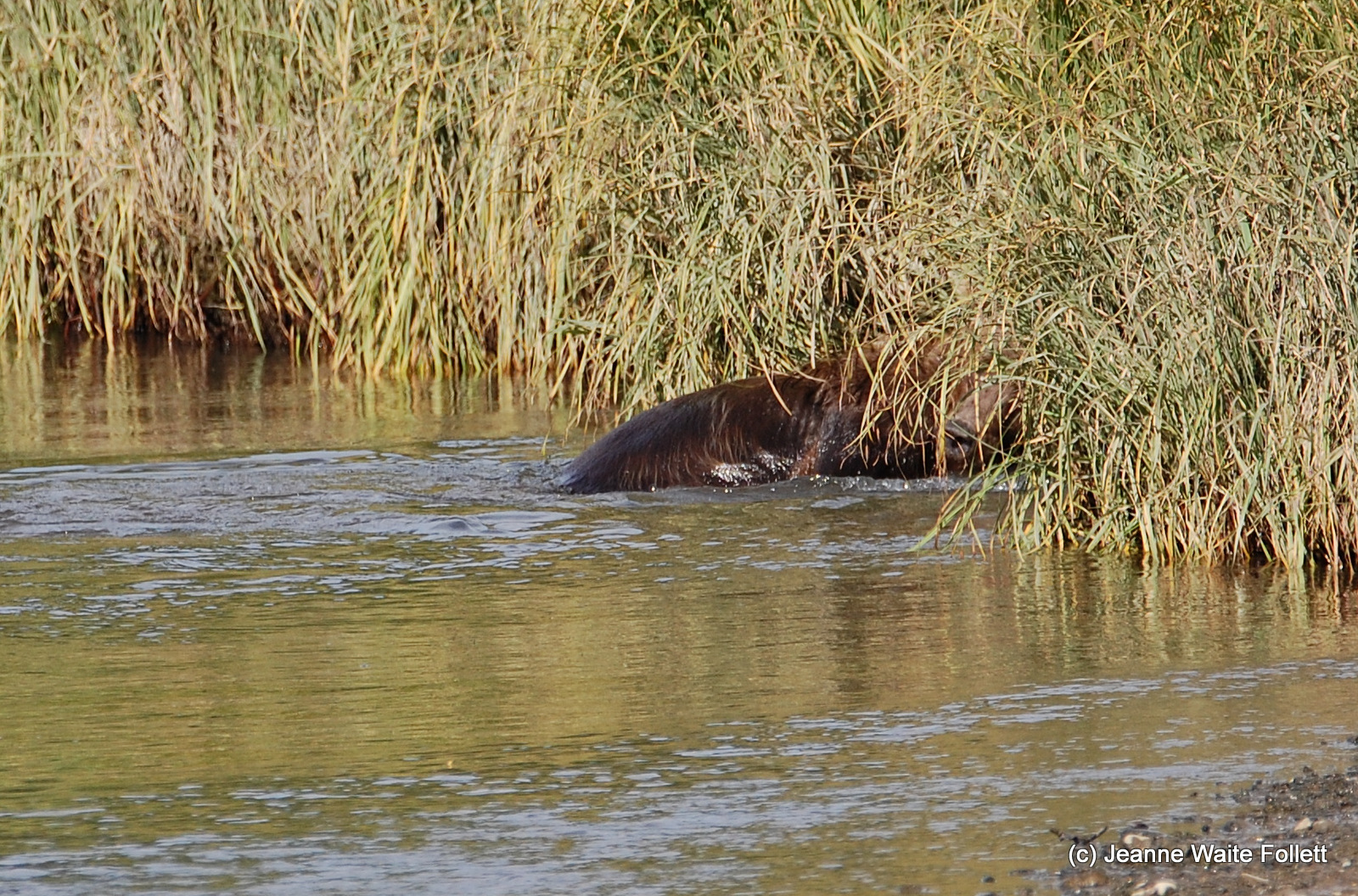 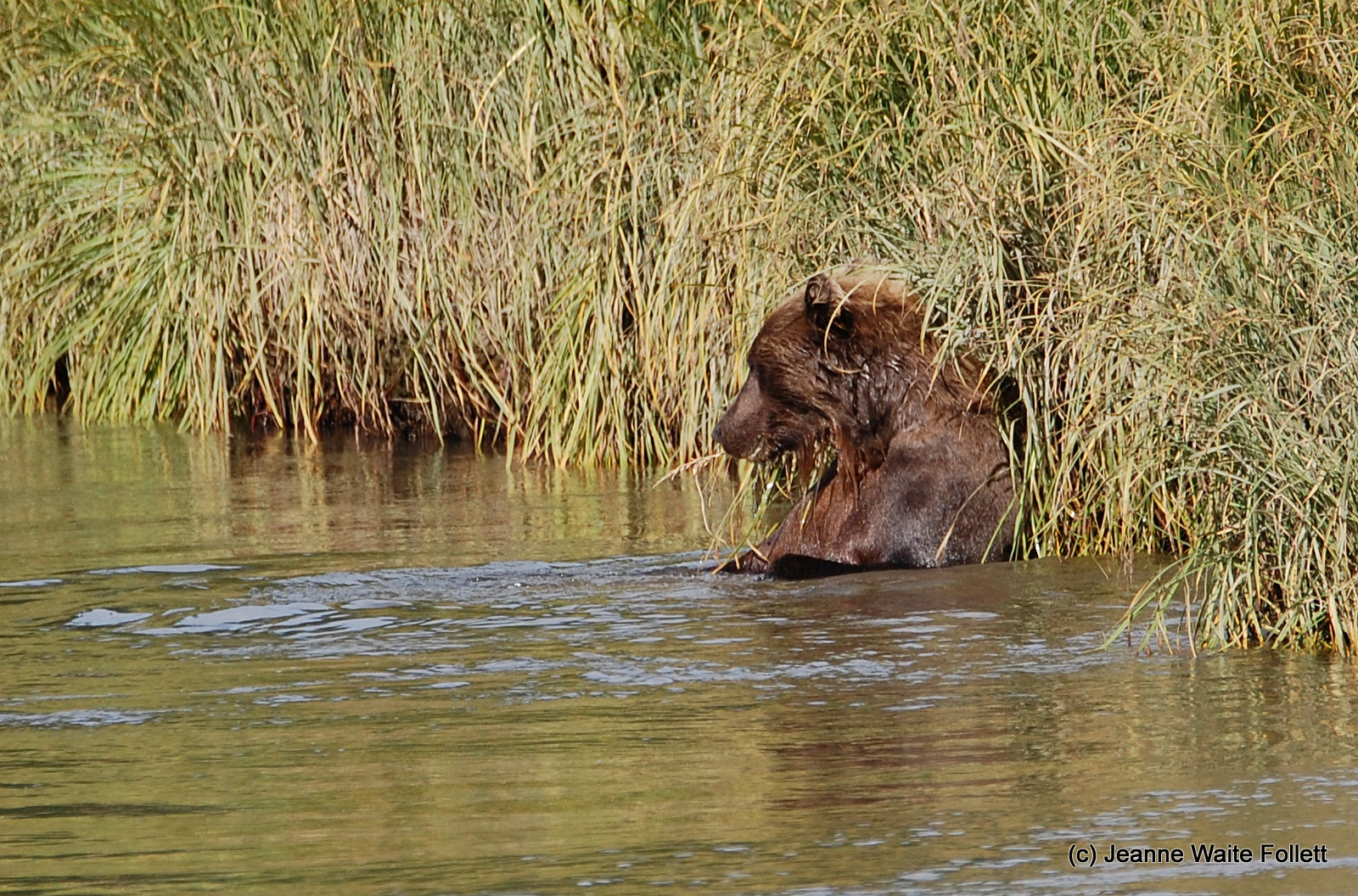 At one point, her hind feet come out of the water and there is a  look of bliss on her face. 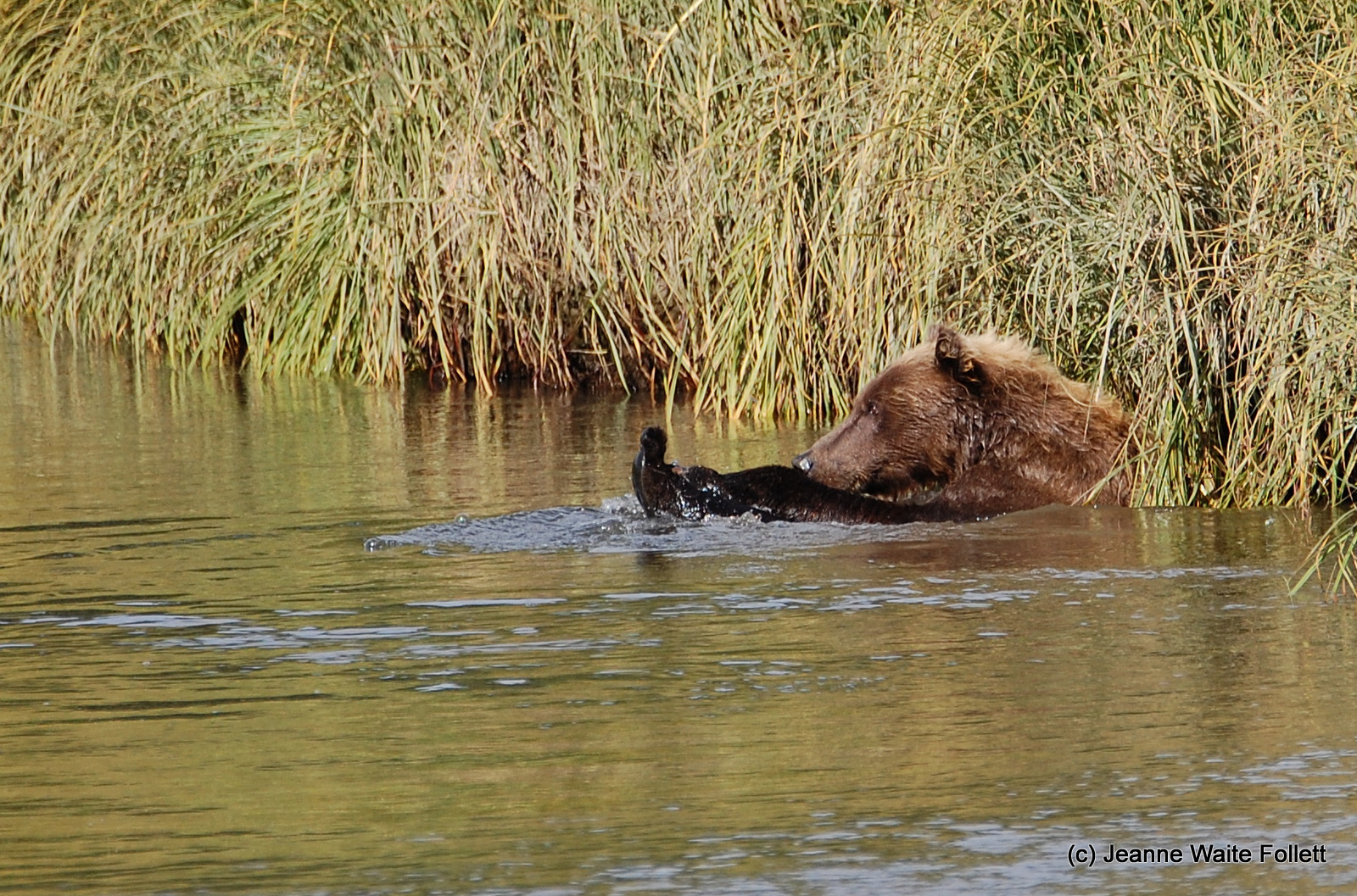 When she turns to walk upstream, I see a large wound on her rump, an indication that it isn’t all salmon fishing and berry picking and back rubs out there for a bear. 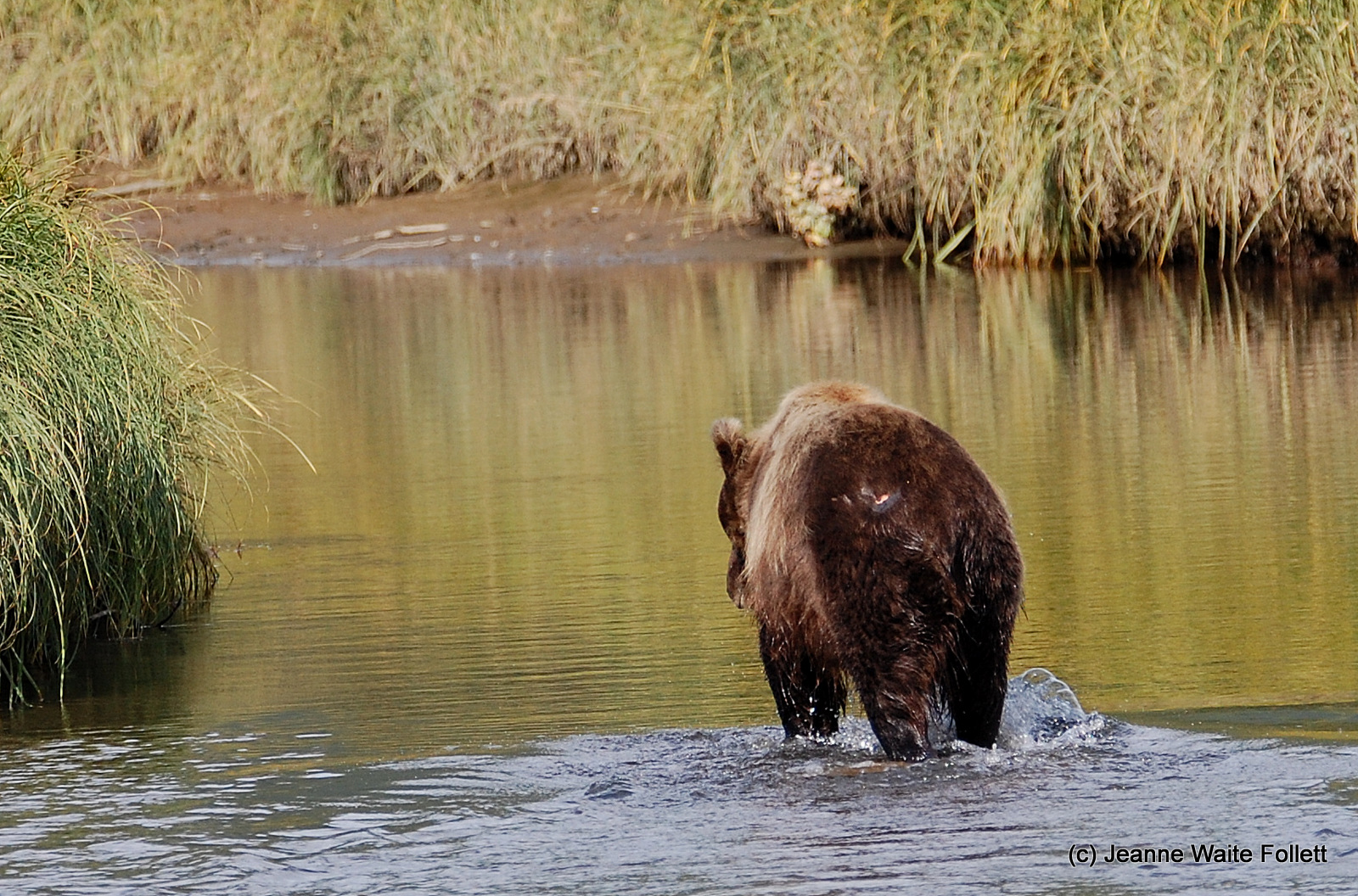 We’re on the beach watching two bears in the distance, both walking our way.   The bear in the rear is much larger. 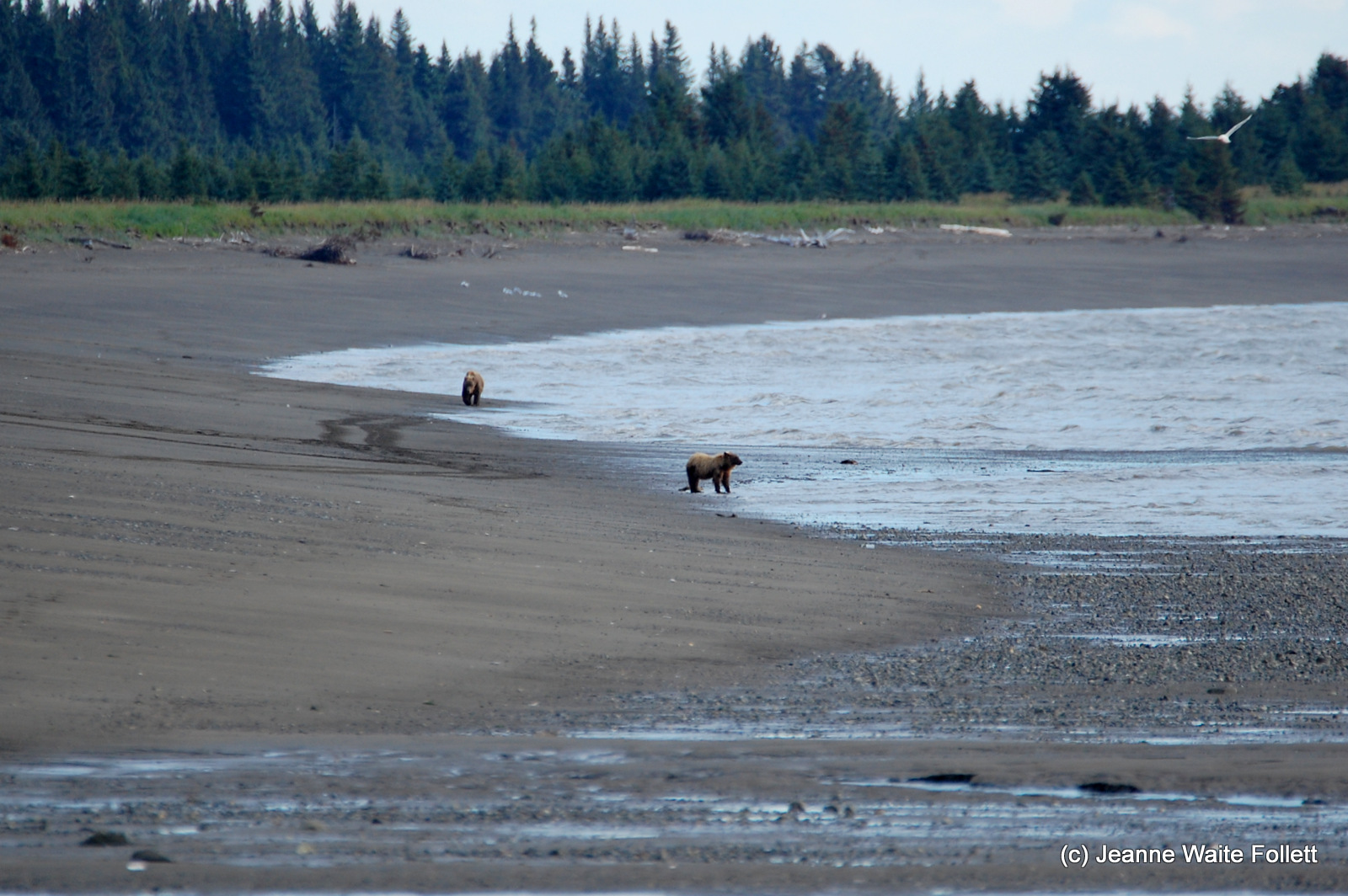 They’re a long ways off, but it appears the second bear is tracking the front bear.


The front bear becomes aware of the other bear's presence and runs up the beach, looking behind her. 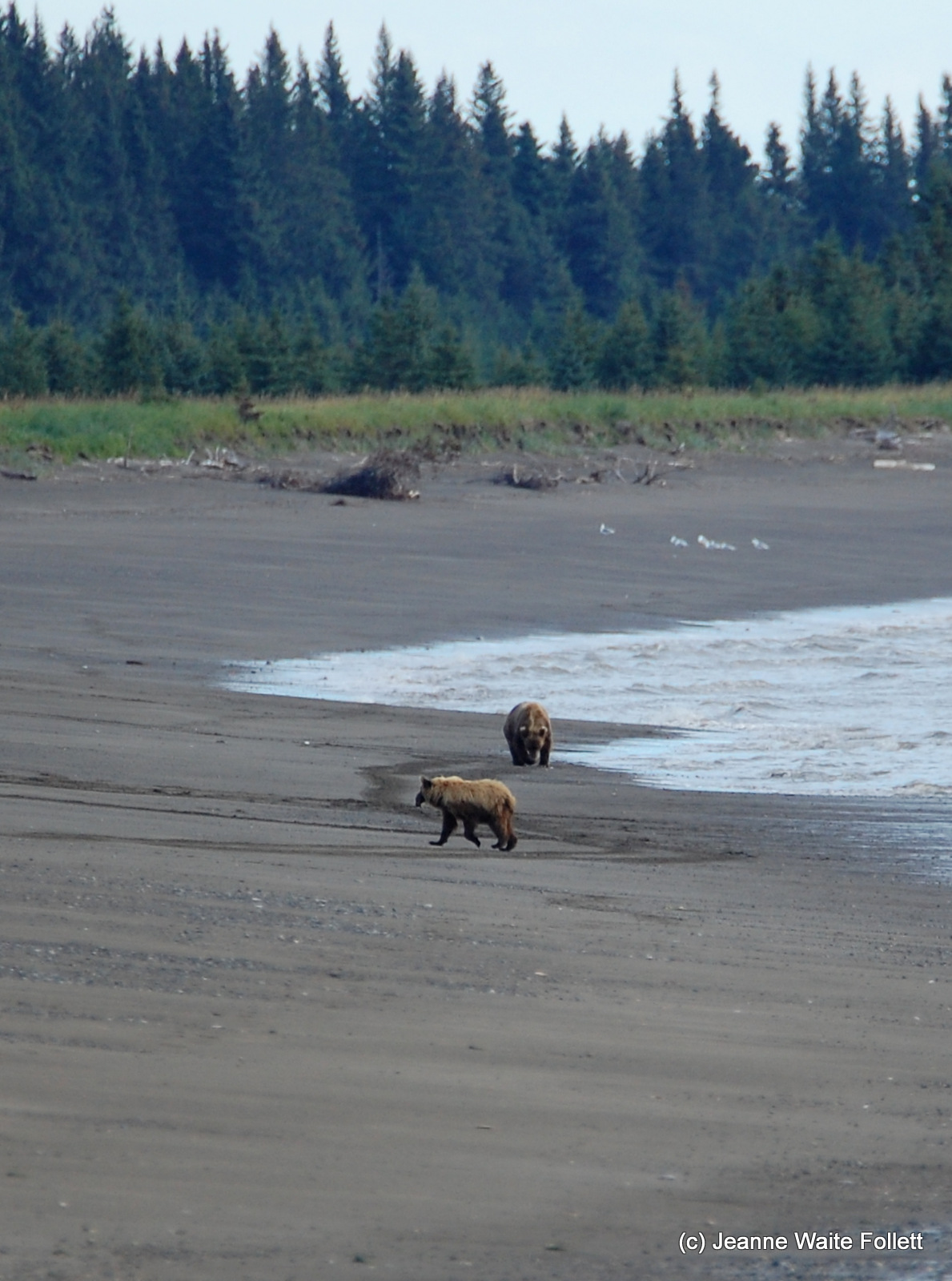 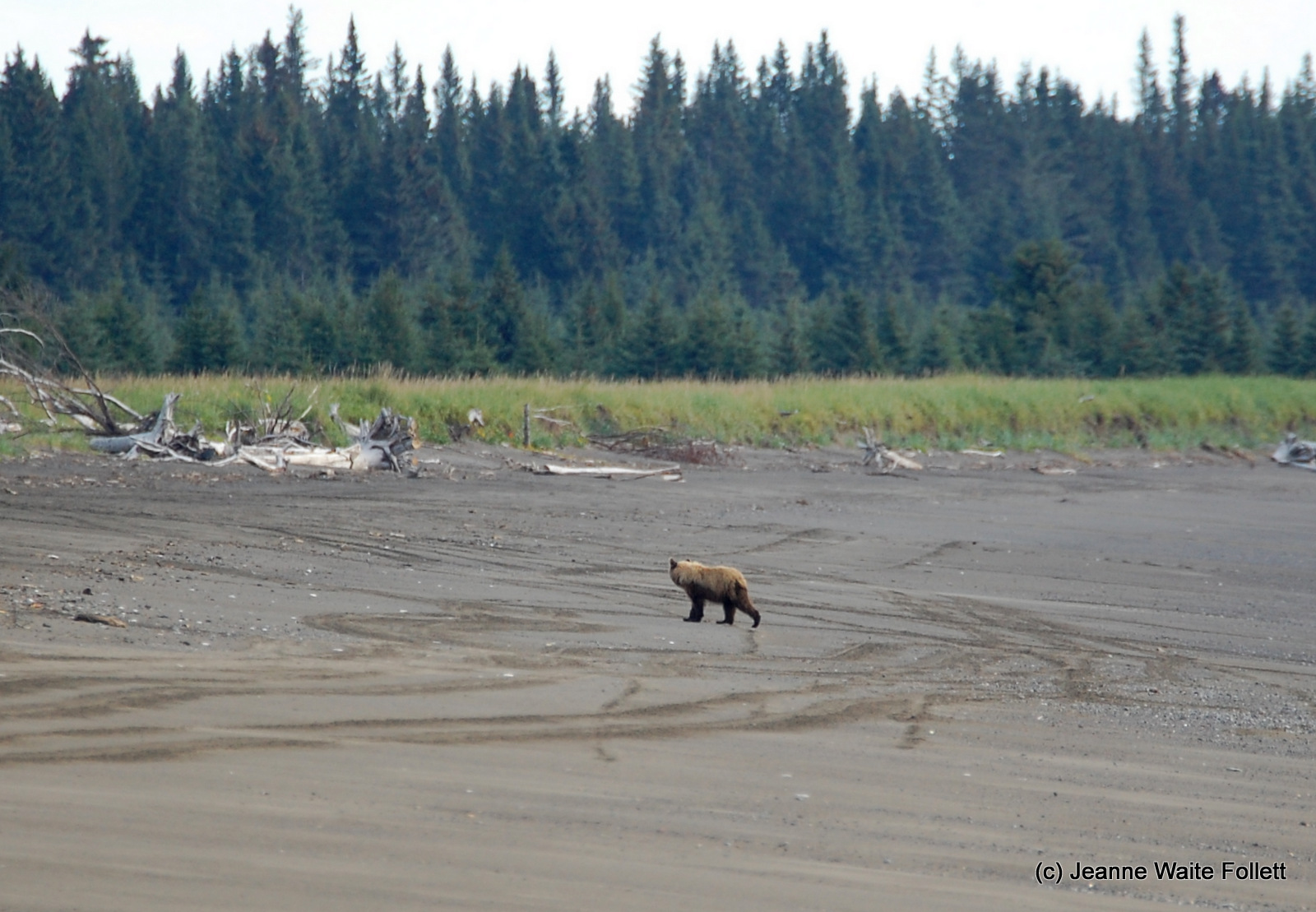 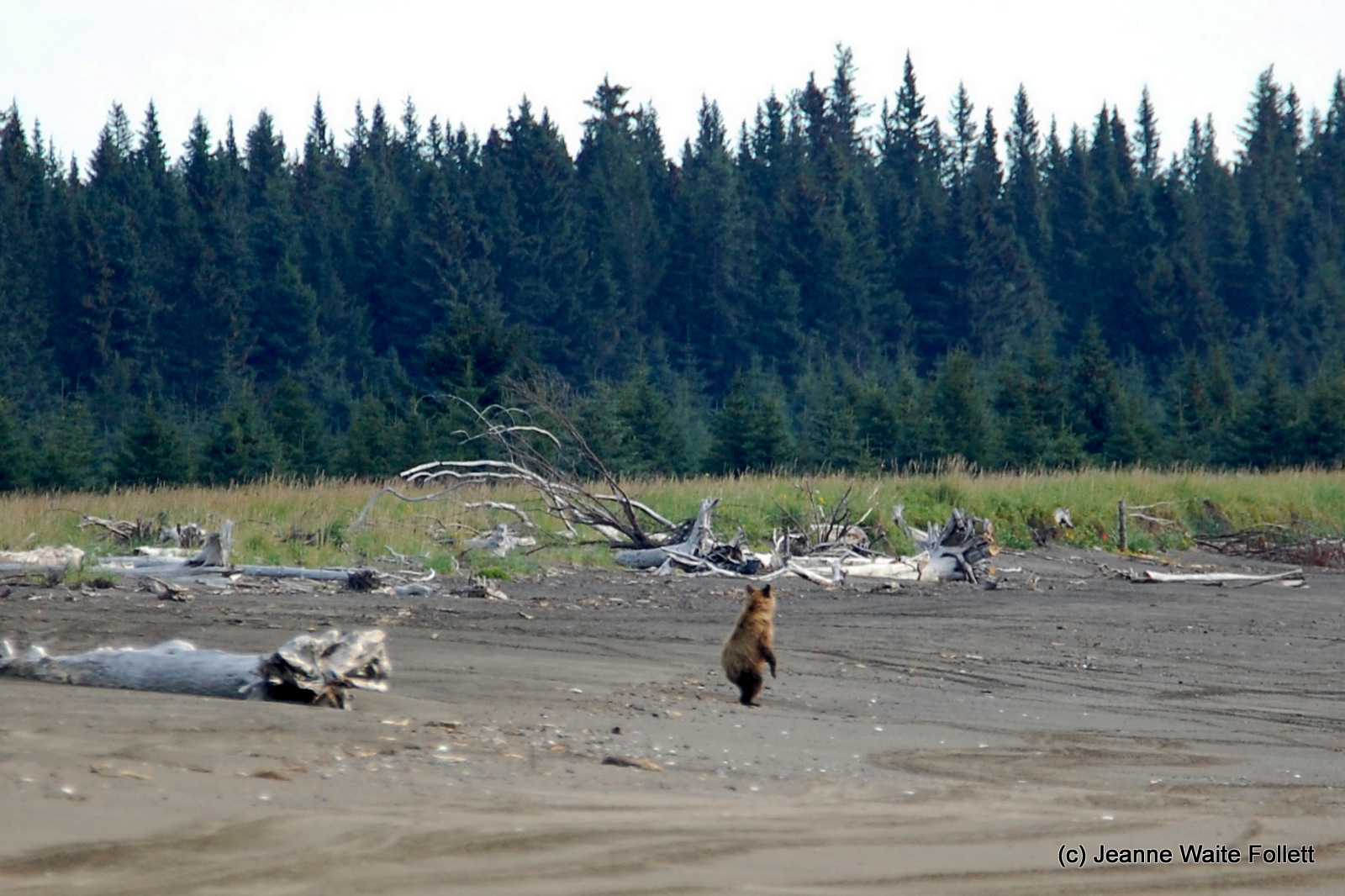 An ATV from the other lodge, Alaska Homestead Lodge, comes onto the beach. 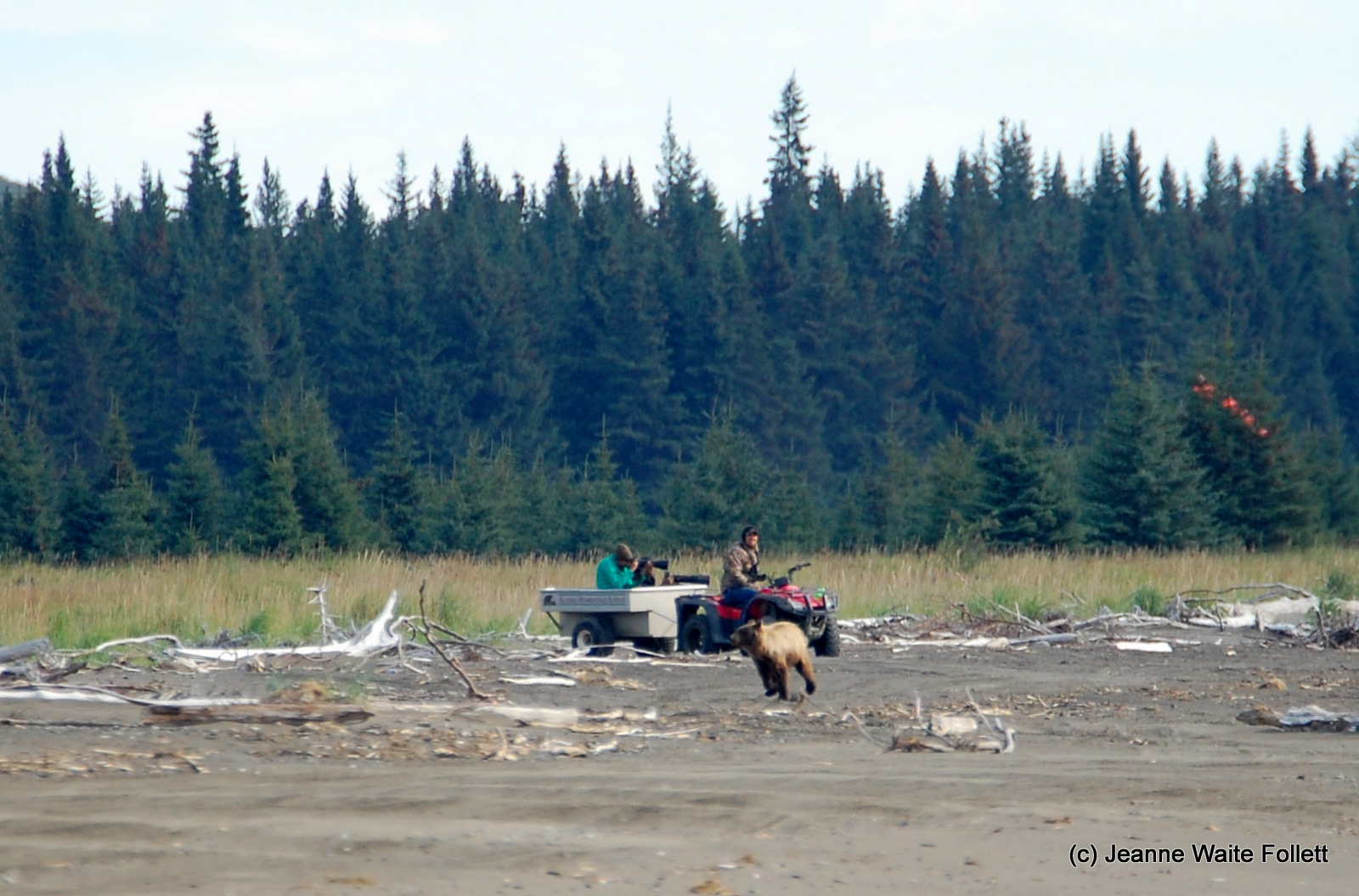 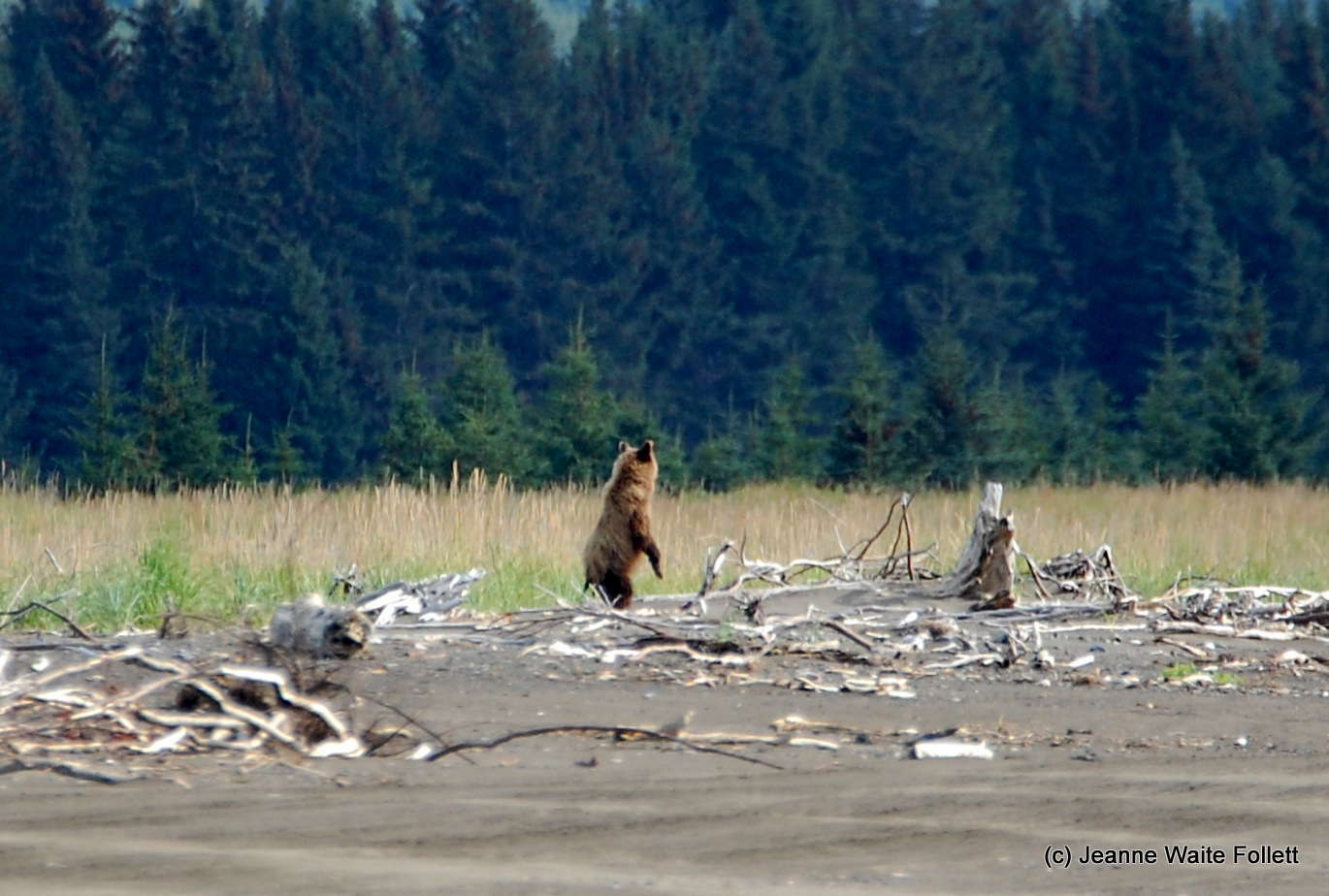 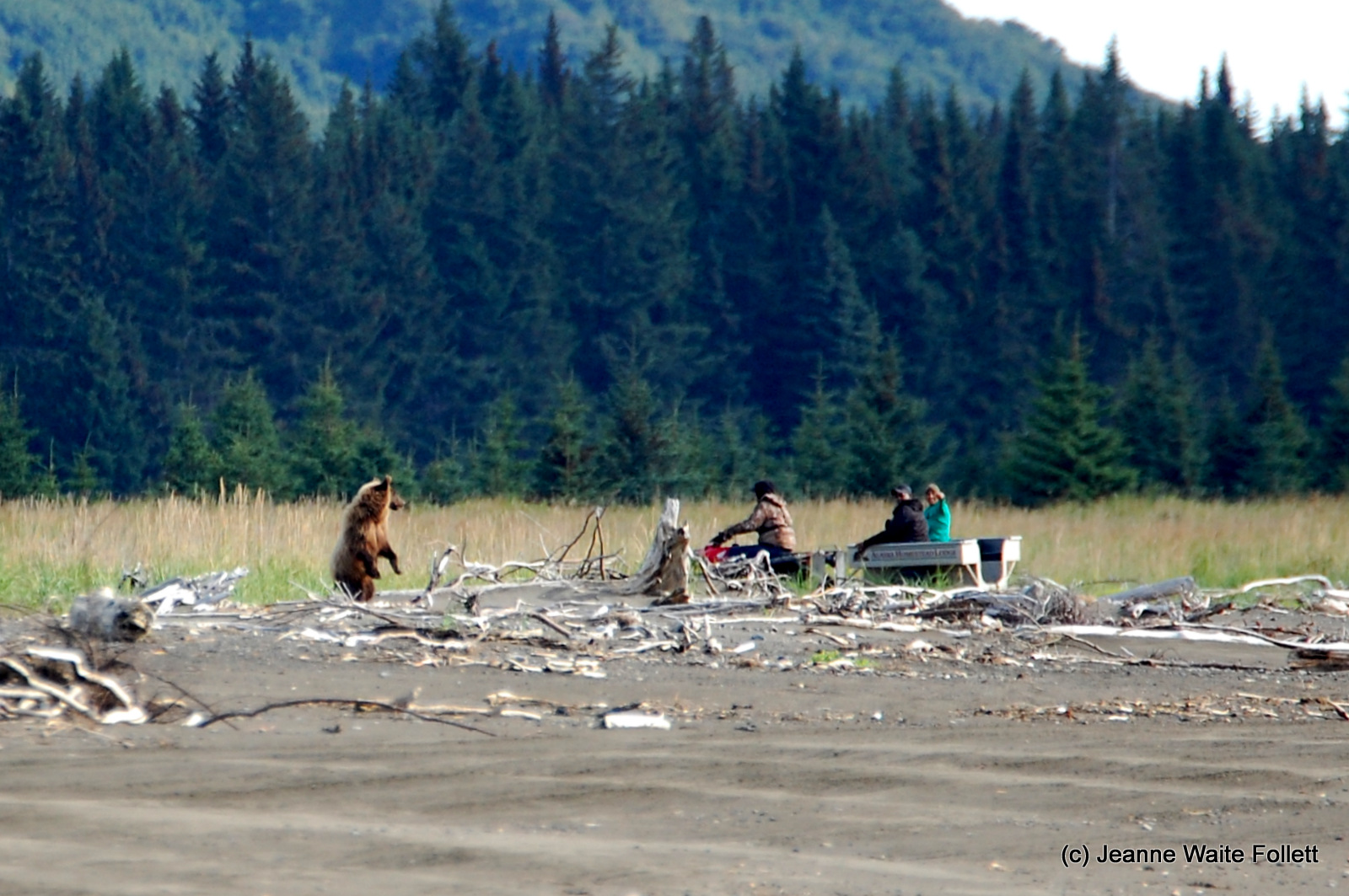 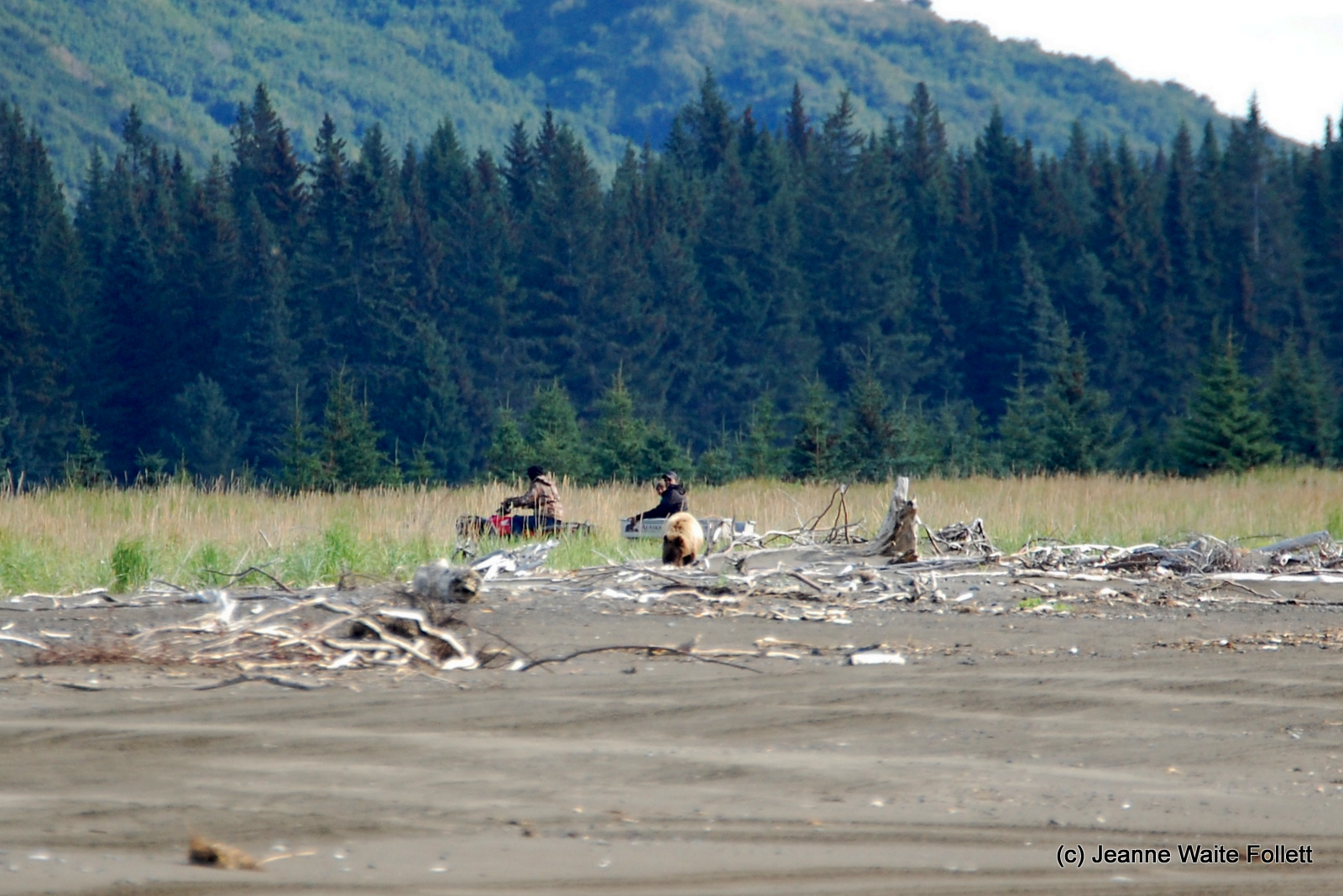 First Bear isn’t the least concerned about the humans.   It’s more interested in keeping far away from Second Bear.   All other bears are a danger to young cubs, especially when unaccompanied by their mothers.

It matters not a whit that you're the third-largest, biggest, baddest, top-of-the-food-chain carnivore on land.   There's danger out there for you, too.