The Fur and Feathers Journals, Ch. 2, The One with the Bullet Holes

Showers, rain, clouds, and fog drift through Lake Hood as we wait, sometimes we're in the waiting room, sometimes we're wandering around outside.  Our luggage is stashed under the wing of  a Piper Super Cub tied down nearby.

Finally, mid-afternoon, it is decided that an attempt to fly to Silver Salmon is a go.   There are two airplanes—a Cessna 180 that holds the pilot and two passengers—and a DeHavilland Beaver that holds six passengers, the pilot, and lots of gear. 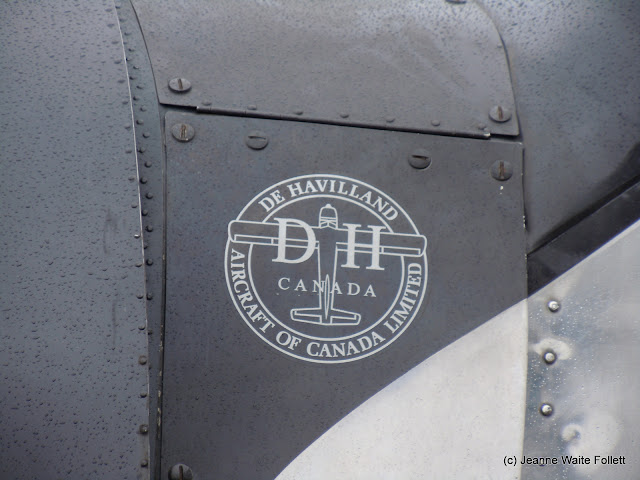 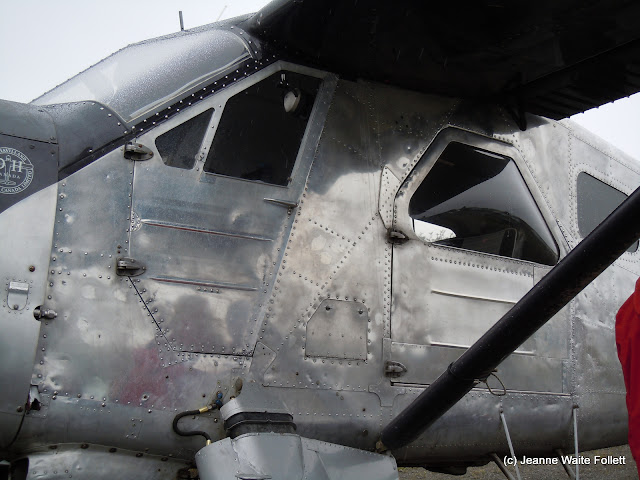 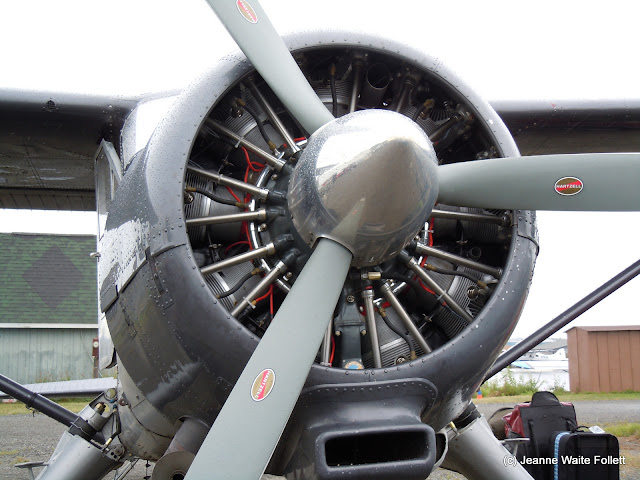 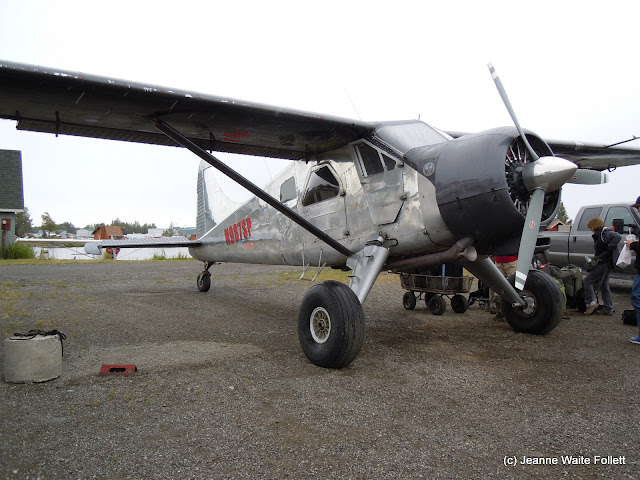 Beavers are the workhorses that built Alaska, some claim.  They have a large payload and perform well on short takeoffs and landings, a particularly beneficial trait for landing on gravel bars, beaches, and small strips.   They can be equipped with wheels or floats or wheel-skis, making much of Alaska accessible to the Beaver.

Many of the famed Alaskan bush pilots flew Beavers or Grumman Widgeons, the amphibian rival for best bush plane.

We have a choice.  I volunteer for the 180 because I’ve never been in one before.  “Over there, the one with the bullet holes in it,” someone says.    I smile, because I think I know what's up....but there's always the chance some angry Sourdough somewhere objected to planes flying over his property and fired off some shots.   It's happened before.


Kate and I climb into the 180 after Tim the pilot stowed a bunch of luggage and gear.   He fires it up, checks with the tower, and away we go into the scudding gray clouds.  Tim flies slightly north until he reaches a point where the upper arm of Cook Inlet is the narrowest, crosses over, and shortly we are on the other side of the inlet and headed southeast. 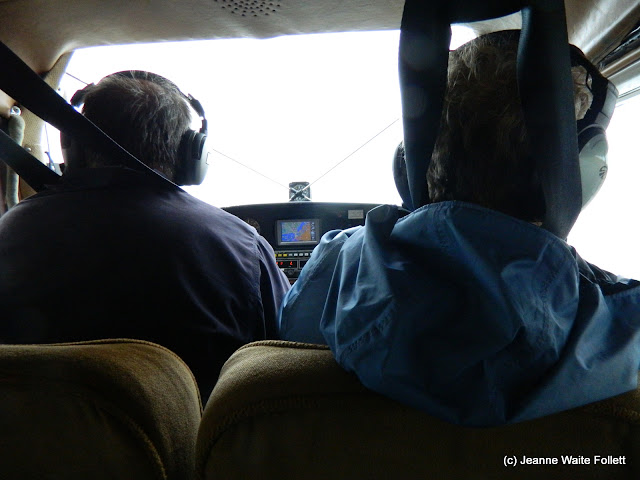 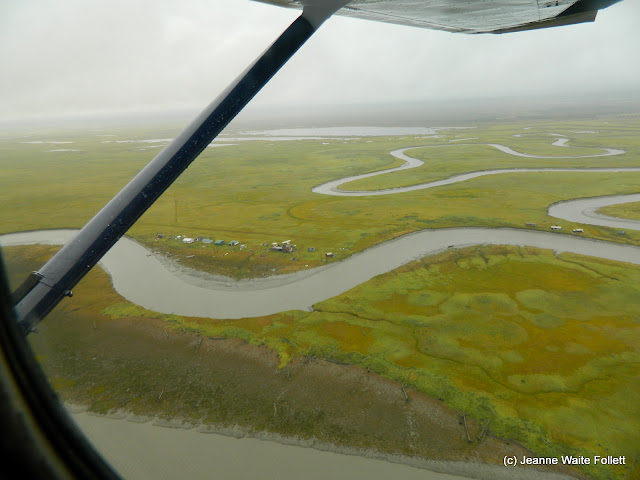 Behind us, the rest of the gang gets into the Beaver and pilot Jacob does the same thing.

The ceiling is low, really low, worrisome for a pilot who needs altitude in the event of an emergency, but ideal for me taking photos out the side windows.  There's a strong head wind that slows our flight. 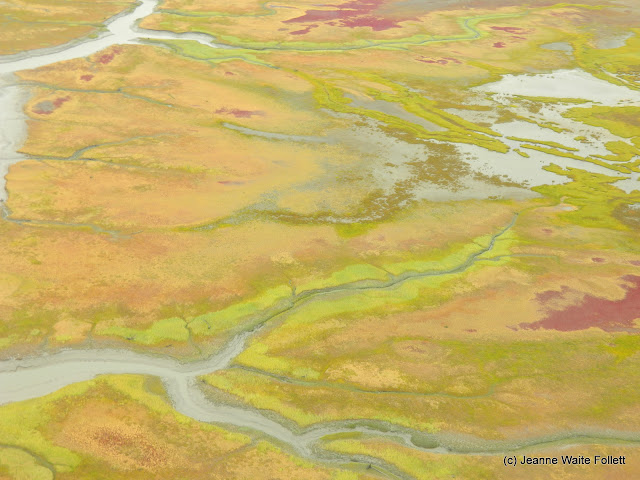 We pass Redoubt almost hidden in the clouds, an active volcano that erupted in March of 2009, spewing ash into the air and causing Anchorage’s international airport to shut down for 20 hours.   Lahars, a mixture of hot rock and water (melted snow) flowed down Drift River like wet concrete, threatening the Drift River oil tank farm. 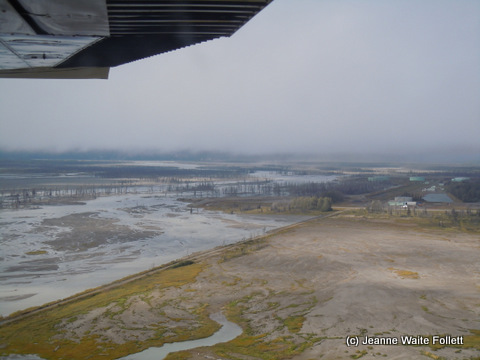 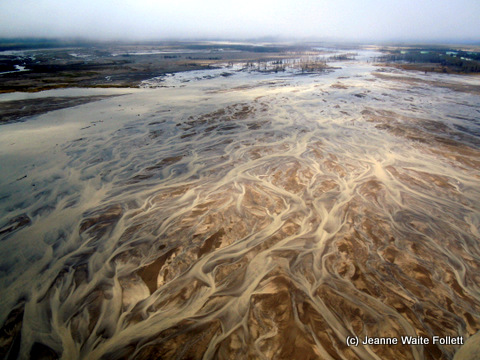 "If (the weather) doesn't get any better soon, I'm going home," says Tim, adjusting the plane's altitude to take advantage of "clearer" spots.  One good thing about it is that we're hugging the shoreline, in case of emergency.

I listen through headphones to the chatter of pilots up and down Cook Inlet.  They check in with other, advise their positions, and let traffic control know where they are.


Eventually, we are close to Silver Salmon Creek and Tim steers the airplane through a notch in the coastal Chigmit mountains, a subrange of the Aleutian Range. 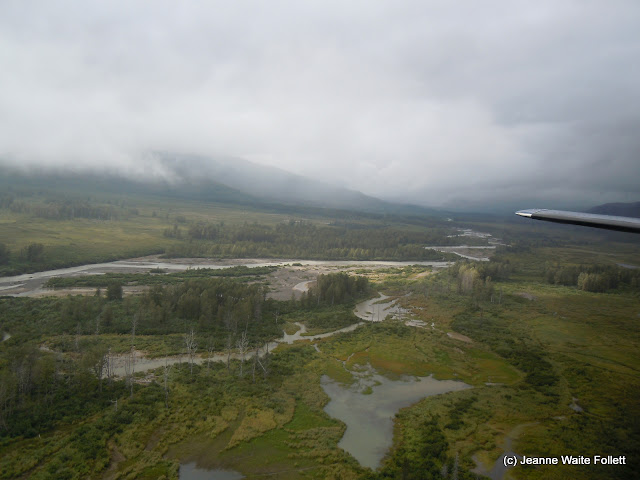 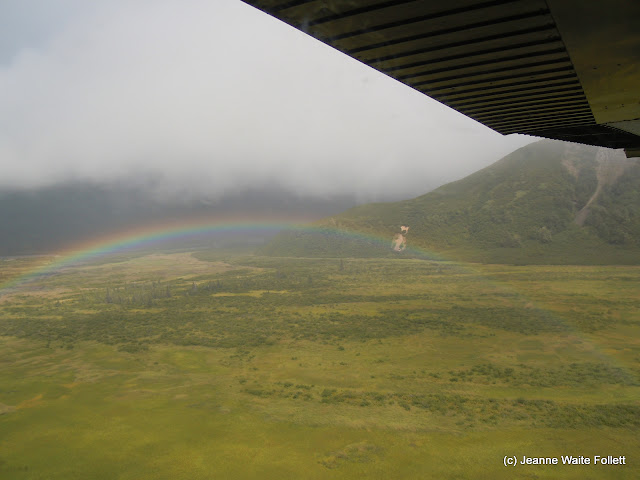 On the other side, he passes over the lodge, letting everyone there know to fetch us after we land at the beach.   I've been scanning the land, but can see no bears.

And we are there.

There is no sign of the Beaver, which is a slower plane than the 180.   It had experienced a rough engine while crossing the upper inlet and returned without incident to Lake Hood.   Everyone switched to another Beaver and took off again.

Kate and I, along with all the gear the plane had brought, get into a trailer behind a four-wheeler, or ATV, and are transported a short distance to Silver Salmon Creek Lodge, set back across a field from the coastline.

“You’re with Ron?   He’s one of our favorite guides,” says a woman I later learn is an owner along with her husband.

While we wait for the Beaver and the others in our group, lodge staff hurry to make up our rooms.   That gives me time to explore the premises.
Posted by Gullible at 9:32 PM