The Fur and Feathers Journals, Ch. 3, In Which I Discover Quinoa is Edible!

The Beaver arrives with the rest of our group and Ron calls a meeting.  We’ll have a brief intro with David, who owns the Silver Salmon Creek Lodge, and his son Oliver first, he says, then go out to find bears.

The cabins are ready and we stash our gear, get our cameras and equipment ready for a quick getaway, and assemble around the fire pit.

David introduces himself and Oliver and talks about the lodge in general.   I’d been expecting a safety talk, how to behave around bears, but there wasn’t a mention of it.   When he finishes, it’s after 5 P.M.   Dinner is at 7, so we haven’t much time to find the bears.

We’re all in knee-high rubber boots, the footwear of choice when seeking bears because it sometimes requires walking along muddy stream banks or wading across the streams.  Rick has the ATV ready, with two trailers hitched behind.   Each trailer seats six people comfortably, three on each side, seated on a padded seat.   Except when on the beach, the ATVs must remain on established trails.

Once we’re loaded, Rick heads south from the lodge.   Everyone’s looking for bears.   Rick drives across the stream at a place called the creek crossing.  It’s an obvious name, but everyone knows the exact location when you say, “The creek crossing.”

He heads through a meadow of wild celery, lupine, yarrow, rattlebox, and other beach vegetation and exits onto the sandy shore of Cook Inlet.  There, he turns north and  takes us to where Silver Salmon Creek flows into the inlet. 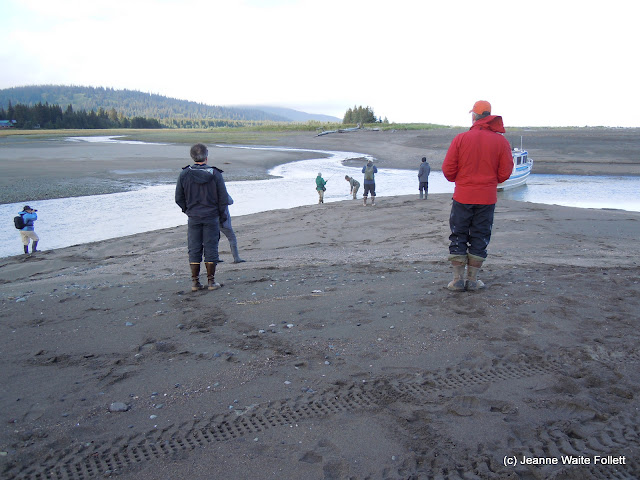 Block their path???   Just how close are we going to get to them, I wonder.   I bought a 150-600mm lens for this trip.   I didn’t intend to get close enough to block their path.   I’m already almost clinging to the others.

And what about that no sudden movements?   Does that mean I can’t drop into a fetal position and cover the back of my neck?

Nearby,  fisherman has a salmon on his line.   Silver salmon are fun to catch because they fight so much.   Brian, a lodge guide, removes the fish from the water and the two display it for photos. 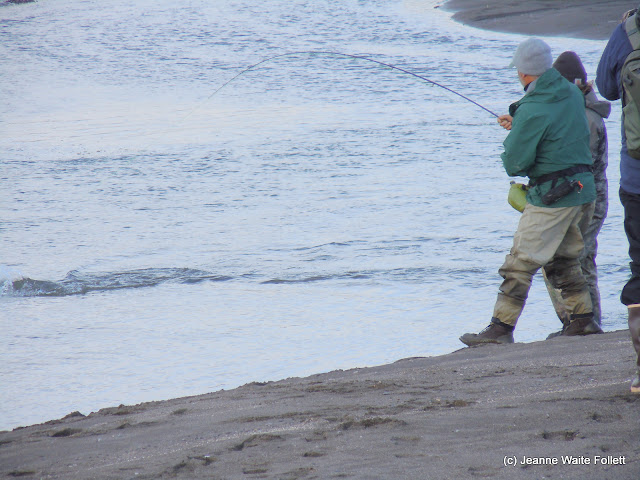 We’re still waiting for our first bear.   Kate wanders upstream; I wander up to the edge of the meadow.  (I confess I first told Ron that I was going to walk thirty feet or so to where some flowers are blooming.   I take that ‘stay in a  group” thing seriously.) 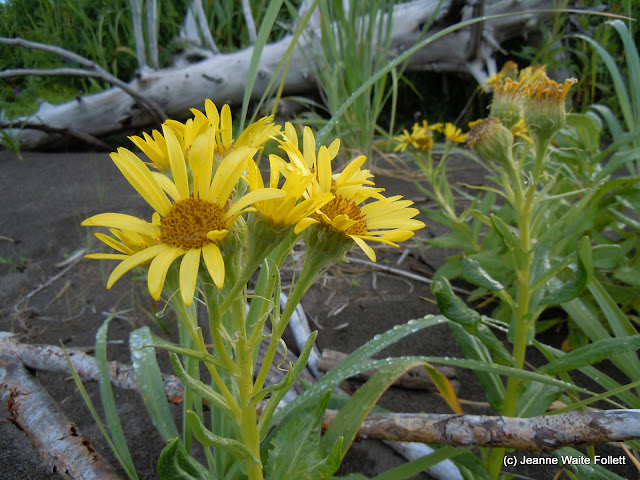 I sit down on a driftwood log and survey the scenery as I wait for a bear.

After a while, it’s time to head back to the lodge for dinner.  No bears, but the weather has improved drastically.

We take our seats at the front table where there’s a bowl of quinoa salad at each setting.   This should be interesting, I think to myself.   I’d seen the chef dicing apples.   Later, a huge mound of cooked quinoa was cooling on the counter.

I take a bite.   It’s delicious!   Quinoa, apples, dried cranberries, walnuts, and feta cheese.   Who would have guessed?   I keep eating, considering making this my entire dinner.

But, there’s a platter of BBQ ribs on the table in front of me and I’ve been craving ribs for a couple months.   I reluctantly set aside the quinoa salad. 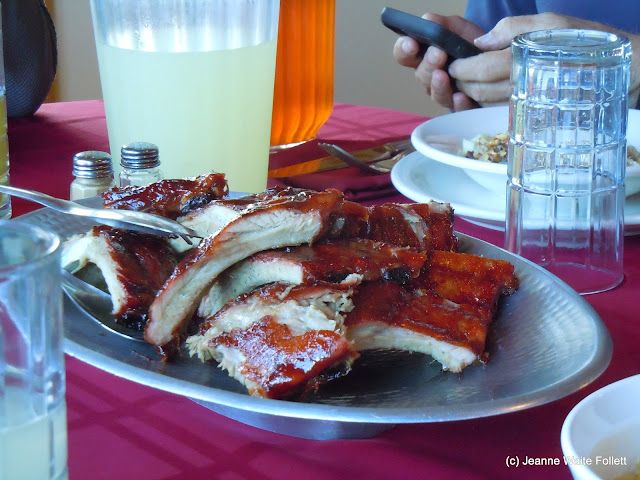 I’m still pondering my discovery that quinoa is indeed edible when Ron suggests we save dessert for later and head out to find the bears.   Everyone agrees and we abandon the dining room, grab our gear, and load up.  The other guests of the lodge linger for dessert, which means we will have the beach all to ourselves.

And darned if it wasn’t worth it!

Where is Silver Salmon Creek? 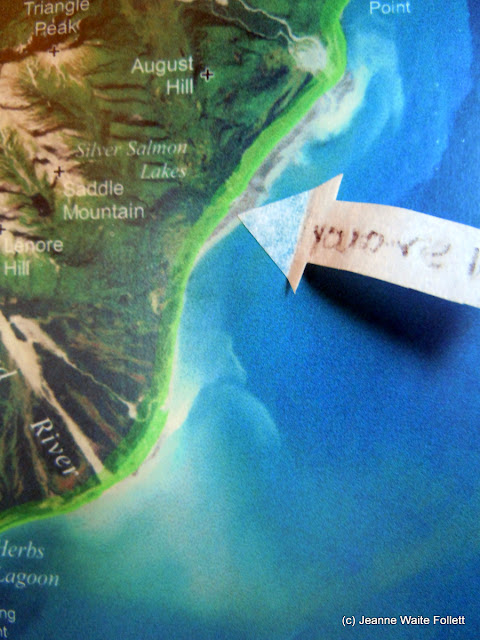