Yeah, I was so cool


I was going to be all cool about it.  You know, the old “butter wouldn’t melt” kind of cool.   Alaskans aren't easily impressed, or so we tell ourselves.

In fact, when three Marine Osprey helicopters flew over my house a few days ago, I didn’t even go outside to watch them, just kept playing Candy Crush on the iPad and wondering about the noise.

Why, just last night I told myself it was no big deal—those three tilt-rotor Ospreys scheduled to fly over again on their way to Seward.  By the way, if you’re going to fly from Anchorage to Seward the most common route is to head up Turnagain Arm on the south side of Anchorage and then fly through the mountain passes.

That’ll put you right over my house with about thirty miles to go.   In fact, if you have a little mechanical problem, or the weather looks impenetrable down by Moose Pass where two passes intersect, why, you could just land right in back of my house on the airstrip my husband built.

I day-dreamed about one of those Ospreys having to put down on that gravel airstrip.   Of course, the other two wouldn’t abandon their buddy and would land, also.  Why, I’d march right over there and invite them in for coffee.   Oh, snap.   I don’t drink coffee.  I puzzled about what I could offer them to drink, something besides Coke Zero.   Oh, well, I could let them use my restroom.

So, I went to bed last night.   Then I got up and put a pair of pull-on lounging pants and a tee shirt on the floor by my bed.   I went back to bed.   I got up again, went downstairs and got my good camera—the one with the telephoto lens—put it on the nightstand, aimed in the right direction for grabbing it in a hurry, and went back to bed.

Well, my brain flipped a switch at 7:45 A.M. and I was instantly awake.   I pulled on the lounging pants, grabbed the camera, and started downstairs.

Then I caught myself.   Geez, Jeanne, you can at least get fully dressed.   Be cool, I said, and got dressed.   Then I went downstairs and waited.   Thirty-nine degrees with a north wind and I opened a north-facing window so I could hear the Ospreys coming.

I waited.   TV volume on low or muted.   Every half hour or so, I heard engine noise, grabbed the camera and ran outside.   Just jetliners on their way to Anchorage, on their normal route.

I waited some more.   More engine noise, so I went outside just as two Ospreys flew over, flying high and fast!   Took photos. 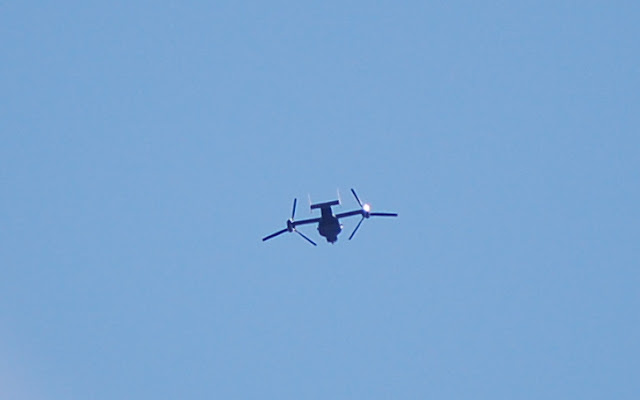 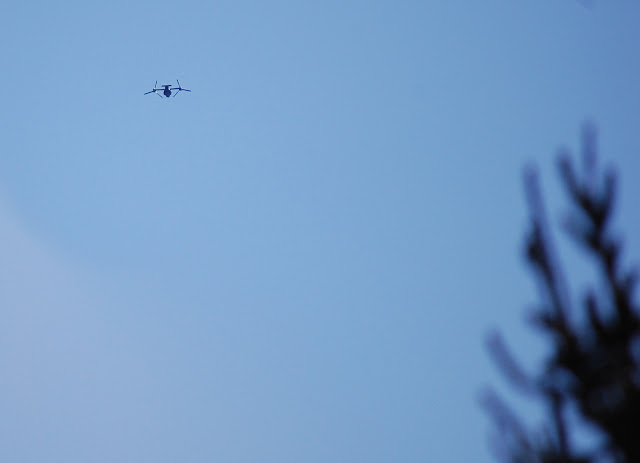 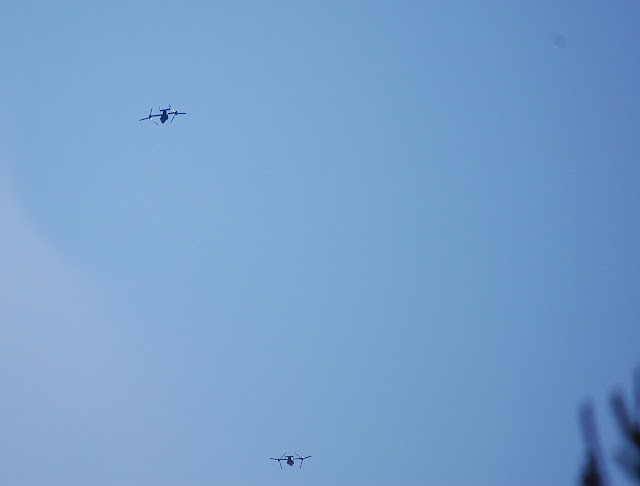 Wait!   Only two?   There were supposed to be three.   I went inside.   A few minutes later, more engine noise.   I went back outside.

And there they were:  a huge Osprey flying low with a two-helicopter escort.   Right smack dab over my house!   How cool is that?   Cooler than I was, I’ll admit. 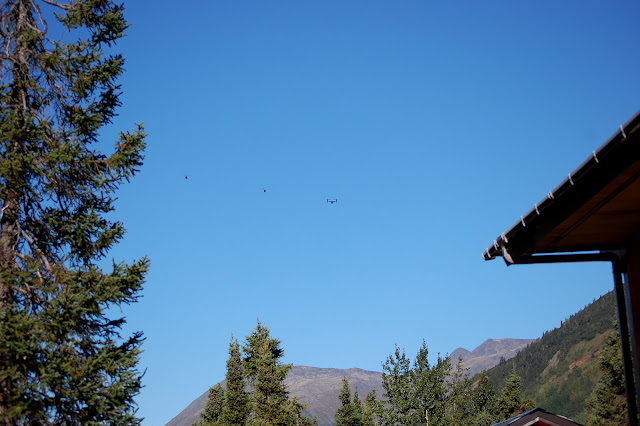 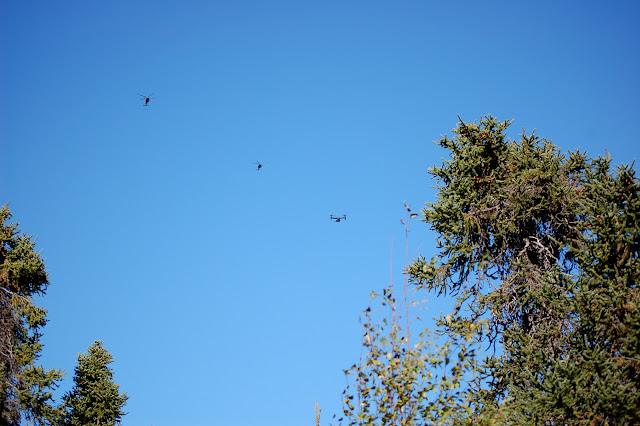 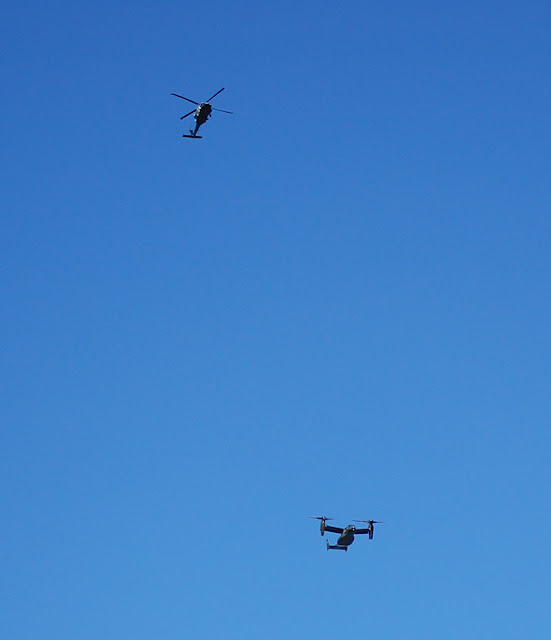 And I stood there on my back deck taking pictures,hoping that someone in those choppers realized I was holding a camera with a telephoto lens extended to the max and not some kind of weapon. 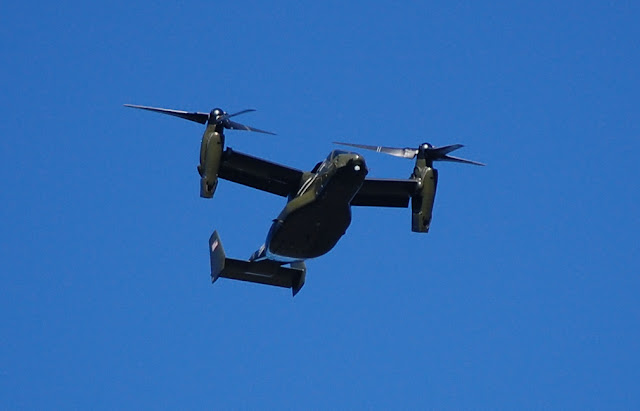 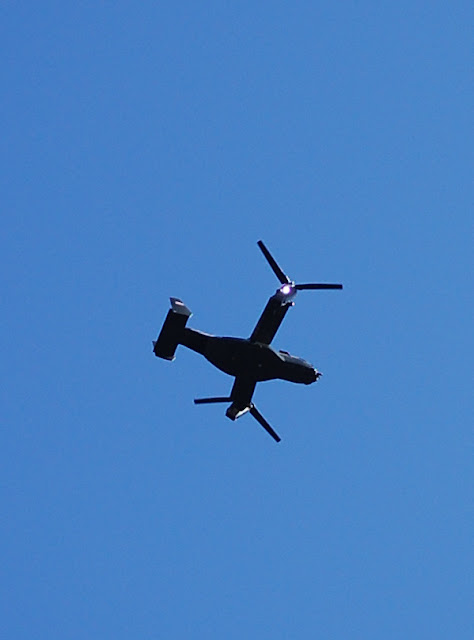 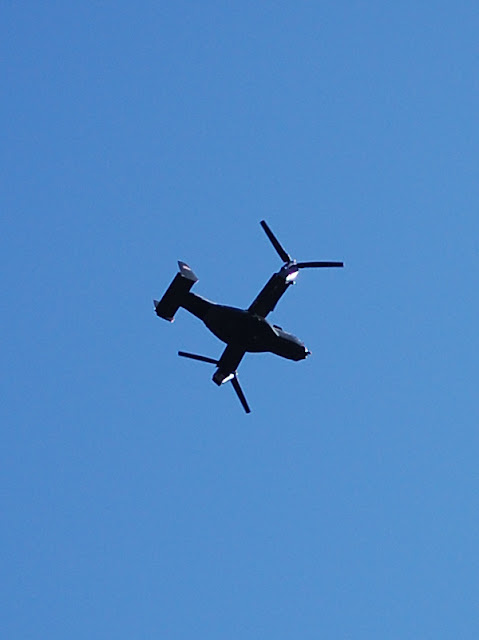 Why would someone think I was holding a weapon and aiming it at a helicopter?

Because one of those choppers was Marine One with President Barack Obama, POTUS, on board and on his way to Seward to visit Exit Glacier National Park and cruise around Resurrection Bay on a Coast Guard cutter.

Yep, a presidential chopper-cade flew right over my house! 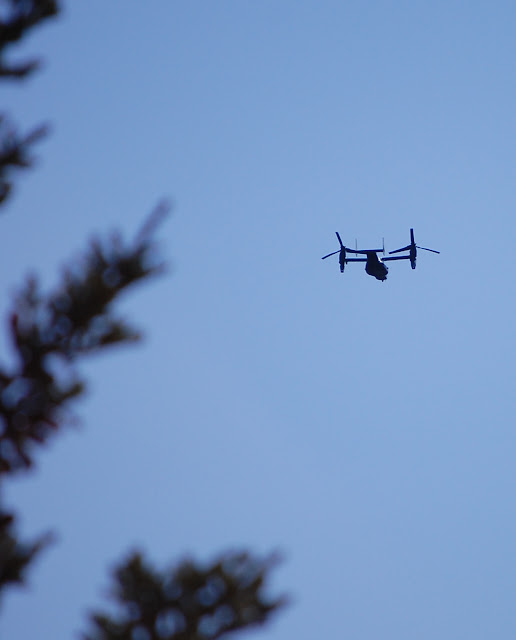 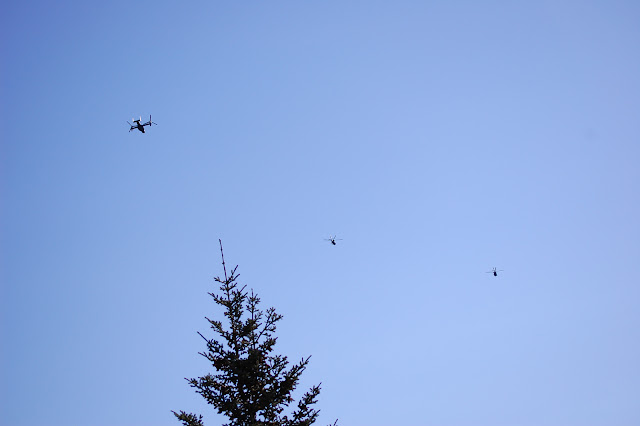 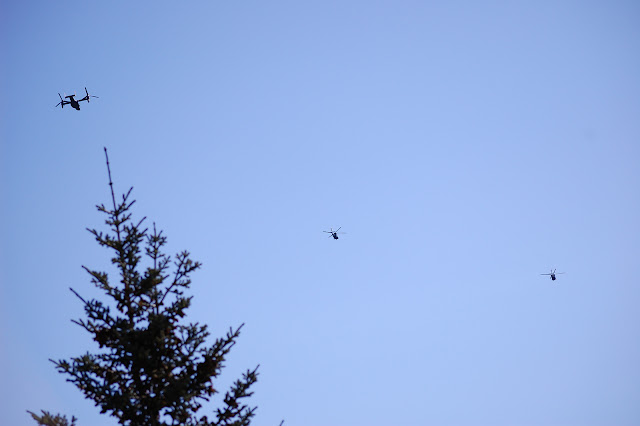 The only thing cooler would be if they really had landed and I'd walked right over there invited them in.   Without getting shot, of course.