Hong Kong and Mongolia, A Report from the Field: The Good, the Bad, and the Worst of Money Matters

Hong Kong has a system I wish all of the United States would adopt.


Imagine having a card the size of a credit card. 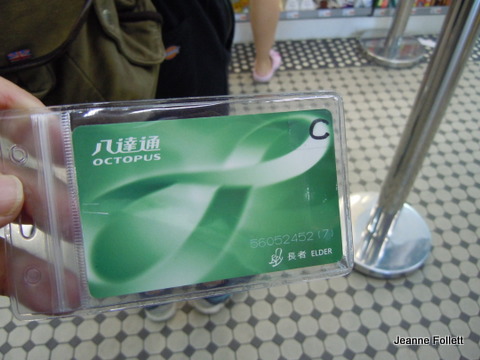 You land at Hong Kong airport and make your way  to the railway station.  You reach a turnstile and briefly touch that card to a screen.  The turnstile arm unlocks and through you go. That's it.  Your train fare is paid.

You get on a trolley through the rear door.   When the bus reaches your stop, you exit by the front door, briefly touching that card to a screen.   That's it.   Tram fare is paid.

You stop at McDonald's for a snack.  When the person who is taking your order indicates, you briefly touch that card to a screen.   That's it.   Your snack is paid. 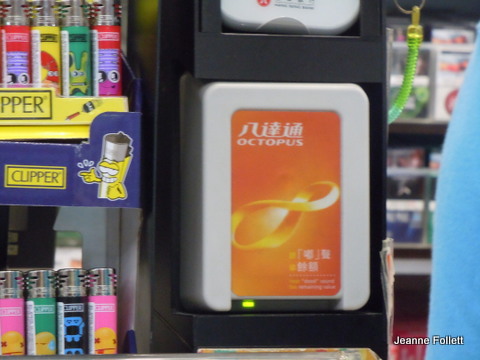 After your snack, you stop by a grocery and pick up a few things.   After the clerk rings up the total, touch the card briefly to the screen and you're on your way.   That's it.   The groceries are paid. 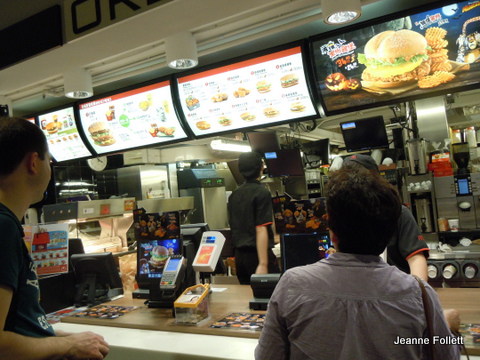 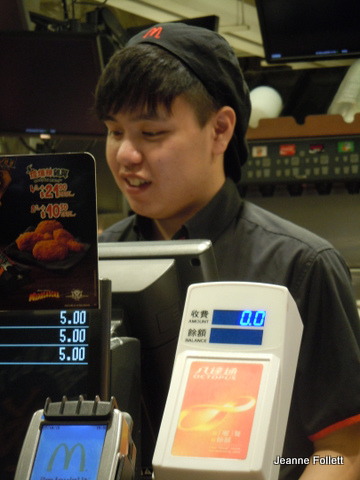 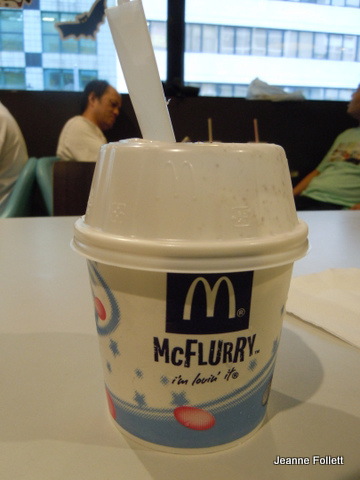 That card is called an Octopus card.   You put as much money on it as you want and when that amount is almost used up, you simply add more.

It is accepted almost everywhere in Hong Kong, though a few restaurants and shops don't.   They want cash.  No waiting for a computer to approve your credit card,  no signing a silly little machine with your signature totally unrecognizable.   And, in some cases, you pay less than with cash.

Slap and dash, as it were.  No lines, no fuss, multi-purpose.   No cooling your increasingly hot heels while a machine declines the credit card of the guy in front of you.   I know some cities have bus cards, subway cards, etc.   But can you use them to buy groceries?   Uh-uh.   One use and one use only.

Use the Octopus card to ride to the top of Victoria Hill on the tram.   Use it on a Star Ferry ride.   Use it at a grocery store, a flower shop, and multiple other places.  And a perk:   when you use it at most places, the sensor tells your your balance.   And another perk:  there's often a discount for seniors.

Afraid of losing it or having it stolen?   Don't put much money on it.  It's easily rechargeable in many locations.


And then there's Mongolia.

If I stayed here six months I still would not understand the money situation here.  The highest denomination bill here is the $20,000 tögrög or tugrik, or tug for short.  It's symbol is ₮.   The lowest denomination is the ten tug note.

Coins are no longer used and therein lies one of the problems.  No one likes to carry coins right?  Swell, let's issue paper notes instead of minting coins. 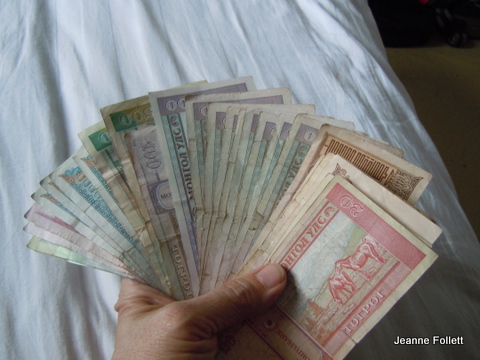 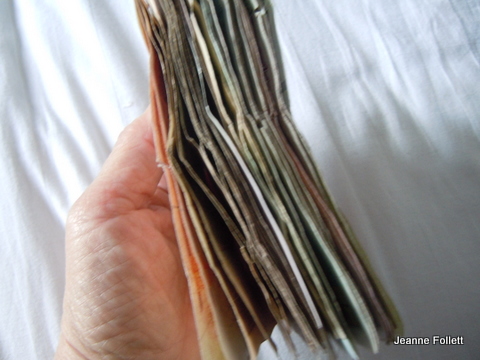 Slip  that in your wallet, sit on it, and you'll have a permanent list to port.


This wad that would make Daddy Warbucks ecstatic is worth just about $200 USD. 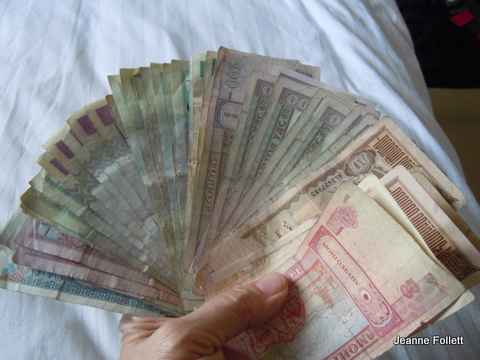 There is no way of hiding that on your body in such a way that it is indetectable to the pickpockets in any place on earth.   There will be a suspicious bulge in that place.   One person I know keeps money in a small ziploc bag stuffed between two pairs of socks on the inside of his ankle.   His wallet, similarly protected in a plastic bag, goes on the other ankle.   If I tried that, I'd be tripping myself every step or so.

The notes are pretty enough, by US standards that is.   Our uninteresting money notes can't compare to South African rands for beauty, and the Mongolian money notes have interesting historic scenes.


There is one other thing about tugriks that baffles me no end.    I try to be careful about showing a wad of money when I'm in a public place.  The tugrik makes that almost impossible.   For those of us who are not used to the tug, and what color each denomination is, the Arabic numerals for the denominations are almost hiding in the filigree.

Go back to the 5000 tug note above.   Look to the right upper corner where we Americans look to note the amount.   I don't know what that is.

So, I'm standing at the check out counter with my hope-to-be purchases and I'm flipping through this giant wad of money trying to find Arabic numerals.

Once in a while I get lucky.   Yesterday, I picked up a large bottle of water, went to the cashier, flipped out 1,000 tug note for the 950 tug price, got my 50 tug note as change, and sailed out the door like I knew what I was doing.

Nope.   She wanted another 5,000 tugs.   Then she handed me back a fistful of notes.  I've stared at the receipt several times trying to figure out if there's a hidden tax or something.  I can only surmise that I gave her 500 tugs rather than 5000.

I swear, even if I stayed here six months I would never be able to think in that many zeros.