Mongolia, A Report from the Field: A Khaan by any other Name is Still a Khan

“They called us barbarians,” my guide Yusef says, in a way that suggests he is offended by the invective.

“When I think of the Mongols,” I reply, “I think of fearsome warriors, not barbarians.” 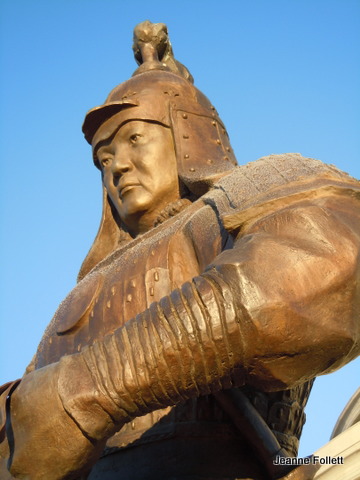 Remember Genghis Khan, that innovative (or barbaric, take your pick) Mongol ruler whose armies conquered much of Asia, southern Russia, the Middle East, and took a big bite out of Europe?
Turns out that wasn’t his name.

His name was Temujin.  When his father, the ruler of a clan of Mongols was killed, Temujin was only 12, and the clansmen rejected the boy as their new leader, abandoning him and his family to die in a semi-desert area.

Temujin fooled them all by not dying and by 20 was ruler of the clan.  His power increased over the years as success followed success in warfare and at age 44 the Mongolian council (kuriltai) formally acknowledged Tumujin as the leader of all Mongols and the conquered countries.

It was then that Temujin took the honorific Chinggis, westernized as Genghis.

Today, it seems, everything is named after Chinggis Khan.   No matter where you look, that name pops up.  The airport, stores, restaurants, everywhere, and there is talk of instituting laws regarding use of the name to prevent trivialization.   They might be too late. 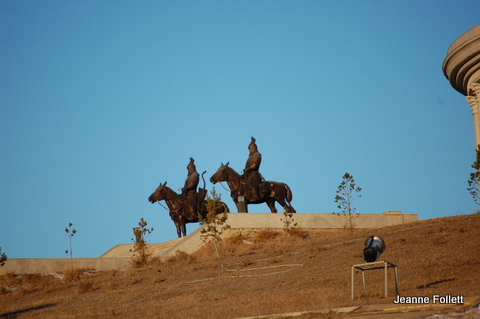 Though considered brutal by many historians, particularly by those in conquered countries, he is also noted for his religious tolerance, military system of meritocracy, enlarging trade between Christian Europe, Muslim Southeast Asia, and China, and allowing the Silk Road to flourish.   Mongolians consider him the founder of Mongolia.  The Mongols also set up a system of communication that rivaled the Pony Express, with horse stations every 50 km.   It, however, spread from Mongolia to eastern Europe, into Russia, and across the Middle East, wherever the Mongol armies were.

So, out of UB on the first day of my tour with Yusef and Aigii, where did we go for supper and to spend the night?   Why, the great statue Chinggis Khan, of course. 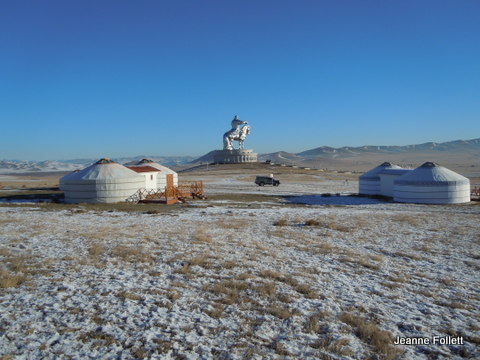 The statue of Chinggis Khan on horseback is to Mongolia as the Eifel Tower is the France, the Statue of Liberty is to the U.S., the Great Wall is to China, and the Taj Mahal is to India.   Located an hour and a half drive out of UB (33 miles), if there aren’t too many cows on the road, your first glimpse of the statue is the topmost part showing over a hill.   Soon the entire 131 foot high structure comes into view. 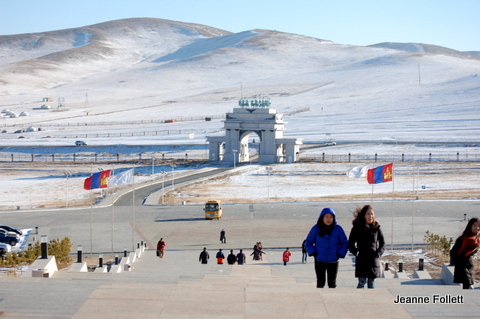 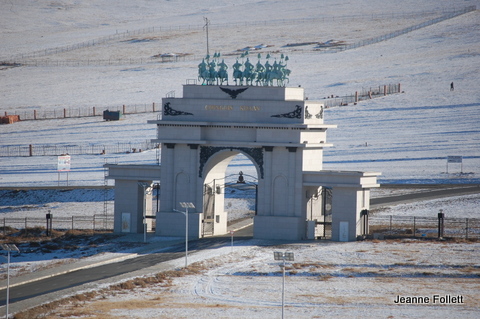 Finished in 2008 and erected in sections, the statue is made of 250 tons of stainless steel.  An internal support system with an elevators and many stairs allows visitors to go as high as the horse’s neck, then exit there onto a viewing platform on top of the horse’s head. 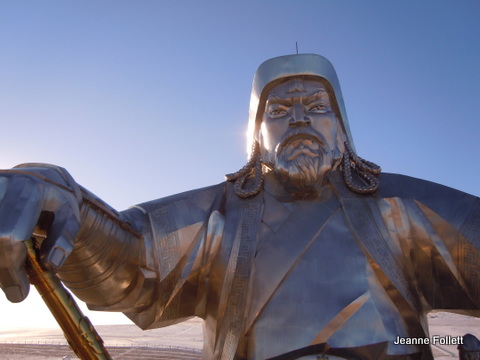 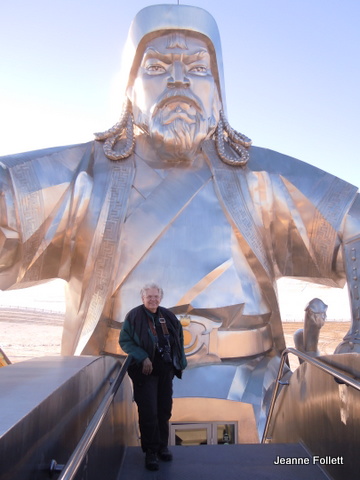 The base of the statue has 36 columns, representing the 36 khans from Chinggis to Ligdan Khan (1588-1634).  It faces east, towards Chinggis Khan’s birthplace.  In a lower floor is an impressive museum of Mongolia bronze age artifacts.   No photos allowed.


Now operated by Genco Travel, the company with which I traveled, future development calls for construction of a total of 200 gers arranged in the shape of the horse brands used by 13th century Mongolian tribes. The Statue of Chinggis Khan, different views and differing lighting, plus interior.
\ 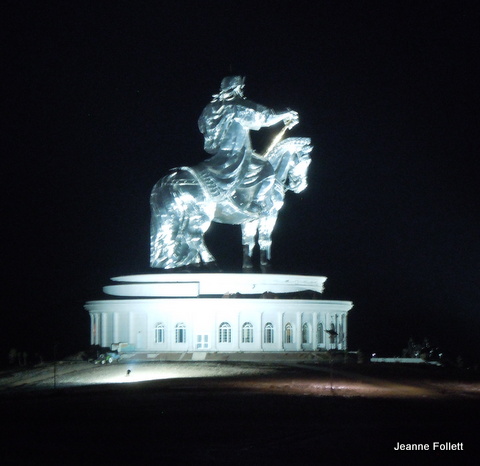 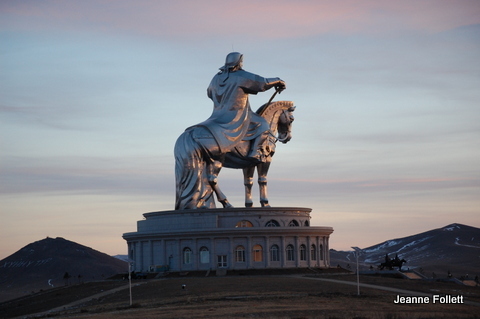 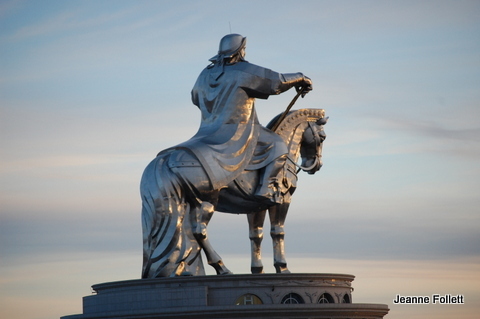 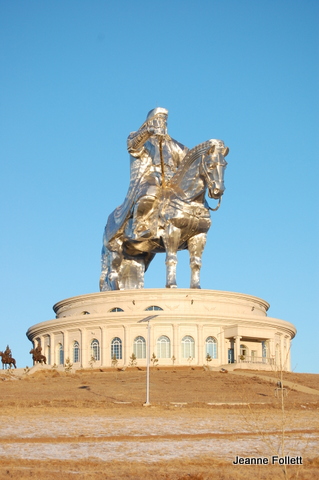 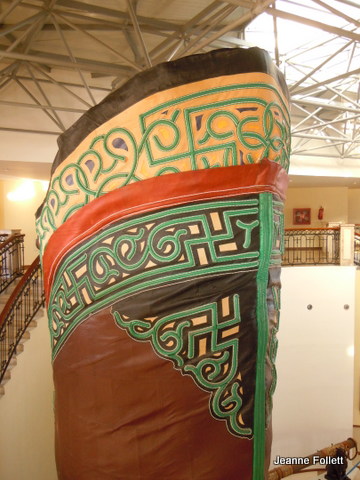 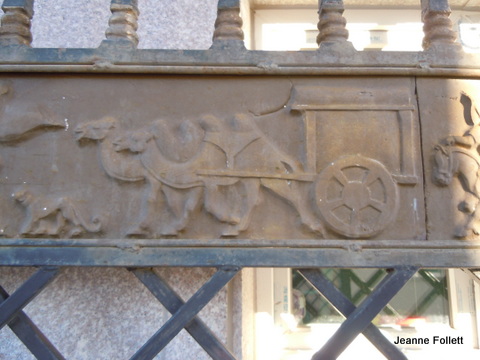 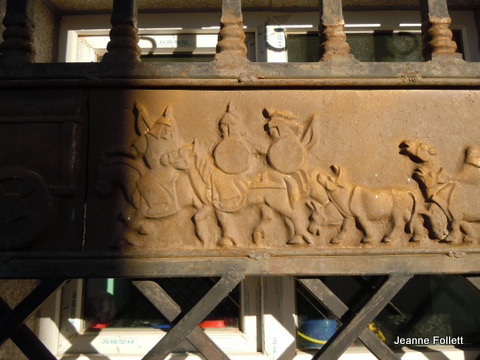 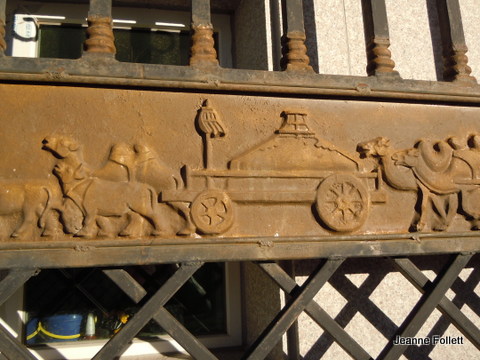 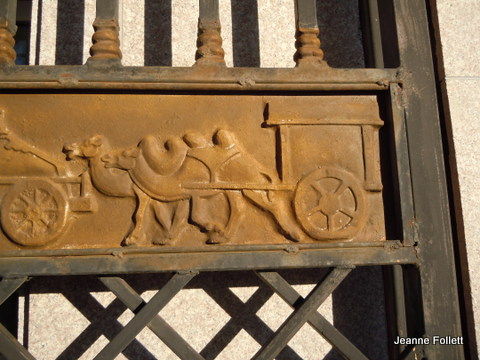 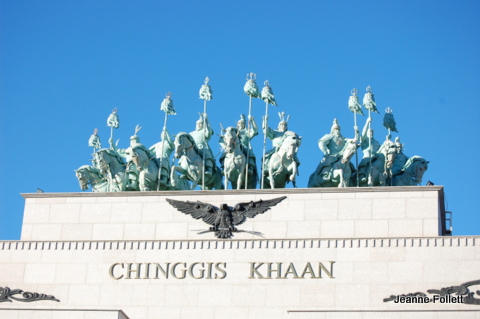 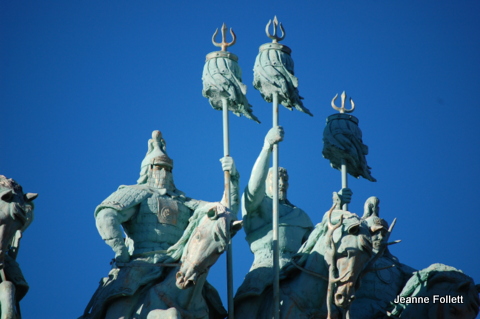 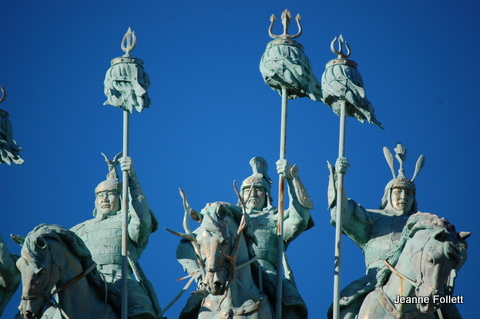 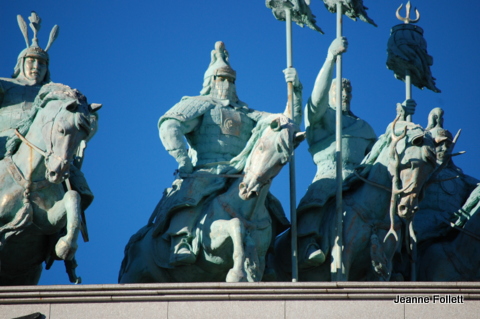