Mongolia, A Report from the Field: Mongolia's Time Machine, Part One

(This first part is a long one.  I had a tough time trying to decide how to present this part of my journey without it sounding like a traveloge, but after inspiration hit, it was non-stop.  I was having so much fun writing, the word count was close to 1500 words, and I wasn't near being finished, so I divided it into a few parts. Pay attention; there might be a quiz later.)

Let’s face it:   Mongolia’s golden years were during the 13th century when Chinggis Khan (aka Genghis Khan) sent out his hordes to conquer the world and they darn near did it, at least much of the known world.

The sturdy Mongols on their sturdy Mongolian horses slashed and pillaged their way across Eastern and Central Asia, including vast tracts of China and Russian Siberia, south to India and Tibet, ran rampant across the Middle East to avenge the murders of  Mongol envoys, and devastated Poland and Hungary. 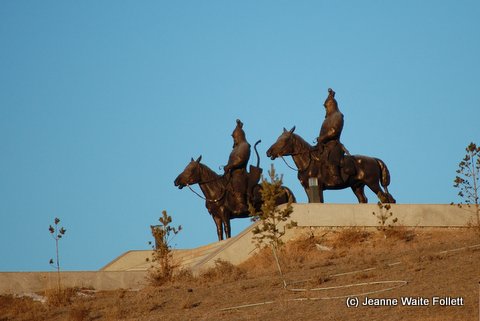 They stormed through Transyvania, scaring the bejeebers out of the populace in a way that Vlad the Impaler and Dracula never could.    They raided Lithuania.

They were on Vienna's doorstep when the unexpected happened. 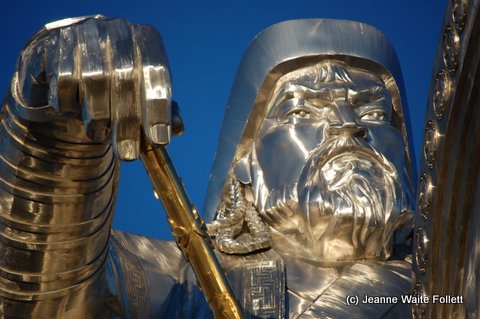 Riders from the exceptionally rapid and reliable Mongol pony express delivered messages to all the far-flung Princes of the Realm that the great Chinggis Khan had died.   Being good Mongol democrats, the Princes returned to Mongolia to vote for a new Khan.   As siblings will do, the Khan’s sons began squabbling over their inheritance, and the Mongols’ grip on the conquered lands began to slip while the brothers fought each other. 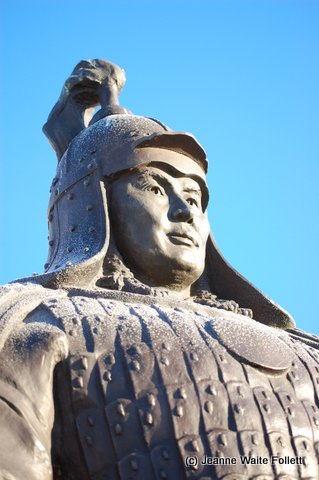 Mongolia found it almost impossible to govern such remote territories. The conquered armies soon realized that the Mongols were not infallible, and started taking back their former lands. 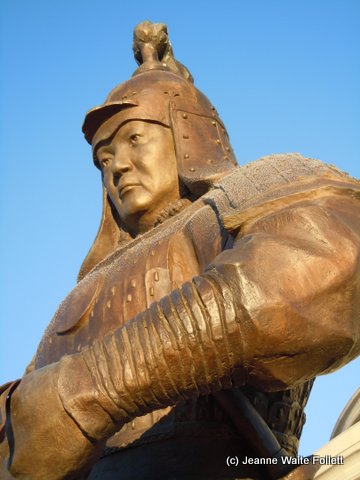 After that, everyone kicked the Mongols around and over the next few centuries the vast Mongolian Steppes were ruled by the Chinese, the Russians, the Soviets, and various other wannabee conquerors.   Even the Imperial Japanese Army had a go at Eastern Mongolia during WWII, but Stalin and the Russian army slammed that door.

Then the Soviets built a nice memorial, in honor of themselves and the Russian soldiers who died during the war, right in Ulaanbaatar, the capital city of Mongolia, which they had renamed.  Translated, Ulaanbaatar means "Red Hero."

In retrospect, it’s a good thing for Austrian tourism that the Mongols did not take Vienna.   Can you imagine those stocky little Mongolian horses trying to do classical dressage movements like the Capriole, instead of those magnificent white Lipizzaner stallions?  Come on, the Mongolian Riding School in the exquisite Hofburg Palace arena?  Mongolian horses are rightfully famous for their durability, strength, and stamina, but not for Haute Ecole.

No offense intended to the renowned Mongolian horse, but, you see what I mean.

Which brings me to the point of this story:  Tourism.  Mongolian tourism in particular.  It’s a fledgling and likely to stay that way for the foreseeable future as the country continues to find its way out of the repressive years of the Soviet era.  Right now, the Mongolian government is more occupied with the mineral wealth deep under Mongolia than tourist dollars, or tourist tugruks.

Add to that, Mongolia succeeded in having itself declared a nuclear-free country and is now aiming for recognized status as a neutral state, like Switzerland.   It also walks a fine line between Russia and China, with each coveting its various mineral mines, substantial uranium deposits, and everything else.

All of which means that it's a wonderful time to visit the country, before tourist gers overrun the place.

So, what are the numerous companies offering various tours in Mongolia to do?   For masochists, there are camel caravans in the blistering 122 degree Gobi desert, or dog sled trip at minus 50 degrees Fahrenheit in northern Mongolia.  There’s the Gold Eagle Festival in October in western Mongolia where Kazakh hunters pit their eagle’s skills against others.

Plus, my personal bucket-list favorite—an expensive, arduous, by-permission-only horse trek into the northern Mongolia taiga to visit and stay with nomadic reindeer people, the slowly-diminishing Dukah (or Tsaatan) tribe.

I can only wish the next three photographs were mine.   They are the work of  Hamid Sardar Afkhami.

But beware of this culturally sensitive excursion.   One woman, a well-educated woman, became the objet de l’amour of a Dukah shaman, who put a spell on her to make her fall in love with him, with the result that she now lives happily as the shaman’s wife and herds reindeer.

Mongolia is one big outdoor recreation area for those who love the outdoors.   Hiking, trekking, river-rafting, mountain climbing, horse back riding, bicycling, it’s all available in the wide open spaces that you love.   And more, for whatever sport you choose to inflict upon yourself.

For others, Genco Travel company has another answer.  Go back to the golden years, the 13th century, all in the comfort of your air conditioned automobile (four-wheel drive recommended) and just off the main highway a few miles on a road of sorts.

Called the 13th Century complex (or theme park or living museum), the site is a re-creation of a typical Mongolian camp in the—what else?—13th century, except for the solar panels, satellite TV dishes, and CFL light bulbs in the gers, and the occasional herder on a motor bike.   Spread out over 88 hectares in spectacularly scenic hills and rock formations, the complex features six sites, each depicting different aspects of Monglian life. 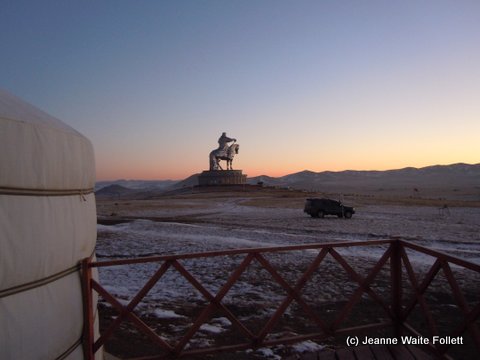 On another clear and crisp morning, I’m up early to photograph the Chinggis Khan statue in the early morning light.  As luck and astronomy would have it, the moon is visible over the Khan as the sun comes up behind me. 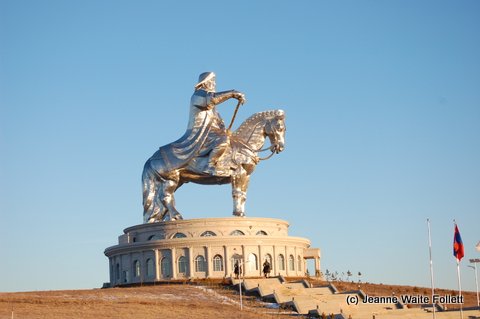 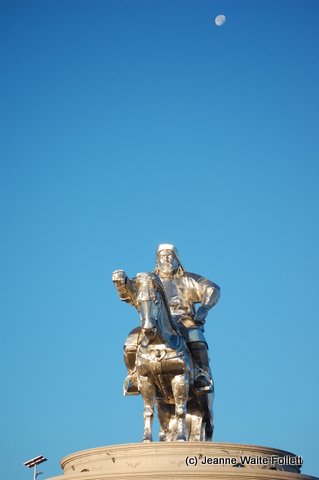 When Yusef and Aagii are ready, we go to the statue dining room for breakfast.   This morning, I’m treated to a green salad with oil and vinegar dressing and a bowl of flour soup, called bantan, or  Бантан for you linguistic purists. 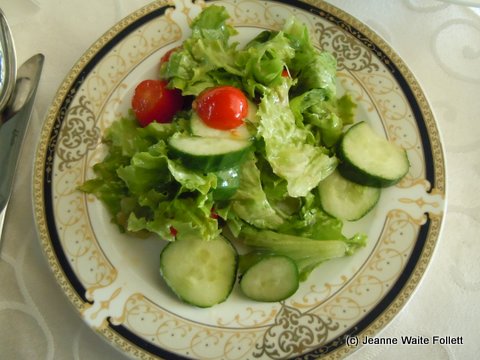 It’s actually quite tasty with ground lamb in thickened milk and rice-sized bits of flour “dumplings” thickening the milk, somewhat like gravy turns out when you aren’t careful about mixing the flour with hot pan drippings, or go with the milk-and-flour-in-a-jar bit.

Yusef assures me this is a Monglian favorite.   Often their first solid food, children love it and it’s really good for hangovers, he says. Its consistency is accomplished by adding some of the soup broth to a bowl of flour, then mixing it all until the flour congeals into rice-sized bits and adding that back to the main portion of soup.   Or, you can just pretend you’re making gravy and get the same result.

Yusef, the vegetarian, has a glorious plate with fried eggs, salad, and pieces of a pita-like bread.

We finish our milk tea and we’re ready to go back through the centuries.

For more photos of the reindeer people:

people-dukha-mongolia-hamid-sardar-afkhami/
Posted by Gullible at 5:15 AM