Mongolia, A Report from the Field: Off to See the Turtle

There was a lot of yammering and symbolical wringing of hands before I left Alaska for Mongolia, to arrange a guided tour of the things I really wanted to experience in Mongolia.   Cap, with a great deal of assistance from his friend Deegi, pulled it off.

In essence, I hit the tarmac at Chinggis Khan airport in Ulaanbaatar running and I didn't take a breather for a week.

After landing, suffering the suffocating traffic of evening rush hour in Ulaanbaater, and getting a decent night's sleep at the Sunshine Hotel, I was up bright and early, ready to check out of the hotel, lug my luggage over to Cap and Patti's apartment across the alley, and head into the wilds with a Mongolian guide and driver. 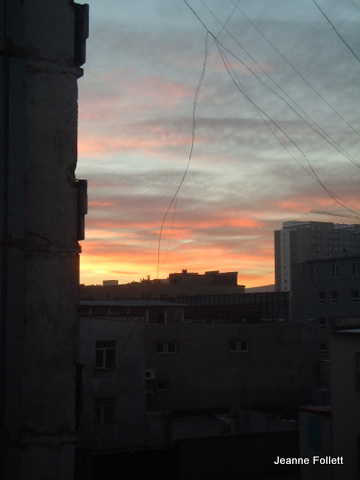 Just as Cap arrived at my room to help with the luggage, a hotel employee arrived with two plates of breakfast.  I'd already made some oatmeal and downed that, so the scrambled eggs, hot dogs, and dark bread went to Cap and Patti for breakfast, smuggled out of the hotel in a large plastic bag, with the empty plates smuggled back in the same way. 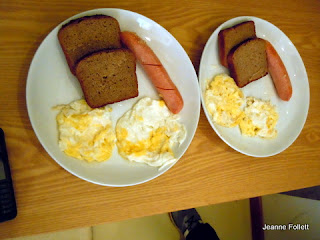 Then a dark green Toyota Land Cruiser pulled up in front of the hotel and an English-speaking young man named Yusef came to get me.  He introduced me to the driver, Khurelbaatar.  Thankfully, he had a nickname, Aagii, pronounced Ah-GEE.


We drove east into the rising sun to Terelj National Park. 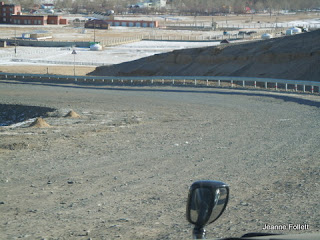 The pavement ended at the curve in the above photo.   It will never be paved, explained Yusef, because the road would be too slippery.   When I asked what the mounds of dirt were (two are at center left), he said they were filling holes in the asphalt.   I think they are also for spreading on the icy road for traction as I saw many of them on paved hills. The park is set in a mountain valley and the small amount of snow evoked visions of colorful Austrian or Swiss villages, except Terelj is dotted with the round white dwellings called gers, similar to yurts.  Gers are the traditional homes of Mongolian nomads and are still in use today as residences. 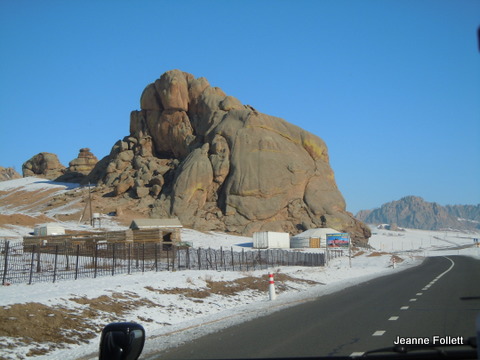 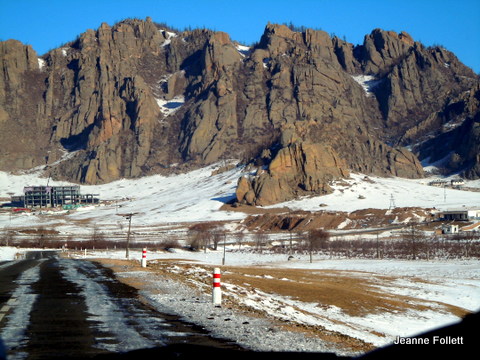 First stop, Turtle Rock, so called because its form looks something like a turtle. 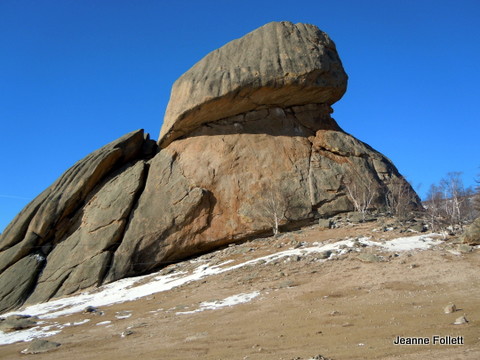 "Do you want to climb?," asked Yusef.   I looked at the rock, thinking there was no freaking way I could climb up that smooth rock. 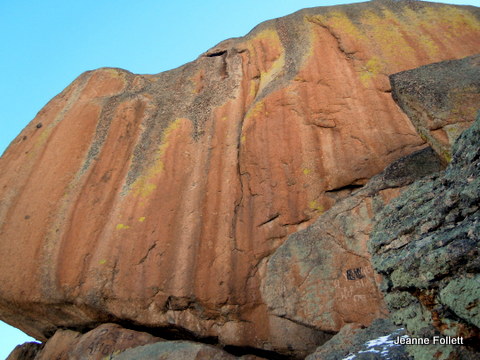 "On the back side," said Yusef.  "You can climb to the turtle's neck."

And so we did.

There was much slipping and sliding on the frozen-melted-frozen snow and pebbles up to a slot between the turtle's body and head.   *


We squeezed through with the sunlight squeezing through from the opposite side to illuminate a kind of chamber, with something like a cairn where people leave offerings to the spirit of the mountains. 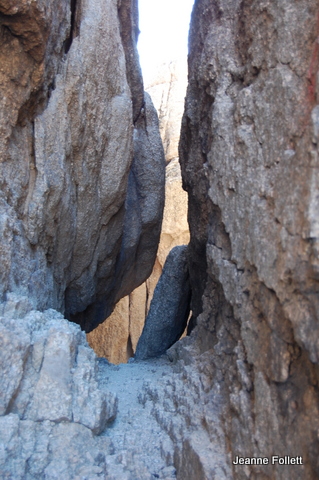 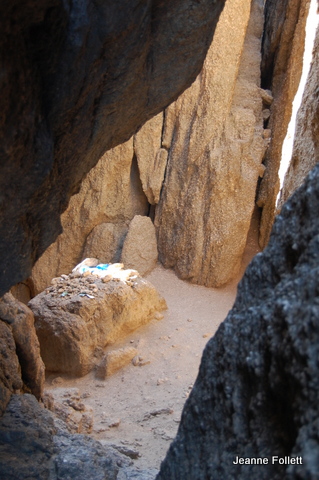 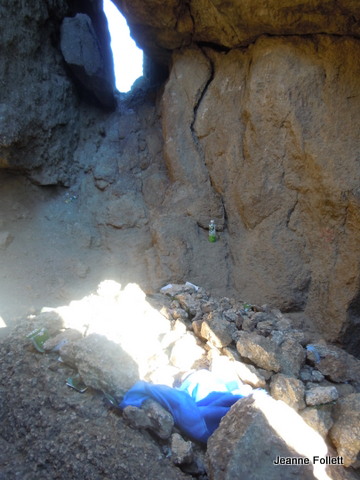 I added my 50 cents (1000 tug) and we slipped and slid our way down and back to the Land Cruiser.


And,on the way down, you known what I did: 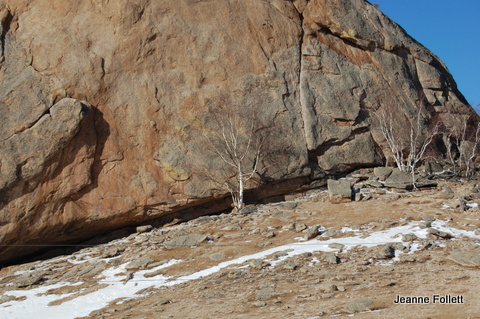 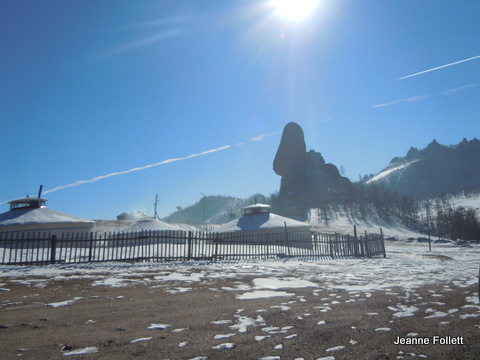 Note the rocks balanced on top of these peaks around Turtle Rock.   Mongolians call them "the lamas." 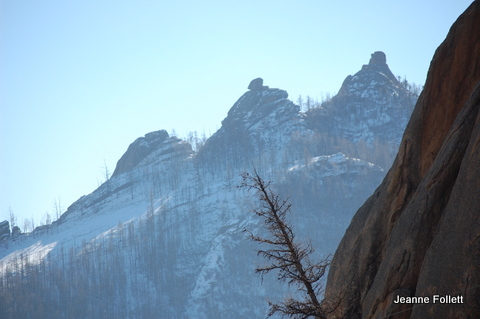 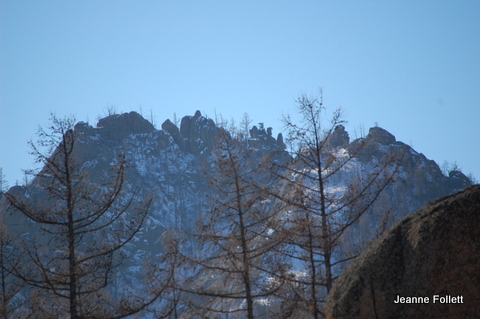 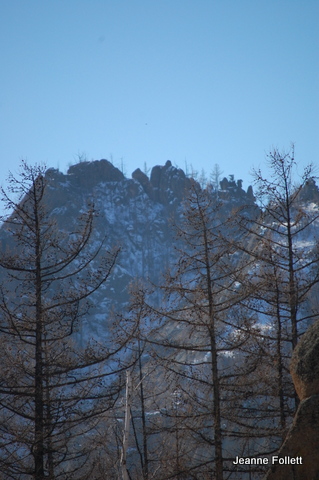 There is almost no commercial development in the  park outside of this valley.   For that reason, it is a favorite spot for hikers and climbers.

* Cap and Patti made the trip to Turtle Rock a couple days after I did.   They did not climb it, as I had done.  "It's very difficult," their guide told them, the same guide that climbed it with me.  "Did you think about what would happen if you broke your leg up there?" Cap asked me.   "Or how long it would take to get help?"

The only answer I had, the one I did not voice, was "If it happens, it happens.  At least I am not at home sitting on my couch."  This has been my mantra for ten years as I get all I can out of life and make up for the years I was too timid and/or shy to try new things.