Hong Kong, A Report from the Field: Mass Transit

Hong Kong has a truly impressive mass transit system.  With a population density of 6300 people in a square kilometer (very, very roughly a third of a square mile), the city would come to gridlock if it hadn't one of the most organized and efficient systems of moving people in the world.

Hong Kong now belongs to China, if you recall.   The British gave back the Crown colony in 1997, much to the dismay of Hong Kong-ers.   Now it is a Special Administrative region of China, with China interfering and the people of Hong Kong staging protests on a fairly regular basis.

But, back to mass transit.

There are, of course, privately owned vehicles and there are taxis. 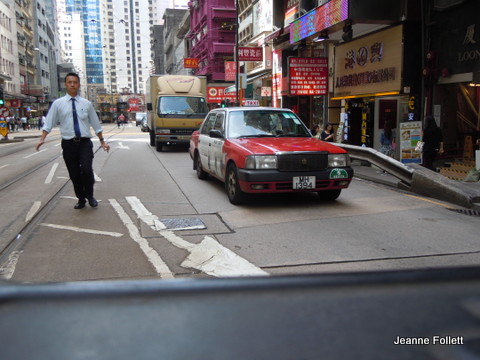 There are trolleys, or as they are called here, trams.  They run on tracks and are electrically powered. 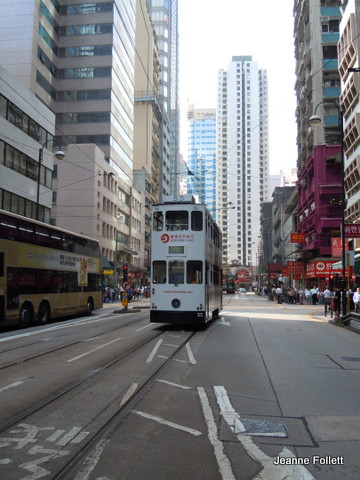 They are everywhere.   And there are buses.


There are the wonderful Star Ferries that transport people back and forth across Victoria Harbour. 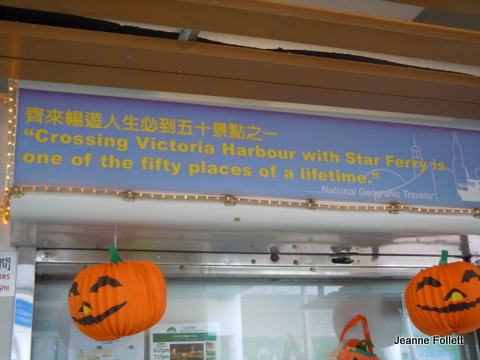 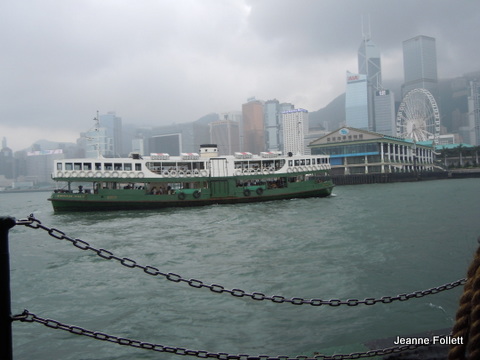 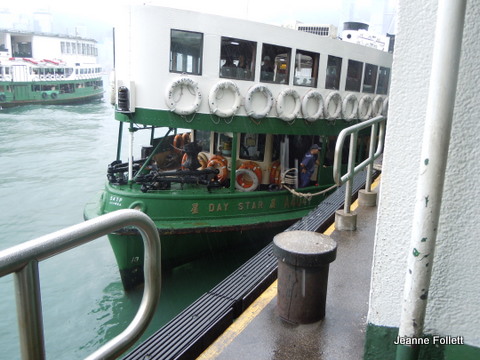 As well as other, faster ferries.... 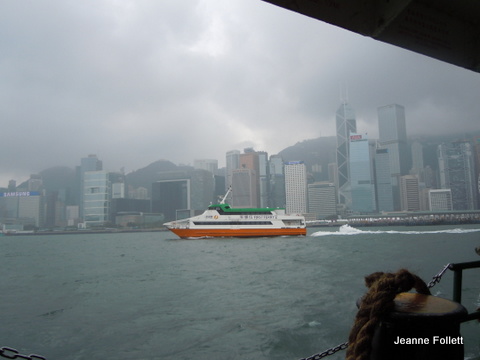 Much of the ground transportation is free for seniors, or at a reduced fare.


And then, there's the MTR, the Metropolitan Transit Railway, one of the most profitable railways in the world.  Since the MTR opened in 1997, the railway now has 135 miles of rail with 155 stations.

Prior to 1998, the airport at Hong Kong was Kai Tak on the Kowloon side of Victoria Harbour, close to the city's skyscrapers and mountains and extremely technically challenging to pilots.  The History Channel rated it as the 6th most dangerous airport in the world,not only because of its proximity to the tall buildings and other immovable objects, but because the runway jutted into the harbour.

From Wikimedia:  At the northern end of the runway, buildings rose up to six stories just across the road. The other three sides of the runway were surrounded by Victoria Harbour. The low altitude manoeuvre required to line up with the runway was so spectacular that some passengers claimed to have glimpsed the flickering of televisions through apartment windows along the final approach.


Then a new airport opened 19 miles from the city and fliers relaxed as much as fliers can relax.  I suspect the pilots relaxed a bit, too.

The MTR now carries many people back and forth, which is how three of us got from and back to the new Chek Lap Kok airport, or Hong Kong Airport.

I'd show you photos of the MTR if I could, but because I was inside a rail car, I can't.

Here's how we got back to the airport from Kowloon for our flight to Mongolia:


First, a free shuttle bus took us from a stop near our hotel in Kowloon to the MTR station. 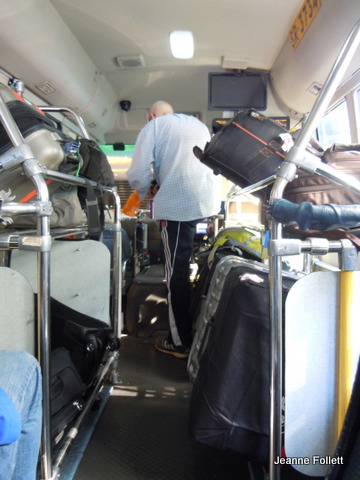 Inside a large spotless terminal, we located the sign for our airlines, MIAT or Mongolian Civil Air Transport.  Remember, this is still the train station.

We checked in at the ticket counter, just as if we were at the airport, but without all the hassle and long lines. 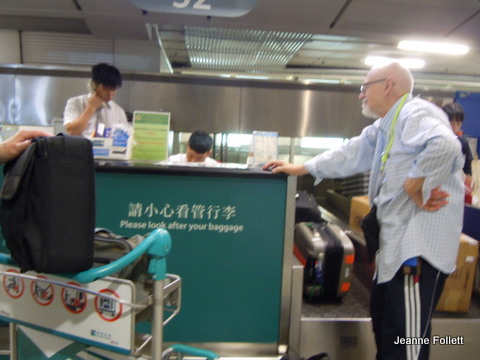 That's Cap at the counter and my unmistakable orange-striped suitcase on the baggage belt.   Yes!   You get rid of your checked baggage at the MTR station! 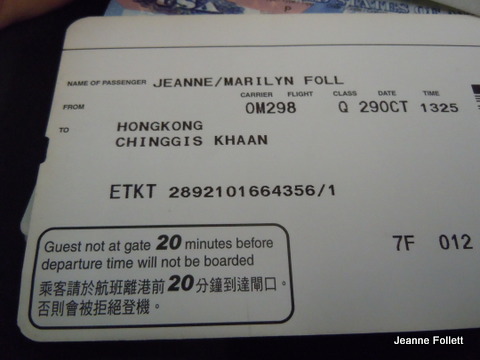 Then, to the train platform. 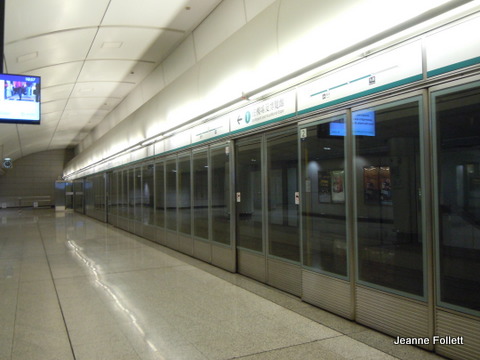 No one is going to fall or get bumped off the platform like on some US subway systems.   The train arrives,stops at EXACTLY the right spot, the glass doors open, and you board.   Then, choose your seat for the 25 minute ride.   Because we were at the end of the line, the car was empty. 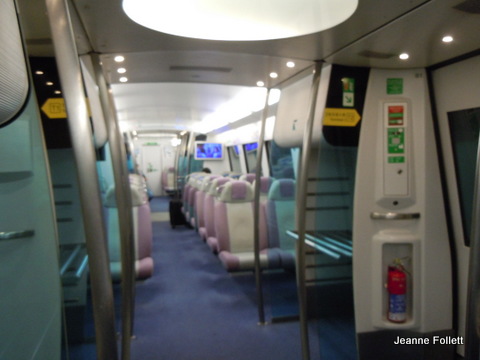 A crowded shuttle bus takes you to the satellite building where your gate is located.   (An aside:   I once landed in Los Angeles and thought we were going to taxi to San Francisco.) 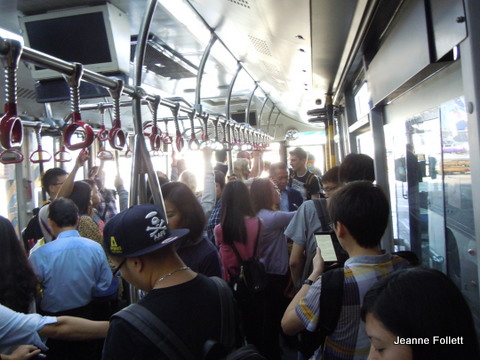 Past docked airplanes with some pretty cool paint jobs.... 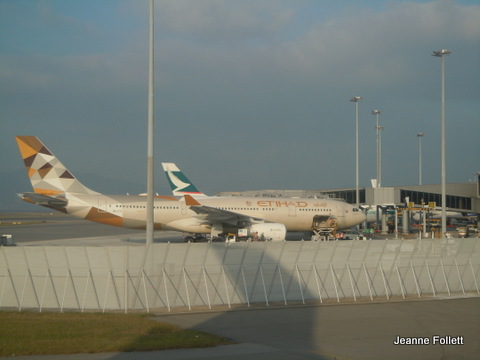 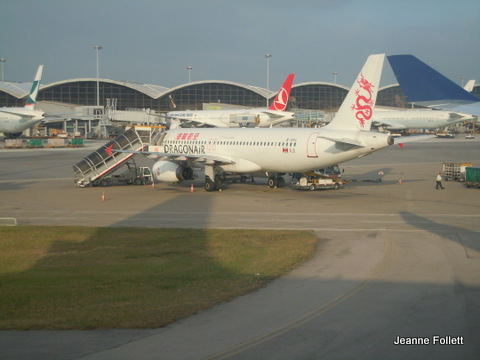 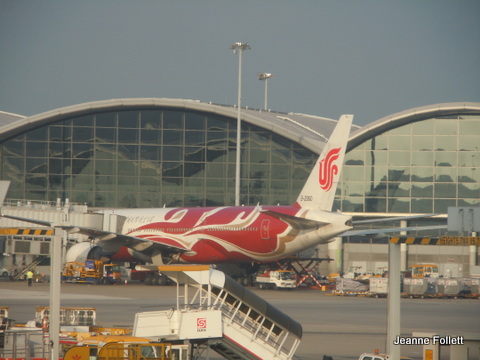 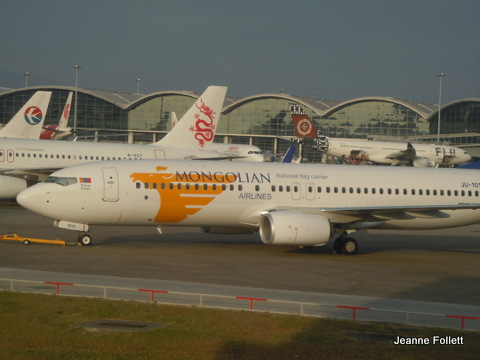 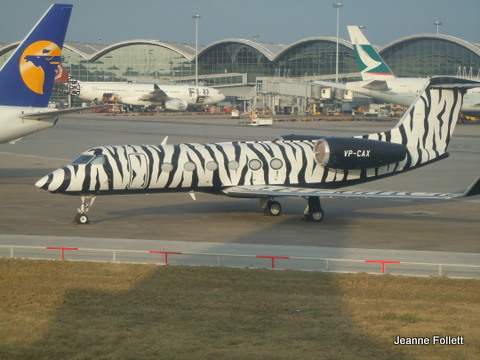 Then. more long walks through duty free and regular shops, along long concourses, and finally... 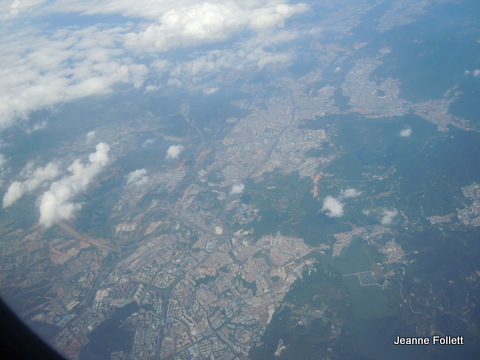 ...on the flying horses of MIAT. 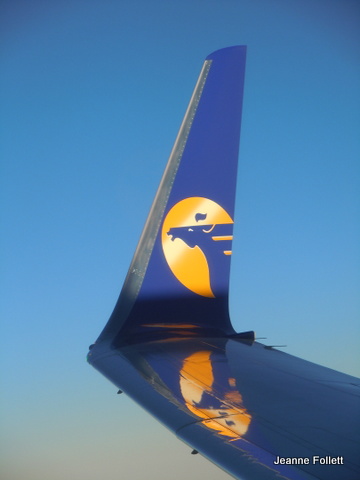