a quick tour of Seward, Alaska

I made an unnecessary trip to Seward this afternoon, which is 36 miles south of where I live in Moose Pass. I'm not going to tell you why I went to Seward, and was careful to be there at exactly 2 p.m. Suffice it to say that I have to be in the same spot at 2 p.m. TOMORROW.

Anyway, I decided to drive around and take a few pictures. The sun was already behind the ridge of mountains, and I haven't yet figured out how to adjust the exposure on this little digital camera, so all these pixs will seem dark. This first one is a shot of Resurrection Bay. Notice the spray blowing off the white caps. In the foreground, that dark brown log-looking thing is a sea otter.

If you click on these pictures, they will enlarge to full-screen, which can be a scary thing when you get to the one of the crows... 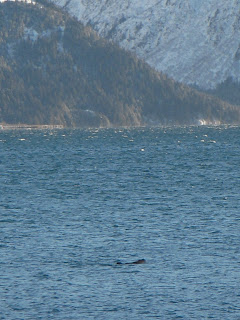 This is a coal ship in port, ready to take on a load of coal that comes from the Usibelli mine quite a ways north of Anchorage. It's transported to Seward in special rail cars, unloaded at a coal handling facility, then loaded on the ships for transport to Korea. A story in the newspaper recently said the city has shut down coal loading until weather conditions improve. It's been too cold for the glycol solution they spray on the coal to keep it damp and hold down the coal dust. When the wind blows, that dust will settle all over town.

The ramp thing is a conveyor system that brings the coal from a holding area and drops in into the ship's hold. 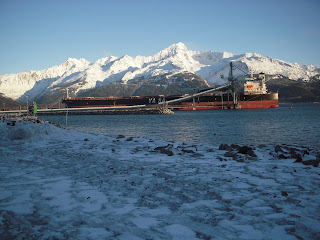 As soon as I parked to take a photo of the ship, Seward's ubiquitous crows came looking for a handout. I had a half dozen granola bars in the truck, and shared them all with the crows. 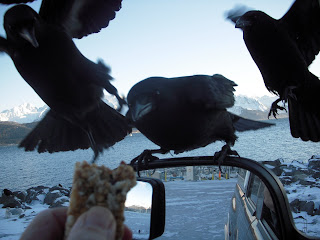 This is not a very good picture of Seward's main street. 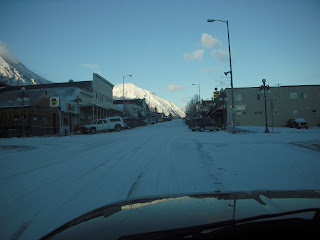 One of the several murals on bldgs. around Seward. 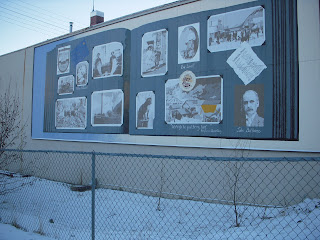 This is one of Seward's older buildings. 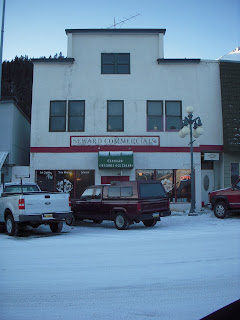 This beauty is the carved wooden door of Yoly's Bistro. 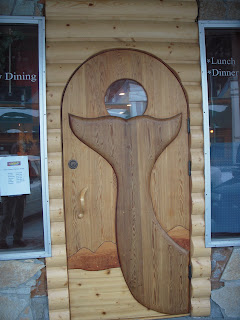 This is the Ballaine House, one of the historic homes in Seward. It is the centerpiece of a row of homes built on Millionaire's Row. 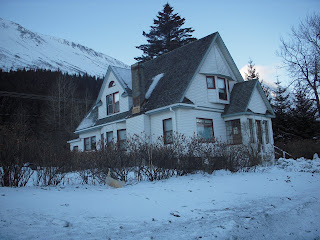 Seward also has its share of more eclectic residences. This one is a quonset hut. My first home in Alaska was a quonset hut, but that was in Anchorage in 1948. 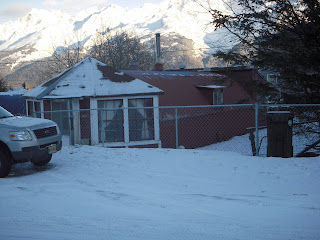 And these, on the ridge above the Seward Lagoon, are mansions overlooking Resurrection Bay. 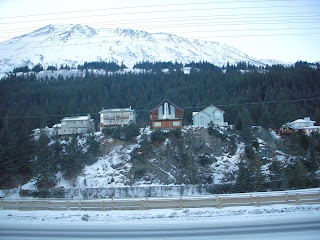 These are some waterfront condos. They have a name, but I can't remember what it is because I call them the Breakaway Condos. Right after they were completed, in the mid-80s, a fall storm over-loaded a creek running through this area. The creek jumped its banks and washed out the foundation of the condo unit that used to be at the far left of this row. Then the unit broke away from the rest. 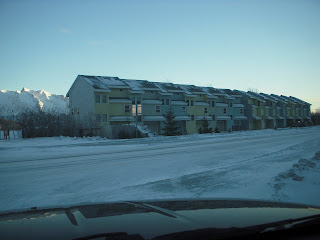 This is the unit that detached from its siblings. It got moved down the road a ways and turned in a club house for the yacht club. 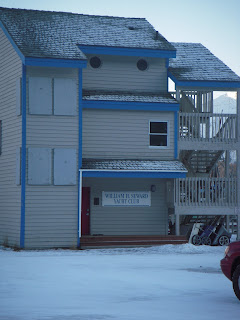 How's this for a waterfront hotel? It's the new Holiday Inn Express. That's ice there down below it, in a protected part of the small boat harbor. 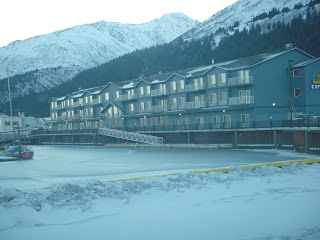 Here's another view of the coal ship and the loading facility. That thing that looks like a pipe running on top of the breakwater is a covered conveyor. 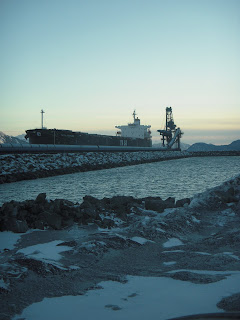