Beth and her husband, with Maggie the Labrador retriever close by, walk through their home, putting it to sleep for the night as they make their way to the bedroom to put themselves to sleep.

They turn off lights, unplug strings of miniature lights on the three artificial Christmas trees that continue to compliment their home late in January. The trees have been there since right after Thanksgiving. Beth writes, “They are as real to us as the Velveteen Rabbit.”

And that sentence, like much of the writing at her Switched at Birth blog, rekindles a memory in me. In the book The Velveteen Rabbit, which has become a classic children’s story, Margery Williams tells a tale of the power of love to transform a toy stuffed rabbit into a real rabbit.


“Have you ever read The Velveteen Rabbit?” asked my house guest. I replied that I had not, nor had I ever heard of it. He hesitated, obviously wanting to say more, but perhaps unsure of my reception. Then he said, “Things speak to me.”

I kept, I hope, a straight face. I’m not sure what surprised me more, hearing those words from an ex-Marine in his seventies or that I understood what he meant. This certainly was a road less traveled, so I decided at once that I would take this trek.

“I saw the box of crayons. The unopened ones. They’re sad because they aren’t being used. They don’t feel loved”

Oh, definitely a road less traveled. I wondered if there were even a path there. I didn’t know this gentleman very well. He was a longtime friend’s companion, and they were spending a few days at my home. I knew, though, that he was a very spiritual individual. The crayons of which he spoke were a collector’s tin box of sixty-four classic Crayolas, including rare and discontinued colors. The cellophane wrapper still enclosed the box, though I had accidentally torn it one day.

The unused crayons, he said, cried out to him for help. I forget much of what he said. I suppose I was stumbling along that lesser used road in the yellow wood that Robert Frost wrote about and didn’t have the brain power to retain everything he said. I really didn’t want to unwrap the box.

I keep serviceable crayons and coloring books in a desk drawer for the girls from across the road when they come to visit. They are fascinated with the crayon sharpener, which they feel obliged to use after a few strokes of the crayon. There is much more sharpening than coloring done during these visits. They always sit at the dining room table, near Pablo the Parrot’s cage, to do their coloring and sharpening. Pablo likes the brightly colored crayons, and keeps saying, “Hello? Hello? Hello?” That’s his way of asking for one, which he never gets.

But the others were a pristine set, a collector’s set, and I wanted to keep them that way.
When my friend and her companion left to go sight-seeing for a few hours, I took the cellophane off the Crayola box, opened its lid, and set a coloring book next to it. When they returned, the gentleman was very happy and assured me the crayons now felt loved.

Three months later, I unwrapped a birthday gift from those friends, a copy of The Velveteen Rabbit. I left their apartment, drove the hundred miles home, and read the story after I went to bed. I lay awake thinking for a long time. While I thought it a fanciful tale, with perhaps a subliminal message to children to take care of their toys, I also was very aware of my tendency toward anthropomorphism, the assigning of human feelings and characteristics to animals and sometimes inanimate objects.

The next morning, after donning my winter gear for the daily search in the snow for the morning paper, I opened the door and stepped out onto the covered walkway of my house. There, in the new snow that had drifted onto the concrete, were the oh-so-visible tracks of many snowshoe hares, as we call the long-eared rabbits in Alaska. Many, many hares, or at least one very busy hare. I had never seen them before on this part of my five acres, and certainly never on the walkway.

Now, every winter since, I see the tracks of long-eared velveteen hares that hop up my walkway to the door, veer to starboard to bypass the flower box, then continue on their journey under the large rear deck. And every time, I am reminded of the power of love and of how taking a road less traveled can sometimes make all the difference. 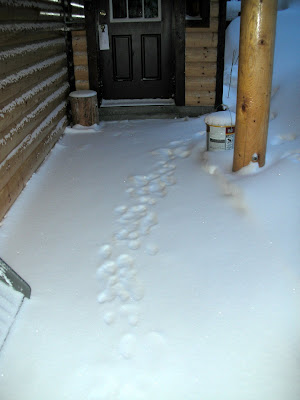 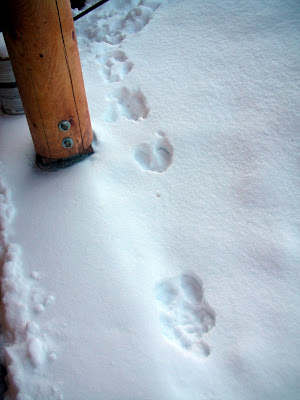 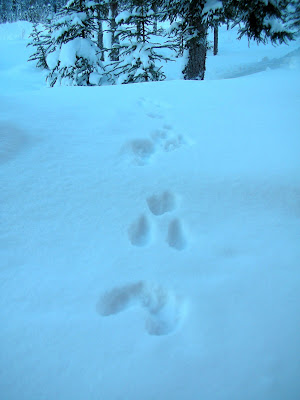