The Rest of the Story

Strange how information flows. Sometimes it comes at us directly; sometimes it takes the long way around and reaches us through channels we least expect. So it was with news of the death of Diana Tillion, 81, of Halibut Cove.

Diana slipped the bonds of earth Wednesday night. She died quietly at her home in the Cove, and was interred in the family mausoleum, not far from her beloved art studio on the Tillion grounds. Her presence will always be in the Cove she loved so much.

News escaped me Thursday and Friday. I think my newspapers for those days lie covered with new snow at the end of my driveway. I also missed the local news on TV. I learned of her death by wondering why there were so many “hits” for June 2009 on my blog. When I looked through the archives, I saw a new comment posted Feb. 5: “RIP Diana,” it read.

I have often written here of visiting in Halibut Cove, a small community across from Homer, . Thanks to friends who live there, friends who like to travel Outside during our winter months and who need someone to stay at their home to open the sliding glass doors for Gerri the cat so that she might go to and fro, I have a place to stay. During my times there, I became acquainted with the Tillions, Clem and Diana, the patriarch and matriarch of the Cove. I won’t go into their history here, because Googling their names will provide you much information.

Instead, I am re-posting a story I first wrote in June of 2009. Its title, “Fleeting Windows of Serendipity,” and the awe I felt at the experience I described, may have been lost on those of you who didn’t know all the circumstances at the time.

Diana died of cancer, a disease that was ravaging her body. But for several years, she also had been battling a more insidious disease, a thief that was robbing her of more than her body. As another resident of the Cove put it, “We’re losing Diana.”

This particular disease is often characterized by what are called “windows,” a flash of time during which the afflicted seem un-afflicted.. These windows can last for seconds, minutes, hours, or days, but like real windows that open, they also close.

With that information, or as Paul Harvey said, “the rest of the story,” you can reread “The Fleeting Windows of Serendipity” will a full understanding of how blessed I was the day I chanced to see gentle Diana and spend some oh-so-quality time with her.

Rest in peace, Diana. You have enriched my life in unfathomable measure.


I suppose certain events had to come into play before my latest adventure could occur. Perhaps the planets needed to align themselves just so, or the forces of humankind and the forces of nature had to mesh in a certain way, or lady luck had to smile on me at just the proper moment. 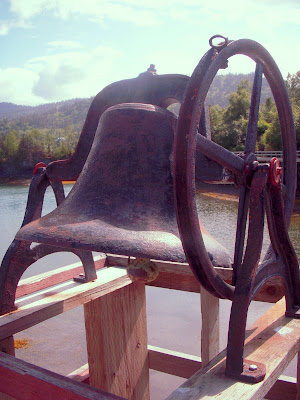 On the other hand, maybe the only thing that needed to happen was for a very special woman to need firewood at the same time I was walking by her home in Halibut Cove. Regardless, Serendipity, that goddess of winsome chance, opened a window and I was favored with the presence of Diana Tillion, the eighty-one year old matriarch of Halibut Cove. 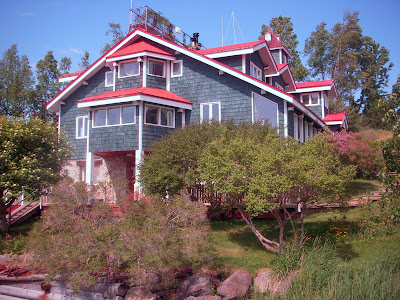 The Tillion home in Halibut Cove.

“Hello, Diana,” I called as I watched the small woman in a navy blue fleece jacket step off her porch with several plastic totes in hand, set them on the ground, and drag the lot in my direction with a rope attached to the biggest—and bottom— tote. She looked up and smiled, not quite sure she recognized who it was passing by her front yard, but ready to greet the person graciously, nonetheless.

“Gracious” the perfect word for this matriarch. Renowned artist, author, and book illustrator, loved and respected in her community and far beyond, Diana Tillion is the embodiment of graciousness. We first met a couple years ago on the Stormbird, the rugged steel-hulled vessel that carries the mail to and from Halibut Cove twice a week. We spoke briefly because the mail boat trip is a great social occasion during winter, and many others were there to speak with Diana and her husband Clem.

The next time I saw her was last February. This time the occasion was movie night—Saturday night at the Tillion’s, bring a DVD movie, and the Tillions offer a spread of goodies on their large table, supplemented by additions from other cove residents. I was there for only a few hours that evening, and I am not sure she remembered me, so I told her my name again and mentioned that I house-sat for my friends Jim and Jan when they went on winter vacations.

Then, knowing that she had undergone major surgery a couple months ago, I asked where she was going with the totes. “To get some firewood,” she replied. For all I knew, she was off to fetch a chain saw and fall one of the many spruce trees in the cove that have been killed by spruce bark beetles. I was also aware that her husband Clem was not at home because I had met him a few minutes before, heading in the opposite direction on the trail I’d taken to get here. I asked if I could help, and she accepted my offer. The totes were placed in a John Deere ATV, something like a Hummer version of a golf cart, and off we went a few hundred feet to a well-stocked wood shed. 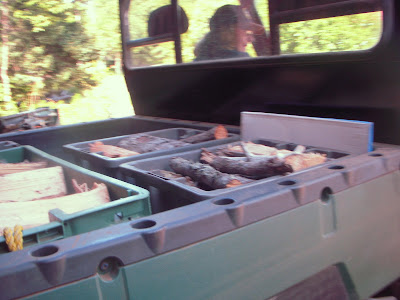 As we loaded the totes with dry split wood, I asked Diana if she was doing any painting. She invited me to see her gallery, and soon we were wheeling up a steep hill in the Hummer-cart, and coming to a stop at her gallery. We were the only two there—the tourists would arrive later on the thirty-four passenger ferry Danny J, a converted fishing vessel operated by Tillion family members.

We paused at each painting as Diana identified the location of each scene and explained why she painted it, often telling me a small story connected to the painting that gave me snippets of this remarkable woman’s remarkable life. When we reached the end of one wall, an ink sketch caught my eye. Through words and diagrams, the sketch explained how ink is extracted from octopi.

This was not an eclectic piece in Diana’s gallery, because she is famous for her paintings in octopus ink. I tried to word my immediate question carefully: “So, do you mean the octopus is still alive after you take its ink?”

“Oh, yes!” she exclaimed. Then she told me of looking for large rocks as she strolled the beaches during extreme low tides. “I look for a small hole under the rock, and if the water in the hole is moving, then the octopus is home,” she continued. “I inject a substance—I use bleach—into the hole, then stand behind the rock until it comes out. I pick it up, turn it over, and use a syringe to withdraw the ink from the gland.”

I had visions of suckered legs wrapping around her arms and a face full of squirted black ink as she extracted her art medium, only a few cc’s worth per octopus.

“When I’ve finished,” she said, “I set the octopus down and it scurries away.” She smiled and so did I as I watched her eyes sparkle with the telling of the tale. So, it is no small wonder that my favorite painting among the many was an octopus ink drawing of the cove on a foggy morning. I do not know much about art and painting techniques, but I appreciated a deft touch in the strokes that rendered the fog. 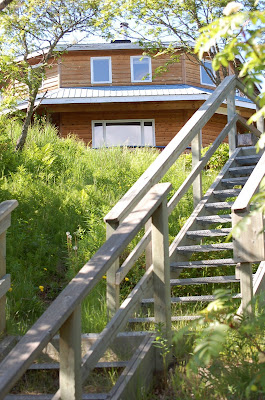 “Come with me,” she said, “I want to show you the bird room.” We walked around a partition to a quiet corner of the gallery floor. On the walls and on the center display were numerous paintings of the birds she has seen in more than a half century of living in Halibut Cove. “I learned to turn my back to them,” she explained. “Then I slowly turn to face them, and they will sit and let me sketch them.”

She identified each bird, many of which I’ve never seen, living inland as I do. And then we went to the top floor where she plies her craft. On various tables were works in progress “by the kids.” She explained that her grandchildren come here to practice drawing and painting. Diana Tillion was the driving influence behind Halibut Cove becoming a community of artists in all media, painting, sculpture, ceramics, jewelry, and writing.

As we left the studio, I was in awe and almost speechless. Not only was I in the company of a living legend, not only had I received a private showing of her exquisite art, not only was she chauffeuring me down a steep hillside in this golf-cart-on-steroids on a gloriously sunny summer day in this picturesque village by the sea, but I knew in my heart how very special this visit was, and there was more to come. 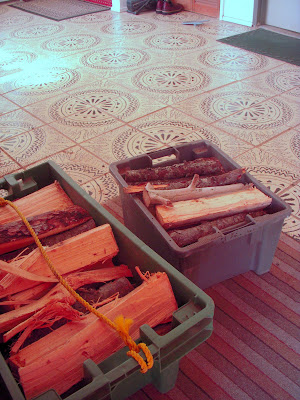 
Back at her home, we unloaded the wood-filled totes from the cart and set them on the tile floor inside her front door. While I was unloading the last two from the cart and placing them inside, I was only dimly aware of what she was doing. It appeared to me that she was stacking two totes in a cabinet.

Wood box, I said to myself, then wondered where she would put the other two. She pushed a button beside the cabinet. Suddenly I realized what she was doing. The cabinet was not a cabinet at all, but a dumb waiter that raised the two totes to the second level—the main living level of their home. She delighted in showing the whole operation to me, pushing the button to return the two totes to the ground floor so I could take a photograph, and she graciously consented to be in the picture. 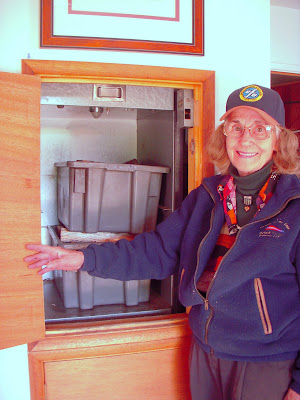 Diana and the firewood elevator.

Clem returned from his jaunt as we were finishing up. He is a remarkably robust man of eighty-four, another living legend in . A long-time commercial fisherman, patriarch of the Tillion clan, he served nine terms as a state legislator and has been a leading advocate for fisheries management for many years. If there’s a board that has to do with commercial fishing in the , most likely Clem has either chaired it or been seated on it.

I turned to say goodbye to Diana. “I hope to see you again soon, Diana,” I said as I put my arm around her slender shoulders and gave her a hug.

Wrapping her arms around me tightly, she said, “I hope so, too, dear. I really hope so.”

Sometimes, I am not aware of all the complex factors that intersect to allow a certain thing to occur. Sometimes, I am oblivious to lady luck, chance, and fate. But Serendipity? I know Serendipity. And I know how very blessed I am to have visited with the Lady Diana, to have helped her with the firewood, to have received a personal tour of her creative sanctuary, and to have spent a few fleeting minutes with her when Serendipity and I happened to stroll by her home on a sunny afternoon in Halibut Cove. 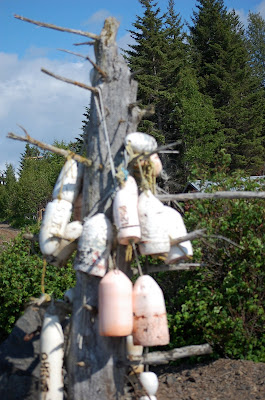 A float tree near the Tillion's home.