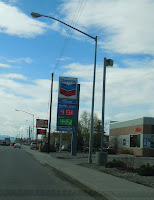 There are all sorts of things that make driving on Alaska's highway exciting, from the astronomical prices for gas to the jaw dropping scenery.

In between are a number of other reasons that contribute more than their fair share.  Tourists and residents alike will putter down Turnagain Arm, gawking at the mountains, water, and wildlife.  Land yachts slow down the traffic flow, creating long lines of vehicles and incensing drivers anxious to get to their favorite fishing holes. 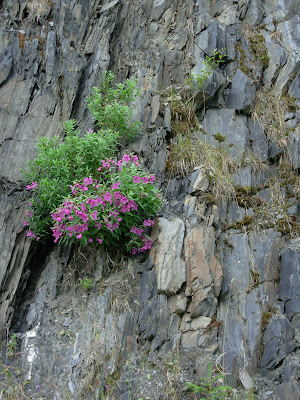 For some, it's the abundant wild flowers that ease the foot off the accelerator; for others, the scenery alone is enough. 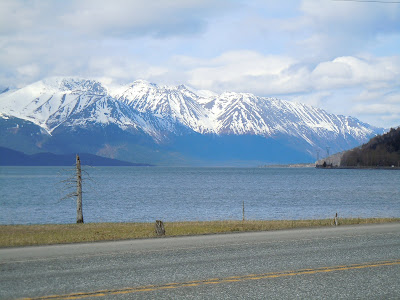 Forty miles south of Anchorage, hooligan fishermen are so numerous that the state has reduced the speed limit through a several miles stretch just for safety. 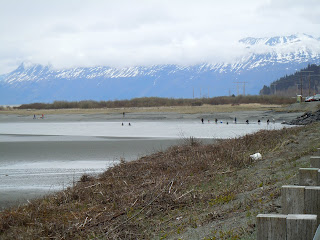 Even standing in the cold gray salt water of the arm is dangerous.  Thirty foot tides can run at fifteen mph, with bore tides (the third highest in the world) bringing in a wall of water from several inches to mofre than a foot high.  Plus, the clay and silt bottom acts like quicksand when disturbed and several people have been rescued just before they drowned in an incoming tide.  Others weren't so fortunate.

Then, there are avalanches.  Not so dangerous this time of year, but their little cousins the ice floes are making themselves known. 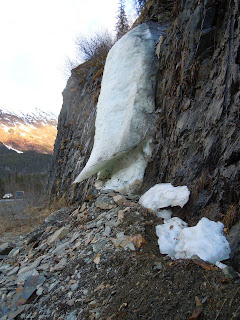 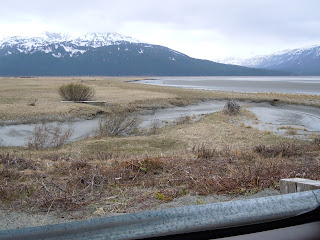 But for adrenlin surging drama, there's nothing like having a half ton moose cross the road in front of you, leap high guardrails in a single bound, and totally demolish you and your car.  Usually they are nocturnal, but they are spotted often enough during daytime to keep us from being complacent, like this one that ran in front of me in late afternoon Wednesday. 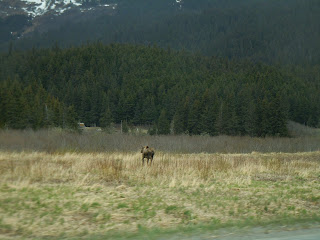 Often they wind up in the front seat, flailing sharp hooves seeking purchase of any kind, even if it's your face.  If you're lucky and alert, they will escape into the woods, leaving you with shaking knees and an immediate need for a rest stop.

It's also dangerous for the animals.  In a few mile stretch, I've come across fourmoose carcasses, a wolf carcass, several porcupines, and uncountable snowshoe hares.   Plus birds in all shapes and sizes.  In the past years, I've found the skeletons of several great horned owls that were obvious road kills. 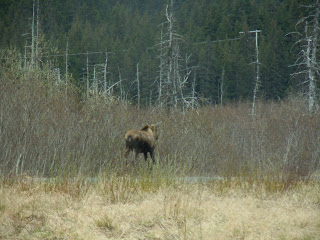 But the ones you really need to watch for are the roadside browsers.  Most times they stand still, contentedly eating , or turn back into the forest when they see vehicles.  The two below, the first ones I saw last evening, were a cow and year old calf.  The calf remained and the cow disappeared into the brush. 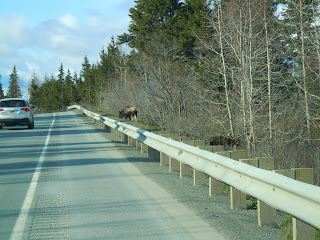 The big hand was on twelve and the little hand nearing 11 when I was on my way home last night and spotted a familiar scene--two moose browsing roadside. 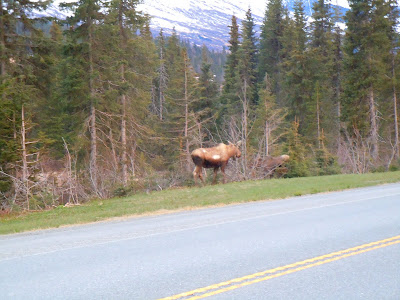 My truck was the only vehicle on this stretch of road when I spotted these two.  The larger one, a cow, turned towards the smaller one, obviously her year old calf, and it ran back into the woods. 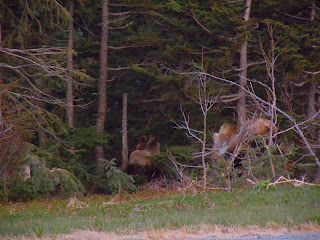 She continued to browse, but ever mindful of what her calf was doing. 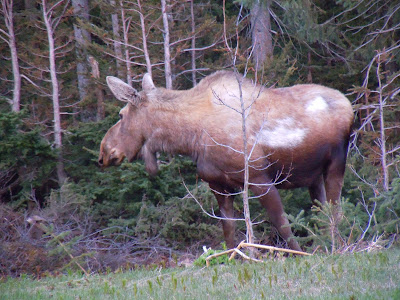 She didn't care that I was stopped opposite her taking pictures.  Those new green shoots were too tempting for her to bother with a mere mid-sized pickup truck. 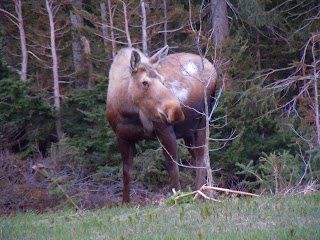 Traffic came and passed, and she couldn't be bothered.  Her only concern was her calf. 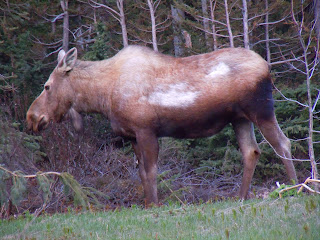 I saw the calf come out of the trees and approach the roadside near where mom was browsing.  Mom knew it way before I saw it, and she was having none of it. 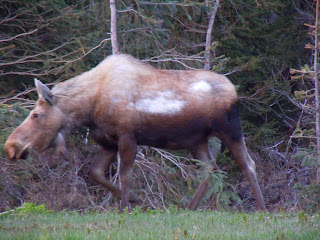 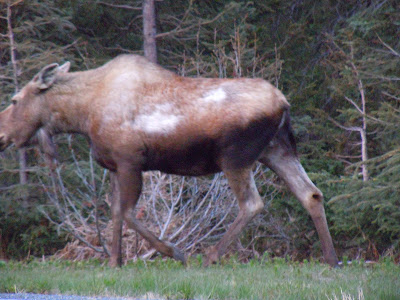 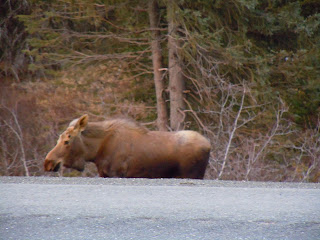 The calf retreated, then made a break for the highway and ran across it.

Oddly, mom didn't seem to mind.  She just went on browsing.  Perhaps she realized the calf was safe.  I was the only one around, and my truck was parked. 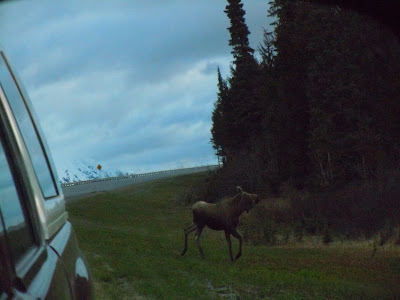 Junior made it safely across, and then stood there looking at my truck for a few minutes before wandering off into the hemlocks. 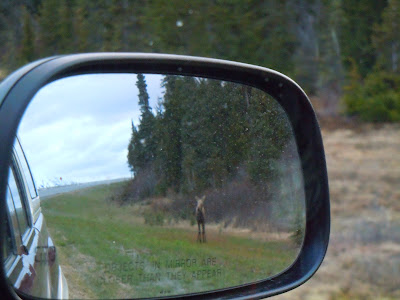 This was the first time I've observed a road-savvy mother moose, one who kept her young one away from a dangerous road.
Posted by Gullible at 1:43 PM