That warm and glorious spring weather that tanned my face and arms from elbow to wrist came to a tempestuous halt Monday when a snarling storm thrashed its way out of the Bering Sea, up the Aleutian Chain, and right into the valley where Dave and I were starting the railings around my decks.

No more warm sunny days.  The guard rails and hand rails mandated by my insurance company had to be built this spring without fail or my homeowner's insurance would be canceled.  Again.  Well, maybe "again" is not the proper term.  State Farm refused to renew my insurance (after many, many years) last December and I was forced to find another insurer.  That second company granted insurance on the condition the rails went up this spring.

I didn't want rails in the first place, but as this house is my old age pension, I acceded.


The worst part about that storm was the wind that propelled it.  The spitting rain we could work in, but that wind had me dressed up like the temperature was below zero. 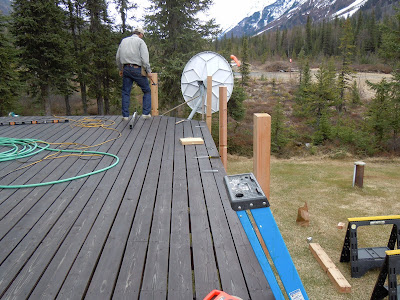 I was, as they say, on the dumb end of the board, and thus not moving around much.  Dave was able to stay relatively warm in the 46 degree temps, though each day he came to work he dressed slightly warmer than the day before, progressing from a cotton shirt to flannel to fleece.  Forty-six degrees is a pleasant day around here, but not with winds strong enough to blow boards and tools off the deck. 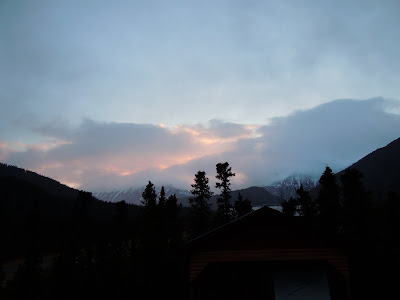 Thursday, between the rain and wind and lost power, we quit in the early afternoon.  The storm had knocked out the electricity sometime during Wednesday night, and we used generator power for a few hours, until the rain started falling in earnest.

That night about 11 PM, I looked outside and saw clear blue sky.  Maybe this was the end of the storm.

Friday morning was windy and rainy.  The storm has simply regrouped, and if anything, the day was colder.  By late morning, conditions seemed to be improving and Dave showed up in a fleece shirt.  I was dressed for minus twenty. 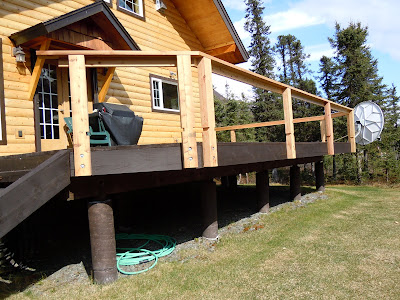 We worked until 5 PM, putting on the cap rails.  At 6:30, I couldn't stand it any longer.  I drove twenty miles from home and cleaned up another mile of highway litter.  The storm had lessened by then and at one point I almost took off my jacket.  I have now reached the Hope cut-off.

Driving back home at 9 PM, the sinking sun lit the mountains through the separating clouds. 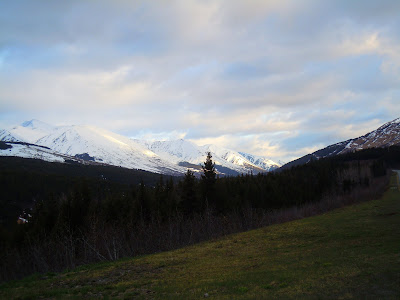 As I climbed the steps to the deck, I noticed the mountain to the south of me had shed more of its winter burden of snow. 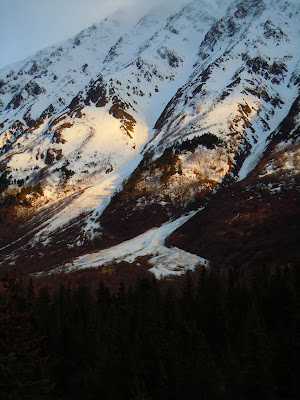 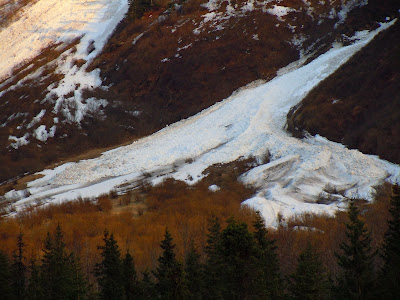 Assuming the world doesn't end this weekend, we will be well on the way to placating a certain insurance company.

I'm hoping Mother Nature shed her final winter burden with that last storm and she settles down to enjoy the summer.  Maybe I can finally put away my winter clothing, too.