Why, you might ask, would I park my very nice Toyota Sienna mini-van in the garage all winter and instead drive my Dodge Dakota mid-sized truck?
The Toyota is exceptionally nice, with leather seats, automatic doors, even a video player with fold-down TV screen for the rear seat passengers.  It gets 26 mpg.  Other than a battery-draining problem right after I bought it, it has given me no trouble.
The truck is very nice, a crew cab, has four wheel drive, and gets 16 miles to the gallon.  It likes to spend about $1500 worth of time in the repair shop almost every year.
So, why?
This Dodge Grand Caravan pictured below is the reason. 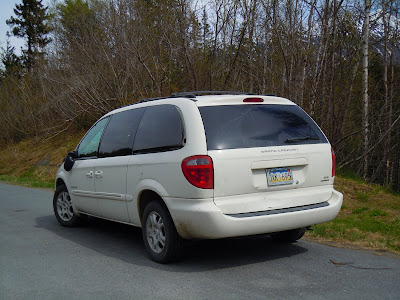 I came across this vehicle this afternoon on my way to my current litter-picking site.  It was parked in a pullout, with no one in the car.

A hundred yards up the road, two women from Cooper Landing were parked on the shoulder of the highway.  This is what they were doing: 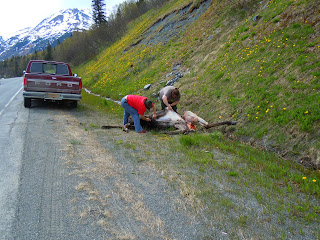 Mmm-hmm.  They were dressing out a road-killed moose cow.

Here's a few more photos of that mini-van with the sloping hood. 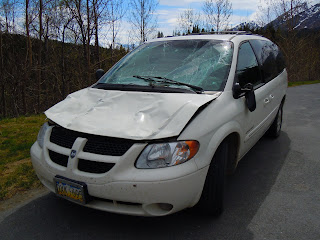 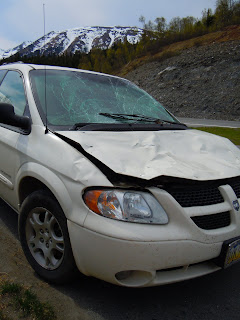 Later this evening I was heading home and stopped at this same pullout to pick up any new litter.  A fellow was there, getting ready to tow the Dodge home.  This is what he told me:

The moose had come down a steep, brush-covered embankment which hid her approach to the highway.  She was no farther than twenty feet from him when he first saw her and didn't have time to react.  His five year old son was in the rear seat.  Neither were injured.

A number of people stopped.  The driver of the Dodge used a pistol borrowed from a passing trucker to dispatch the suffering moose.


Like most of us who have lived in Alaska for a while, we've all had close calls with moose.  What's important, as the father said, "My boy's alive. He's my only child.  My boy's alive and unhurt."

This is one of the reasons a number of Alaskans drive trucks and large SUVs.  This is the reason my mini-van stays in a heated garage all winter when moose/vehicle collisions are more likely to occur because of the darkness.
Posted by Gullible at 11:53 PM