Automatic Out of Office Reply

My nephew does things like that--have an automatic message reply to any e-mails when he's out of the office on one of his trips to chase sea lion poop or whatnot in various oceans and seas.  He's clever like that.  The computer stuff, I mean, though he does gather sea lion poop, too.

I learned a long time that if you live in Alaska, you can't let the weather interfere with your plans, unless,of course, you plan on flying in a small plane.  Then you MUST let the weather dictate your plans.  The weather was supposed to get nice today and nicer tomorrow.

Right now it's raining.  Thus, very shortly I am off an hiking in a cloud of raindrops.  Fits right in with doing stupid things all my life.

Be back in a few days.  Or maybe a few hours.  By the way, I changed my route after Irene told me she had seen LOTS of bear signs on the Hope end of the trail.  By bear signs I mean bear poop.  (This post is stuck on poop, isn't it?)  So, I will go in from the Cooper Landing end of the trail and maybe come out Devil's Creek trail, which ends three miles from my house.

By the way, I told you a few posts ago that Sailor Boy had announced they were going to stop making pilot bread, but that such lamentations went up from Alaskans that they now continue making it just for us.  Remember?

You thought I was either exaggerating or telling an outright fib, didn't you?  Maybe placing too much importance on we few Alaskans? 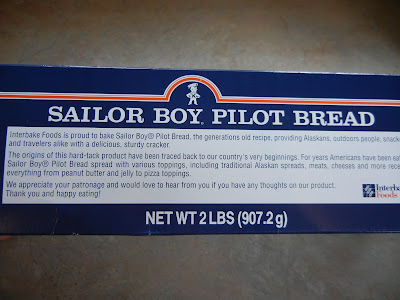