"To know the road ahead, ask those coming back."
-   Chinese Proverb
"Let no one be deluded that a knowledge of the path can substitute for putting one foot in front of the other."
-   M. C. Richards
Part One 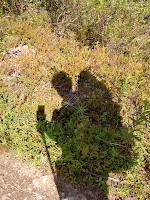 Call it a premonition.  Call it an informed decision.  Call it damned fool stupidity.  Once I made the decision to change my route and start at the southern end of the Resurrection Pass trail, most of my bear worries dissipated.

The odds of running into a black or brown bear on the trail were still high, but my anxiety had disappeared, that same anxiety that had kept me awake for a couple hours the previous night.  I had to force myself to think of something other than bears so I could get to sleep.

Where this late onset, outlandish fear of bears has come from, I can’t say.  I’ve lived around bears all my life, they’ve been in my yard, waked up my driveway, scavenged for salmon in the little creek behind my house.  I almost walked smack into a bear years ago and would have had it not grunted when I was less than eight feet from it.  I still remember the look of disbelief on that bear’s face and how my insides turned to liquid when I saw it. 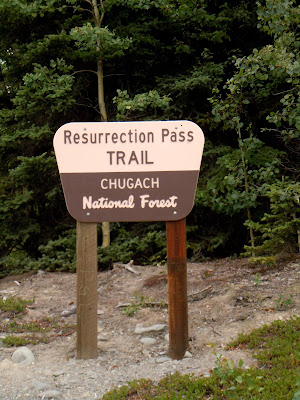 I finished my peanut butter and jelly sandwich and lifted that heavy pack, balanced it on my left knee. and slipped my left arm through the shoulder strap.  That was the hard part, compensating for a worn out, arthritic, frozen shoulder.
I bent over, letting all the weight of the pack settle on my back while I struggled to get the right shoulder strap in a position where I could get my arm through it.  I fastened the waist cinch strap and stood up.  Then I pulled the shoulder straps tight.
The bear spray went into its makeshift carrier.  The chest strap was threaded through my camera case and snapped.  I clipped my bottle of lemonade onto the waist strap with a caribiner and picked up my hiking pole. 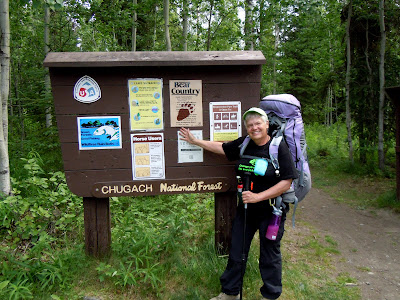 All saddled up.  Time to start this experiment.  One foot in front of the other.
The trail began with a series of switchbacks through birch and spruce and cottonwood trees, and wildflowers, to gain elevation.  Eventually I could see bits of the Kenai River far below as the route led slowly, slowly inland yet continued to parallel the highway.  I met a couple day hikers coming down the trail.
Farther upwards, farther inland, following the Juneau Creek canyon, the trail was lined with wildflowers on both sides.  Arctic roses, monkshood, lupine, Jacob’s Ladder, geraniums, fireweed, all kinds of flowers.
And then: 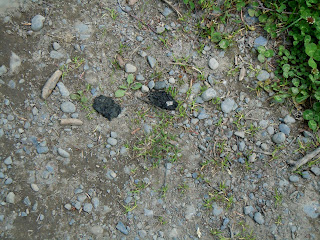 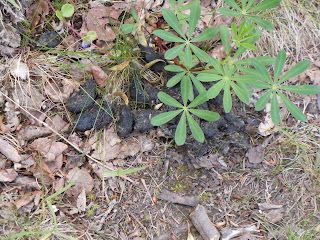 Fairly fresh, but such a small amount.
In an area where the cow parsnip and fireweed was over my head, I encountered seven people.  A woman was leading a pony and a dog.
“We call this our dog and pony show,” she laughed.
I walked and walked.  I could still hear highway noise.  Ever so often, the vegetation thinned and I could glimpse the river and Gwin’s Lodge far below.   Always.  Every time I thought I was farther north along the highway, I’d look down and I could still see Gwin’s Lodge.  I began to hate Gwin’s Lodge.
I met a group of five and we stopped to chat.
They asked where I was going and I said I didn’t know yet.  I was on a journey to nowhere in particular.
Serendipity slipped through the wildflowers and joined the conversation.
Where was I from?
“Moose Pass.”
“Oh, do you know B-----?  She bought our house in Anchorage.”
“Of course I know B-----.  She bought your house?  Then….   How is she?”
“She’s well.  She had her cancer treatments and is doing well.”  They elaborated.
The conversation turned back to the trail.
“Beautiful camping spot at Juneau Falls,” they reported.  “If you come to a bridge, you’ve gone too far.”  I made a note to check that out, even though the falls was only four miles in and I wanted to go farther than that.
“Any bear sign?” I asked.  This was a question that became a constant, asked either by me or hikers I encountered.
“There’s fresh bear scat on the trail that hadn’t been there when we detoured to Juneau Falls, and we were only in there a half hour at most.”

Ducky, I thought.  Then we went our different ways.
I found fresh bear scat.  Should be close, I thought.  The side trail, not the bear.
I came to a post on the side of the trail.  A tent icon was carved into it, an arrow pointed up the trail, and ¼ mi. below that.  I misconstrued that to mean the side trail to Juneau Falls was a quarter mile yet.
I came to the bridge-too-far.  I wasn’t going back.  Another post and an arrow pointed to camping spots along the creek.  For the first time, I took off the pack and declared an extended rest stop.  I’d had a few mini-breaks so far, when the trail sides offered a place to sit where I could take the weight of the backpack off  without unsaddling.
As soon as that pack was on the ground rather than on my back, I had a fleeting sensation of floating.  I dawdled around, refilled a water bottle and dropped in a treatment tablet.  I’d walked four miles so far.  According to the info I had, a tenting spot with a steel bear-proof box for storing my food was 2.9 miles away. 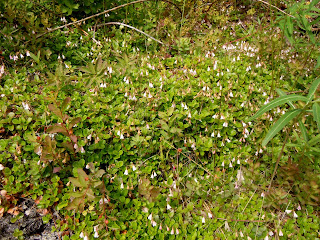 That, I decided, would be my destination for the day.
Posted by Gullible at 6:04 PM