The Resurrection Pass Journals, Chapter One

Weight and Balance
Part One

God made the world round so we could never

see too far down the road—Isek Dinesen
I like to plan ahead.  I like to know where I’m going, what to expect when I get there, and what I need to take.  Most times, I over-plan. 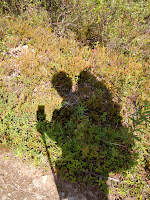 In preparing for this hike into the mountains, I had four major concerns:

1.  Brown bears.
2.  My feet, specifically the bunions on both feet that are rearranging the positions of my toes.
3.  The rest of me.
4.  Black bears.
It wasn’t that the territory was unfamiliar, though it had been something like forty years since I’d been in there during summer.  I’d traveled part of it by dog sled a couple times, and once by snowmachine.

I accompanied my husband and a good friend once on a moose hunt.  The friend rode his horse, other horses carried our supplies, and my hubby and I had a horse to share.  At the outset, we quibbled over who got to ride and who had to walk.  After a few miles, we were arguing about who got to walk and who had to ride.
As to my first concern, the bears that inhabit this area, I checked with a friend who said she’d seen lots of bear sign at the Hope end of the trail and none near the Cooper Landing end.  I immediately changed my plans and decided to start at Cooper Landing, and exit Resurrection Pass by the Devil’s Pass trail that intersects the Resurrection Trail at its mid-point, a distance of somewhere between twenty-six and twenty-nine miles.  (Sources vary.)
I read about a brown bear attacking three bike riders and learned that while they were carrying bear spray, it was in one of their packs. I decided I wanted my bear spray ready for quick draw.  A Coleman semi-rigid  container for keeping beverages cold was the answer. 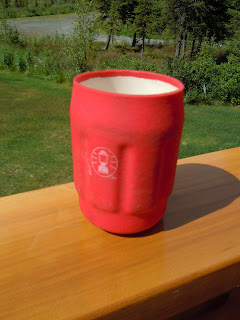 I cut two slits in the container and threaded the cinch strap on my backpack through them. 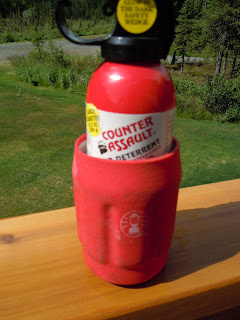 My camera went into a small padded case on the chest strap of the pack and a water bottle hung from a caribiner on the cinch strap.  My pink handkerchief from Parker Ranch in Hawaii was tied to a shoulder strap. 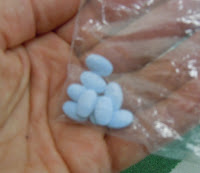 In the tiny pockets on the cinch strap were Zip-locs with Aleve and insect repellent wipes.
There wasn’t much I could do about the weight of the essentials:
Empty backpack                       6.2 lbs 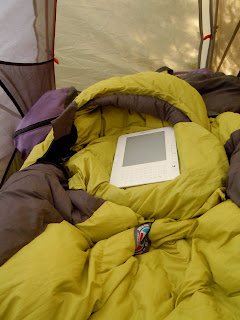