The fourth day of July in 1776 is when it all went down, to use a current colloquialism.  Wow.  That’s two hundred and thirty-five years ago.  Ancient history.  So far in the past it may as well have been in the cretaceous age when T-Rex was king of the hill.
Or is it?

Two hundred and thirty-five years is three of my lifetimes plus fourteen years.  Three.  Three times seventy plus 14 years.
My life so far seems to have passed in a flash, if I forget about a few terrifying times when time stood still.  A second seventy years would be like a moment and a third seventy like taking a deep breath.  After that, fourteen is nothing, though when I WAS fourteen I thought I’d neeeeever reach twenty-one.
When I look at it like that, it really wasn’t so long ago that those delegates to the Continental Congress declared our independence from the Great Britain, which they did on July 2.  *
The document known as Thomas Jefferson’s Declaration of Independence, which justified the prior act of the Congress, was adopted on July 4 to make our mutiny legal.  Then to confuse things further, most of the delegates didn’t even sign it until August 2, when a nice clean unmarked copy was available.
George Washington, camped with his troops near New York, heard about it Aug. 9.  Fortunately for him and all the rest of the “traitors,” the British in London weren’t clued in on the news until Aug. 30.
Remember, they didn’t have Twitter and that document had to be written with a quill dipped in ink and it’s pretty hard to erase ink.  No ballpoint pens or ink jet printers, either.
Now that we’ve condensed time and made it more relevant, let’s consider the constitution and Bill of Rights that came after our independence.
I have the easy part in all this.
I can gripe about my government officials ad nauseum and no gendarmes will appear to put me in the “care” of my government, assuming I haven’t threatened them with anything stronger than not voting for them again.
I can attend meetings where others gripe.  I can own firearms as long as I abide by the laws governing their use and don’t point them at anyone in a threatening manner.
I am not bound to worship in a church that is the church of the land.  I can choose my own religion.  Or not.
If I’m suspected of committing a crime, a myriad of court rulings ensure I have a fair trial, including being judged by a jury of my peers, but “peers” is a word that really needs some fine-tuning if you ask me.  I don’t have to testify against myself or incriminate myself.
I don’t have to surrender my home if the military needs quarters for its men, unless I agree to it.  If there’s shooting in my area, you can bet I’ll invite a bunch of young, strong, well-armed soldiers into my home.  I’ll even cook for them and do their laundry.
I have the right to choose those who will represent me at the local, state, and national level.  Then I can gripe endlessly about what buffoons they are and the next election day, I can vote them out of office.
The newspapers, radio, and television are not the mouth of the government.  They’re the mouth of whoever owns them, sometimes, but those same documents guarantee those owners the right to mouth off.  It’s up to us to find the Waldo-of-Truth in all that print and noise.
Which brings me to my responsibilities in all this.  I pledge allegiance to my country.  I vow to protect that Constitution.  I promise to abide by the laws that create a society for the betterment of us all.
I’m considered equal in the eyes of the law, but I am not guaranteed equality in all things.  I must work for my comfort and for what I want.  If I want to be president of this country, I have the right to strive for that position.  It takes work; it won’t be given to me.
As I said, I have the easy part.
The hard part was performed by my friend Chris and all the other men and women like him who, for three of my lifetimes, have and are protecting, defending, and sacrificing for me. 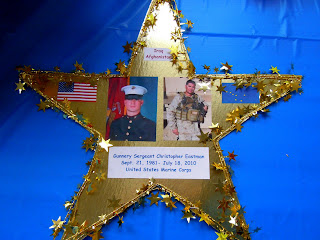 My gratitude to them is sincere, bottomless, and everlasting.