It's probably the shortest marathon run in the world, but for endurance-testing is has to be number one.  The 84th running of the Mt. Marathon race, a mile and a half up a 3022 foot mountain and back down again for a total of three miles, the race is the premier mountain race in Alaska.

I set my alarm extra early last night to get up early enough to be in Seward for the 9:30 AM start of the juniors race.  As usual on the Fourth of July, I drove around the narrow streets of Seward for some time before I found a place to park.  Then I walked over to main street.

Here they are, all lined up on Seward's main street for the morning start of the Mt. Marathon Junior race.  At the starter's signal, they were off and running uphill. 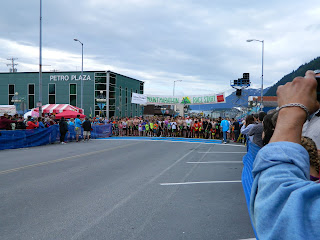 The large light spot on the mountain is the turn-around point for the juniors. 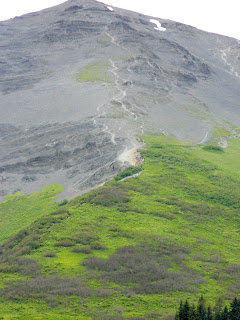 Then, less than a half hour later, a long, lean runner came flying down the street towards the finish line.  He was all alone.  Here comes my friends Miles, the one I wrote about in "Running Away" on June 22. 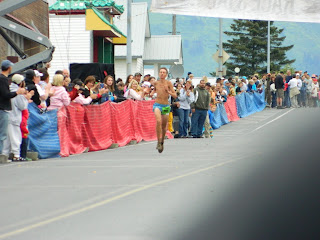 I missed part of him because I was trying to lead with the camera to keep up with him.  Notice he's in no distress whatsoever. 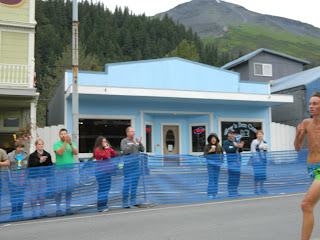 There he goes towards the timer. 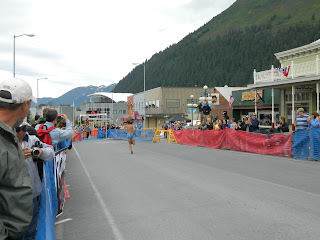 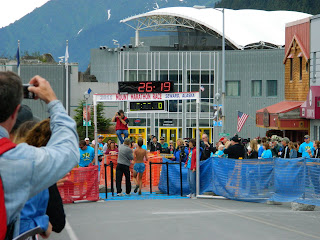 And he's in at 26 minutes, 18 seconds.   Reportedly, this is the second fastest time ever recorded by a junior racer in the history of the race.  He smoked the next finisher by about a minute and fifteen seconds. 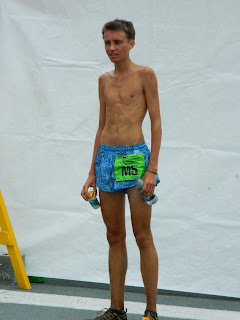 Every woman in Moose Pass wants to fix Miles a hearty meal, but Miles has inherited his dad's lean build.

Finally, at almost two and a half hours, came the announcement.  Joy Eastman, my long-time friend, was on main street.  I turned on the camera and leaned out over the barriers.

Joy, 66, was running the race in honor of her son Marine Corps Gunnery Sergeant Chris Eastman, who was killed in Afghanistan in July a year ago.  Chris has run the junior's race several times, in addition to be a star athlete at Seward High School. 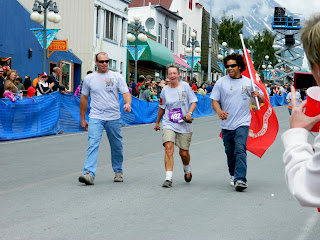 Accompanying her to the finish line are Joy's son Buddy on the left, and her son Jason carrying the Marine Corps flag on the right. 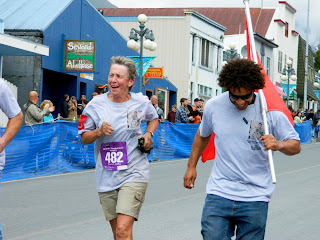 Buddy is from Joy's first family of four;  Jason is the eldest of four boys Joy adopted as her second family.  Chris was one of those four boys.  Jason won the junior race twice
. 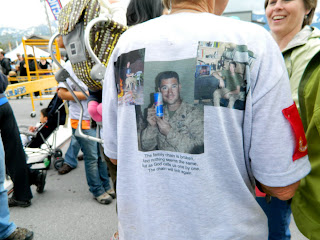 And she's done it.  Her first Mt. Marathon run.  The crowd went wild, applauding and cheering.  Chris was a much-loved young man. 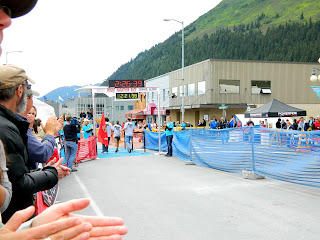 In the picture below, Joy is trying to convince her namesake granddaughter Joy (the older of Chris's two daughters), that the bleeding scratch on her calf really doesn't hurt.  Little Joy is skeptical and is sure Grandma is injured. 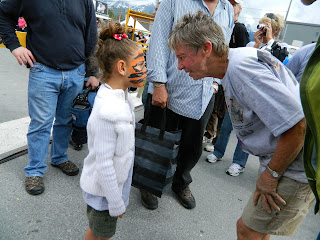 Well, Joy and the rest of us hurt all right, but it isn't from scratches and cuts.  We miss Chris.  I watched him grow up to be one the finest young men I've ever known.

(If women and kids run this race, you might think, it can't be all that tough.  Uh-huh.  Go to the address below and take a look at the gallery of photographs there. You'll have to copy it and paste it in your browser. There's a phenomenal one of Miles coming down the mountain.)

For the Anchorage Daily News' story about Joy: