The China Journals, What Constitutes a Successful Trip? Part Two

Successful Trip Event Number One
Xi’an, China
We returned in late afternoon to the ancient capital city of Xi’an, China, after spending most of the day viewing the most remarkable archeological find of the 20th century.  Discovered by a peasant farmer in 1974 as he was digging a well, the terra cotta warriors are a continuing “dig” as more sites are found. 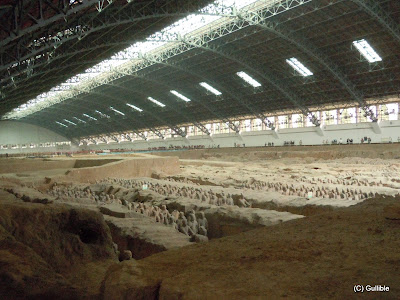 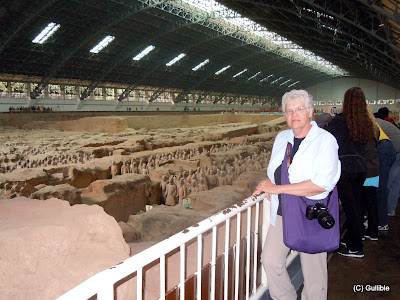 The shear enormity of the sites is mind-boggling.  These warriors and archers were fashioned after real soldiers and each one is different. They are formed in phalanxes, interspersed with horsemen and chariots, all to guard the burial site of a Chinese warrior who feared his tomb would be raided. 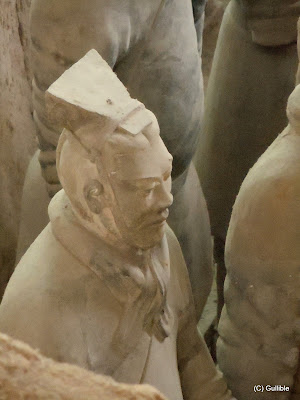 In an adjoining gift shop, we meet the elderly man who found the site, shake his hand and have photos taken with him—all for a price, of course.  This is how he makes his living.  He is in his eighties and not always able to be in the shop. 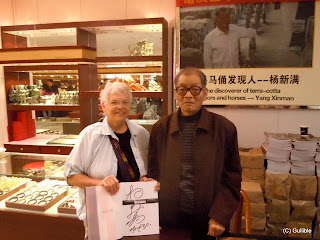 He will even autograph a large and exquisite picture book, if you purchase it and tip him.  The finest calligrapher in China was sent to teach this farmer how to write his name, specifically for this purpose.
Once back at our hotel, our guide reminds us that we will leave very early in the morning for our flight to Lhasa, Tibet.   We are also on our own for dinner this night, free to explore local cuisine.  Unlike the looks of near-panic that suffused our faces when first presented with a “free night” in Beijing, we are fine.  We can do this.
The previous evening we had been treated to a dumpling dinner, which is the culinary specialty of Xi’an.  We emerged from the dumpling restaurant after nightfall to the beautiful illumination of both the drum and bell towers.

This evening, some go out.  Others, including me, opt to eat in a casual café in the hotel, rather than in the dining room where meals are buffet style. 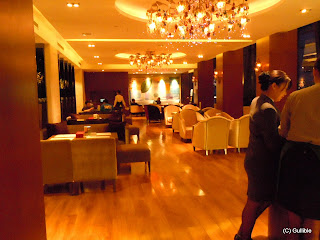 The menu in the café includes variations on western food, and a few Asian choices.  I opt for a sweet and sour dish and it is soon delivered.  After I finish, the server brings a cup of chicken soup.  I didn't expect it and I don’t want it, but feel I should make it look like I ate part of it.
I’m about to dip my spoon in the cup when I see something that looks like a chicken bone.  This doesn’t faze me because I am already used to chicken being cut up into bite-sized pieces, bone and all.
Then I look closer.  I dip my spoon in to remove what is indeed a bone.  However, attached to the bone is a chicken foot.  I burst out laughing and reach for my camera.
I have a lot of fun that evening and the next day showing the photo to my fellow travelers.  Already I know this will be a trip to remember—for more reasons than one but especially for getting a chicken foot in my soup.  Much better than getting the bay leaf.
Posted by Gullible at 11:04 PM