The China Journals, What Makes a Trip Successful, Part Three

Successful Trip Event Number Two
Countryside in Tibet
We are traveling north out of Lhasa, Tibet, into the almost treeless countryside.  This is farming country and the crop is most likely the all-important barley.   Everywhere I look there are Tibetan nomads and farmers harvesting barley at the 13,000 foot altitude. 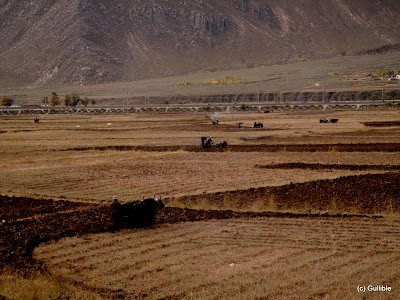 The highway winds along the right side of this narrow plain with the Himalayans demarking each side.  On the far side is an elevated berm running the length of the valley.   The sides of the berm are landscaped into diamond shapes, mile after mile of diamonds.  Eventually the mountains constrict the valley and we are close enough to see railroad tracks atop the berm. 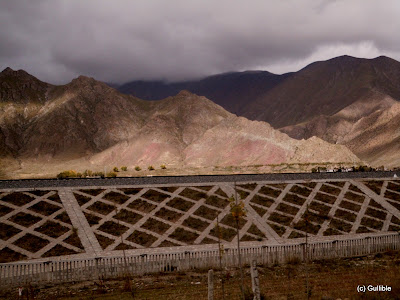 This is the famous rail line from Beijing to Lhasa, completed in 2006 and is the first railroad in or into Tibet.  At one point, the train climbs Tanggula Pass, 16,640 feet above sea level.  The passenger cars have oxygen supplies for each passenger and a doctor is on each train. 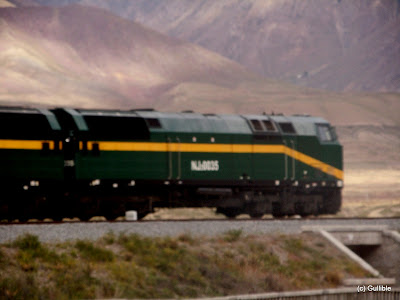 I gaze at this railway as we bounce over the narrow two-lane asphalt highway and not for the first time wonder how China can build such an engineering marvel yet not be able to construct a smooth road.  I live in a land of permafrost and know about the difficulties inherent in building roads over such conditions, so I give China a pass on this one.  However, add the frequent horn-honking to the jarring mix, and the four-day migraine brought on by high altitude has bludgeoned my brain into gray pulp that clamors for dark, cool, and quiet.

I have been looking forward to this expedition into the countryside and I’m not about to let a headache stop me.  I notice that there is a man about every thousand feet of railway and I wonder if they are there to keep the cattle and yaks off the line.  Eventually I discover they are armed soldiers stationed there to protect the rails from sabotage.  This is Tibet and the reality of modern Tibet is a huge Chinese presence.
I think about deleting the photos I have taken of the track-minders, remembering our guide’s admonishment against taking photos of soldiers.  “They are not there,” she said, quoting the official line.  And yet, “they” are everywhere—they even play basketball and do calisthenics outside my hotel room window in Lhasa.  Even along this highway, I have to be careful when I point my camera out the bus window as we meet a few military convoy.s
Though the railroad is changing the Tibetan economy, it is also making it easier for the ethnic Han Chinese, encouraged by their government, to migrate to Tibet, further enlarging the Chinese population in these occupied lands and further diluting the indigenous Tibetan culture.
I had asked our guide previously why China wanted this barren country with almost no industry and a fledgling tourism.  “China has always felt that Tibet is an historical part of China.”
Now I suspect another reason.  The mountains we pass are of varying colors, perhaps indicating massive mineral deposits.  But I’m no geologist, so I continue to wonder. 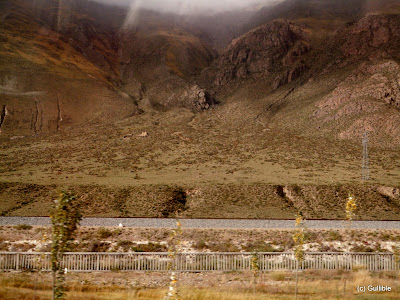 We pass ruins of monasteries, many of which were destroyed by the invading Chinese.  We drive through small villages that border the road, see men plowing the fields with teams of colorfully-adorned yaks. 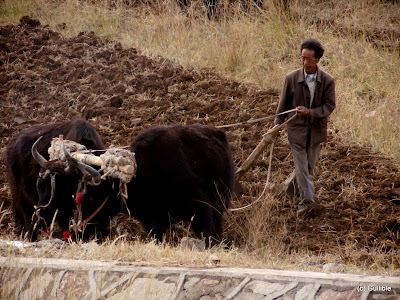 In the valleys and alluvial fans of the mountains, we see more villages, but the distances between the settlements are so great that each one remains remote. 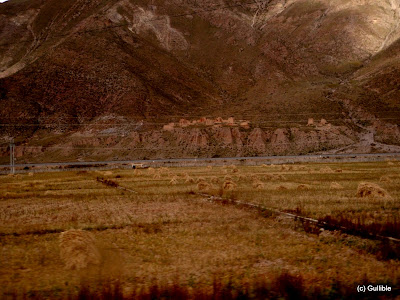 The bus pulls off the road onto a gravel wide spot next to a smal,l clear river.  Our guide says this is a typical Tibetan nomad camp and we are welcome to cross the suspension bridge to see it up close.  I leap at the opportunity, to the laughter of my travel mates.  The bridge itself is an adventure. 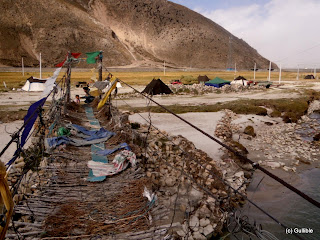 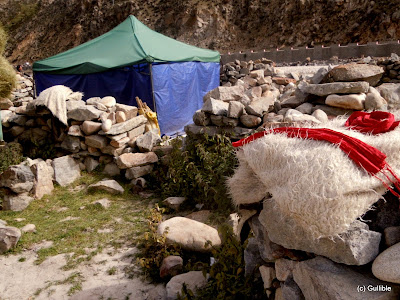 Across the bridge, I wander through yak wool tents and the ubiquitous blue plastic tarps.  I notice two men and a woman harvesting barley straw nearby.  The woman is working; the men are watching.  One man waves to me in greeting and I motion to him to come nearer. 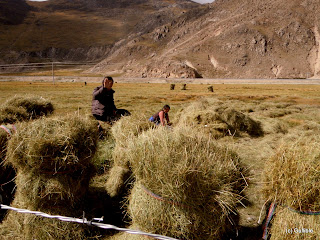 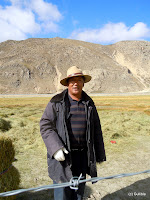 When he is across the fence from me, smiling as all Tibetans do, I hold up what is in my hand and –using hand signs—ask if I may have it.  He smiles and nods “yes.”  I say the Tibetan word for “thank you,” (I hope) and return to the bus with a huge smile on my face.

Everyone is already on the bus when I board.  I stand at the front and remind them about the chicken foot in my soup in Xi’an.  “This is the second one,” I say and hold up my prize, tell them what it is, and pass it to the nearest person who examines it carefully and passes it on.
In that way, a small length of yak wool braided into a rope makes it way around the bus.
I have now had my second special experience.
(Note:  We have many adventures this day, and despite my life-long yearning to visit the Potola Palace, this visit to the countryside becomes my favorite, enduring memory of six days in Tibet.) 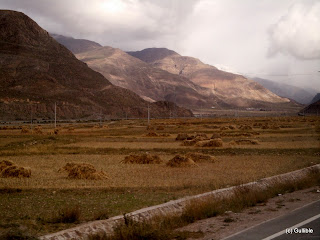