The China Journals, What Makes a Trip Successful? Part Four

Successful Trip Event Number Three
Jokhang Temple, Lhasa, Tibet
We are nearing the end of our visit in Tibet.  I think about this with a mixture of sadness and relief.
The four- day high altitude migraine continues. 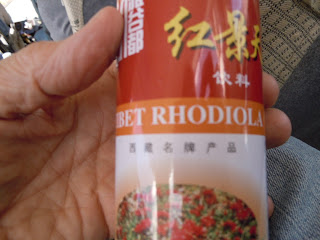 After initial hesitation and after much encouragement from our Chinese and Tibetan guides, I have been drinking a juice with rhodiola, which is the local herbal treatment for high altitude problems.
Rhodiola, which grows in cold climates, is also known as Arctic root, Golden root, and Roseroot.
Despite being counseled to not drink the juice in the evening, one of our group who had not heard the warning took a can from the beverage cart during dinner and drank it.  She was awake all night, she said, and on the verge of becoming manic.  At breakfast I tell her rhodiola also reduces fatigue, just like caffeine.  That’s why she was awake all night.

Today we board the bus to visit a large bazaar and the Jokhang Temple in Lhasa.  For most Tibetans, this sixth century temple is the most sacred one in Tibet and is the destination of many pilgrims.   It is the first Tibetan Buddhist temple built in this remote country and is a UNESCO World Heritage site. 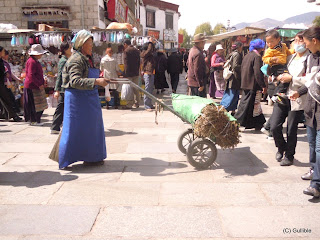 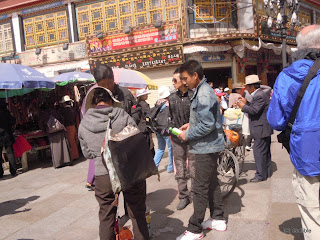 This is still holiday week, the eight days when the Chinese return to their hometowns for visits and, in the case of Tibetans, pilgrimages to sacred sites.  When we arrive at Barkhor Square, hundreds of people are there already.   Double rows of merchant booths line each side of the square and the pleasant but overwhelming scent of burning juniper fills the air.   Chinese soldiers armed with AK47s are posted nearby.
Pilgrims circumambulate the temple, performing a sacred ritual in the hope of accruing blessings in their next life.  According to Tibetan Buddhist beliefs, this life is already written.

In front of the entrance, dozens of Tibetan Buddhists prostrate themselves on thin mats or on bare paving stones, rise to a kneeling position, then slide their hands forward to lie prone again.  Some have their legs bound together to avoid insulting Buddha should their legs spread after a few hundred protestations.  They will prostrate themselves as many as five thousand repetitions at each ritual.

A crush of pilgrims flows towards the entrance and our guide warns us to try to stay together.  She also recommends donning our face masks as the scent of burning yak butter and incense will be very strong inside.  Many in our group have dull headaches from the altitude and find the smoke and scents compound the problem.

The portal into the temple is approximately six feet wide and perhaps that deep.  There is a threshold to step over that can be anywhere from six to twelve inches high.  It is there, like almost all the old buildings in China and Tibet, to keep out evil spirits.  Because of the crush of humanity seeking entrance, we cannot see it so we shuffle along until out feet bump into it.
Those of us going into the temple are going into near darkness.  Those exiting are going from near darkness into the blinding sunlight of high altitude Lhasa.  We are two and three across, leaving little room for those exiting.
I see a Tibetan monk in a saffron robe stumble over the threshold as he tries to find his way out.  He reaches out to stop his fall and his hand lands on my right boob where it remains for three or four long seconds.  I am taken by surprise but have time to consider two options:  I could remove his hand, thereby embarrassing the monk (or perhaps disappointing him), or, I could act as if nothing is out of the ordinary , as much as having a Tibetan monk's hand on my right breast could be considered ordinary.
I do the latter, biting my lip to keep from exploding in laughter.  I am, after all, in a holy place.  I cannot wait to tell my friends.
This becomes my third moment of adventure.  A chicken foot in my soup, a length of yak wool braided into a rope and given to me by a Tibetan nomad, and a grope from a Tibetan monk, even if he didn’t know what he had hold of, is more than anyone can ask.  And none of those things are on the official itinerary.

This trip, three weeks in China and Tibet with great guides and wonderful traveling companions, is a roaring success.
***
More photos from the Jokhang Temple. 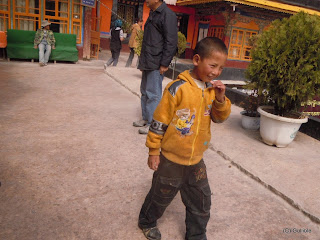