I'm what you call a cheap date.  Simple lunch.  Afternoon matinee at senior prices.  Half a mai tai and my face starts going numb.

It also doesn't take much to entertain me.  For instance, consider that I've been in Halibut Cove house-sitting and opening the door for Geri the Cat on command (hers) for almost three weeks.  Not once have I felt the need to catch a ride on the twice weekly mail boat to hit the big town shopping (Safeway) or see the night lights (the Salty Dawg) in Homer, some five miles across the bay.

Nope, I stay right here in Geri's house, entertaining myself as I see fit.  Once a day I walk around the grounds, which takes about ten minutes.  More if I stop to take photos.  While life in the cove can be quiet and peaceful, it can also be downright adrenalin pumping.

Consider the day the robot ran wild in the house.   Yes, I said robot.  With much trepidation, I removed it from where it was locked down, then punched the on switch.  Suddenly I was heading in the opposite direction as it began spinning and twirling and generally running amok. 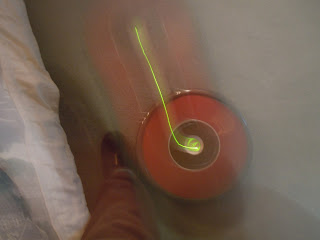 It started after Geri but she was much faster and managed to escape unharmed, or rather un-vacuumed, as the case may be. 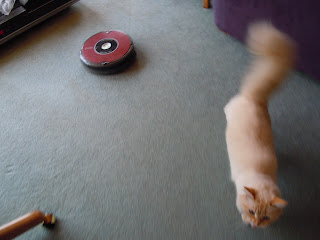 For about a half hour the Roomba robot bounced around the room like a ball in a pinball machine, all the while vacuuming the carpet..  Geri retreated to her chair, where she was not amused when it approached. 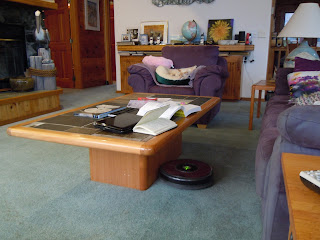 Once I determined the robot wasn't going to rape and pillage or eat my computer cords, I left it alone to do what it wanted.  And then, miracle of miracles, when it tired of its sport, it went home and took a nap.  Docked itself, it did. 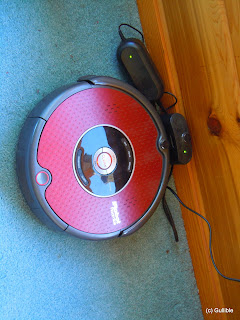 Whew!  I wiped the sweat from my brow.  After all that excitement, I decided a nap was appropriate.

This afternoon the sun came out after a few days of mostly rain.  I went down to the dock on my afternoon rounds, where I peered over the side into the aqua water of the cove.

Then I reached for my camera. 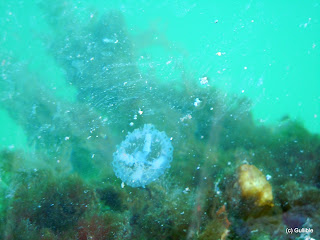 I understand the gals from Moose Pass were out on the town in Seward Friday where The Help opened at the Liberty Theater.  According to a source who shall remain anonymous, the gals went wild--something involving flying popcorn and the Yankees.

Well, Skip and Marie at the Liberty don't  have anything on the cove.  Just look at the exciting movie below, Jellyzilla.  You can click on it to enlarge it and get the full impact of a true drama.

That was exciting!  Now, hold onto your chair.  Here's the worldwide premier of Revenge of Jellyzilla.

I'll tell you, (sniff) those true life adventures get me every time.  Eat your heart out, Steven Spielberg.

By the way, there's a full moon tonight.  I think I'll stay in.  I'll be 70 next month.  Don't think I can handle the excitement of night life in the Cove under a full moon. 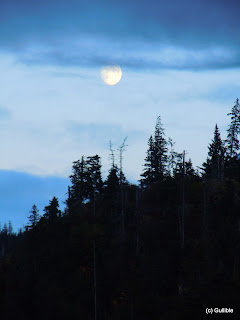