The View from the Back of the Bus, Introduction

(I'll be leaving soon on another trip and have prepared some stories for your enjoyment while I'm gone, just in case I can't get to my blog in Churchill, Canada.  Or don't have time.  Or a polar bear gets me.)
I was in Australia when I learned something that has stood me well on all the travels I’ve done since.  I hesitate to reveal what that is for fear that someday everyone will know and I will have to fight the masses.
If you promise not to tell, I’ll let you in on my secret. 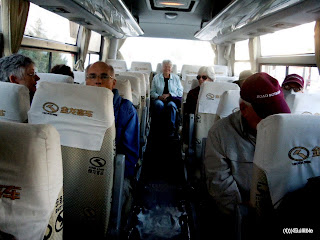 I sit in the very back row of the tour bus.
We were driving back to Melbourne from Phillip Island, specifically from Summerland Beach where we had seen the Little penguins safely from the sea to their inland burrows just after nightfall.  It was a long ride in the dark back to our hotel in the city, and I opted for the empty rear row so I could lie down and nap.
Then, unable to sleep, I sat up and discovered I could see!   I mean, I could see something other than the seat back in front of me and the limited view out the window beside me.  Think of it!  Never in my life have I been able to see what's on the top of the refrigerator, or reach the highest shelves in the kitchen cabinets, or see a parade.

The rear row usually is elevated and that gave me a view over the seat backs and heads of all the passengers.  If I sat right in the middle of the back row, I could see out the front and both sides, scooting from side to side as the photo ops demanded.
I had no seatmate and room for all my stuff.  It was perfect.  I’ve claimed the rear row ever since.
On my trip through China and Tibet, my fellow passengers began calling me “The Empress.”
And then….
One by one, a few joined me for conversation, either sitting in the seat immediately in front of me, or beside me on the rear row.
“Now I see why you like it back here,” they said.
I am going to start posting a series of anecdotes about things I heard and learned while in China and Tibet.  When necessary, because of the political and social constraints there, I will do everything I can think of to disguise the people about whom I write, if I sense they might be subjected to reprisals because of my words. 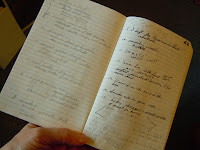 Everyone will be referred to in the masculine gender and given a name I pull out of the air.
My sources:  my fallible memory, my almost indecipherable notes scribbled while riding in bouncing buses, and information imparted to us by various guides—heard by someone with noticable hearing loss who sat in the very back of the bus.  Plus, conversations with citizens and some online research.

Stay tuned, and don’t forget your promise.
Posted by Gullible at 1:00 AM