Making Lemonade behind Bars, Part One


(One of the great things about growing up in Anchorage and Alaska during the mid-twentieth century was that because of the small population, young people had the opportunity to work in positions that usually were filled by older, more experienced workers in more populated places outside of Alaska.   I was one who benefited from that very thing.)

You know the old platitude, “When life hands you lemons, make lemonade?”   Try believing that when you’re facing time behind bars. 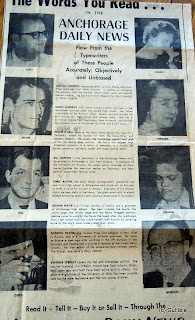 A week out of high school I went to work at the Anchorage Daily News as a summer cub reporter, filling in for vacationing reporters.  The first thing I covered was the police beat.   Those two weeks were exciting and  I enjoyed them immensely.    Then I was assigned to write features, school, and church news until the city reporter went on vacation.  I covered city hall, city council, and school board meetings.  It was okay, but lacked the excitement of the police beat.

In mid-July I had a three-week assignment to cover the court system.  At this time, 1960, the state and federal courts were in the Old Federal Building on Fourth Avenue in downtown Anchorage.  Also housed there were the main post office, the US Marshal’s office, the US Attorney’s Office, as well as a number of other federal offices.  The State District Attorney’s offices were across the street above the Woolworth store, which in a previous life had been the Oyster Loaf café.
Alaska was in its first year of statehood and had launched its own court system just in April.  Here I was, eighteen years old, less than two months out of high school, covering criminal and civil trials in municipal, state, and federal courts.  Never before had I felt so inadequately prepared for anything.

By the end of the second week I hated it and couldn’t wait for the third week of my own “trial” to be over.  In particular, I was dreading Monday—the start of the very first trial of a woman in the new state for first degree murder.

Inevitably, Monday came and I found myself in courtroom “B” of the State Superior Court, sitting on a wooden bench next to the very seasoned reporter from the opposition newspaper.  The first day involved jury selection and I stayed to watch this process as it was new to me.  It was mostly boring and repetitious, the same questions asked over and over.  Eventually I began to see the strategy in which juror the attorneys accepted and which they excused.

The trial began in earnest the next day.  The feeling in that courtroom was intense and deadly serious.  I felt overwhelmed, not for myself, but for how critical a matter this was for those involved−the defendant, the prosecuting and defense attorneys, the judge, and the jurors.  There is no high school civics class that can prepare you for that feeling.

When the state called a certain prosecution witness, it hit me:  I knew these people!   The witness had been my employer during a brief summertime job, and the victim had worked for her also.  I had never met the defendant, but had seen her once at the jobsite.  I was almost sick to my stomach and I’m sure my face went pale when I recognized the witness.  That was a difficult day for me.  It was a slam-dunk introduction to real life.

The last of the testimony and closing arguments consumed the next day, and by Thursday a first degree murder verdict was returned in open court.  It had been many, many years since a jury had brought back a first degree verdict in Alaska.   My story of the verdict was printed under a bright red banner headline on the front page.

I was caught hook, line and sinker.  I had fallen totally in love with the court beat.  I’d met most of the people who worked in the system, called most by their first names.  I was becoming comfortable, getting to know my way around, not so overwhelmed with the responsibility.  Alas, the usual court reporter showed up to take his beat back on Monday morning.

Next I was assigned to an eternity in purgatory on the society pages for a whole month.  Never was anyone so unqualified.  Never had I suffered so much.  I had absolutely no interest in “rounding out my journalism experience.”   I wanted back in my beloved courts!

And it came to pass.  When my time in purgatory finally ended, I was offered a permanent job—and the court beat.  I grabbed it in exultation.

A year later I was right at home.  This is what I was meant to do.  I was learning new things daily, meeting phenomenal people, the builders of this new state.  I knew every lawyer in town, every judge, every prosecutor, all the secretaries and clerks and bailiffs.   Most were on a first name basis.  Only the judges were addressed more formally. 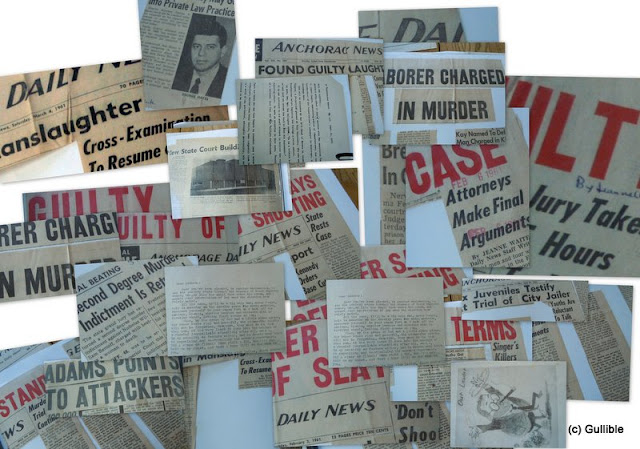 I also had developed a friendly rivalry with my opposite number at the competing paper.  He scooped me on a story one time, an arraignment on a secret indictment that I had missed.  It was a simple thing of not much import, but I vowed it wouldn’t happen again.

Secret indictments were brought by grand juries usually because the suspect was not in custody or under bail.  The defendant’s name was not released to the public until the person was in custody, thus the “secret” nature of the bill.  It was done mostly to prevent the suspect from fleeing.

For us reporters, the problem was that when the defendant was going to be brought into court and formally charged, the matter appeared on the court calendar for the day with no fanfare.  It would be shown only as “State vs. Smith” or whatever the defendant’s name was.  The case could be something quite mundane, or it could be something quite newsworthy.  There was nothing to call attention to the fact that it was an arraignment on a secret indictment.

Therein lay the puzzle.  How to know?  I found a way to find out the names on the secret indictments.  I did nothing improper with the information, never revealed it to anyone, but used it strictly for my own information so I could watch for those particular arraignments.  This went on for well over a year.  Nonetheless, this was a serious matter and would not be taken lightly should anyone in authority ever discover why I was usually the only reporter who showed up at all the “secret” arraignments.


On one fateful day I was approaching the courthouse and was taken aside.  “They know,” I was told quietly.  “The place is in an uproar.  The cops are questioning everyone.”

(to be continued)
Posted by Gullible at 3:01 PM