The Nice Day for a Drive Journals, Ch. 6, Nenana on the Tanana


We need to be rolling along on this road trip we’re making, otherwise you aren’t going to care one whit about the next town we’re going to visit.

Why should you care about it anyway, you ask?   Because any day now, this little settlement that straddles the Parks highway is going to have its annual 15 minutes of fame and someone will be a third of the way to being a millionaire.   Or, maybe a whole bunch of people will become flush enough to pay their property taxes this year, which is what my mother once did.

The town I’m talking about is Nenana.   Blink and you miss it.  Not to worry--the bridge will wake you up.   The bridge is at the juncture of the Nenana and Tanana Rivers.  This is going to get confusing.

There’s something very peculiar about this town.   See this:  Nenana  and Tanana.   They look like they  rhyme, don’t they?   They don’t.  Nenana is pronounced Nee-NAH-nuh.   Tanana is TAH-nuh-naw.

Here’s the tricky part:  Nenana is located on the banks of the Tanana River, mostly.  The other part of it is on the Nenana River.

Early in March of every year, a bunch of cabin-fever-crazed people gather on the Tanana River in Nenana.  Out on the ice of the Tanana River, pockets are cut into the ice and a tripod (which is really a quadropod, but who’s counting?) laid on the ice.   Then, all those crazied people grab hold of ropes and pull until that four-legged tripod (!) is standing upright.   Then they all drink.....hot chocolate, of course, because it's fifty below zero and mighty cold out there.

Then everybody goes home to wait a couple more months.

Along comes spring, the Nenana and Tanana rivers start to thaw, and BINGO!  The ice on the Tanana River “goes out,” moving the tripod downstream which makes the cord tighten and trip the timer and somebody becomes one-third of a millionaire because he happened to buy a ticket and guess the correct time all of the above takes place. 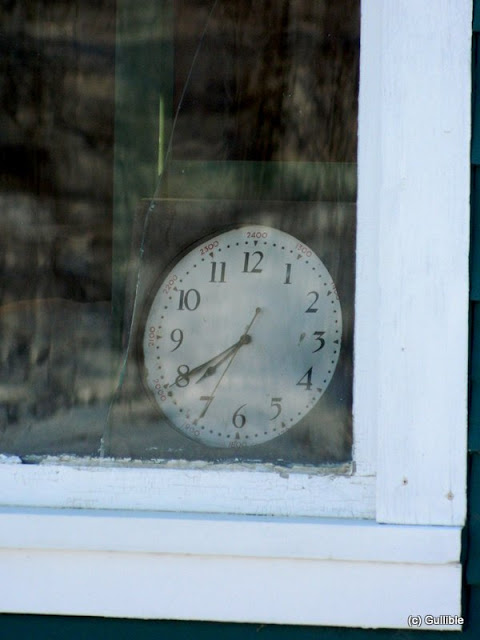 Or not.  Lots of people form pools, and frequently a bunch of people all guess the correct time –to the month, day, hour, minute, and second—and the pot is shared amongst all of them.  Like I mentioned, my mother guessed a time of her birthday and won enough to pay her Anchorage property taxes one year.

Then everyone forgets about Nenana until next March when the crazies come out of winter hibernation and it starts all over again, carrying on a tradition that started, as many things do in Alaska, as a barroom bet. 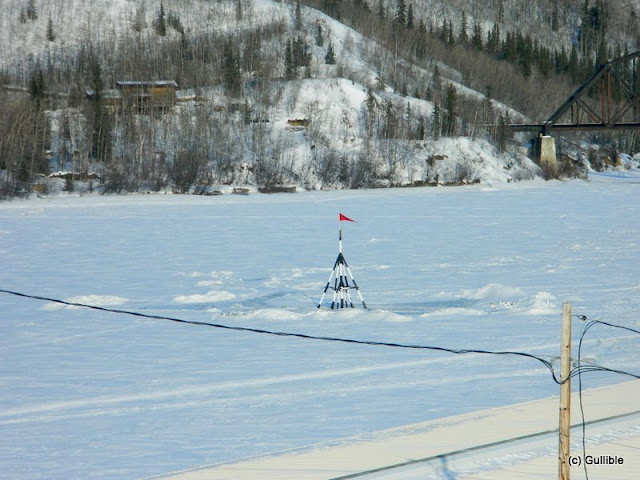 Oh, and here’s one more thing:   It’s called the Nenana Ice Classic, except the ice is the Tanana River, not the Nenana River, which is under the bridge (or across the highway).

At the time I made this original ice trip—late March—the ice was 48 inches thick. 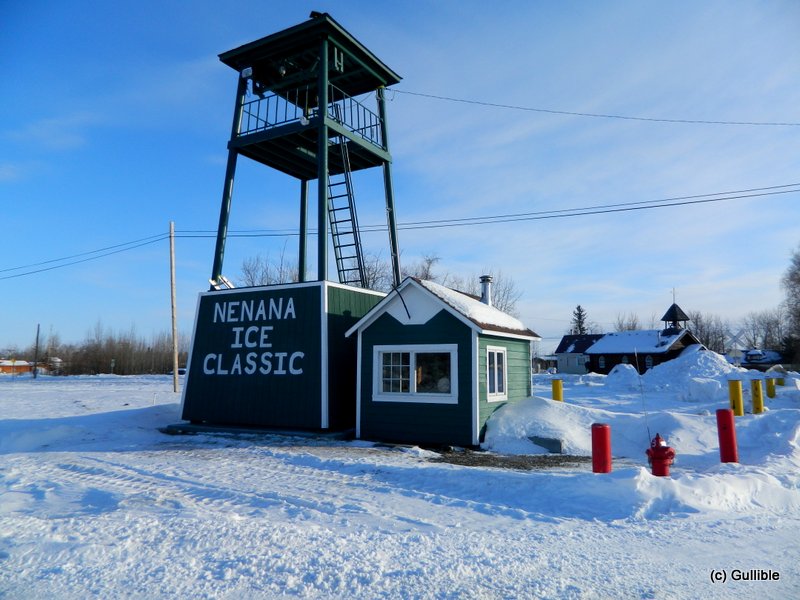 This is from Wikipedia, but it was  written by an Alaskan so it's probably true.  Then again, this is a betting game, so maybe it isn't:

The Ice Classic began as an ice betting pool in 1906 with six entries: Adolph Nelson, Jim Duke, Gunnysack Jack, Jonesy, Louis and Joe Johnson, and the first winner, Oliver Lee.[1] After coming the closest to betting on breakup of the Tanana ice, Lee won an equivalent amount of "a couple of rounds at the trading post bar."[1] The ice pool subsequently became inactive until 1916.[1] In that year, railroad workers revived the betting through ticket sales at Jimmy Duke's Roadhouse, but limited the betting to Nenana residents.[1] After word of the lottery spread to towns along the local railroad by Alaska Railroad Commission workers, the lottery was opened up to residents of the Alaska and Yukon territories in 1917.[1]


And one more thing as we leave Nenana and head north to Fairbanks (which the Tanana River runs through), here's a photo of the sun with sun dogs on each side. 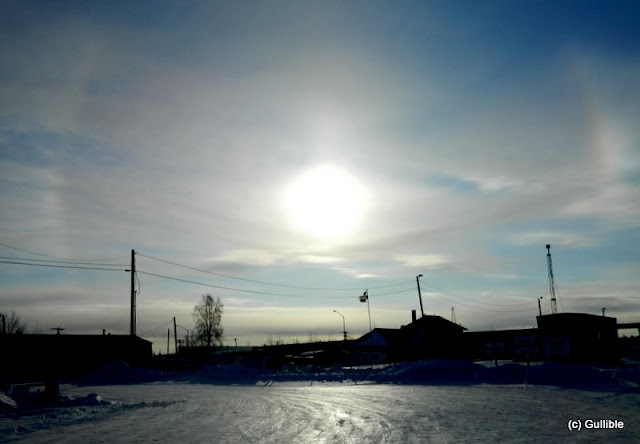