I hurried through my appointed calls that day, thanking my lucky stars there were no trials to keep me in the vicinity.  I headed back to the newspaper office with my stomach in my high-heeled shoes, trying to calm my anxiety and formulate a plan.  I just knew “they” were coming for me soon.

I won’t tell, I promised myself.  I’ll go to jail first and won’t tell.   My reporter’s ethics about not revealing sources were strong, I kept reminding myself.  The whole prospect had me terrified.  I was only nineteen by then, and I was doomed to who knows how long a stretch in jail for contempt of court.  Maybe forever, I thought, because I was not going to tell.

I knew which attorney I’d ask to represent me, to try to keep me out of jail.  I figured the newspaper would have one for me, but I wanted my own, just in case they didn’t hire the best.

I didn’t return to the courthouse after lunch, as was my usual habit.  My editor looked at me questioningly.

“Nothing going on there,” I responded.  I was still trying to figure out how to stay out of jail and didn’t trust myself to not cry.  I was trying to be this seen-it-all, hard-bitten, cynical newspaper reporter and was darned if I’d let them see me cry.  Inside, I was scared to death.  I spent the afternoon in the office, worrying and working on mundane newspaper stuff.  My editor kept eying me, his eyebrows forming question marks.  I kept to myself.

It was a sleep-deprived young reporter who approached the courthouse the next morning, throat dry, stomach clenched, insides threatening to mutiny.

“They’re questioning everyone on the District Attorney’s staff today,” I was told.  “They’re even threatening lie detector tests on the ones they’re already questioned.”

Oh, boy.  I KNEW this was the day I was headed for jail.  I began trying to picture what it would be like, how I would handle it.  I’d heard awful rumors about how tough it was “inside.”   After all, I’d seen the movies, the television shows.

My very vivid and active imagination showed me repeatedly what was going to happen:  “They” would show up at the newspaper office, or worse, snatch me from the courthouse hallway.  If it were the latter, I wouldn’t even have the opportunity of going out in style, head held high, suffering the handcuffs in silence, while my fellow reporters in the newsroom stood respectfully, applauding, urging me to stand firm on my principles, and taking photographs for the special edition of the paper that they were planning.

I would be hauled before the bench of a Superior Court judge (I was hoping it would be Judge Fitzgerald, as he seemed the most likely to be kind), where I would stand respectfully, if mutely, while he asked me to reveal my source.  I would feel my fellow reporters in the gallery silently sending encouraging messages by mental telepathy.  I would then say to the judge, “Your Honor, I respectfully decline to answer.  I cannot reveal a source.”  The gavel would come crashing down, and he would, regretfully and with admiration for my courageous stand, sentence me to an indeterminate time in jail for contempt of court.  The bailiff would meet with no success when he tried to silence the uproar from the gallery…..

All that, of course, was during my stronger moments, which were very few.  Usually I saw myself quaking with fear, perspiring with nausea, leaving town under cover of darkness—except that it was mid-summer in Alaska and there was no darkness.

Preoccupied, staring at the floor, trying to keep a low profile, I rounded a corner in the hallway and ran smack into the attorney I’d decided upon the day before, the one I was hoping would save me from my looming jailhouse fate.  The hallway was deserted except for the two of us, so I told him my problem and said that I might need his help.  I was close to tears by the time I’d finished.

He laughed out loud!  He thought it was hilarious!  I was scared half to death, about to throw up, and here he was tickled silly!   He laughed so hard and for so long that eventually I started laughing, too.  It was somewhat forced, but it was laughter, so when the tears started leaking out, I could blame them on that.  And, somehow, through the laughter, I began to see another way through this, which might have been the intent of his laughter all along.

He gave me his assurances that he would indeed be available should it come to that and he walked away still chortling.   I almost got the feeling he was proud of me.  I returned to the newspaper office and told my editor what was going on, why I was “laying low.”  I saw a sparkle in his eyes—he was proud of me too!

I’d made my decision.  I wasn’t hiding anymore, nor was I taking the easy way out.  I was going to stand right up there and take whatever came my way, because I had realized while standing in that hallway with my attorney friend, who was laughing delightedly, what a great story it would make if I DID go to jail.  “They” wouldn’t dare let anything happen to me in there, not with me filing daily stories from the “inside.”

And, yes, I started to hope it WOULD happen.  I had the ingredients and was planning my batch of lemonade.

And, no, it never did.  They never came for me.  I never got my big story from the inside of a jailhouse.

I also never told anyone how I found out that information.  More than fifty years later, I’m the only one who knows, and I’m still not telling. 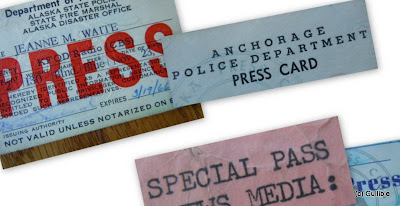 Federal courtroom. Haven't found a photo of any of the state courtrooms yet.   They weren't this elaborate.