The India Journals, Ch. 22, Too Low, Too High, and Somewhere in Between

Ch. 22, Too Low, Too High, and Somewhere in Between

I will lay my bones by the Ganges that India might know there is one who cares.
—Alexander Duff in Passage to the Unreached

Today is our last  full day on the Ganga River.   It’s a "sleep late, pack at leisure, enjoy the scenery" day.  And I am.  The drapes are fully open, the sliding glass doors pushed to their farthest extent.

The sun is making a gung-ho effort to burn through the haze.

I tried the Wi-Fi and got the usual result, which is why I was out of touch the first week of my trip. 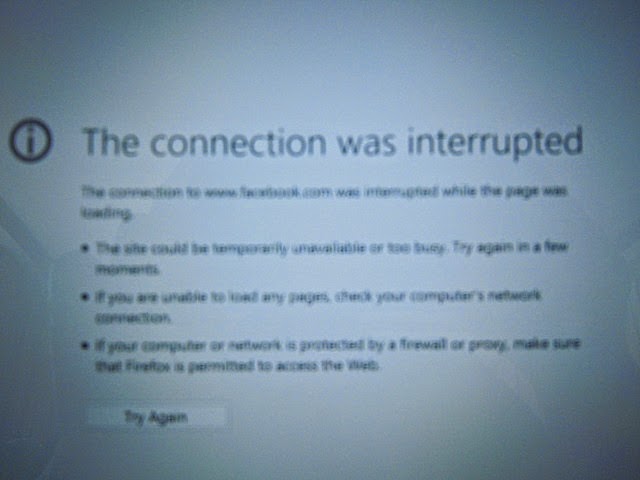 Suddenly, the boat lurches and comes to an abrupt, but gentle stop.   I land on my hands amid the rolls of clothing.  One glass door slides to the closed position while the other bounces against the frame in the open position.  I realize immediately that the boat has run aground.

Judging from the soft stop, I guess it’s a sand bar.   I walk to the French balcony and see a man on the country boat checking things out and signaling to the bridge.


The props are reversed and the boat backs off its comfy resting spot.   Just another day on the Ganga.   Someone should tell the sand harvesters about this spot.   They won’t have to dig so deep.

At 2 o’clock, with the RV Ganges Voyager now off the sand bar and anchored in the middle of the river, we board the country boat for a ride to our final shore excursion.   We unload and are now in the former French Colonial city of Chandannagar. 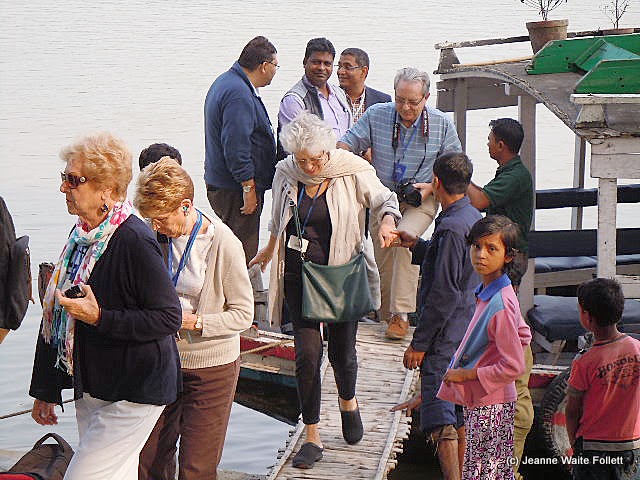 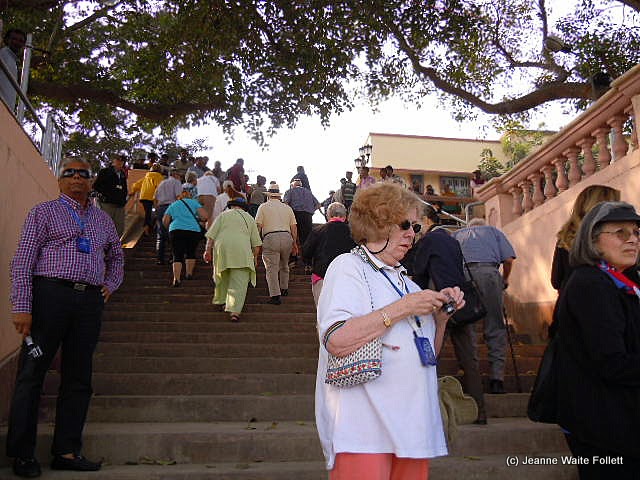 It’s a pretty city.   Lots of trees and shrubbery line the Strand, which is more than a half mile long and 23 feet wide.  Chandannnagar got its start as a French trading post in 1673, with permission of the ruling Nawab of Bengal.   A decade later, it was a permanent French settlement, and became the main center for European trade in Bengal.

Those interminable British/French wars have much to do Chandannagar’s history, during which Kolkata, only 22 miles downriver, supplanted Chandannagar as the leading mercantile center.  India gained its independence from Britain in 1947 and a year later, a vast majority of Chandannager’s population voted to become part of India, and thus it is today.

Our visit to this city began, of course, on the Strand.

A short walk later, we cross the busy street and run into a bevy of golgappe carts.  After many questions during this trip, now Asif finds the perfect place to explain this snack especially loved by Indian women. 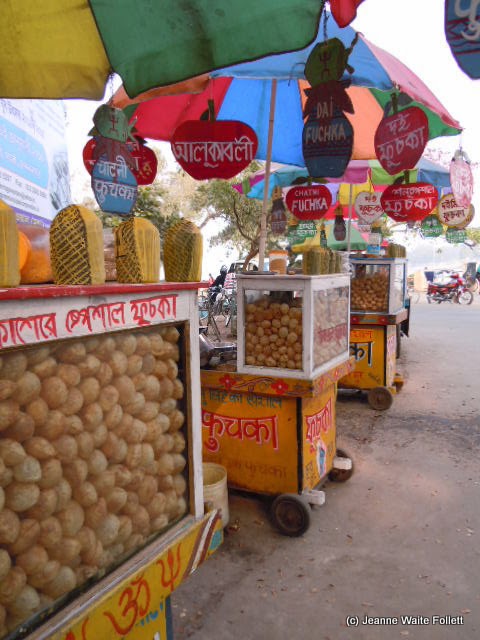 A short distance up the street, we come to the Sacred Heart Church of Chandannagar, a fine example of French architecture. 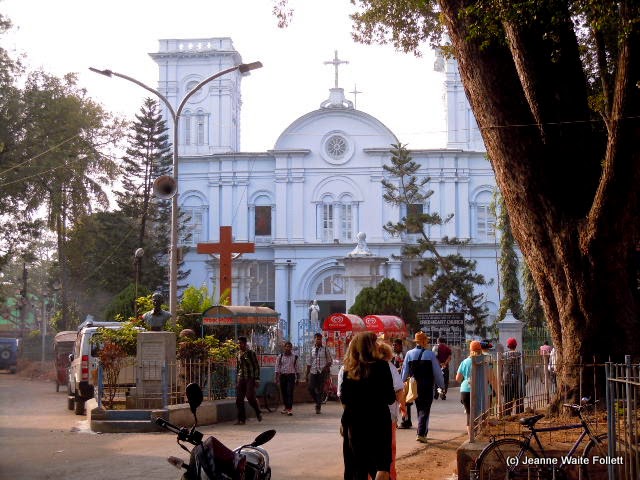 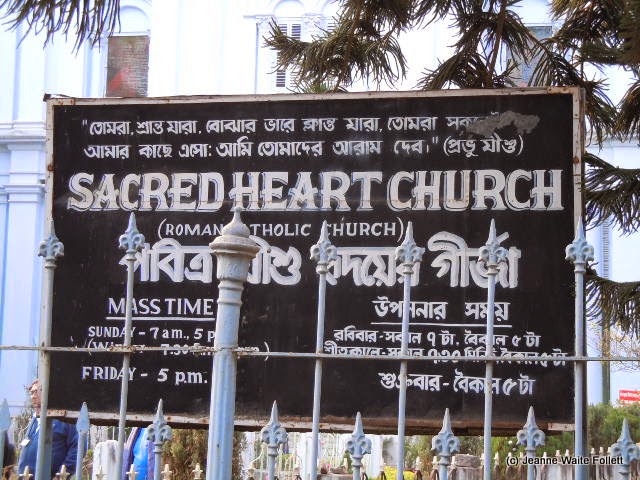 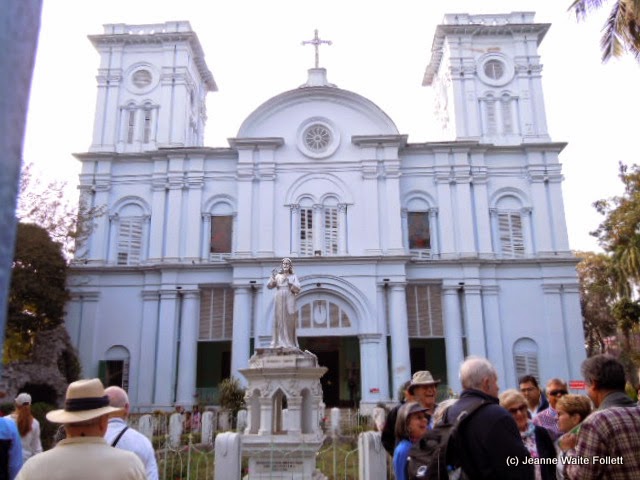 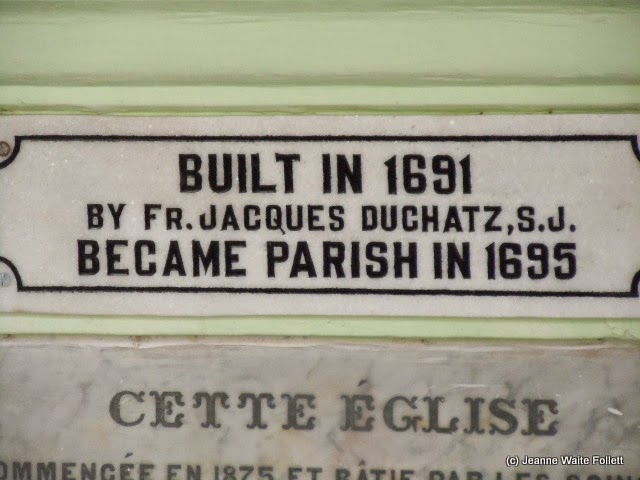 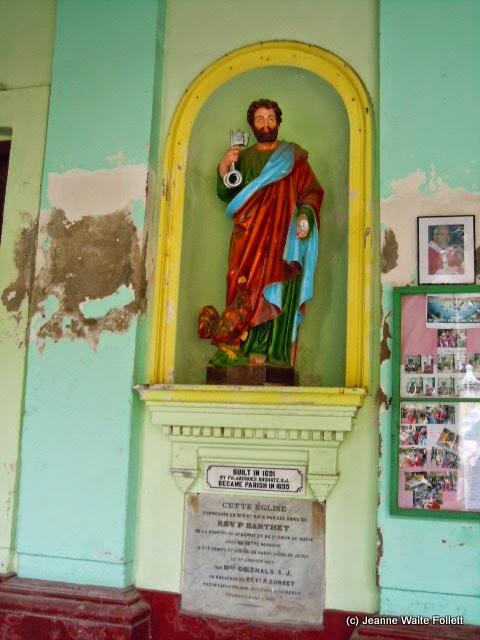 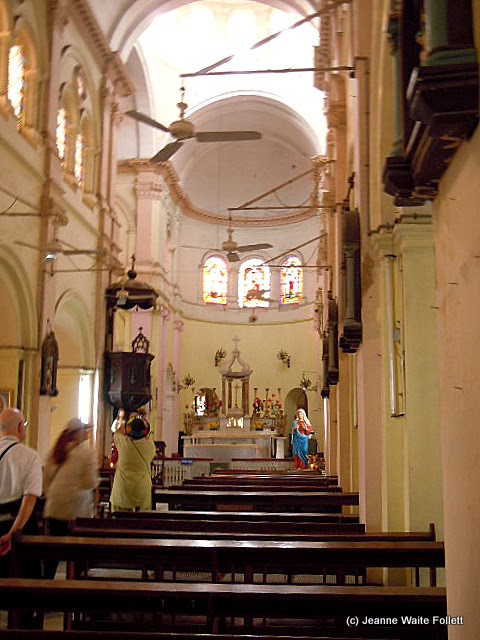 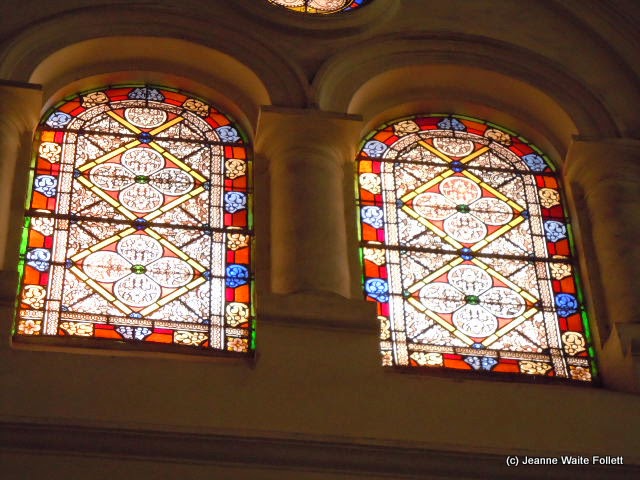 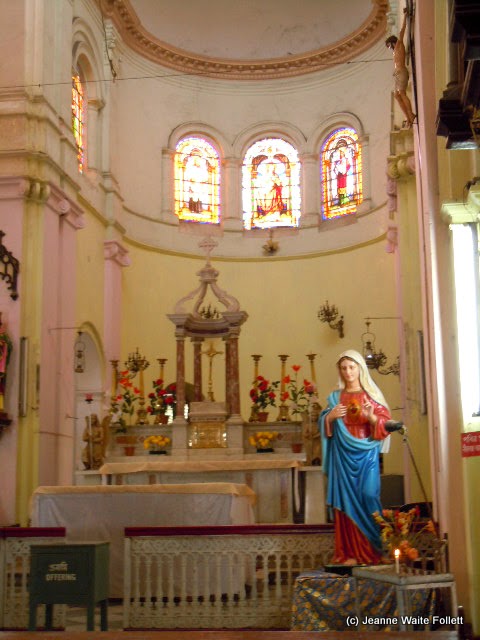 Then it’s up a side street to a school.   Many of the students have been dismissed for the day and parents are waiting to take them home.   I notice one boy being offered some food by a woman presumably his mother, and I realize that this is the first chubby child I have seen so far.  (He is not pictured here.)

Remembering the girls on the Strand, all with cameras and/or cell phones, I think this city is on an economic level higher than the villages I have see thus far. 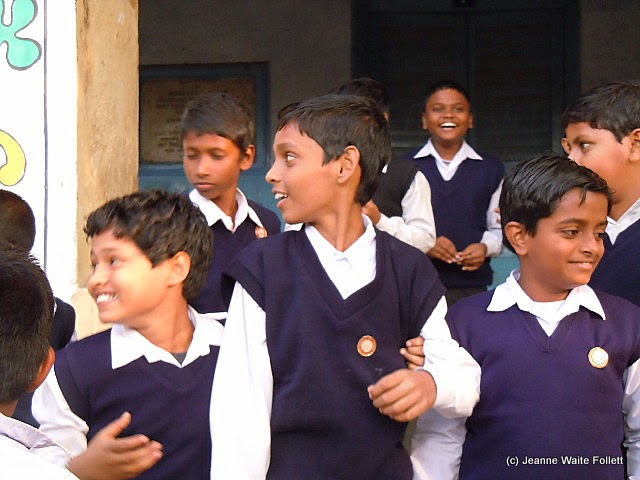 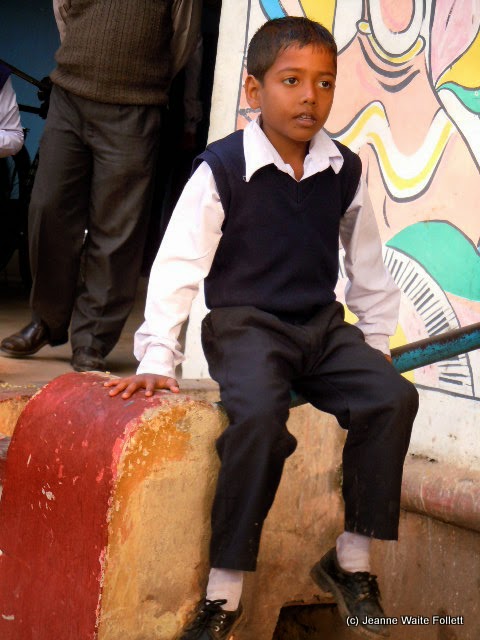 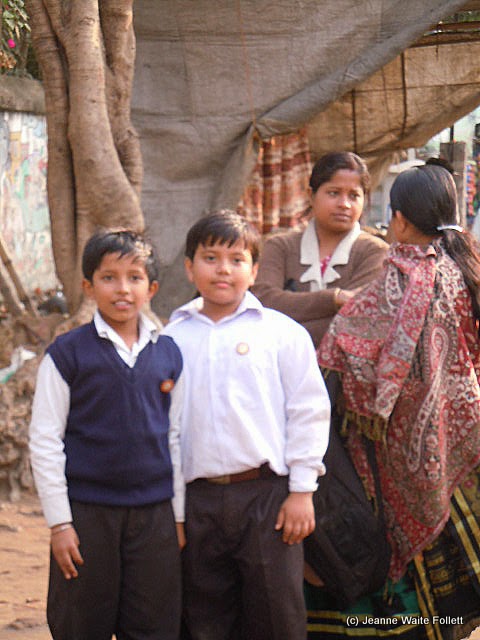 Our visit to the school complete, we reverse course and head back to the Strand and the boat. 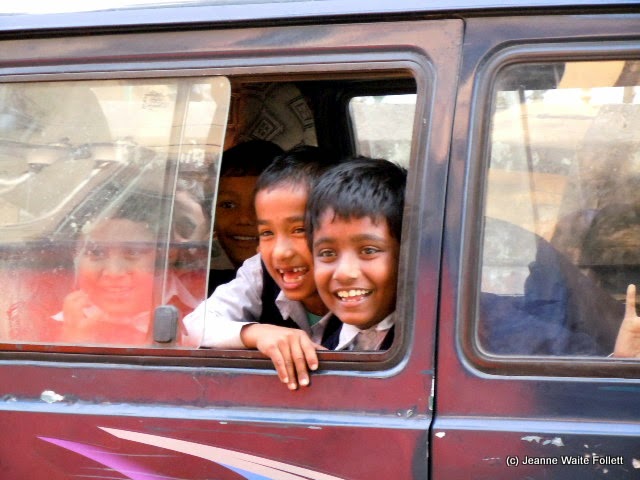 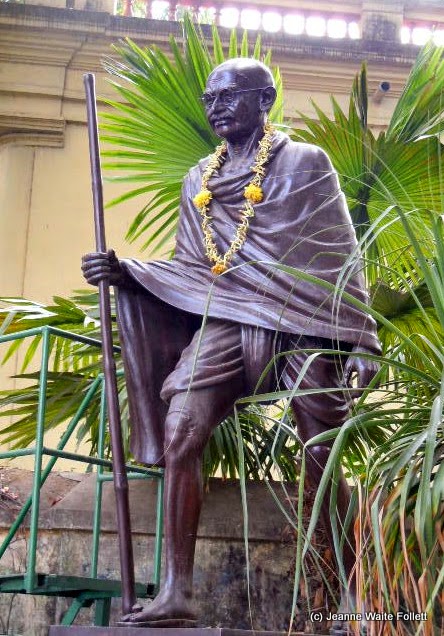 When we get back to the RV Ganges Voyager, I notice we remain anchored.  When I ask why, I’m told the river is too high for us to get under the bridge and we have to wait for the tide to go out. 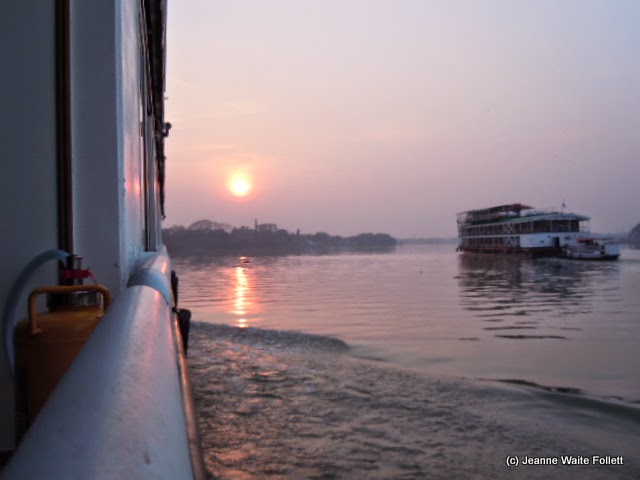 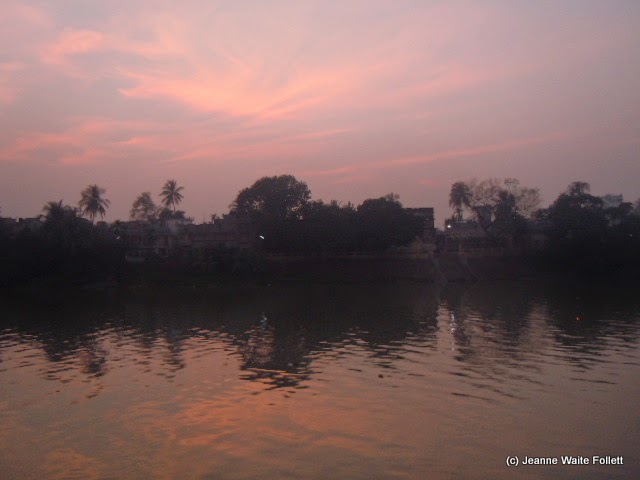 First we run aground and now the river’s too high.   Ah, Ganga.

Not a problem.   We wait, pass beneath the bridge and we’re in Kolkata by dinner time.   We will spend the night on the boat, have our bags out at 5:30 A.M. (not sooner for safety reasons), and leave the ship after an early breakfast.   We have a plane to catch and that requires getting through the incredible traffic of Kolkata first.