I will tell you a truism that I know for certain applies to me: A writer without a muse is a pitiful creature.

That goes for writer-wannabees, too. My muse is so much a part of me, that without her I am lost. I wander through the worlds of words and thoughts without a clue as to where I am. I am so bereft of words I can barely speak. I have no interest in anything short of finding the one whose bounty will sustain my soul.

For the past couple weeks, I have been searching for other reasons for my present state. I am full of trite excuses: It’s the post-holiday doldrums; It’s the mood of the country in light of the economic hardships that we face; I’m at loose ends; I cannot focus; It’s cabin fever.

Or, as I wrote in a piece of poetry the last time this happened:

From whence will come the treasured words
to fill the mind with writing’s fare,
if never do I fathom where
my muse doth hide in secret lair?


As a result, I looked forward to coming to Halibut Cove, where I will spend the next six weeks caretaking the property of long-time friends. They own a large lodge called Stillpoint, or Stillpoint at Halibut Cove. There are no roads to Halibut Cove. The only access is by water or air. During these winter months, as few as a dozen people call this quiet place home. In the summer, several dozen inhabit the area, and hundreds of tourists visit.

This morning I watched Kevin and Bowman aim their skiff at the Stillpoint dock, and noticed the pattern left behind them in the thin skim of ice that covers this sheltered area of the cove. So tranquil is the water and so gentle is the tide right now, that several hours later the crazed crystalline pattern of their journey through the ice is still there, much like a tracked vehicle leaves a permanent mark across the fragile Arctic tundra. 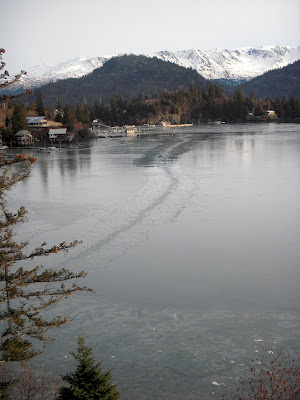 I spoke with them briefly and handed over mail that needs to make Saturday’s mailboat. I am quite isolated here. Keith and Bowman are the first people I’ve seen since my hosts left Sunday morning. The floating post office is located on “The Island,” as everybody here calls it. The Island is what shelters the cove from the waters of Kachemak Bay, which can be as serene as a mill pond or a strong runner-up to the treacherous tempests of Cape Horn. The island is across from where I am staying and unreachable by me unless I beg a ride across the water. 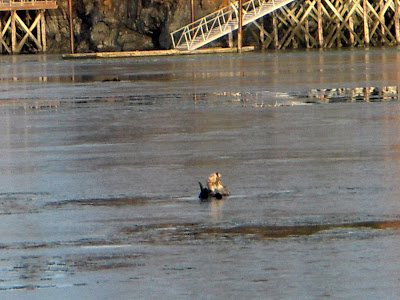 I walked over the ridge to the main dock at Stillpoint, where I checked the twin-hulled boat to make sure the heat was on and the bilge pump worked, and watched a sea otter for a few minutes. Then, I took another route back. Along the way, I passed a new labyrinth that my hosts had built last summer. I walked past it, then turned and went back. 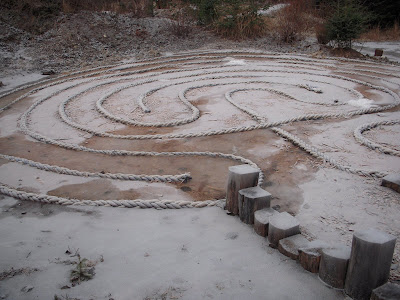 The warm hurricane-force winds that blew through here last week—a meteorological phenomenon known as a “Pineapple Express” because it originates in warm waters far to the south of Alaska—melted all the snow and uncovered the labyrinth. Formed into a circle by thick rope, its path covered in wood shavings, the labyrinth drew me into its midst. I knew little of its purpose, but considering where I was and Stillpoint’s emphasis on spiritual and creative renewal, I had reason to wonder if perhaps I could locate my missing muse by making a journey to the center of the maze.

And so I did. As I walked, I felt my mind become free of thoughts and open to suggestion, rather than pleading with my muse to return. I stood quietly for a few moments after I reached the center, not thinking of anything in particular, but well aware that my writer's antennae were up and running and receiving. Then I left.

Twenty paces up the road I noticed a patch of hoarfrost near the ground in the dead vegetation, and it reminded me of a couple photos I had taken a month ago near my home in Moose Pass. When I had first seen them, I suspected they marked the entrances to underground critter habitats, maybe of snowshoe hares or smaller rodents. They were quite visible because temperatures were below zero and there was no snow on the ground. I thought the warmth of the critters and their exhalations had provided moisture to form hoarfrost. 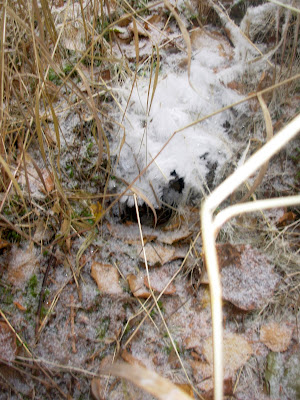 But today—post labyrinth—another thought occurred: perhaps these are the places where the earth breathes. 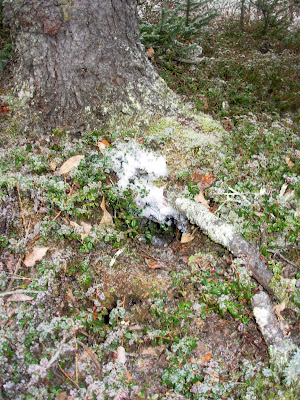 When I returned to the house, I Googled “labyrinth.” In part, this is what Wikipedia had to reveal: “Labyrinths can be thought of as symbolic forms of pilgrimage; people can walk the path, ascending toward…enlightenment… Labyrinths are used…to help achieve a contemplative state. Walking among the turnings, one loses track of direction and of the outside world, and thus quiets his mind. The result is a relaxed mental attitude, free of internal dialog. This is a form of meditation. Many people believe that meditation has health benefits as well as spiritual benefits…”

For the first time since I arrived last Saturday, I am using my computer for something other than Spider Solitaire. It’s a start. Welcome back, muse. I’ve missed you. Stick around a while, won’t you? 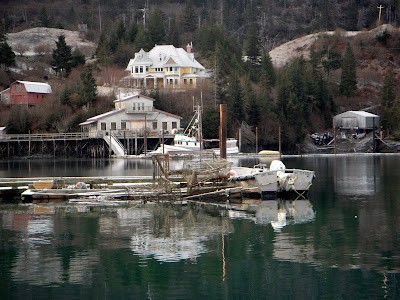