All the latest dirt

Oh, my, dahlings, there is ever-the-most-juicy ruckus going on in Anchorage right now so I’ll attempt to channel one of the Divas of Dirt, Hedda Hopper or Luella Parsons (if you have to ask, well, for gawd’s sakes, then Google them), and bring you all the latest. I do so love this kind of stuff, especially when it doesn’t involve me as its subject.


As Hedda once said, “Nobody’s interested in sweetness and light.”

Well, now, I have it from reliable sources, who shall remain nameless (and un-credited because I want this to appear to be all my very own scoop and not reported on for, like, months by the other media), that the Municipality of Anchorage has taken $560,00 and dumped it into a stack of stainless steel cubes in the plaza of the museum downtown. Now, dearies, before you go buying airplane tickets to Anchorage to scarf up your fair (or unfair) share, I should tell you the dollars are what it cost to have those cubes made and put there. They didn’t literally dump a big ol’ pile of on the street.

This time it’s a stack of stainless steel cubes by world-famous sculptor Antony Gormley. Oh, it's a such a colossus, standing 24 feet high and is meant to evoke a modern Buddha-like image, the artist is rumored to have said. And, I have it on good authority that he wants the piece to “make increasingly city-bound human beings question their relationship to the natural world.” It’s part of the one-percent-for-art program that can make normal people act like raving, frenzied luna….uh, art critics. 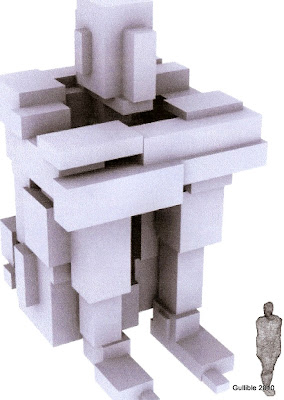 Scale drawing rendition of Habitat by Antony Gormley. I wonder where the reading material is that usually accompanies such a posture, don't you, dahlings?

Now, before you think I’m going to hold myself forth as an esteemed and educated art critic, let me tell you what I know about art:

1. My step-daughter Diane and my friends Kathy and Rosella are very, very good at it. So is a barefoot Aboriginal woman named Audrey Nangarrai who paints while seated on a blanket in the Outback near . Then, there's a glass blower in Jerome, Arizona, who gave me hot flashes. Oh, wait. I remember now--I was sitting too close to the fire. Oh, well. Plus, Mother Nature is an exceptional artiste. 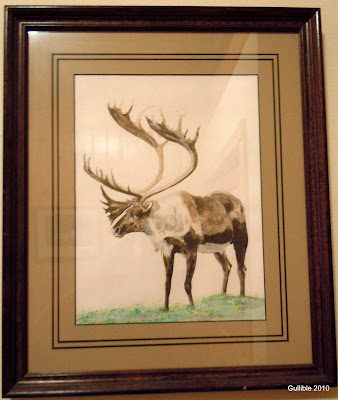 Caribou pen and ink by Diane. 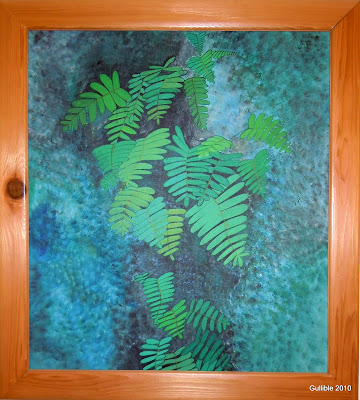 Ferns by Kathy. It was rectangular before the guy using the last of the clear cedar to make a frame goofed up. 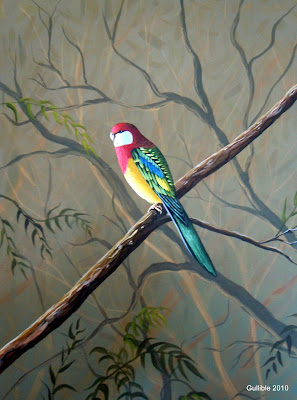 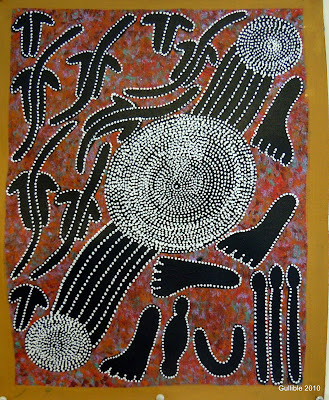 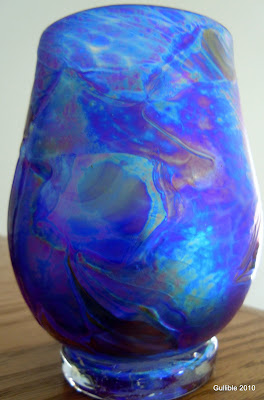 Hand-blown glass vase by an artist in Jerome, AZ.

Mother Nature's bird wing, a piece of tree bark weathered and polished by the ocean. It was in a lot better shape before I thoughtlessly carried it around in a wooden cigar box for years. Many of the "feathers" were knocked off.

2. I’ve seen one of Michaelangelo’s sculptures, though every single one of his sculptures and the ceiling of the Sistine Chapel are on my bucket list. 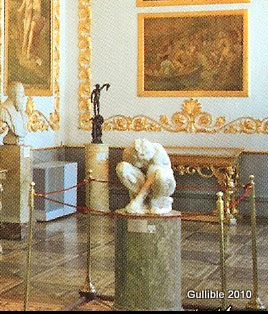 Sculpture by Michaelangelo on display in the Hermitage, St. Petersburg, Russia. Michaelangelo was applying for admission to an art school. The instructors gave him a challenge, thinking he would fail. He was told to sculpt a life-sized person from the small block of granite. He carved a crouching boy.

3. I adore Andrew Wyeth’s Christina’s World, the stark and provoking image of a disabled woman crawling across a field towards a house and barn. I cannot offer a coherent reason why, though. Something about its simplicity of rendering but depth of emotion, I think.

4. I can tell tempera from tempura. 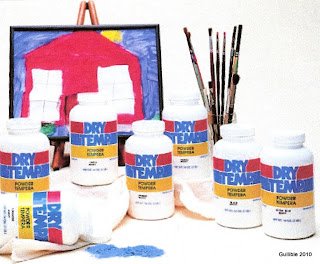 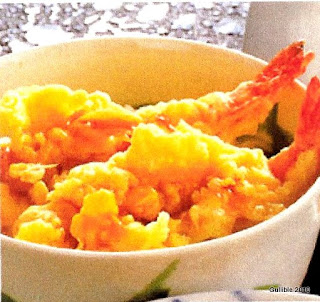 Oh, dearies, you should have heard the dust-up after the one-percent-for-art sculpture was installed at the Sullivan sports arena. It was promptly dubbed the Broken Donut, and had some wags joking about the concessions stands inside. 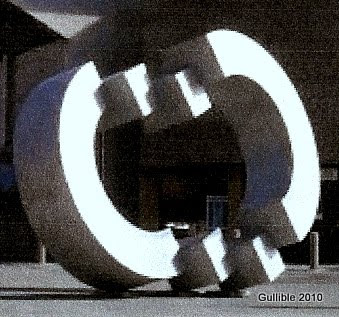 The Broken Donut at the Sullivan Sports Arena.

So now people are screaming about the mega-bucks sculpture called Habitat that was installed last weekend at the , and it has nothing at all to do with Jimmy Carter and carpenter tools or Ty Pennington screaming even though he’s using a megaphone. The museum itself is busy moving all its goodies into its 80,000 square foot expansion—the one that cost $100,000,000 (I had to stop and make sure I had enough zeros there, sweetykins), and was paid for by both public and private funds.

But, dearies, this is the only permanent Gormley work in the I mean, shouldn’t that make just a teeny-weeny bit more sophisticated?

The museum expansion itself is remarkable, if I do say so myself. It’s certainly eye-catching, with its exterior clad in a silver-mirror finish. For someone whose idea of architecture is firmly rooted in the log cabin school of design, this is a remarkable departure from my experience.

It reminds me of another building in mid-town Anchorage that’s nicknamed the Spam Can, because, I kid you not, that one really does look like one—without the paper label, of course.

A few blocks away from the Spam Can is a building that I am absolutely certain houses the offices of the Daily Planet where Clark Kent and Jimmy Olson work, and I suspect Lex Luthor has space in the dungeons, too.

The recently completed expansion at the delighted me no end. It’s almost worth the price of a boarding pass to get through security just to see that art. 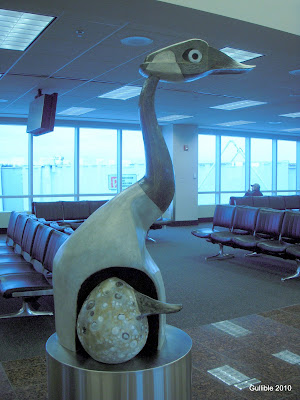 And speaking of former U.S. Senator from Alaska Ted Stevens, he who was retired by those other voters a year and a half ago even though we’d dubbed him Uncle Ted and Senator-for-Life Ted, he had everything to do with gaining Federal Transit Administration funds for a bus stop at the museum. Sidewalks heated to keep them ice-free, brightly illuminated and with state-of-the-art electronic signage showing passengers exactly where their expected bus is at the moment, presumably even if it’s stuck in a snow drift, this is a bus stop worthy of rubbing shoulders with the museum and Habitat.

So what if the bus stop cost $875,000, dears? It’s 72 feet long, nine feet wide, and has reindeer antler images etched into its three glass sides. The semi-enclosed stop won’t be heated, though, because homeless people tend to make themselves at home in heated public places.

Down in Seward at the , there’s an artwork I dearly love, even though it makes me daydream of renting a pressure washer and volunteering my labor. Ah, but such is the fate of things exposed to the soggy elements in coastal towns. I find this piece extraordinarily imaginative, dahlings. Every time I drive past it, I stop in the middle of the street (love those small towns) and look for more critters in its rendering. I see porpoises, ducks, birds, seals, fish, and some I’m still puzzling about. 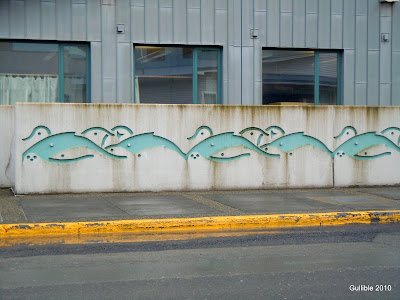 At the Sealife Center in Seward.

Maybe that’s why it continues to draw me back—there’s so much to see in the imagination (not that what I'm reporting here came from my imagination, sweeties). That and the indoor/outdoor exhibit of sea birds where you can watch them on the rocks and in the large pool, then go downstairs and watch those birds “fly” through the water.

Before I sign off for this issue, I want to let you know the isn’t just a collection of old dog sleds and bird feather parkas. No, indeed, because none other than Sue the Dinosaur made a guest appearance there.

But, there’s a fifth thing I know about art that I should mention:

To adapt a partial quote from Associate Justice of the U.S. Supreme Court Potter Stewart: I know it when I see it.

And that is so true because art, like beauty, is in the eye of the beholder.

That’s it for now, dearies.