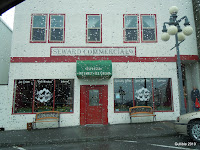 The three windows in Justine’s small and spartan apartment look out on the alley and ugly roofs and backsides of adjacent businesses. You can’t see the water of from here, just the distant mountains at the neck of the bay. You can’t really see much of anything, actually, except through one window, and that is the foot of the steep mountain that rises behind the town.

But this was a group of writers, and we saw these things:

A young boy discovering there’s more to nature hikes with his mom than sharing her M&Ms.

Wishes don’t always come true, even if you make them on a star.

A woman pondering relationships as she deck-hands on her father’s charter fishing boat.

An eternal question: If there are no options, is it really a choice?

An unemployed daughter watching her parents' maid at work, and finding the real meaning of wealth.

And a senior citizen examining parallels between national health care legislation and a Gwich’in Indian fable.


In one sentence each, those were the synopses of the stories we read each other that night. These were works in progress, drafts unnumbered, unfinished stories, tales that needed updating. This was the second meeting of our fledgling group of writers who had taken a class together and decided to maintain the contact and group support. We met at Justine’s, a tiny one room apartment above the coffee shop on Seward's main street. The six of us were getting to know each other now, outside the classroom. 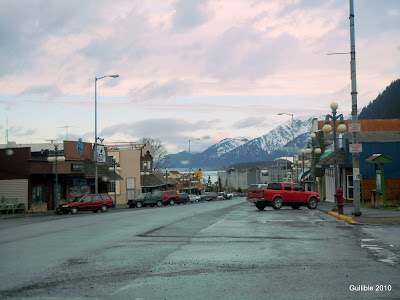 Three sit on the only chairs available, and I share a mini-couch with another. It’s smaller than a bench seat from an automobile. Justine sits on the double bed that’s pushed against the wall.

The mountain outside one window isn’t far away, because the streets that run parallel between the Bay and the mountain are numbered First through Fifth. No room for any more, unless the houses start climbing. I’ve often wondered why the town planners started with Fifth Avenue at the water‘s edge, and went uphill to First Avenue at the foot of the mountain. What then? Minus ?

You wouldn’t particularly be inspired to point a camera out any of the windows, unless one of the many bald eagles in town landed on the rooftop next door.

“We have cloud failure,” says Madeline, who is seated at the table next to one window. We look out over the rooftops in the direction of the neck of the Bay where it empties in the and see a strong band of blue below the rain-swollen clouds that have been here for weeks.

We all make mental notes of “cloud failure” as descriptive writing. 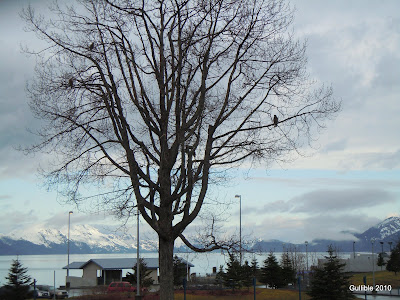 "Cloud failure" at the neck of the bay, with three immature bald eagles in tree.

This was a room full of writers. The view was anything and everything we wanted to make it.