Now that I'm allowed a turn on the computer without AI doing whatever it was doing this morning with its gnashing/clashing gears and blinking yellow light, I'll tell you some of what I've been doing the last few days.

Also, since I already did a post called "That n' That," this one is "These 'n' Those" because I couldn't think of anything else to call it.

IN THE GOOD OL' SUMMERTIME
Oh, yes! Just as I'd hoped. We're skipping spring altogether and going right to summer. First, the violet/green swallows came back to Muskeg Manor on May 1 (Capistrano ain't got nuttin' on us), and now this: 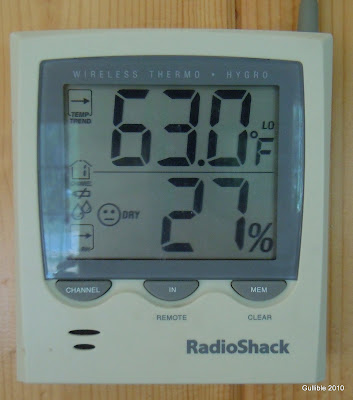 Oh, man, if this keeps up we might have four whole months of summer this year. Assuming, of course, it doesn't snow on the Fourth of July, as it's been known to do.


500 WORDS ON HOW YOU SPENT YOUR SUMMER VACATION
So how have I been spending my summer so far? Spending glorious days out in the fresh air, getting lots of exercise, exposing the winter-puny skin to the elements. Also to the willows, alders, spruce and assorted other scratchy branches out there. Not to mention acquiring a bruise on my forearm that would make a silver dollar look like a quarter. And I have no idea how I got it.

Sometimes I think those scratchy branches are much like mosquitoes--they need fresh blood in order to sprout new growth. Maybe it's my fault, because while I wait for the snow to finish melting north of me, I have chosen positively the worst section of highway to clean up litter.

It's that little four-mile stretch between Moose Pass and Trail River Bridge. I'm not sure it's ever been cleaned, and I'll tell you, the brush hasn't been cut back in at least seventeen generations, and the road is narrow and the shoulders are almost non-existent and the ditches plummet into the River Styx, which, of course, is where the beer cans and jerky wrappers and Gatorade bottles lurk.

This section of road was scheduled to be rebuilt a few years ago, a schedule which is about as reliable as the schedule for the Sterling Highway. Back in '77 when I moved to this area, the highway department was engineering a rebuild through Cooper Landing. It still hasn't been done.

GREEN, GREEN, THE GRASS IS GREEN
On the brighter side, my lawn is in full exposed glory. See below. The gravel part is the airstrip that runs behind my property. 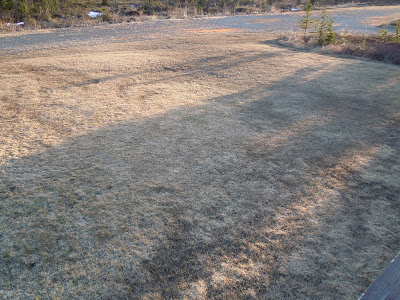 Is that not the lushest, greenest, most velvety lawn in all its Scott's fertilizer-fertilized glory?

2. Imagination \im-'aj-e'-na-shen\ n 1: the act or power of forming a mental image of something not present to the senses or nor previously known or experienced 2: creative ability 3: resourcefulness 4: a mental image a creation of the mind

Do you not see a lush, green, velvety lawn? 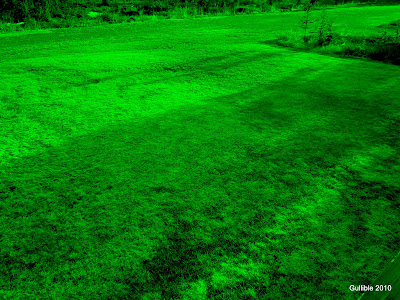 I knew you could do it. My, even the gravel is green.

But, speaking of green, look what I found while picking up litter a couple days ago: 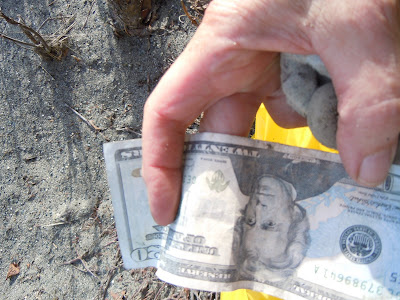 It does so have its rewards. Here's another: 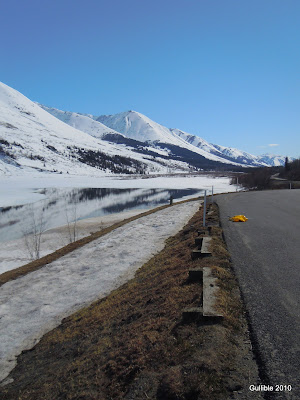 This is where I was working part of the time today, Lower Summit Lake. It's about thirty miles from where I began, and no, I didn't walk all that way. Thing is, I broke my pick-em-up-stick and had to make an emergency run to the Silvertip shop for another, which put me on a section of the highway the tourii pay mega-bucks to see. Yes, the snow does melt eventually.


YOU WILL BE TESTED
Ah, but scratches and bruises aside, I do it because I love it. And, I love the exercise. Plus, I'm going hiking in the Grand Canyon this November with an Exploritas tour. I'm told there will be "agility" tests first, apparently designed to weed out the wimps among us.

People, I do NOT want to be the one the guide takes aside and diplomatically suggests would be ever so much more comfortable back at the motel with a hot toddy and her needlepoint. I don't do needlepoint for one thing. I get cross looking a needle in the eye.

(Ever been on that ride at Disneyland? The song will give you nightmares for years afterward.)
Little-seen marvels. I have no idea what this is, perhaps some kind of tree bark fungus, but it reminded me of a Lilliputian habitat, and gave me a chance to use the macro function. 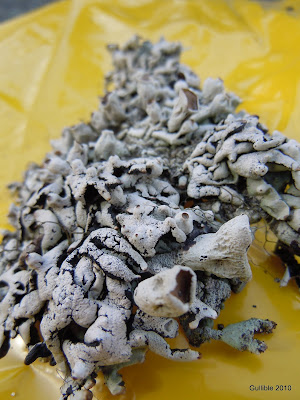 IT LIVES. INCREDIBLE!
I see my most prolific litterer, the Corona drinker, is still alive, despite what he/she is doing to his/her liver.

Of all the beer drinkers in all the world, you have to live in my section of the highway. I see you've gone to the mega-size bottles. Tear your rotator cuff throwing the others out the window? Hoping to give your pitchin' arm a break? Here's lookin' for ya, kid. I'll catch you one of these days. Just toss it again, Sam.... 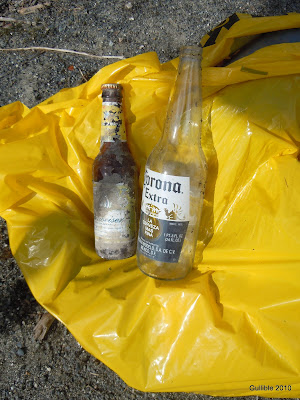 Compared with the standard beer bottle.

SHIVER ME TIMBERS
MYSTERIOUSER AND MYSTERIOUSER VERSION
Oh, yeah. The quivering bed. I first noticed it a couple years ago. My bed quivers at night. It woke me so many times last night, I finally got up at 4 a.m., turned the thermostat completely off and opened a blind to see if the boiler was running (looking for the exhaust). It was not, and it isn't really a boiler anyway.

I have in-floor radiant heat. The thing that heats my house is a large hot water maker, not a boiler, though I call it that for simplicity's sake. Anyway, it heats water with propane, and the hot water runs through all these plastic tubes fastened under the flooring, thereby heating the house.

The hot water maker (hereinafter called "boiler") is mounted on a solid concrete slab. In fact, my bedroom is the next floor above that concrete slab. The boiler was not running. The pumps for the in-floor heat were not running. There are no appliances on the bedroom level. There was nothing operating that would make the house quiver. I know we have a lot of earthquakes up here, but this quivering thing is ridiculous.

The past two mornings, I've had a touch of vertigo upon waking. Okay, more than a touch. A really annoying touch that required the proper medication. I'm not sure the two things--the quivering and the vertigo--are related.

'Tis a mystery. One I'm getting really, really tired of.

If this post seems a little....shall we say, frenetic, let me paraphrase Robert Service: There are strange things done under the Midnight Sun, by the people exposed to its rays....
Posted by Gullible at 9:27 PM