Why on earth would anyone go to the surfing capital of if that person can’t even swim, much less surf?

Why on earth would anyone go to one of the greatest steelhead and salmon fishing sites in if that person isn’t taking fishing tackle?

Why on earth would anyone go to a place that averages 145 inches of rain a year if that person lives in a place where she doesn’t see direct sunlight for three months of the year?

And, last, why would anyone go to a place where huge brown bears live when that person has a huge, profound, totally ingrained, healthy and unhealthy fear of bears?

Because the phone rang the other day and someone invited me to go. That’s why.

And it has ever-so-much possibility for adventure. That’s also why I’m scurrying around trying to locate the things I’ll need. Things like bear spray, mosquito headnet, hip boots AND chest waders, and so on. Doesn’t that sound like a fun camping trip?

So, when I could find neither my bear spray (and trust me, it doesn’t have anything to do with styling a bear’s hair) nor my net that covers my whole head to keep out mosquitoes and black flies, both of which bite, I headed off to Seward to replenish the supply.

All my gear is spread out on the dining room table and I’m hoping it’ll fit in my backpack. The hip boots and chest waders and Personal Flotation Device will go in a tote rather than the backpack. I’m taking wimpy rain gear and serious macho rain gear. Already I feel like I’m going for a month rather than eight days.

Here’s the deal: I’ll board the state ferry Kennicott at midnight in , which is accessed by driving through the longest tunnel in the world that is shared with a railroad. I’ll tell you about that later.

Twenty-two hours later, after the ferry crosses the , we disembark in a little town called Yakutat, pop. about 500. If you look at a map of , Yakutat is on that eensy bitty strip of land that connects the main portion of to .

We get in late, so probably the next day we’ll climb in a Beaver (it’s an airplane), fly up the bay, and land on a beach. Then we have to cross a stream and hike a quarter mile to our reserved cabin, which is a National Park service public use cabin. And my friend J.J. and I will be all alone out there--except for the bears.

All of this is in the Wrangell-St. Elias National Park, a 13 million acre park where three mountain ranges meet. I’ll tell you all about that later, too. With pictures.

But here’s the thing: in order to get to Yakutat, we have to cross the . I’ve been motion sickness-free for several years now, but if this isn’t tempting the gods of mal de mer, I don’t know what more I could do.

I’ll leave you with some links and some photos near Yakutat:

A link to a surfing pix:

In the meantime, some photos I took on my way home from Seward today. 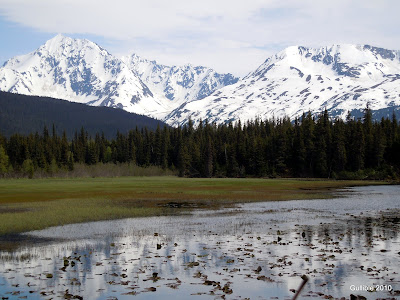 In a week or two, this pond will be covered with yellow-blooming lily pads. 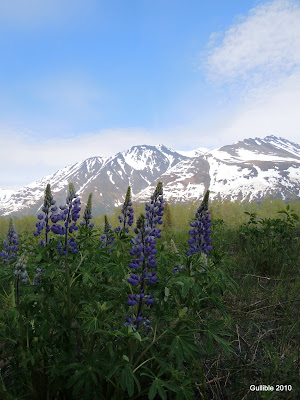 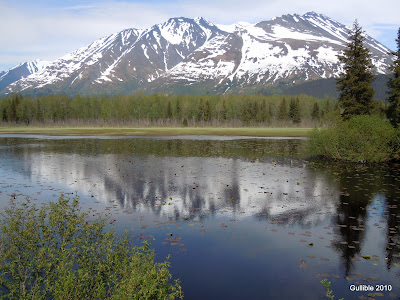 PS: not a word to Pablo, okay? He's getting suspicious, but hasn't yet caught on to the fact that he and the parrot sitter will be spending time together.