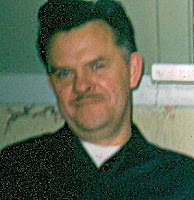 My dad was a nice guy.

Quiet, hard-working, funny in a roll-your-eyes-and-groan kind of way, he had eyebrows that ratcheted up in proportion to the outlandishness of the tale he was telling--and telling with a straight face.

He could keep the straight face, all right. What he couldn't control were the eyebrows and the twinkle in his eyes when he was telling a whopper. That was my dad.

One of my most indelible memories of him was in the summer of 1948, a couple months after we'd moved to Anchorage, Alaska. I was six years old. Dad and I were walking along Fourth Avenue, which is the main street. I have no idea why it was just the two of us, but there we were, strolling along the concrete walk in the sunshine.

Dad would say "Hello" to everyone who approached. Sometimes he called the person by name; sometimes not.

After we passed, I'd ask who that was. He always gave me a name.

I was utterly amazed that my dad had met and knew so many people during the short time we'd been in Alaska. He seemed to know everyone and everyone was his friend because everyone spoke to him.

I was pretty impressed for a six year old because, gosh, there were almost thirty thousand people living in Anchorage then.

Not until many, many years later did it occur to me that that's the way Alaska was. You said "hello" to everybody. It also dawned on me that Dad might have been making up names for some of them. I guess I should have been watching his eyebrows, but, I didn't know about that tell then so I was in awe of my dad.

Nonetheless, as friendly as he was, no one pushed my dad around.

And I do mean no one. Especially when he was all likkered-up..... 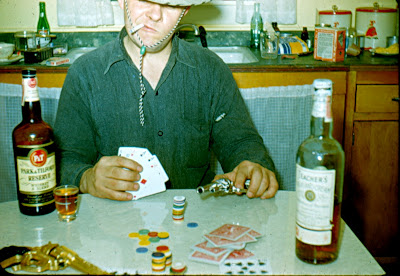