Some people know at an early age what path they will take in life. They know if they want to be doctors or lawyers or commercial fishermen, say.

Some people, like me, wander around doing a bit of everything and never do find out which path was meant for them.

And some people, like my little brother in particular, should have known at a very early age which path was marked for him. But, no, he got a bachelor's degree in geology, then had a full career in the military, then worked another full career for a military defense contractor.

Finally his elder son Joel pointed him in the right direction.

That's when he started a third career with his wife and Joel. They own and operate CAVU winery in Walla Walla, Washington. The son, Joel, is the vintner and has produced several award-winning wines.

(Here's where to find an earlier post about CAVU--http://gullible-gulliblestravels.blogspot.com/2009/05/ceiling-and-visibility-unlimited.html. I don't know how to make that an active link, so you'll have to copy and paste. But, there is an actiive link over on the right side, under Come Visit my Family.)

My brother Jim is delighting (I'm told) in holding forth in the tasting room, chatting it up with wine tasters about bouquet and aroma and blending and the subtleties of this grape and that grape. 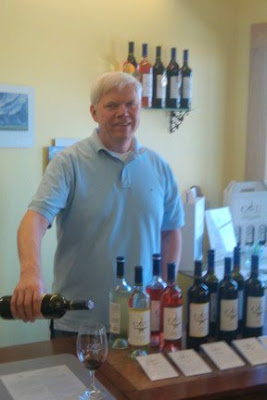 That's Jim pouring in the tasting room. See that rose'? OMG!!!
Well, I could have told you several decades ago which path he should follow, had he asked, although I do seem to recall leading him down the road to ROTC when he was in college. But back to his present career.

I mean, anyone would have known.

Anyone (him in particular) SHOULD have known: 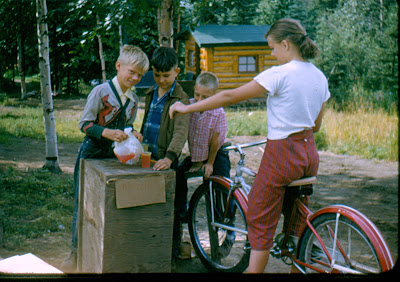 That's my little brother pouring KoolAde, shown with cousin Don, neighbor kid, and me. He even charged me!! Probably double--and I probably deserved it.