Heartache came into my small community recently, came in and walloped the bejesus out of us. Its cold fingers reached from one person to the next, squeezing so hard the tears came directly from our hearts.

The unspeakable, unthinkable rumor crept from one person to another, unlike the way other kinds of rumors fly with the speed of light. One feared to mention this one, as if by not saying it aloud, it we could deny it veracity: one of our own was lost in a distant land. Lost in the violence of warfare, lost while working to protect his fellow Marines.

No, I thought. Not Chris. Not that darling young lad with the sprinkling of freckles and the wonderful smile. No. Not him.

I didn’t want to watch the TV news that evening but I was compelled. I started offering deals. If it isn’t on the news, it isn’t real. If it isn’t on the news, it’s a mistake—a bad rumor. Maybe he’s only hurt—that would be bad enough. Maybe they got the name wrong—maybe it’s someone else—oh, no, I can’t go there, can’t trade one of our own for someone else’s own, but ohmygod the temptation was mighty.

Yet, there it was on the five and six o’clock news. The 28-year-old son of my good friend, killed in a bomb explosion, apparently detonated by remote control as he was approaching to dismantle it.

The next morning. A large photograph on the front page of the newspaper. Dover AFB, . Soldiers carrying a flag-shrouded casket down the ramp of a large airplane. I was offended, not by the photo, but by the words in the cutline: “…the remains of…”

Those aren’t remains, I fumed. That’s the sunny lad who, with his brothers, shoveled snow off my roof and those of many others after a heavy storm. That’s Chris. Not “remains”. The horrid irony is that I had written similar words when I was a practicing journalist. But, it’s different when it’s one of your own.

I ache for his mother, my good friend. I ache for this woman who had raised her own and several foster children, and when they were grown, had adopted four young boys, one of whom was Chris. She, a single mother, taught them honesty and a hard work ethic by example.

Chris had pledged his service to the Marines while still in high school. A good student, a good athlete, a good kid, he knew his path at a young age.

I ache for his young wife and his toddler daughter. I ache for the unborn baby in its last trimester that will never know it dad.

It’s different now, when it’s one of your own. My heart cries, “Get out of there—get out now!” Yet, I wonder if such a plea disrespects Chris and his fellow soldiers and their sacrifices.

The American flag still flies from my balcony, but not at half staff. That would be impossible with a four-foot high flag on a five foot staff. No, this flag flies in all its red, white and blue glory for Chris. For Chris the lad, Chris the son, Chris the man, Chris the husband, Chris the father, Chris the friend, Chris the Marine. 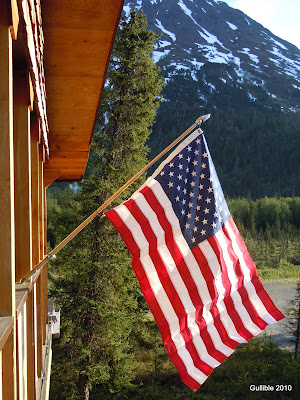