It's Safe! Come on Down!

Gosh, I was ever so pleased to hear the First Vacationers tell the world the water in the Gulf of Mexico is safe, the beaches are safe, the seafood is safe, I’m safe, you’re safe, everybody’s safe-safe.

I was driving along the highway when I heard how safe we all are, and suddenly my cranial Rolodex started flipping madly back through the years, and sure ‘nuff, there it was—another government official telling us everyone is safe, safe, safe.

Saturday was a sun-sparkled miracle, a perfect day for running my dog team. I loaded them up in the truck and drove twelve miles to the far end of the railroad siding. Harnesses on, neck and tug lines snapped, and we were off. Along the railroad siding we flew.

Shortly before hitting the trail at the end of the siding, we passed a railroad tank car that was parked on the siding. I noticed some vapor coming from the top, but since it was such a warm day, I figured it might be a pressure relief vent. There was an odor in the air that I recognized but couldn’t put a name to.

No matter then as my fresh team flashed by the tank car and down the trail to the lake. A couple hours later we returned, passing the tank car. It was still venting whatever it was, which I thought odd because it was now late afternoon, the sun was down behind the mountain ridge, and the temperature had dropped substantially.

I mentioned it at a gathering of neighbors that evening, but nobody seemed concerned. Must be okay, we all thought.

Sunday wasn’t as nice—overcast and cool. I was taking my stepdaughter for a ride today, along the same trail. When we passed the tank car, she commented on the plume of steam rising from it. It was venting even more on this cold day. I glanced to my right and saw Monte coming towards us with her dog team.

Suddenly her dogs stopped and refused to go any farther. We were ripping past the tank car, close enough to lean over and touch it if we wanted, and the last I saw of Monte that day, she was fussing with her dogs trying to get them to go.

Two and a half hours after we returned from our run, all hell broke loose. That tank car erupted in a volcano of vapor, vomiting a blanket of thick white mist over that drifted south towards Seward. A State Trooper named Rod, a good friend of ours, went door to door urging people to evacuate. Some did; some didn’t.

Whatever the stuff was, it smelled bad but didn’t seem to be doing any immediate harm.

Turns out, it was harmful. The tank car was full of formaldehyde, destined for a fertilizer plant down the peninsula. This being winter, while the tank car was still in the railroad terminal yards in Anchorage, it was hooked up to a steam heating system that warmed the contents. Trouble was, it was warmed twice accidentally and the over-heating caused a chemical reaction. It morphed into several known injurious and/or cancer-causing components.

The railroad got the thing out of and left it at the siding. The noxious vapor saturated homes in the and Lawing area, and drifted as far as Seward, twenty-five miles away. Then the railroad towed it farther north into uninhabited mountains and left it at a remote siding until it cooled off. The odor, though, reached Moose Pass.

Then ensued months and months of dither-dather with the various businesses and agencies involved in the whole mess. The chemical company that originally shipped it said it wasn’t harmful. Then they said, “Stay the hell away from it.”

Those of us who lived here couldn’t get a straight story because no one knew exactly what was going on inside that witch's cauldron. It even took a while before the railroad fessed up to heating it twice. I suspect they were awfully glad they’d gotten the thing out of downtown before it began to spew its mystery mix there.

Long story short, teams arrived in with huge heaters, meant for super-heating homes to burn off the chemicals. Then guys with Rainbow vacuum cleaners went in, vacuuming and wiping everything.

After that, they said at a town meeting in the elementary school gymnasium, "It’s safe." Your homes are safe, the air is safe, your stuff is safe, I’m safe, you’re safe, everybody’s safe- safe. Come on down!

Then why, we asked, are the dudes doing the heating and vacuuming and wiping wearing space suits and breathing masks? 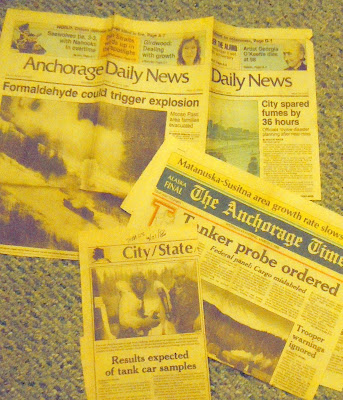 Click once or twice to enlarge the photo. Upper left article shows tanker car spewing its noxious vapor. Lower left shows guy in anti-contamination suit and breathing device. Upper right notes how close Anchorage came to having this problem in its front yard.

Some folks became so sensitized to anything with formaldehyde in it—new carpet, new upholstery, auto interiors, plywood, paneling, etc.—they had to leave permanently. Some developed rashes, some had streaks on their lungs in X-rays, some claimed they weren’t affected. Many had to destroy all clothing, papers, photos, books, etc. Anything porous that the formaldehyde could attach to.

The trooper who warned everyone that first night was vilified by the then mayor of Seward, who claimed the cop was crying “the sky is falling.” We all considered him a hero. Still do. He’s retired from the force and has multiple medical problems because of that spill.

As for me, I worked in Seward for about three months that spring, driving through the area twice a day, five or six days a week. I began having ear infections for the first time in my life.

As the years went by, medical claims were settled one way or another. Some had insurance for life because of it. We lost a few good neighbors who could no longer live there. Nowadays, you’d never know anything had happened.

The company that hauled formaldehyde from the siding to the fertilizer plant a hundred miles away hired a guy named John to drive the truck when the shipments resumed. We called him Formaldehyde John and he took it with good humor. He lived here quite a few years before moving to Louisiana. He’s still a good friend.

Lots of folks from around here worked on the clean-up after the Exxon Valdez belched oil into . Some had breathing problems afterward.

Some years back I noticed a trend. Down the road in that area where formaldehyde had been transported for years, there seemed to be an abnormal number of cancer cases compared with proper. I wrote down all the names of those stricken with cancer that I’d heard of over the years. The result was about fifteen from that area to one in Moose Pass, and that one was someone who traveled through there frequently. Not saying it’s the chemical or any other environmental cause for so many cases of cancer in an area of low population. Just weird, that’s all.

Anyway, whenever I hear someone—even the First Vacationers— tell me I’m safe, go ahead and move back into your home, or swim in the ocean, or eat the seafood, because it’s really all quite safe, I still wonder about those clean-up guys all decked out with their anti-contamination suits and breathing devices.