(Note: Photos aren't enlarging as they usually do, so I've added cut lines beneath most. Also, these pix are considerably fuzzier than the originals, and I know not why.)

(Reminder: click on images once or twice to enlarge.) 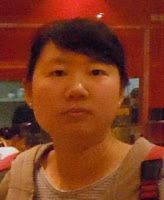 Early in our first days in Beijing, our Road Scholar guide Hui briefs us on what’s to come in this 22-day tour. She mentions the attractions in Beijing, then goes on to other cities we’ll visit.

She talks about health concerns, advises us not to eat from street-side stands, not to drink tap water, and to wash our hands frequently. “If you get sick,” she says, “you cannot go to Tibet.” That got our attention as most of us signed up for this specific tour because we were eager to visit that remote and enigmatic country. A couple weeks later, after Tibet, after cities in the countryside and while we’re cruising on the Yangtze River, which I consider the perfect spot for miniscule bats to live and attack in unseen flights of death-on-leathery-wings, one of our group asks when we get to the place where the bats are.

A look of utter confusion is on Hui’s face. Others add snippets of her early warning to prod her memory: “The tiny bats you said have caused fifty deaths this year.” “Bugs!” she cries and her face lights up with understanding. “Bugs! Not bats.” We all breathe sighs of great relief and laugh about a threat transmogrified in translation.


We’ve all seen them, the included instructions translated from a different language that bear little resemblance to English as spoken by Americans. China was flush with them, but most of the time I could figure out the meanings.

"Induction tap,” for instance, was a water faucet in the restroom of an airport. The question was why it needed to be labeled in the first place. 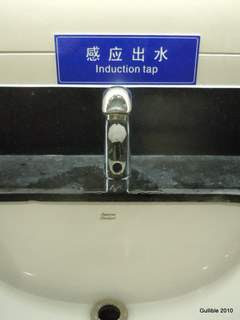 Then this sign written on the wall of a closed outdoor shop: 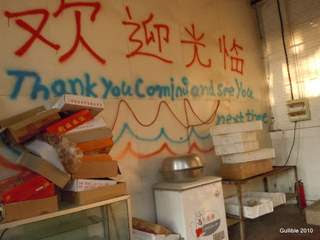 Thank you for coming and see you next time


There was no question about this one: And maybe FDA would raise a figurative eyebrow at this on a Red Bull can: 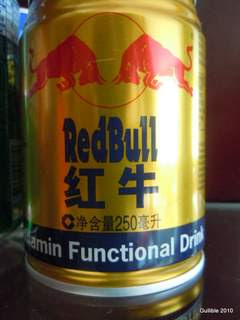 
I could guess what this meant, though I had to ask to verify it: It meant, no refund if you bring your own shopping bag.

No one needed a better translation to figure out what this menu item could produce: 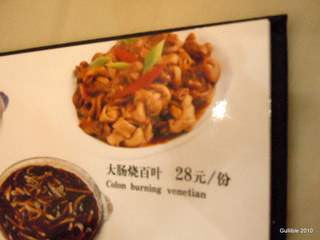 Colon burning venetian
But these items were wide open to the imagination: We all knew what this label was even though it’s written in Chinese: 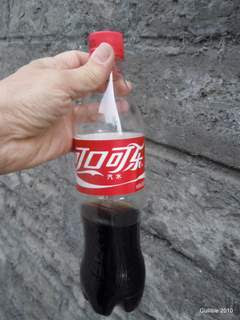 This tee shirt was for sale in a Muslim marketplace.


This translation, signing the way to handicapped facilities in an airport restroom, left me wondering how the translator came up with those words: But then there was the winner. If you’ve ever stayed in a hotel, you’ve seen them, but probably didn’t pay much attention. More than likely you never read that emergency evacuation sign mounted on the inside of the door.

Miles and miles from Beijing, in a middle-aged dowager of a hotel, this sign got my attention: 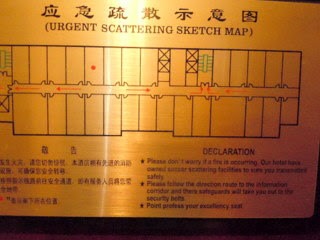 URGENT SCATTERING SKETCH MAP
*Please don't worry if a fire is occurring. Our hotel have owned succor scattering facilities to sure you transmitted safely.
*Please follow the direction route to the information corridor and there safeguards will take you out to the security belts.
*Point profess your excellency seat.

Be sure to read the title, too. And, I have absolutely no idea what that last line means. None whatsoever, and I’ve been thinking about it for two months. (If you can't read it, click on the image to enlarge it, then click again to enlarge it even more.)

On the blue menu below, near the bottom: on the baby vegetable soup. 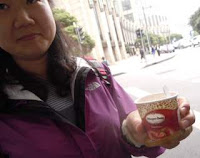 Email ThisBlogThis!Share to TwitterShare to FacebookShare to Pinterest
Labels: China, translations from Chinese