The China Journals, Chapter Six: Ghosts: Past, Present, and Future

Dignitaries are gathered in Oslo today—it’s Friday in Oslo—to honor the recipient of this year’s Nobel Peace prize. When his name is called, though, the winner will not rise from his chair to accept it. Neither will his wife, nor anyone else representing him. 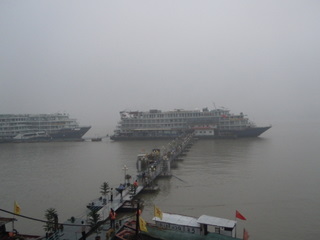 Cruise boats on the Yangtze River.

Our tour group is in a large city in the interior of China and we are listening to a university professor’s lecture on Chinese history. She discusses the long line of Chinese emperors, the many wars, and eventually arrives at the current times.
The topic of Mao Tse Tung and the Cultural Revolution seems to be presented in an honest and forthright manner. The professor speaks of the millions of Chinese starved and killed during World War II, and of how Mao ordered the destruction of many cultural artifacts.
The educated were sent to be reeducated. Her own father, a philosopher, was sent to the countryside and trained to be a farmer.
Then she speaks of today’s situation.
Rather than communism, the professor avers, China’s form of government is “socialism with capitalism.” The lecturer says that “generally speaking” the government is doing a good job for its people. They have a better standard of living, sufficient food, and happy children.
“But, the more we have, the more we complain,” she says wryly. And then she says that the Chinese people have freedom of speech.

When his name is called to accept the Nobel Peace price, the winner will remain right where he was yesterday, and the day before, and the months before that. Liu Xiabo is in a prison cell in China, one year into an eleven year sentence for “inciting subversion of the state power.” His wife is under house arrest, and other family members are not allowed to leave China.
*** 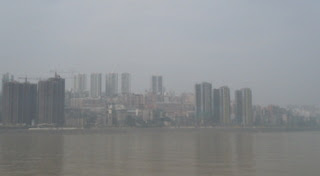 One of many cities along the Yangtze.

A couple weeks after the history lecture, I am dawdling around in my stateroom aboard the Victoria Cruise Lines boat. We are cruising down the Yangtze River and, like everywhere else in China, the landscape is partially obscured by the ever-present smog. In some places, smoke from burning agricultural debris adds to the pallor.


We pass numerous cities perched on the steep hillsides. They appear like ghost cities because of the smog, but they are all around twenty years old, built after the damming of the river and the resultant flooding of the middle and upper Yangtze.
The TV is on in my room, tuned to the only English-speaking channel which is CNN Hong Kong. I hear a news anchor talking about up-coming stories in the next segment. One of those is the announcement that Liu Xiaboo of China has been named winner of the Nobel Peace price. I glance at the banner headlines scrolling across the bottom of the screen and read, “China government outraged at the [news]….” 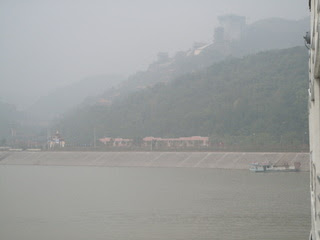 I listen, waiting for the story. Reception is lost. I don’t think much of it as our boat occasionally loses reception as it passes through the gorges and mountains. Later that day the same thing happens—always when I expect to hear about the award. I mention this at dinner, and others agree with my assessment: China is blocking that particular story. Our guide is dining with us. She has never heard of Liu Xiabo.
The next day, the banner crawling across the bottom of the screen reads: “China calls (the award) ‘blasphemous.’” The news presentation of the story continues to be blocked. 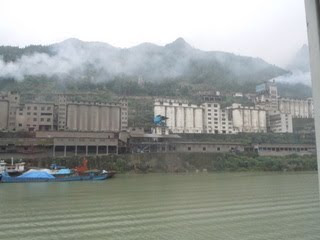 The Nobel committee decided to place a chair at the ceremony, a symbol of the honoree who is not allowed to attend this ceremony. Xiabo has long criticized his government, but advocates peaceful change by degrees, stressing that it will take generations of ever-increasing freedom for the people to adjust. He is a strong advocate of human rights.
Xiabo, 54, also was accused of participating in the 1989 student protests in Tianamen Square, during which numerous students were killed and many arrested. Others say Xiabo was out of Beijing when the protests started, but that he hurried there and tried to get the students to disband.

We are rushed off to lunch after the university professor completes her talk. I pause long enough to ask a question. “You say you have freedom of speech,” I say, “but are you aware that your government is blocking access to certain Internet sites?” I did not know then about Liu Xiabo, but am thinking of the fight China is having with Google, and my own inability to access this blog from anywhere in China.
“Well, yes” she responds, “The government does block some sites where people might write anti-government things, but every government needs to censor some things, otherwise it cannot continue to exist…” 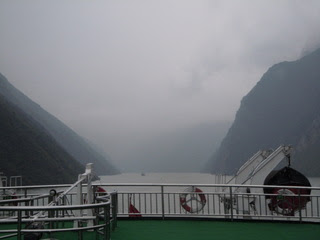 
As I write this I am hearing from Wikileaks about the lies our own government has told us about the release from prison of the Lockerbie bomber. And here is the conundrum: which is the worse crime against its people? Blocking access to certain information, or lying to its citizens?
Posted by Gullible at 12:52 AM