A Winter Day in December

They're good for me--the occasional days I deliver the US mail as a substitute carrier. They get me out of the house and provide reasons to talk with someone other than Pablo parrot.

They also give my camera a workout. 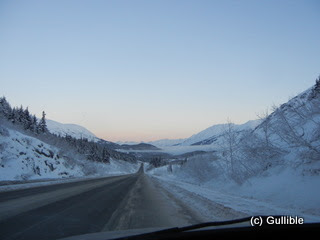 This is between Moose Pass and Hope, a seven percent hill that affords a great view of the Sixmile Creek valley, the Hope cutoff, and the mountains beyond. This shot and the one below are of the quiet placid Sixmile Creek. In the summer, a bit farther upstream, the river has Class V rapids in a NARROW canyon, and is often the scene of rescues. 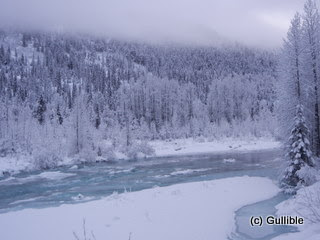 The trees are still frosted in snow from a blizzard last week, added to by cold temperatures that formed hoar frost.

I'm almost to Hope now. This is looking towards Anchorage and the mountains on the other side of Cook Inlet in the distance. The lighting and underlying fog make the mountains appear twice as high as they are. 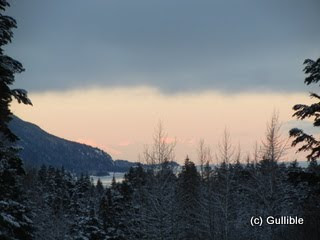 The central part of Hope village lies in this valley. Morning sun (near noon) has found a way through a mountain valley, under the fog. On the way out of town now, delivering mail along the way. This is Turnagain Arm at high tide, chunks of freshwater ice floating on the salt water. 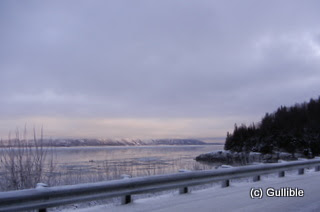 This is the Kenai River where it flows through Cooper Landing. There's a bald eagle sitting on a branch near the top of the tree. A few more were in trees upstream. 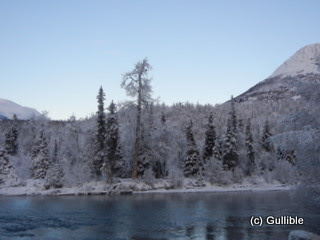 And everyone was looking for lunch in Kenai Lake where Kenai River begins. These swans winter over. 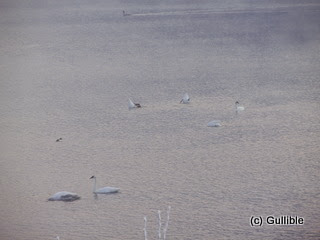 Directly across the neck of the lake were three fishermen, but only one is pictured here. 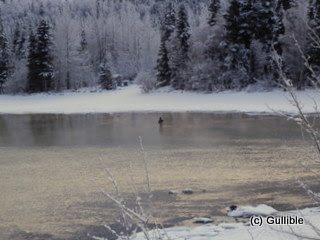 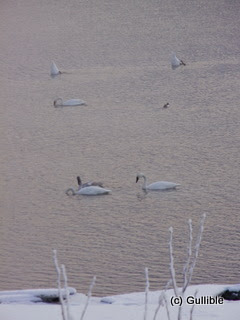 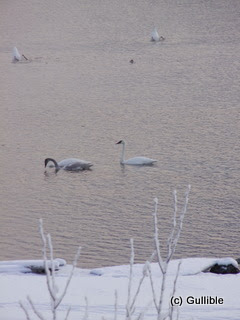 The gray swan in the foreground is this year's cygnet, still in its camouflage coloring.
Posted by Gullible at 12:49 PM