The Feel of a Book in My Hands 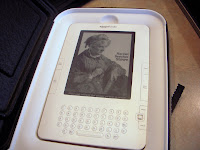 I love my Kindle. I no longer use half my luggage weight allowance on books. My hands don’t get sore holding a hardback or paperback book propped on my tummy as I lie in bed. I can hold it in one hand. I can read it in bright light.

I have more than a hundred books on it, plus a free word scramble game to which I am addicted. I excuse the long hours I spend playing it as one of those mental exercises the doctors suggest you do so you think you’re holding dementia at bay. You know, the “use it or lose it” thing.

There are two things I don’t like about it. The first is that flight attendants make you turn it off when the plane is talking off or landing. C’mon. I read during those events so I can pretend they aren't happening.

The number two thing is this: Some books I have on my Kindle deserve to be held in my hands and loved forever, with a reserved place on a special shelf for them to live.

Here are a few of those I’ve read in the last year or so:

The Sound of a Wild Snail Eating by Elisabeth Tova Bailey 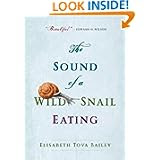 You are confined to your bed with your survival dependent on a caregiver and fate. You are disappearing physically and emotionally as your body consumes itself and your mind vegetates in weariness.

A friend brings a small pot of wild violets, accessorized with a wild woodland snail. You would take the small snail outdoors and release it, if your body could carry you that far. It can’t, and the snail becomes your companion. In the dark of night, when silence is total and sleep is impossible, you hear the sounds of the snail eating. Chomp, chomp, chomp.

With her life thus enriched, so begins a journey of healing, physically and emotionally, with a one-footed mollusk along for the duration. This is no woe-is-me tale of illness, but something much, much more. Read this and you will never again think of snails in the same way.

Forget Rocky. The true underdog story is that of the lazy race horse Seabiscuit as told by Laura Hillenbrand. Now she’s written another story, this one of a world class athlete denied his chance at Olympic medals by World War II, whose spirit kept him alive through the horrors of a Japanese POW camp.

Louis Zamperini, bad boy set loose in track and field, survived 46 days in a leaky raft surrounded by sharks after his warplane was shot down in the Pacific, and then two years in a Japanese POW camp. Unbelievably, he survived and today is 93 years old.

Meticulously researched and written with straightforward prose, this book will stick with you. It will also give you insight into why the decision was made to drop the bombs on Japan, and ponder the once improbable reconciliation of Japan’s relationship with the USA today.

The Immortal Life of Henrietta Lacks by Rebecca Skloot

She had cervical cancer. Doctors at Johns Hopkins hospital took samples for diagnosis during her treatment. What happened after that affects each and every one of us, from the development of polio vaccines, cancer and AIDS drugs, to the HIPPA privacy statements we sign in physicians’ offices, and much more. Researchers around the world have studied the virulent cancer cells of Henrietta Lacks, and millions of dollars have been made by laboratories selling them for research, but Lacks’s surviving relatives cannot afford basic medical care.

The Lost City of Z: A Tale of Deadly Obsession in the Amazon by David Grann 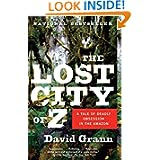 Obsession. Men, and women, have died for their obsessions. This true tale of exploration and survival in the jungles of the Amazon tells of explorer Percy Harrison Fawcett, a member of the Royal Geographic Society, and his early 1900’s search for the rumored El Dorado—a city called “Z.”

Fawcett never returned and the author goes in search of what happened to him. This is the kind of book that should have a combination lock on the final pages that you are not able to open until your read each and every page up to that point, because you will be so tempted to peek. Ranks right up there with Endurance, the tale of the Shackleton expedition to the Antarctic by Alfred Lansing.

The next two I am content with having on the Kindle, and they are good reads. 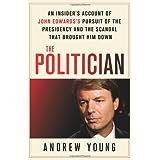 This story has it all—sex, politics, scandal and betrayal. The principal subject is a charismatic man on the brink of the U.S. Presidential nomination, a man with a hidden, dark side who would be president .

This is the stuff great novels are made of, except this one isn’t a novel. It’s true, or true as the author saw it. Andrew Young was a trusted assistant to John Edwards when the latter began his run for the presidential nomination. And it was Young whom Edwards conned into taking the fall for an affair with Edward’s videographer, and the subsequent child. 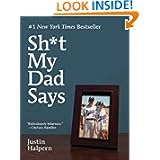 What would you do if you had a dad who said things like this?

ON THE DEATH OF OUR FIRST DOG
He was a good dog. Your brother is pretty broken up about it, so go easy on him. He had a nice last moment with Brownie before the vet tossed him in the garbage.

ON MY BLOODY NOSE
What happened? Did somebody punch you in the face?!... The what? The air is dry? Do me a favor and tell people you got punched in the face.

ON THE MEDICINAL EFFECT OF BACON
You worry too much. Eat some bacon... What? No, I got no idea if it'll make you feel better, I just made too much bacon.

Funny, profane, heartbreaking and heartwarming, the author’s touch with his father’s words is just right. This is what it would be like to be raised by a Marine drill sergeant, one with a heart full of love and wisdom--in spite of it all.

I've left out a bunch, like The Help, Sarah's Key, and the one that absolutely turned my writing life on its head: The Book Thief.